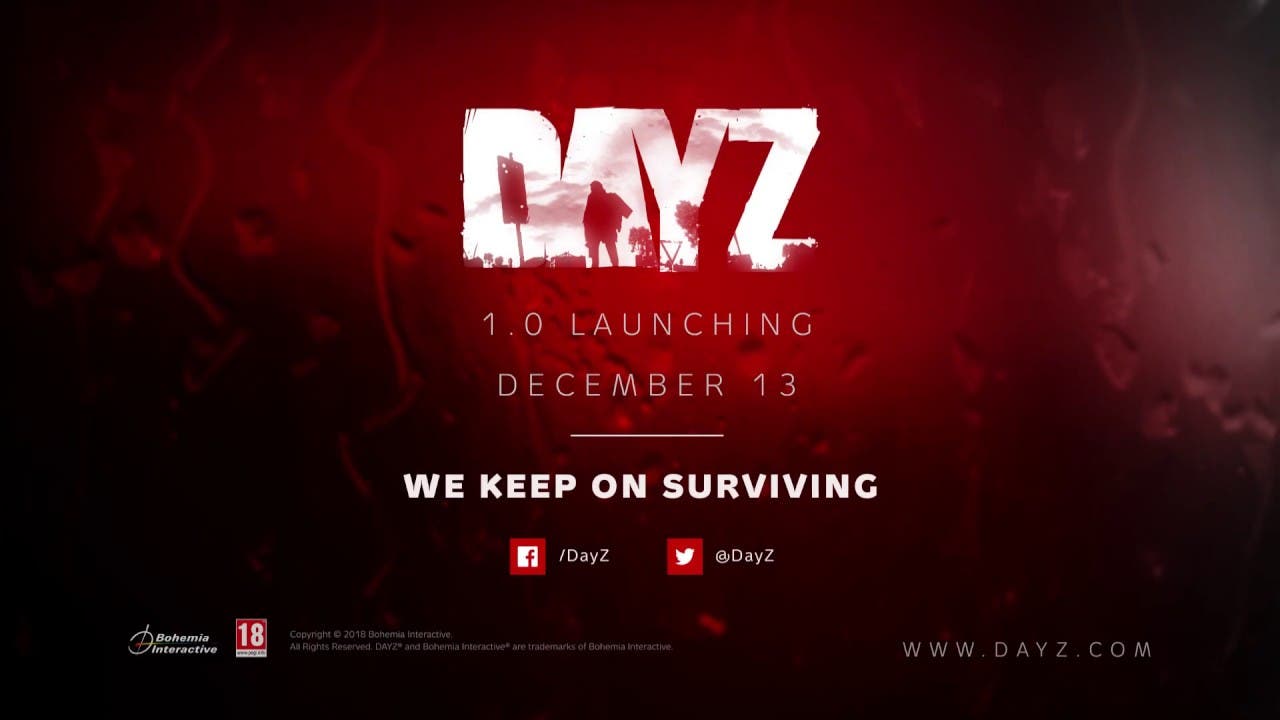 DayZ releasing in full onto Steam with version 1.0 on December 13th, PlayStation 4 in 2019

Bohemia Interactive today announced that DayZ, the open world, online survival game, is launching worldwide on PC on December 13th. Originally releasing as a Steam Early Access title in 2013, DayZ has attracted over 4,000,000 players and received a complete technology overhaul during its 5 years of development, along with numerous new features.

The post-soviet country of Chernarus is struck by an unknown virus, turning the majority population into frenzied infected. Fighting over resources has bred a hostile mentality among survivors, driving what’s left of humanity to collapse. You are one of the few immune to the virus – how far will you go to survive?

DayZ is an unforgiving, authentic survival experience. Up to 60 survivors on a server engage in a completely unscripted gameplay scenario with no goals given, except for one: to survive as long as they can, by all means necessary. There are no superficial tips, way-points, built-in tutorials, or help given to players. Every decision matters, and every mistake can be lethal. If you die in DayZ, you lose all your character progress and start over, as the game features a permadeath concept.

In DayZ, hostile player interactions – or simply just struggling through severe weather – can easily turn into intense, nerve-racking moments where you experience very real emotions. On the other hand, meeting with another friendly survivor in DayZ can lead to a true friendship that lasts a lifetime.

In November, Bohemia Interactive released the Stable BETA update for DayZ. This was overall the biggest update to the game, with over a year’s worth of development dedicated to it. Along the way, players subscribed to the Experimental branch were able to witness major engine level changes and gameplay improvements.

Since the BETA update delivered all the core elements that make the DayZ gameplay, the development shifted focus to bugfixing and generally improving the available content and features for the upcoming 1.0 update. With the help of community feedback and bug reports, the developers have identified over 400 issues since the BETA release, and resolved nearly 900 of them in total(including both the new issues, and ones reported before the BETA).

DayZ is also out now in Xbox Game Preview, with the full launch scheduled for early 2019, and is also coming to PlayStation 4 later in 2019﻿.﻿