From the mind of developer David Szymanski and publisher New Blood Interactive, comes the full release of DUSK after two years in Steam Early Access. DUSK‘s release date is shared with DOOM as it celebrates its 25th Anniversary, which is no coincidence. DUSK‘s unsettling atmosphere, familiar surroundings, and occult phenomena are the recipe of what makes a great game. We are in a retro first-person shooter renaissance, and it begins with DUSK. 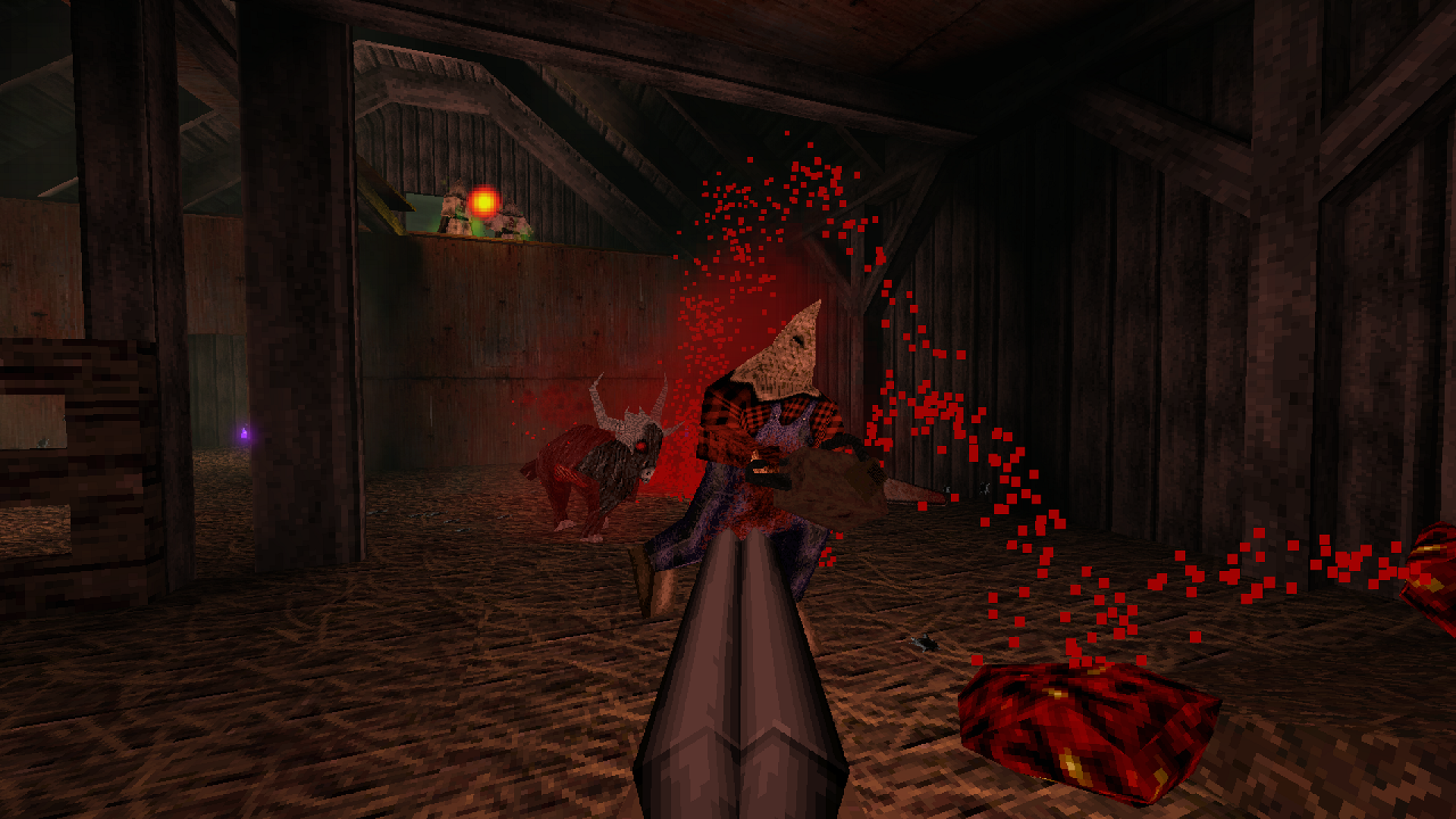 In starting DUSK, it doesn’t bombard you with logos, but rather a fake DOS prompt (aptly titled fakeDOS) that loads the game and all the elements. It’s not apparent from the main menu, but there’s an incredible amount of customization to make DUSK look and feel how you want. You can make it look pixelated like DOOM or look like the game is running on 3Dfx Voodoo chipsets like Quake. Visually, DUSK also recalls Half-Life, Heretic, and Redneck Rampage – no 90s FPS is off limits. You can also tweak colors, field of view, viewport, and other odds and ends that suit your needs. It has a ridiculous amount of things to tweak that only the games that have come before could have been capable of.

There are five difficulties to play DUSK on. And the rules of 90s first-person shooters is followed stringently. For example, health does not regenerate, but you must collect medkits in order to be restored to full health. Progression through a single level is gated by requiring color-coded keys to access new areas. So you’ll find red, blue, and yellow keys strewn about a level in carefully placed areas. Lastly, weapons collected during an individual episode will not carry over into the next. The game has many guns, and you’re expected to use them. Just use them wisely. 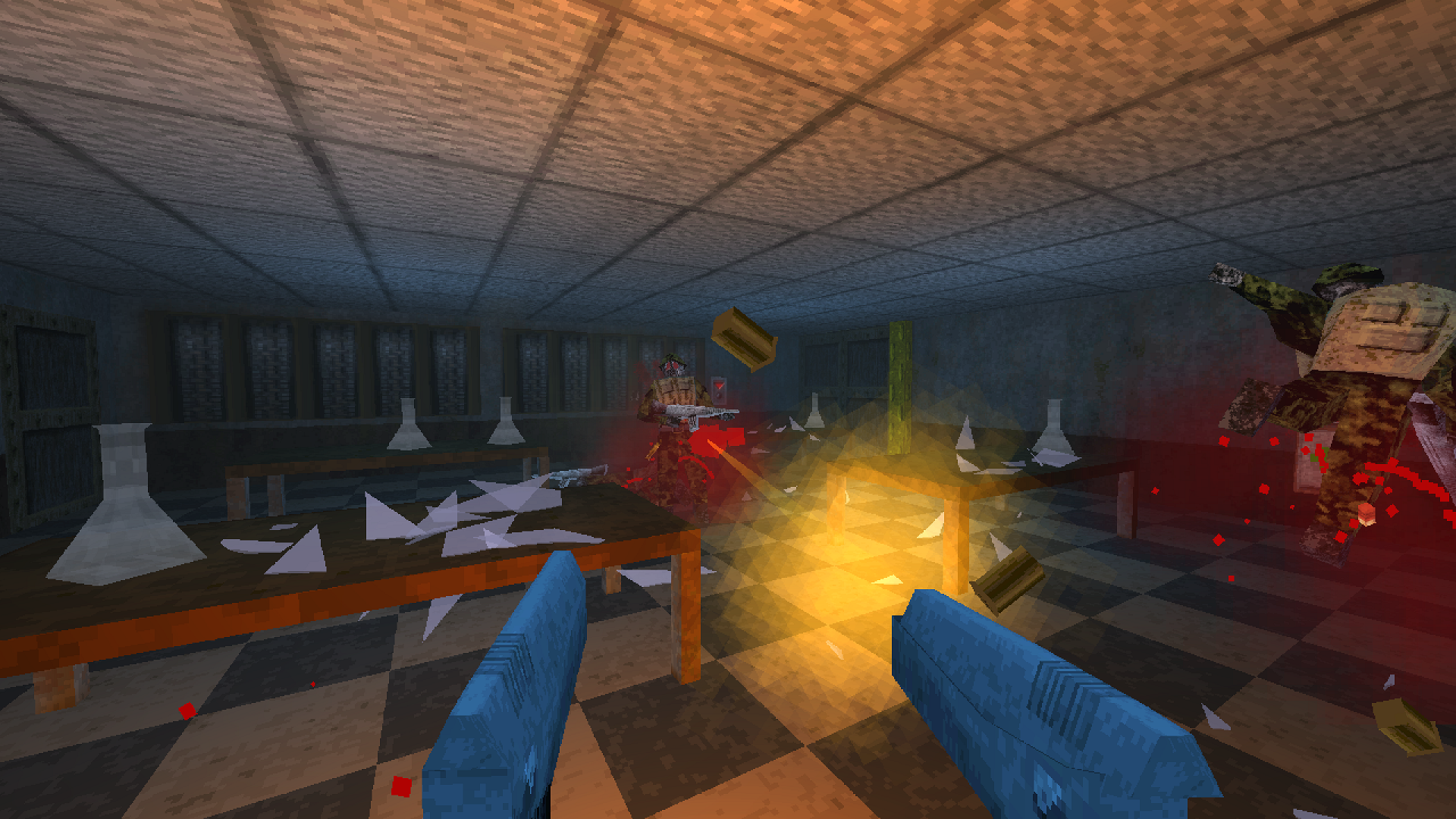 DUSK‘s difficulty and gameplay feel really dialed in. This pairs well with the ability to make hard saves, as well as quicksave when you want. There are three episodes within DUSK, which tells a complete story and is full of memorable levels like an abandoned farm, an urban ghost town, and even a level inspired by M.C. Escher paintings (it’s called Escher Labs, even!) It wasn’t until episode 2 where I saw increased challenge and level of complexity navigating the levels. Depending on the level, I found myself wandering in circles or getting lost in general. The game relies on cramped spaces too often, and with a narrow flashlight in dark hallways, led to some motion sickness I wasn’t fond of. This didn’t happen often, so it’s hardly a complaint, but something for those susceptible to be aware of. DUSK‘s level design successes lie in the fact that I was able to skip an entire boss fight by grabbing the required key and rushing to the exit, or episode three revisiting prior levels with a new spin on things. These are levels begging to be explored when all the enemies are dead to uncover every secret.

There’s a lot of weapons in DUSK, and nothing you haven’t really seen before between DOOM and Quake, but there’s little tweaks here and there that makes the game stand out. When picking up a weapon of the same type, it makes it akimbo, while still allowing you to select a single version of that weapon. Shooting the shotgun has a lot of style as you’ll twirl them with every alternating shot. You can rocket jump with the rivet gun, and block shots with the sickles. Later on, you’re given a sword which can backstab silently when you’re at full health. All the weapons look great, and are a joy to use – though, the cross-bolts kinda look like penises? 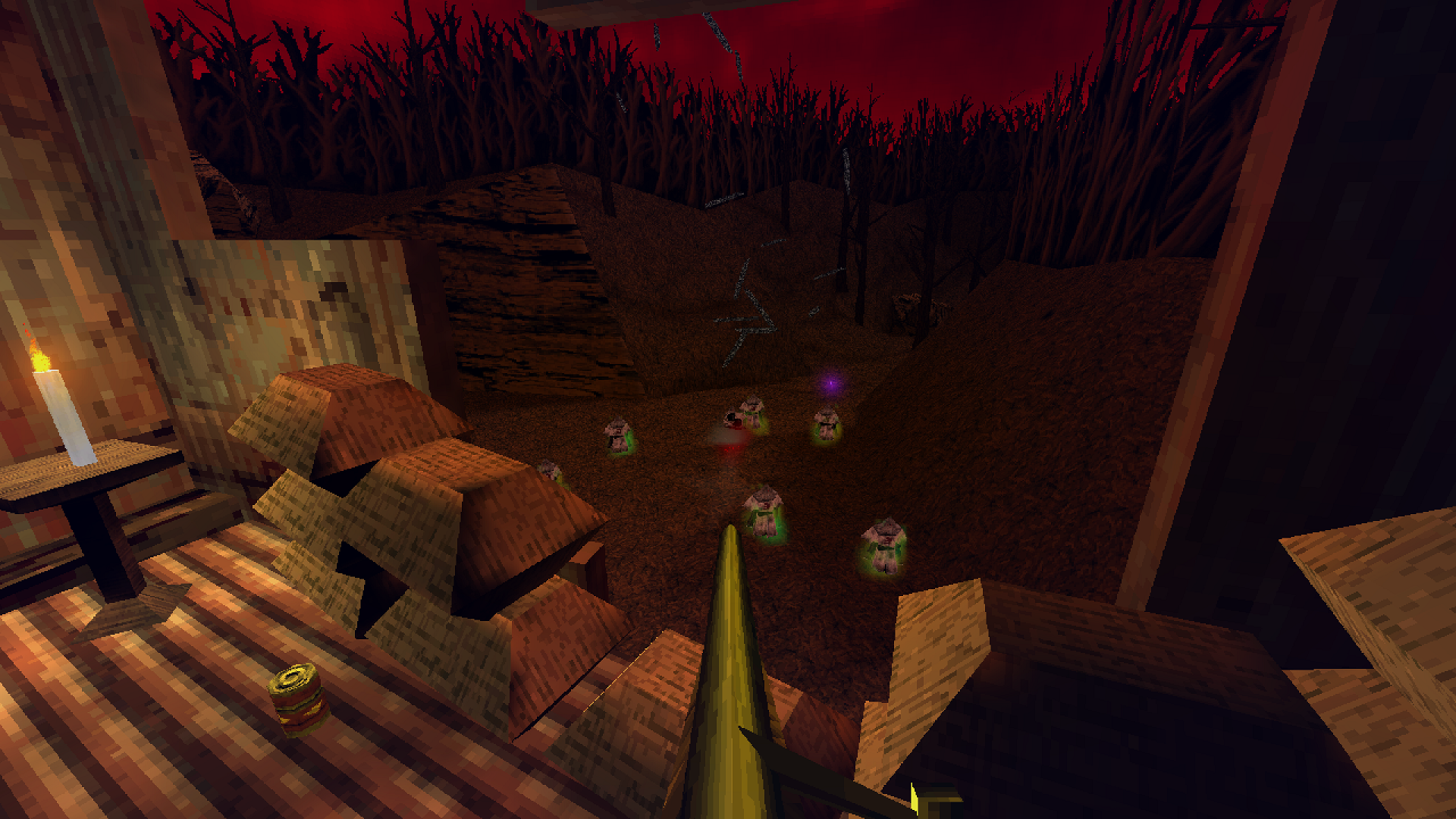 There’s some great gameplay decisions and considerations. There’s no fall damage, so you’re able to maintain momentum and keep up the flow of combat without having to consider such a trivial thing as dying from a large fall. DUSK‘s movement is incredibly fast, just like you remember, but perhaps at two-times speed. DUSK has additional systems for the sake of it, even if they don’t provide a gameplay benefit. For instance, you can pull out a cigar and smoke it – it doesn’t increase or decrease health, it just exists. Like a good FPS there’s no reloading, but if you press ‘R’ you’ll twirl your guns. When you jump, if you flick the mouse forward or backward, you’ll do a flip. It’s somewhat disorienting at first, but feels extremely cool to do. I even flushed a dude down a toilet, how is that not an achievement?

Enemy variety is excellent, varying from rural cultists to hellish invisible goats. Every enemy has a unique look, health, and movement that you learn over time to best deal with them. Though, the wendigos can go to hell, they provide genuine scares upon the first and thirteenth arrival. DUSK even has moments of AI autonomy whereby enemies will fight each other and hurt each other if they get in the way of their projectiles. It’s things like this that continually make the entire experience a joy.

As mentioned before, DUSK has a lot of secrets to find. You’re given details at the end of a level what you got, or didn’t get during your run. So for completionists, you can return to a level and work to find all there is. And it’s great to clear a level and just seek out everything that’s been handcrafted for these levels. DUSK even allows the use of cheat codes, custom to the game. And the best part is that they don’t disable achievements, confirmed by receiving an achievement when used for the first time. It’s clear the designers want you to enjoy the game how you want, and not penalizing you for your decisions, so long as you enjoy it – and boy do I.

Aside from the campaign, there’s an endless mode to play. Which is to say, it’s a survival mode asking you take on waves of enemies for as long as possible. It’s a really neat challenge taking place on a specific map from one of the three episodes of your choosing. This is where Andrew Hulshult’s music really has a place to shine. It comes and goes through the campaign in a natural way, but the music here is of such high tempo, it really works well in endless mode when trying to go the distance. 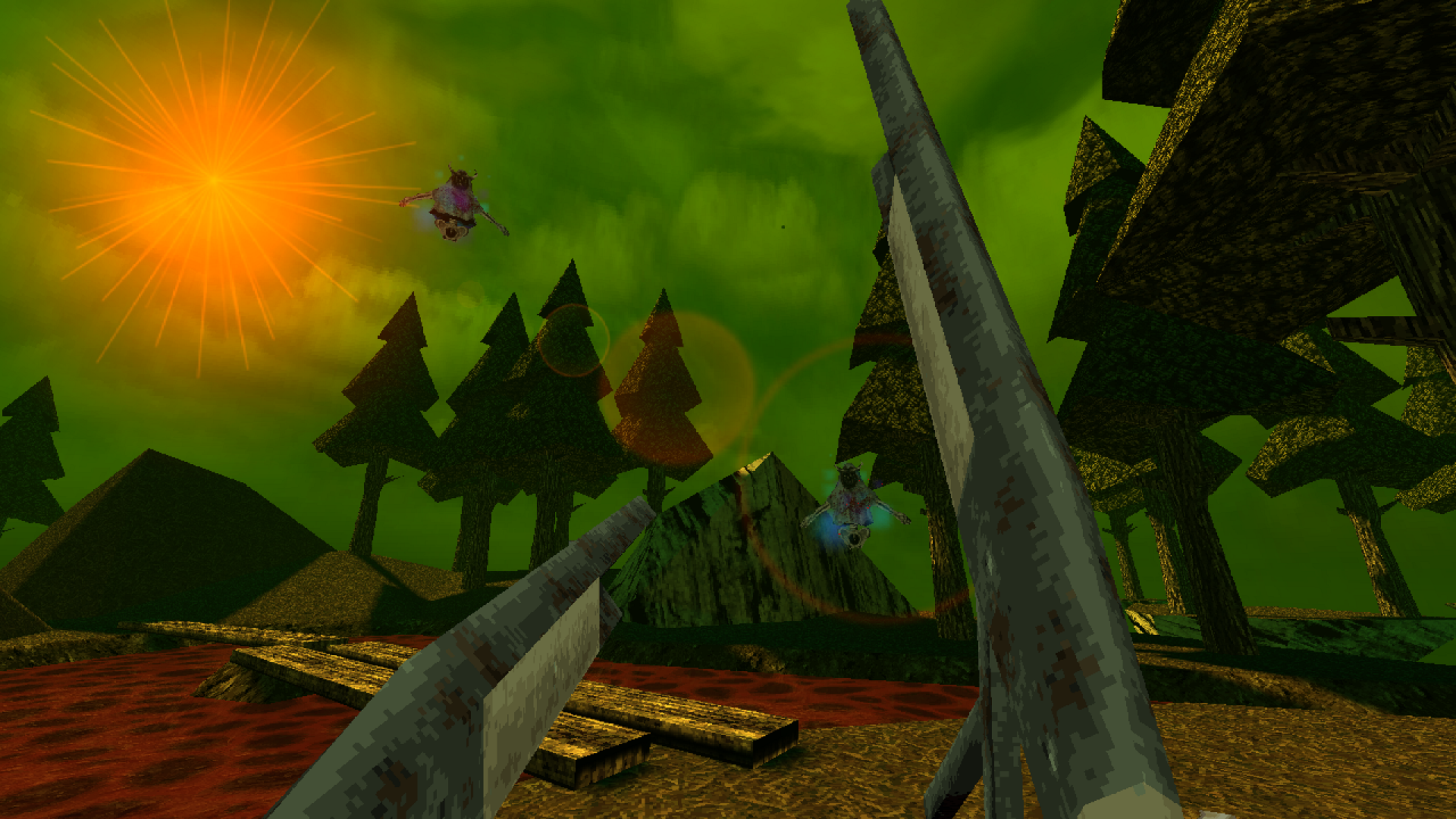 DUSK‘s own version of multiplayer called DUSKWORLD is more or less deathmatch for up to sixteen players. There’s a warm-up lobby for practice, then after a countdown goes into the real game. After a few short minutes, the person with the most kills wins. This continues until you quit or the server/host shuts down. The multiplayer is solid, but my least favorite mode to play. In my time playing it in Early Access and even in the final review build was met with strange lag and skittering players even when pings were low. When it was working as intended, it’s extremely fast-paced and features no “safe spawning”, meaning that upon coming back from a recent death, you could die right away due to splash damage or someone being in the right place and the right time.

Customization is continued into DUSKWORLD. Not only can you customize the visual effects like the main game, but you can select from the game’s roster of player models, even the dog in a cage on wheels. Then you can set unique colors that make you stand out (or hidden entirely). I’d like to see the multiplayer expand with more modes like capture the flag and team deathmatch. For what it is, it’s something fun to dip into. But DUSK‘s singleplayer as far more engaging than DUSKWORLD is right now – and by comparison, DUSKWORLD seems unfinished. 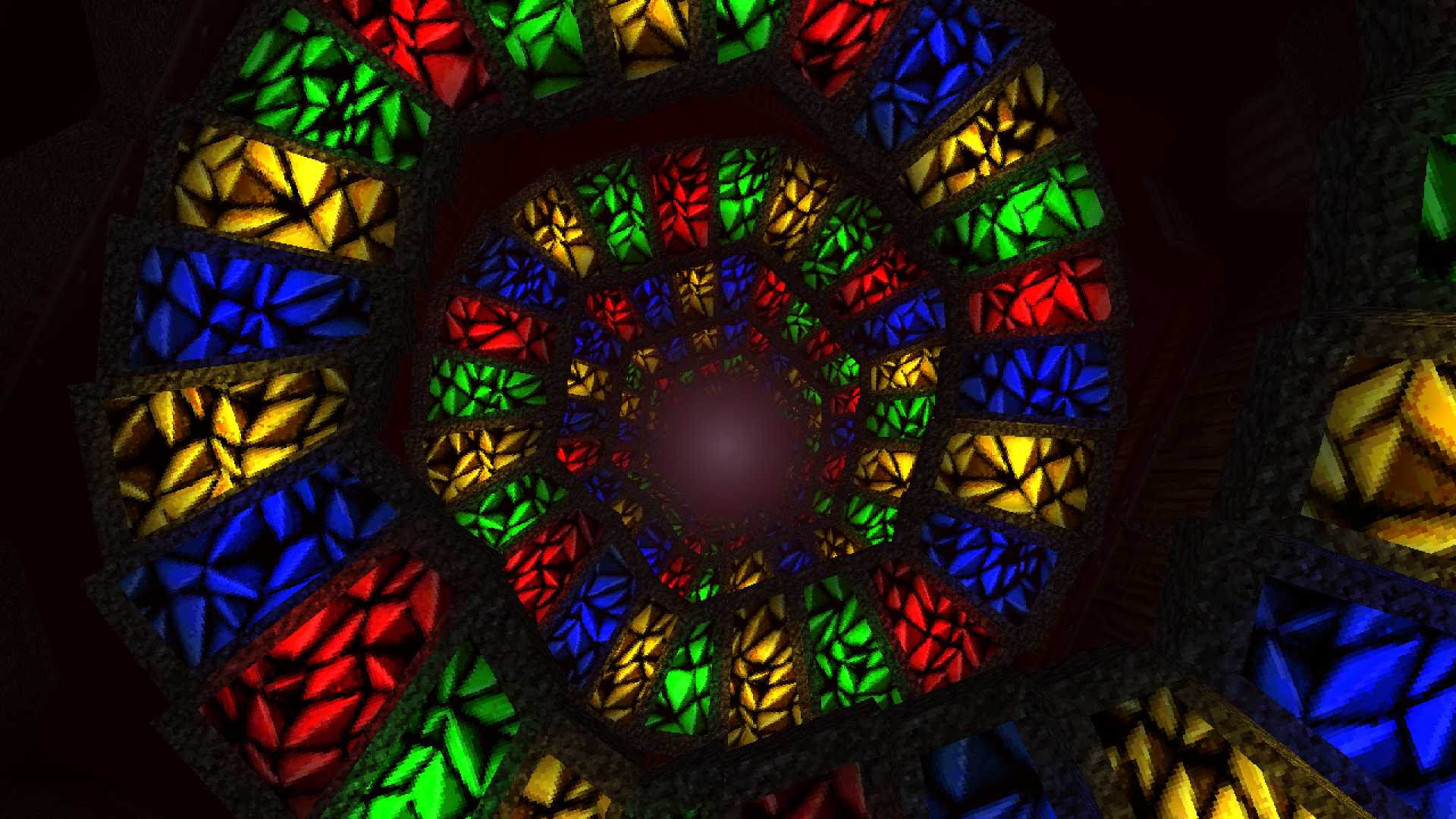 DUSK looks, feels, and acts like a classic first-person shooter from the 90s, but doesn’t rely on anything but itself to impress you. From the first moment when the ominous voice saying “KILL THE INTRUDER“, DUSK sets a tone that it delivers every step of the way. The DUSKWORLD multiplayer is mildly disappointing, but doesn’t take away from what an amazing offering the campaign is. DUSK revives the first-person genre with a customizable retro aesthetic, a head-banging soundtrack, and levels that rival modern first-person shooters; DUSK is the FPS dreams are made of.