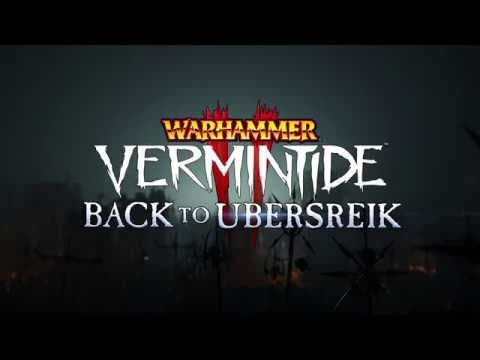 Warhammer Vermintide 2 DLC, “Back to Ubersreik” is out today for PC

The Warhammer Vermintide 2 – Back to Ubersreik DLC will bring the player back to the original Vermintide, and it’s most popular levels. Players of the original game will feel right at home, but will have to face new challenges, and meaner enemies. If you haven’t played the original game, this is a great way of expanding your knowledge of what happened before our Heroes reached Helmgart.

“Three levels are included in the Back to Ubersreik DLC – officially. There might be more content…” hints Bardin Goreksson, Hero.

Three of the favorite stages from the original Vermintide game have been overhauled and have never been more beautiful. Unfortunately, players will not have time to admire the levels, as Chaos join the Skaven to make sure they are not on the losing side this time around.

“Fatshark is taking you back in time, and then changing the history with amped graphics, and new enemies” says Martin Wahlund, CEO Fatshark. “Besides being very happy to introduce newer Heroes to Ubersreik, I am personally very much looking forward sounding the horn in the Magnus Tower.”

Back to Ubersreik DLC Xbox One and PlayStation®4

Warhammer: Vermintide 2 – Back to Übersreik DLC is available on PC today. Xbox One and PlayStation®4 release date will be announced later this week.

Back to Ubersreik DLC feature