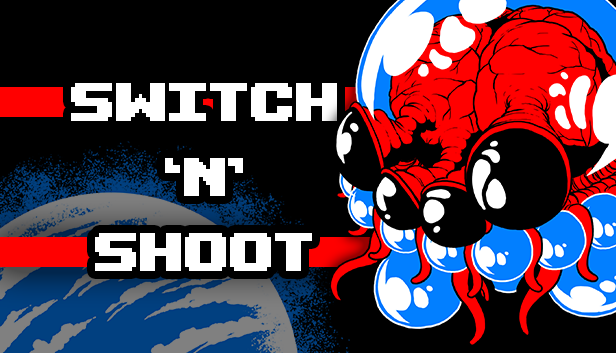 Switch ‘N’ Shoot feels as if it came straight out of the golden age of coin-op arcade cabinets. I could easily have seen myself playing this exact game at my local arcade in the late ’80s or even at a Chuck E’ Cheese’s in the early ’90s. It’s got that classic look and has that addictive gameplay to boot. It falls into the same vein as those arcade classics that are simple to understand but difficult to master, and it’s found a home on the Nintendo Switch.

As I mentioned earlier, Switch ‘N’ Shoot looks and plays like those 8-bit arcade shooters of the past. The game field is vertical while your ship steers across the bottom of the screen. Enemies come flying at you from the top as you try to shoot them all for high scores. Speaking of scores, I found there to be no name input. Instead, the game comes with a ton of preloaded names for pilots they will assign you at random. I would have liked to have seen a secondary option for name input at least. The game also doesn’t use any online features, so there’s not even a way to compare scores with friends. Regardless, it’s a minor issue of mine; I wish they allowed for name entry and friend scores.

Switch ‘N’ Shoot’s defining characteristic is in its controls. You’re moving and shooting with a single button; you could even use the touch screen if you so desire. Since you change direction every time you fire a shot, it creates a sense of real urgency as those enemies start coming at you fast. It challenged my reflexes and tested my judgment in a way that is satisfying and not frustrating. I found myself making quick decisions on whether I needed to risk shooting an enemy or forget it and dodge. I have had a blast playing this and my recommendation before you even get to the end of this review, you should play it for yourselves. 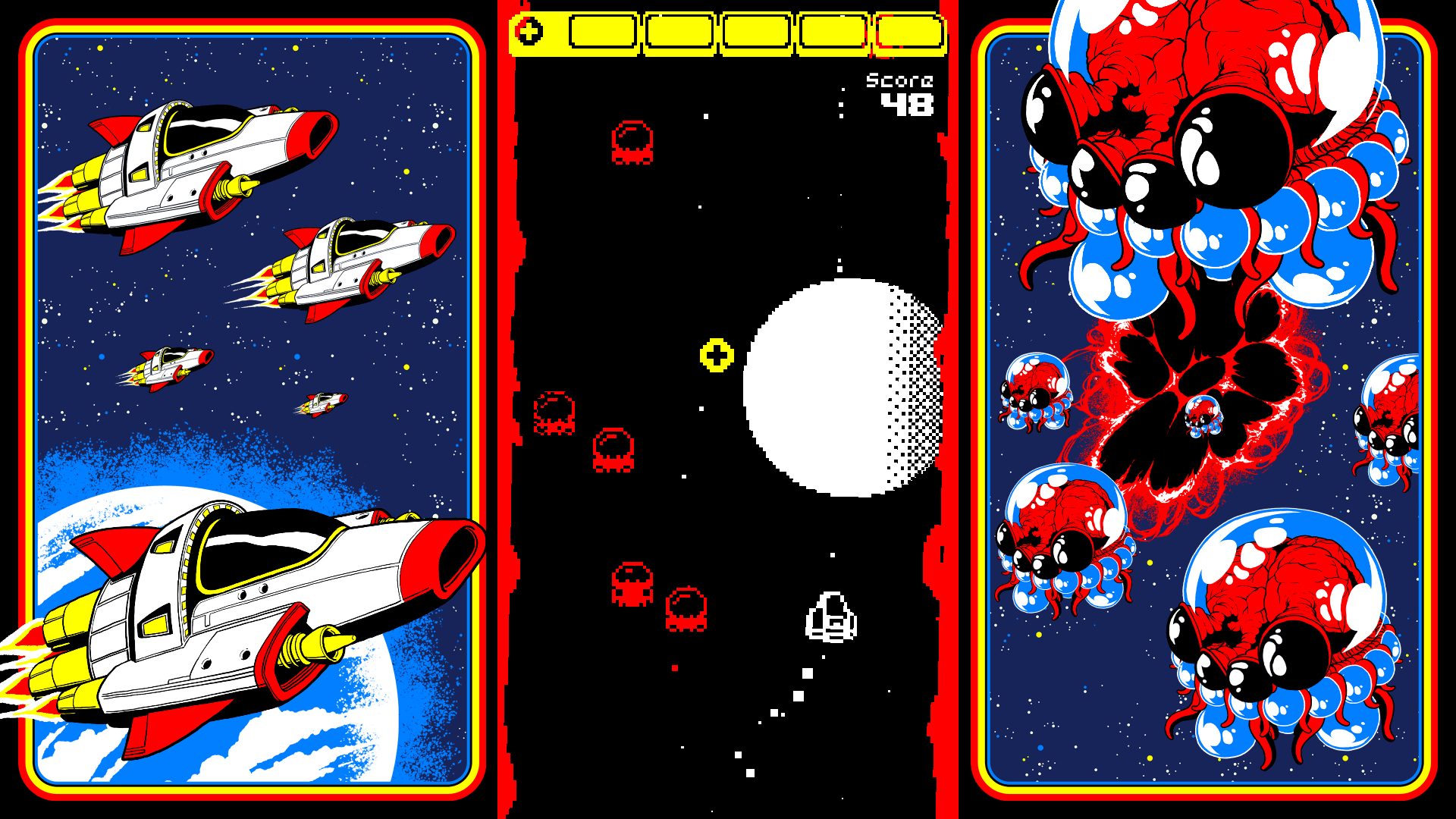 The mechanic is challenging; trying to aim at the enemies requires you to think about your positioning. I found myself using a tactic of rapidly pressing the button to fire a few shots in quick succession so I could cover a general area, but also counting how many times I shot so I could end up moving in the direction I wanted. The screen has endless left/right movement so you could just let it endlessly scroll. It creates some nifty strategies and can save your hide if you start to get peppered with enemies on one side. The enemies here are pretty generic and they’re only worth one point per kill. 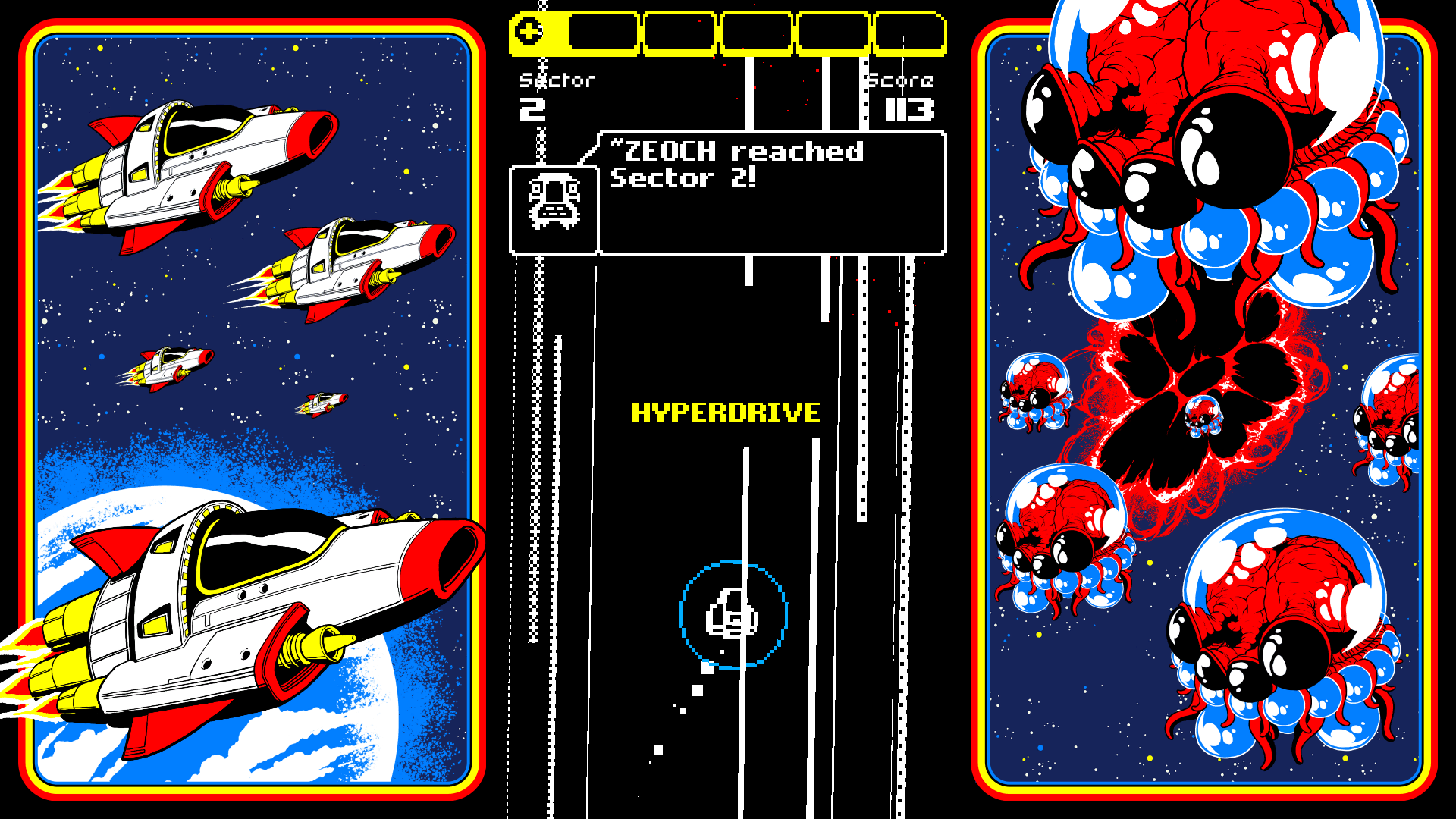 To progress, you need to collect the weapon upgrades. Similar to the game Gradius, you’ll collect icons that will increase your weapon bar. As you level up the bar, your shots will become stronger. Bullets become wider and will eventually expand into a triple-shot. The final upgrade is a steady laser beam that unfortunately will also throw up barriers to your left and right, making the playfield a tight corridor. Collecting the next powerup will toss you into the next stage, earning you a bonus to your score. The game will throw some helpful items like shields your way giving you a chance on some of the harder stages. If you miss a powerup, you’ll find yourself making things even harder; your ship’s weapon level will drop back down by one. So it’s crucial for you to grab each powerup you see else your firepower will suffer and make the stages that much harder. 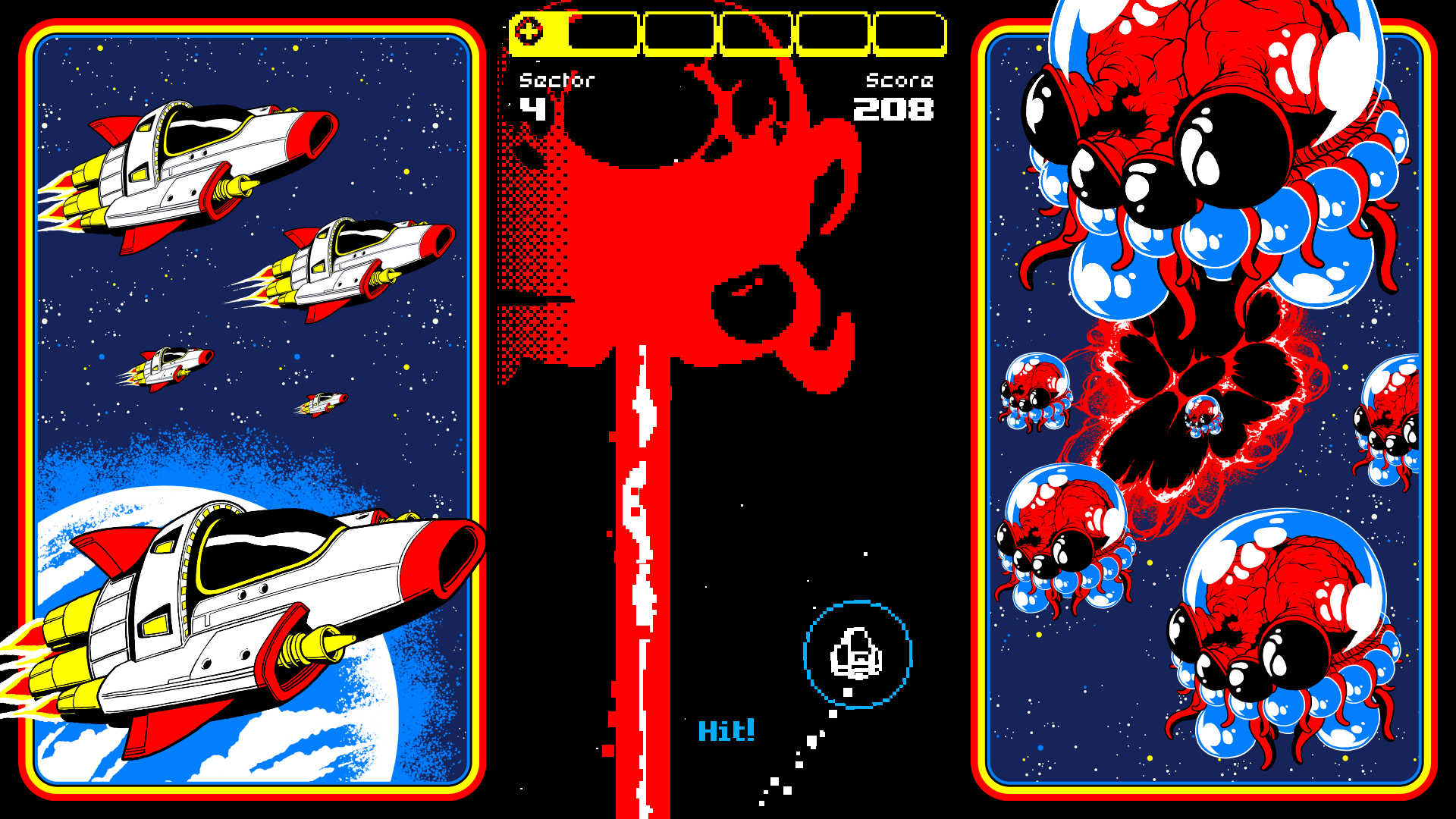 If you find yourself crashing into an enemy or any barriers, your game is over, and you start again. What makes or breaks a game like this is the downtime between death and restart, and I’m happy to report that once you die you get right back into the action within a second or two. The quick restarts are what end up making this game addictive. If you’re not careful, you’ll lose an hour without realizing it, thinking that each concurrent run will be the one where you get top billing on the scoreboard. I mean, I did.

I played mostly in handheld mode and with the screen horizontal. You’re able to play Switch ‘N’ Shoot with the Switch held vertically, and it works very well! My only gripe playing like this is the weight distribution of the Switch is now off, and it wasn’t comfortable for me to hold. I even kept accidentally hitting the shoulder buttons that would change the color palette of the screen. Which by the way, they give you some customization options around changing your color palette. It’s a nice touch to let you coordinate a palette pleasing to your eye. If you do hold the Switch horizontally, it will place some nice ‘80s arcade cabinet artwork on the left and right of the screen, but you won’t be looking at that since you need to focus on what’s going on anyway.

So with that out of the way, I do think this is something every switch owner should have in their library. It’s very pick up and play, it’s great for a quick session, or wasting the day away. It’s a great travel game and fun for even pass-and-play with friends or family. If you’re looking for a great title to keep on your Switch home screen, you can’t go wrong with Switch ‘N’ Shoot.