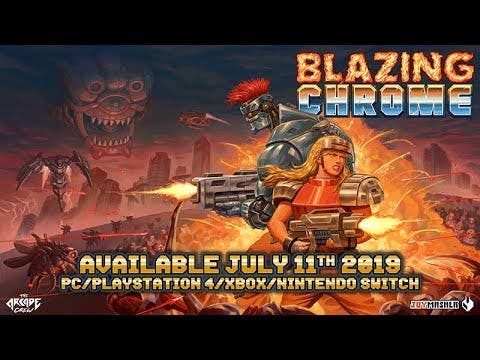 PARIS – July 10, 2019 – Publisher The Arcade Crew and developer Joymasher launch the fight for the world’s survival tomorrow in Blazing Chrome, a co-op run-and-gunner that hearkens to the golden age of sidescrolling shootouts. This classically-informed tribute to the arcade era’s finest quarter-munchers is available July 11 for $16.99 on PC, Nintendo Switch, PlayStation 4, and Xbox One.

With a varied arsenal of distinctive weapons, badass pilotable mechs and vehicles, and unlockable characters to help curb the AI army’s ruthless oppression, Blazing Chrome plays the way you remember classic action games feeling. Joymasher’s modern refinements to that satisfying shoot-em-up playstyle will make scrapping hordes of mechanized foes and skyscraper-sized bosses feel as comfortable as getting back on that hoverbike you haven’t rode in years.

To fully prepare for humanity’s near extinction, read up on Blazing Chrome by visiting http://joymasher.com and following them on Twitter (https://twitter.com/joymasher) or Facebook (https://www.facebook.com/JoyMasher).