Arkanoid has seen many variations over the years, and it’s been a while since we’ve seen anything new. The creator of Desktop Dungeons at QCF Design gives us a new take on Arkanoid with Drawkanoid. As the name implies, you draw the paddle to be used to redirect your attacks, setting specific angles to get the desired effect. Drawkanoid takes block breaking in a refreshing, exciting direction that works incredibly well to kick off 2020 in colorful style. 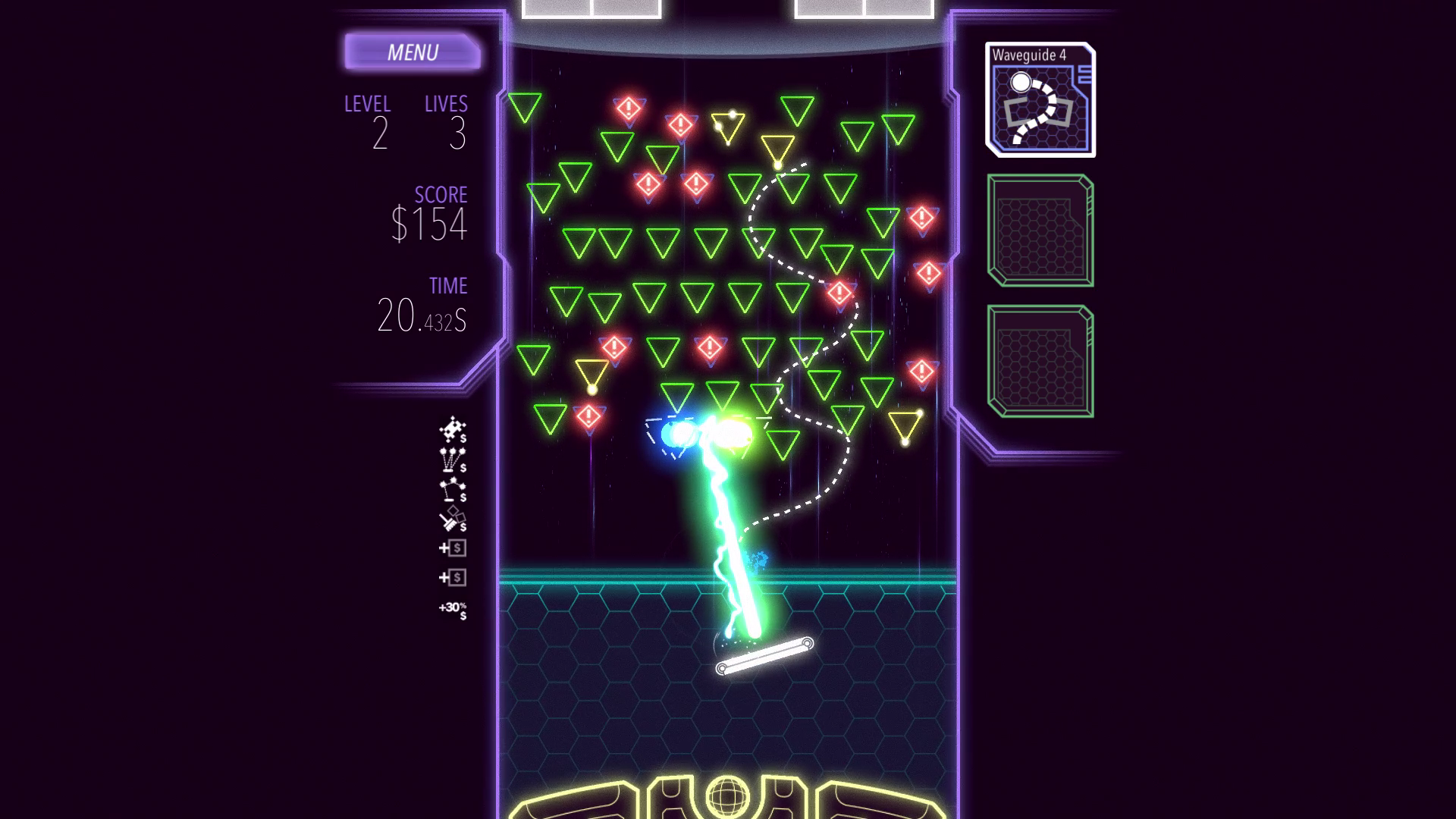 The biggest change that Drawkanoid brings to the table is that you draw the paddle. You draw it in any orientation of a straight line that you wish. So you can make it ricochet or bounce straight up. The game starts paused, with the ball holding in the lower third of the screen. Once you draw the paddle, the game goes zero to one-hundred in an instant. The ball moves fast outside the lower bubble. But once the ball returns, it enters this stasis bubble where it enters bullet-time for you to draw the next paddle. The goal is of course to break all the blocks, once enough are broken, a boss reveals themselves. Once you defeat the boss, you move on to the next level. The pacing of the game goes between fast (breaking blocks) and slow (drawing the paddle), feeling like someone mashing the gas and then stabbing the brake. It’s not necessarily a bad thing, it is a game you feel.

The entirety of the levels you play are procedurally generated. So no single gameplay is alike. Sure, this is something you’ve heard countless times over. But it makes a lot of sense for an Arkanoid-style game. In a traditional arcade game, it is built on memorization. Given that you draw the paddle, it introduces randomness where memorization no longer works. With that said, it’s a game that due to its pacing, quickly upping the tempo, and being so replayable that it’s absolutely worth your time.

Drawkanoid has a single currency to be earned. Earn enough to unlock either passives that have permanent improvements, and actives which let you deploy an ability for a set period of time to use a temporary benefit. It’s ideal to use your power-ups tactically, either a few at once or chaining them together for devastating effects. All active power-ups get recharged through playing, so as you play better, you’ll have your abilities much quicker.

There’s the concept of loadouts in Drawkanoid, where you can mix n’ match your power-ups any way you like.In the early goings, the wide paddle passive upgrade is the way to go, but you’ll quickly be out of space. So as you get comfortable with the game, you’ll eventually swap out these modules of your load for things like homing which targets nearby bricks and stays in the upper half of the game. Or there’s the piercing ball, that penetrates blocks easier to get more done. Being able to find a loadout that works for you is all part of the draw, and you’ll be happy to try out different configurations until you find the sweet spot. 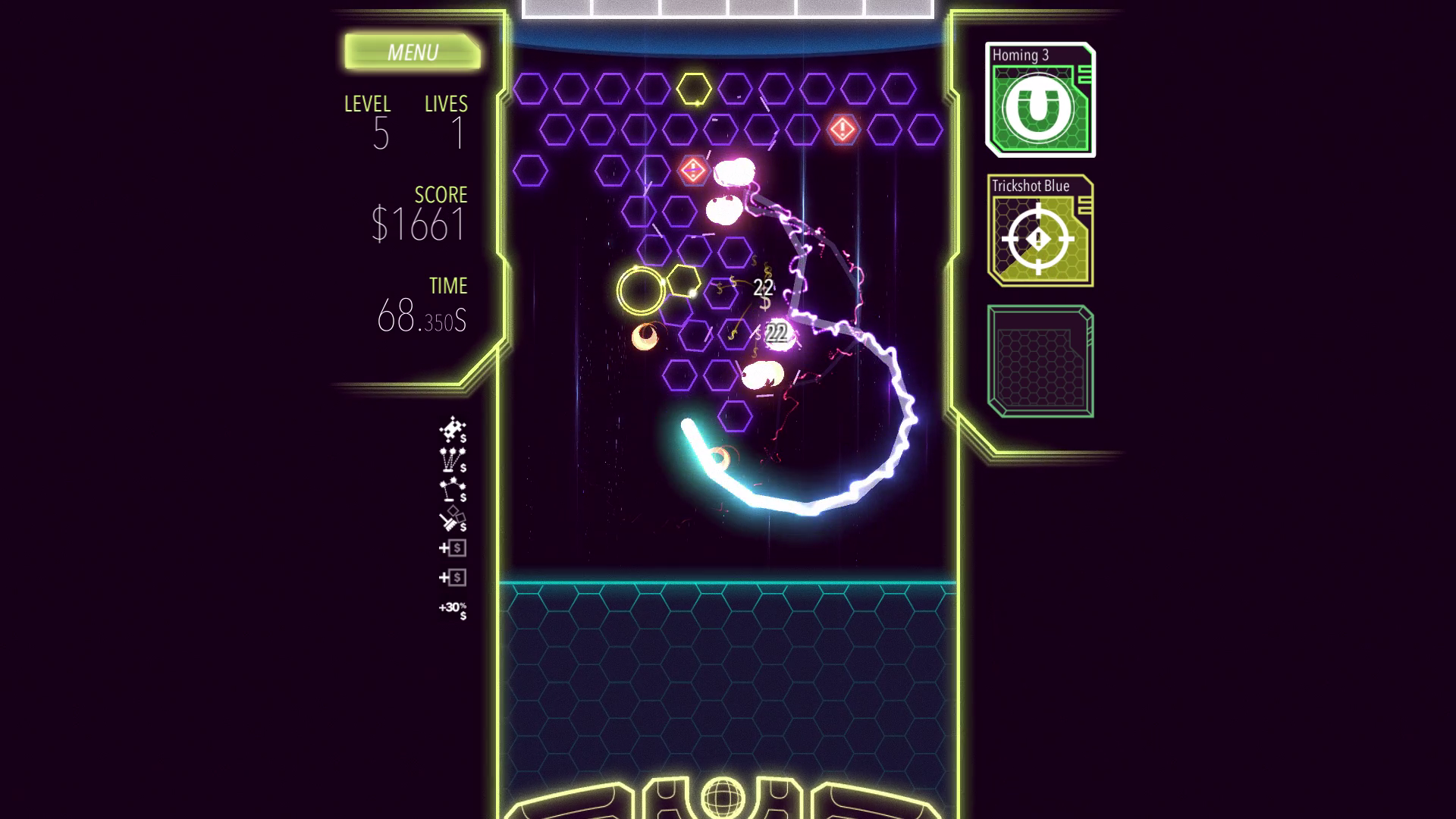 There’s the standard game mode where you have three lives, levels, and bosses to defeat. Through the earned currency, you can also unlock modes. One of the other modes is Countdown, where a constant ticking timer decreases from 30 seconds out of the gate. If you beat the level, the timer is reset. This continues on until the timer reaches zero. It’s a one-life mode, constant pressure, and continued bosses. Next is Zen mode, a slower pace with a more relaxed take. In this mode, there’s no clock and no bosses. It’s just you and the game, breaking blocks without a care in the world.

To say that Drawkanoid is colorful and bright is an understatement. It features great music, in the style of chip tune but with a high tempo and upbeat. This is a game that just oozes style and vibrancy with the neon design. You may hear some of the songs over and over during your time, but they serve as accompaniments to the action. You’ll always be so focused on the game, you don’t notice otherwise.

When you’ve run out of lives, the game shows you a clip of your game. You can then share this to Twitter, or save it locally for sharing later. It’s a great feature I’d like to see expanded, as it doesn’t always seem to capture your best play. Noticeably lacking are leaderboards, I’d really love to see how I compare against the world, and especially friends. I hope this is something coming in the future. There’s not even a local leaderboard for that classic arcade competition, that would be the minimum I’d like to see.

I did encounter a single bug when playing Zen mode, where the ball disappeared, and I couldn’t play a new game, and the timer kept going. The only thing that was left for me to do was quit out of the game. It was far from my best game, but just a random thing to occur. 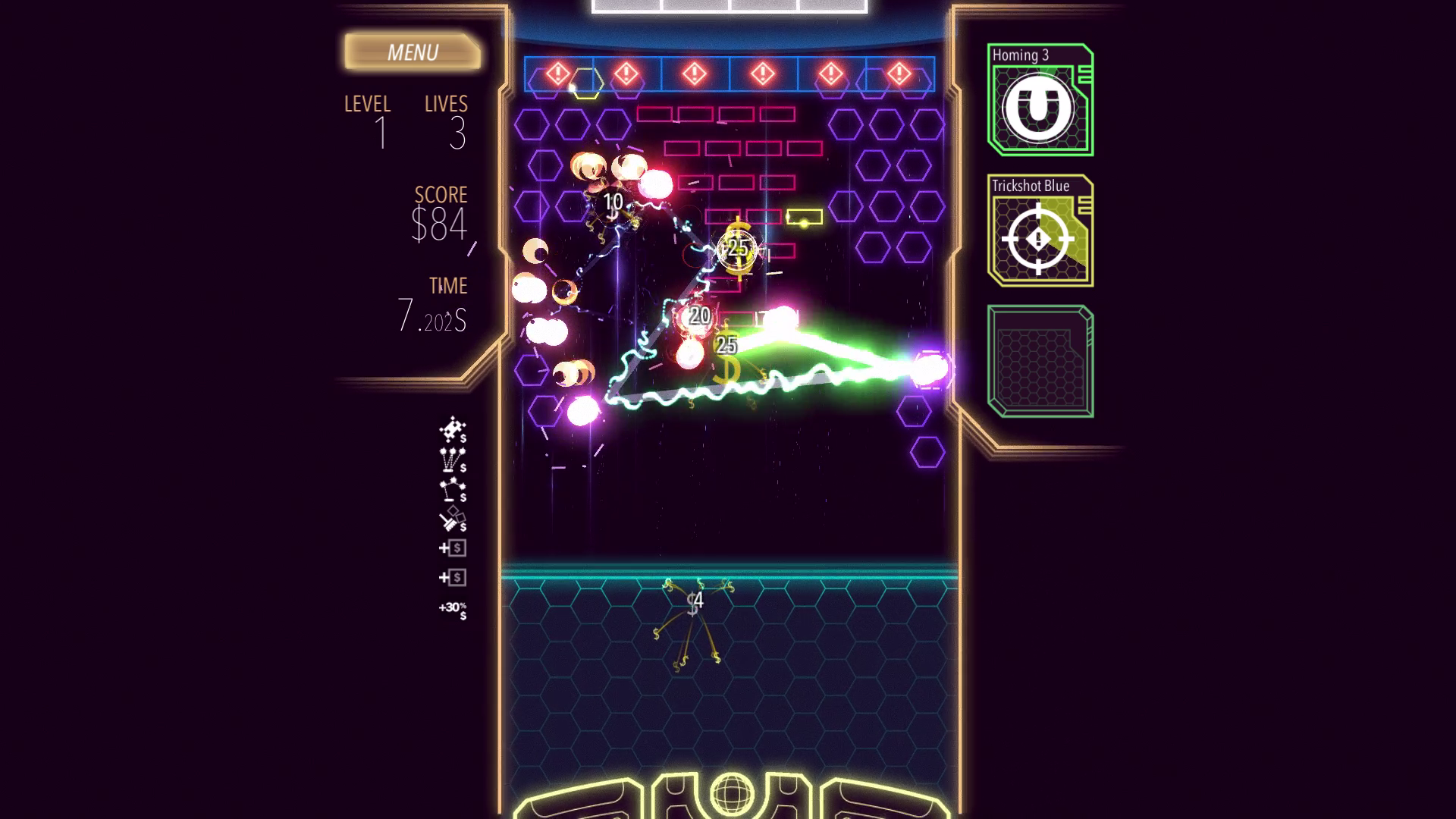 I haven’t been this excited about an Arkanoid-like since Shatter. QCF Design knows how to put a game-changing twist on a well-worn formula. You’d be surprised how quickly time adds up when you finally decide to go do something else. Even if Arkanoid-likes aren’t your thing, Drawkanoid should absolutely be on your wishlist or in your cart. Drawkanoid is full of energy, color, and wonderful ideas that come together in incredible ways.