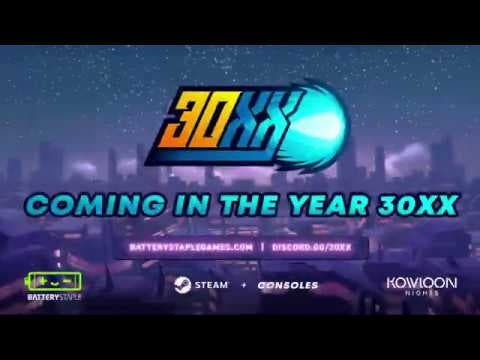 POST-HUMAN EARTH – Feb. 13, 30XX – Batterystaple Games, the studio behind 20XX which was named one of the Top Early Access Graduates of 2017 by Valve and purchased by more than 200,000 fans of co-op roguelike platformer action, is proud to announce a follow-up to its hit first effort, 30XX. Developed with support from Kowloon Nights, 30XX will make its debut at PAX East 2020 before double jumping and dashing to Windows PC and consoles in 2021.

Inspired by classic Mega Man titles and infused with modern design, 30XX builds upon 20XX’s Megaroguelike foundation with a plethora of new features including a new hi-bit art style from art director Glauber Kotaki (Rogue Legacy, Duelyst, and Chasm) and a fresh set of eight new worlds to explore, each with their own identity, platforming mechanics, and fearsome Guardian.

Beyond the aesthetic overhaul, 20XX heroes Nina and Ace return with a myriad of new abilities. No longer merely wielding different primary weapons, in 30XX the powerful pair possess entirely distinct move sets allowing greater freedom of expression for both exploring levels and beating back the machines holding Earth prisoner.

Nina’s new Power Fusion system allows her to meld together abilities earned from vanquishing bosses and tailor them to the situation at hand with 64 separate attacks. Meanwhile, the blade-brandishing Ace boasts a versatile set of Techniques, which can be chained together with standard attacks to unleash fierce combos, adapt to any situation, and reach new heights.

30XX also introduces a fresh level of roguelike challenge and reward with its new metagame currency, Memoria. Collected during runs, Memoria can augment the experience, boosting character abilities, giving keen insight into the challenges to come, or altering how stages generate other helping hands. Once certain criteria are met, turn up the heat with Entropy Conditions, introducing optional layers of additional difficulty in exchange for Memoria and other rewards.

“The response to 20XX has been incredible, but we still see many ways we can continue to improve and expand upon the wonderful game our community helped us build,” said Chris King, founder of Batterystaple. “With 30XX, our mission is to realize the limitless potential the genre offers, and we can’t wait to bring our fans into the fold to help shape the process.”

30XX will be available for hands-on demos in the Indie MEGABOOTH at booth 21027 during PAX East 2020 in Boston, Mass. Feb. 27-March 1 ahead of its full release across Windows PC and other video game platforms in 2021.