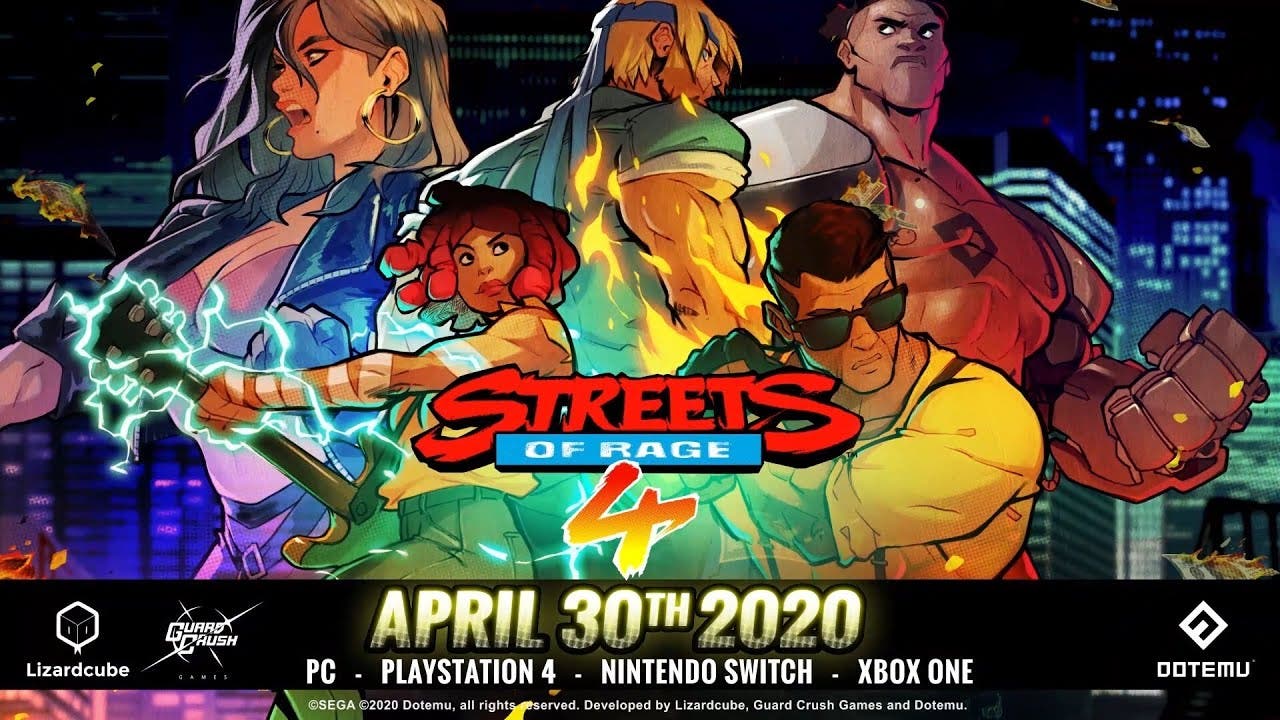 PARIS (April 17, 2020) – Publisher and co-developer Dotemu (publisher of Wonder Boy: The Dragon’s Trap, developer of Windjammers 1 and 2) with co-developers Lizardcube (Wonder Boy: The Dragon’s Trap) and Guard Crush Games (Streets of Fury) proudly announced today that Streets of Rage 4, the long-awaited return of SEGA’s iconic beat-em-up series, will hit PC, PlayStation 4, Nintendo Switch, and Xbox One as well as Xbox Game Pass on April 30 for $24.99.

The news arrived alongside a trailer revealing the first look at Streets of Rage 4’s Battle Mode, a legacy experience returning from Streets of Rage 2 and 3. This feud-settling battleground is bound to help rivals recognize who truly is Wood Oak City’s finest alley-clearing ruffian, as well as settle grudges spurred by accidental friendly strikes during multiplayer sessions. Witness just a few of the ways champions will be able to dominate their allies by viewing the trailer here: https://youtu.be/TzeW6kuh6XA

To keep their news combo going, Dotemu, Lizardcube, and Guard Crush Games have also detailed how they incorporated the recently announced pixel art characters and classic Streets of Rage 1 and 2 soundtracks into Streets of Rage 4 via a PlayStation Blog post. Learn the full story and why making the idea a series-spanning reality was so important to the team by reading the post in full here: https://blog.us.playstation.com/2020/04/17/streets-of-rage-4-launches-april-30-battle-mode-announced/

Streets of Rage 4 is the franchise’s first mainline entry in more than 25 years, reuniting Axel, Blaze, and Adam while introducing fresh fighters and combat depth, an arrestingly fluid hand-drawn art style, and an all-new scenario as well as city boroughs to crack skulls in. With an original soundtrack from Olivier Derivière incorporating worldwide talent, including massive contributions from series composers Yūzō Koshiro and Motohiro Kawashima, Streets of Rage 4’s pairing of classic elements with distinctive modern direction makes this highly anticipated return the fight of a lifetime.

To keep up with all things Streets of Rage 4, be sure to wishlist the game on Steam (https://store.steampowered.com/app/985890/Streets_of_Rage_4/), head to www.streets4rage.com, check out www.facebook.com/StreetsofRage4, pummel @Dotemu, @Lizardcube, and @Guard_Crush’s follow buttons on Twitter, and join us on Discord: https://discord.gg/DvVq4yz.