It's evident that 80's OVERDRIVE takes inspiration from games like Outrun and Rad Racer, and thankfully does a lot new things to separate itself from what came before it. The racing feels good, and is backed by an appropriate synthwave soundtrack. However, later races have too much going on and with some randomness of collisions will force you to restart more often than you'd like. Some issues aside, 80's OVERDRIVE is a solid racer with depth in a gorgeous and vibrant palette.

Sunsets, neon, and synthwave; these are the characteristics oft-recalled from the 1980s. Insane Code draws inspiration from that decade to include the culture, the pixel art, and the games with 80’s OVERDRIVE. The developers took some liberties with the art style as it recalls the 16-bit era, making it a bit anachronistic, but it absolutely works. While later races are frustrating at times, it’s gorgeous to look at it, fun to play, and offers a solid challenge. 80’s OVERDRIVE is very fitting for the Switch, and if you have nostalgia for this style of game and era, you’ll be right at home. 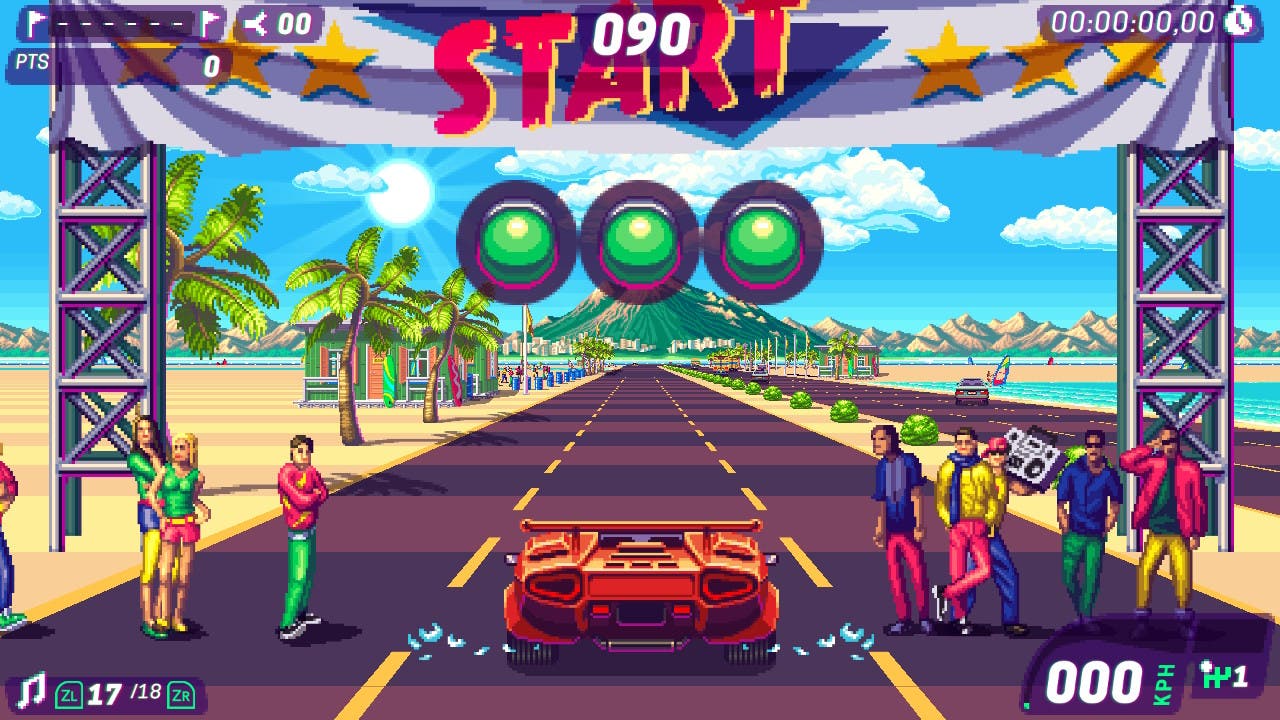 80’s OVERDRIVE resembles racing games from the 8-bit and 16-bit era, but with its own spin on things. Races are quite straight-forward, with some curves and hills to break it up. As the game counts down to GO!, you should be careful not to peg your tachometer, or risk spinning your wheels at the start line and losing precious seconds. If you time it right, you can get yourself to the head of the pack within the first ten seconds. Then it’s about keeping clean lines and avoid traffic until you reach the finish line. Though, this is sometimes easier said than done, as later levels prove to be incredibly random and difficult for reasons you can’t predict. The racing itself is easy to pick-up and play.

The career mode is first and foremost in the menu, and likely to be the one you’ll be most attracted to. You’ll be asked to buy a car, and set off to start completing races. The game’s map does a good job at conveying what you’ve seen and done. Stars represent races, and there’s around 40 of them. So it makes sure to distinguish between new (never raced on before), won (achieved 1st place), raced (finished not in 1st place), and locked (do more races to unlock them). Aside from the career mode, there’s time attack mode. It’s a traditional Outrun-style mode with a constantly ticking timer that only crossing checkpoints will replenish the clock. A run completes when you are out of time or reach the end of the branching tree. At the end, the game will keep track of high scores as you work your way through this mode. 80’s OVERDRIVE tracks your path, for which there are many. So it’ll be easy to spend a lot of time here, as you’ll want to fill in that tree to completion.

The track editor is a welcome feature, letting you create the track of your dreams for playing, and sharing. It lets you decide between a theme (the game’s eight locations) and length of the race. You can define the curves, hills, and lanes to manuever in. You can decide whether police is on or off, and whether traffic isn’t there or has some. Naming your level though, is unfortunately very restrictive, as it only allows 8-characters. You can create up to 20 tracks before you have to make some hard decisions. I made a straight track with no police or traffic on my favorite location, just for chilling and listening to music – and it’s kinda perfect. 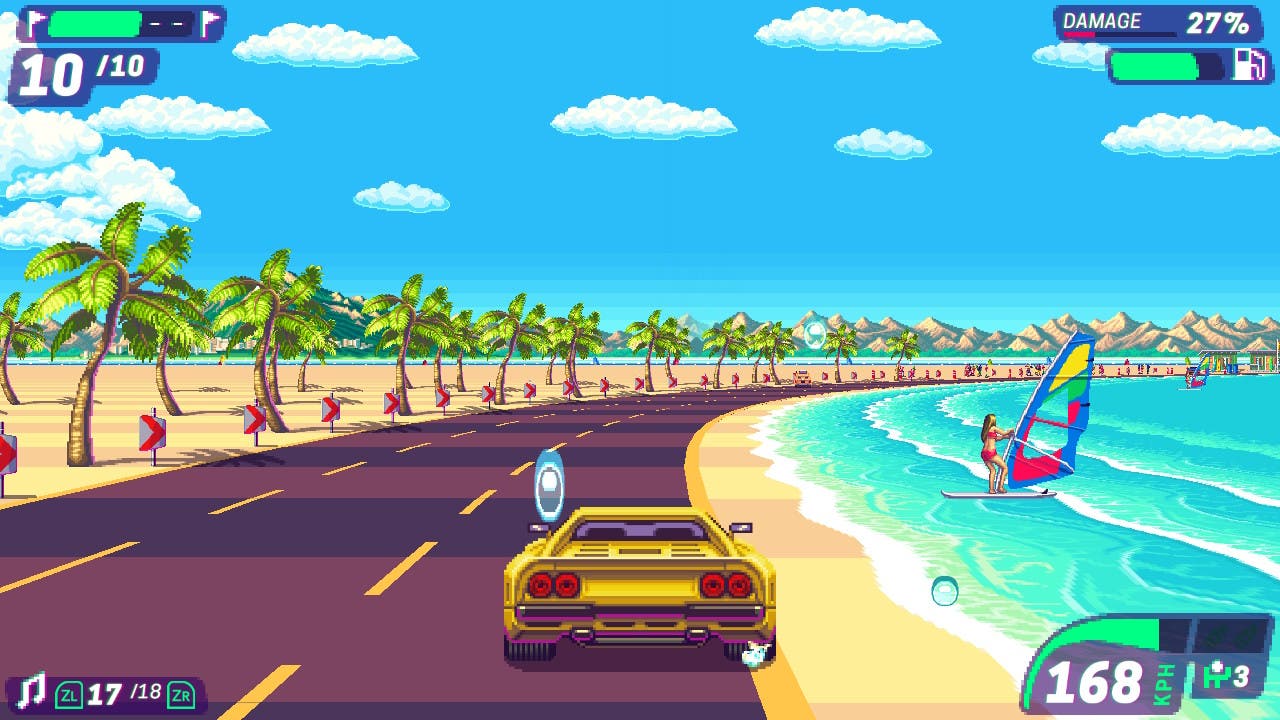 There are entry fees to races as you work your way through the career, and they get more expensive with the higher tier races. There’s even a system where you’ll have to spend money on gas and repairing damages done to your car. The game is nice enough to warn you if you’re too low on fuel, or too damaged to continue, giving you an opportunity to fix either. This feels like there’s consequences to smashing up other racers or driving with a general disregard for others, making your money mean something.

There are six cars that are similar to their real-life counterparts. You’ll find cars similar to the Lamborghini Countach, DMC DeLorean, Ferrari Testarossa, and Porsche Carrera. Any car can be upgraded. So if you have a favorite, instead of buying a new one, you can upgrade things like engine (speed), steering (reactive turning), and bumpers (armor). You can also add nitrous boosts and a radar to detect cops. 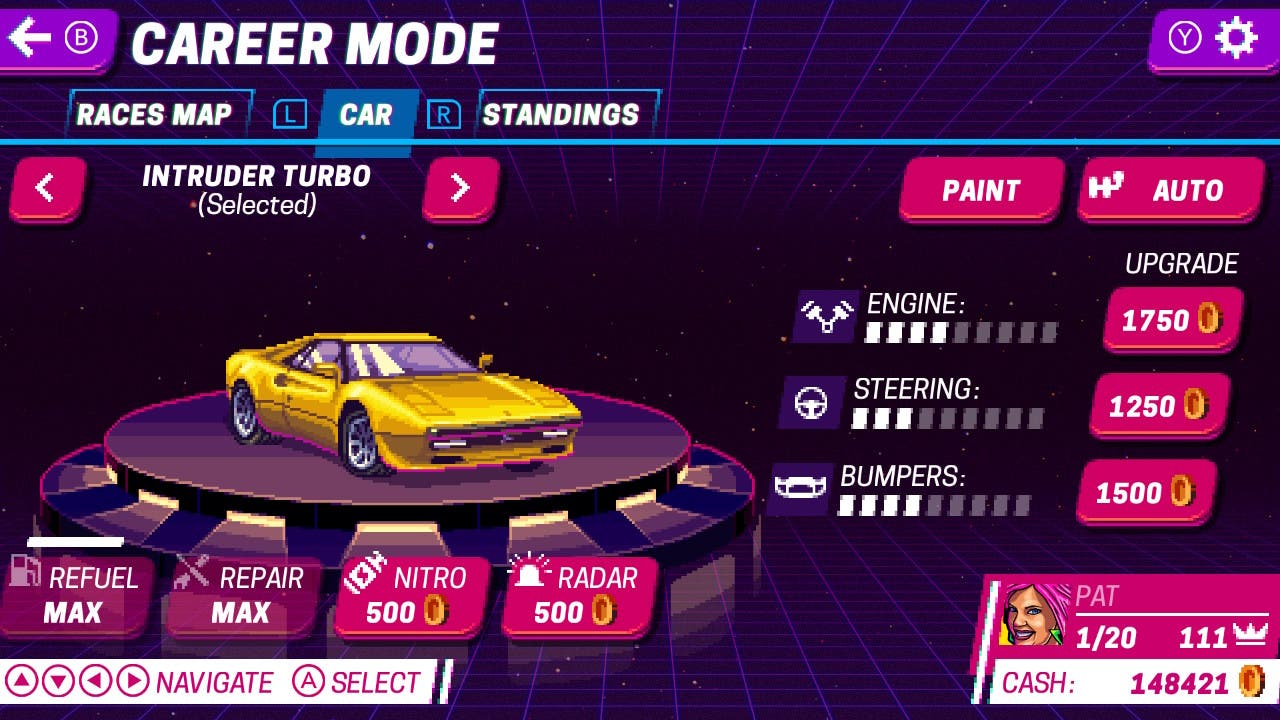 One question I didn’t know I’d have to even ask was: what if you run out of money? Well, as it happened to me: I bought a new car, and all the upgrades I could apply. I was primed to win my next race, but I didn’t have enough money to pay the entry fee. It was then I saw some new icons on the map I hadn’t seen before – I was being asked by other racers to wash their car, which is a simple mini-game of “wiping” the rag across their car until clean. I then got enough coin for the easiest race, and just re-raced it to actually to earn money to enter myself into the race I really wanted.

At random points during the career, you’ll be offered a mission for extra coin. They’re mostly no-brainers, tasking you to place better than someone, collect a certain number of items, or what have you. Sometimes you’ll be asked to throw a race, though. This of course is up to you, but that means you’ll have to race it again if you want to earn more stars and get that green star for getting 1st place. The up-front reward wasn’t worth it for me, and I often declined.

There’s a police presence within your races on selected levels. If they catch you speeding, they’ll start pursuing you. They’ll try to swipe at or stop you outright, and after three attempts they’ll give up. The radar add-on you purchase seems kind of useless. Since you’re in a race, slowing down to avoid the police makes little sense. It’s best to initiate the chase, dodge, and go on.

Should you make contact, you could be sent off-track where you’ll crash and stop you dead in your tracks. You’ll then be reset, but this is often too late to regain meaningful ground, even with nitirous boosts, so restarting the race makes more sense. Frustration lies in the fact that you have to be nearly perfect in races and do no more than light contact to avoid restarting races. I wish it weren’t so dependant on this, but you’ll always have another race to do if it becomes too much. It’s evident that 80’s OVERDRIVE takes inspiration from games like Outrun and Rad Racer, and thankfully does a lot new things to separate itself from what came before it. The racing feels good, and is backed by an appropriate synthwave soundtrack. However, later races have too much going on and with some randomness of collisions will force you to restart more often than you’d like. Some issues aside, 80’s OVERDRIVE is a solid racer with depth in a gorgeous and vibrant palette.