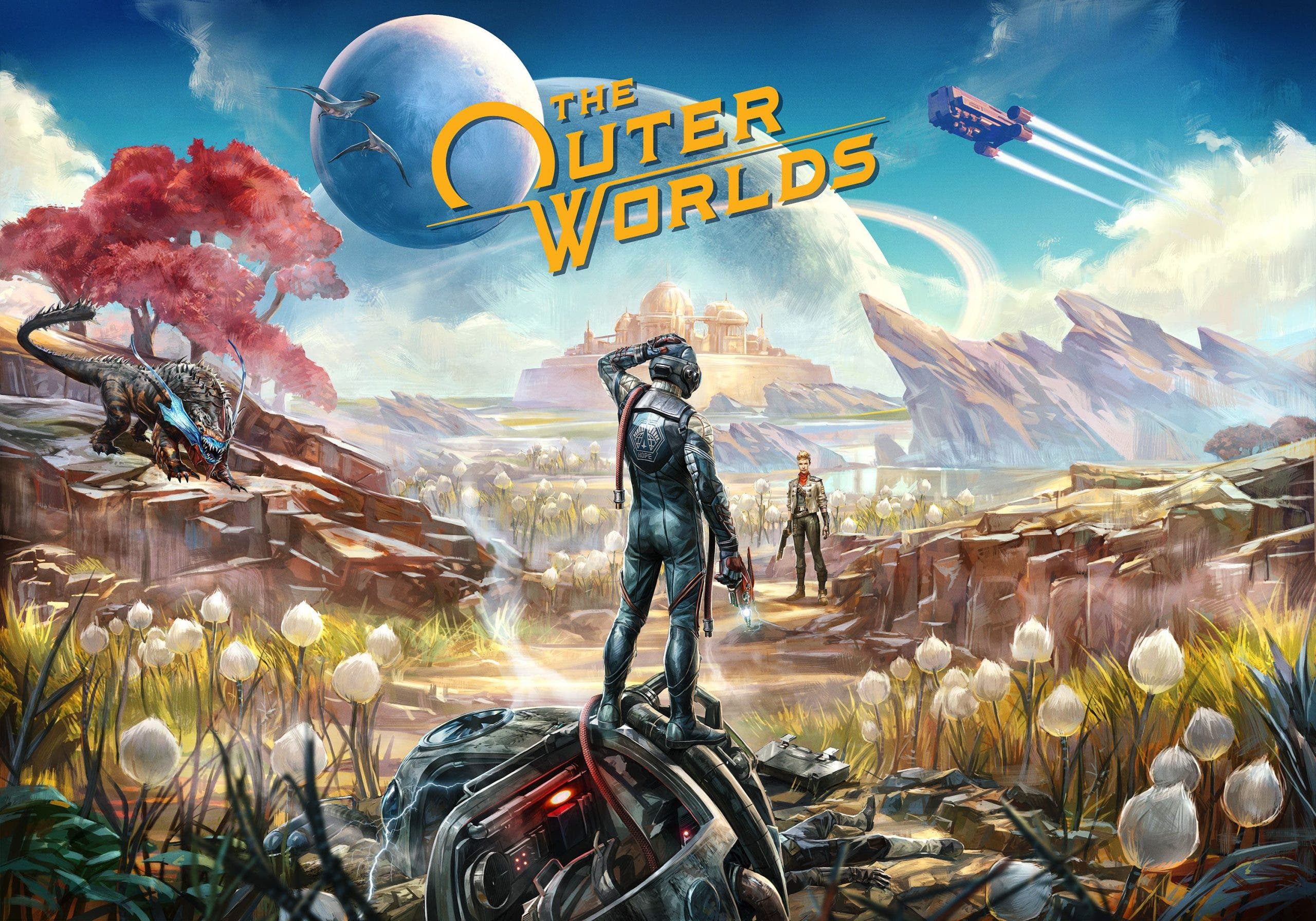 You’re jolted awake, shaken from a long, comfortable slumber by a frantic man with shock white hair and a sense of urgency that does little to soothe your frayed nerves. Klaxons wail and your senses are generally overwhelmed by the rush of stimulus they’ve not been subjected to in nearly seventy years. Wait, seventy years? It was supposed to be ten… and now you’re being sealed in a pod and dropped onto the surface of an alien planet, and you have next to no idea what’s going on . The world that awaits you is mysterious but lush and vibrant, full of bizarre creatures and a sizable number of people with a curious affinity for a questionably reputable mega-corporation. You’re intrigued, and you want to dive in deeper, except you can’t shake the sense that you’re wearing goggles covered in mud and grime you can’t seem to clean off.

The first fifteen minutes of The Outer Worlds serve as a great introduction into a world that should be full of life, personality, and unique character, but on the Switch the experience ultimately comes off as a discount replica of the genuine article. 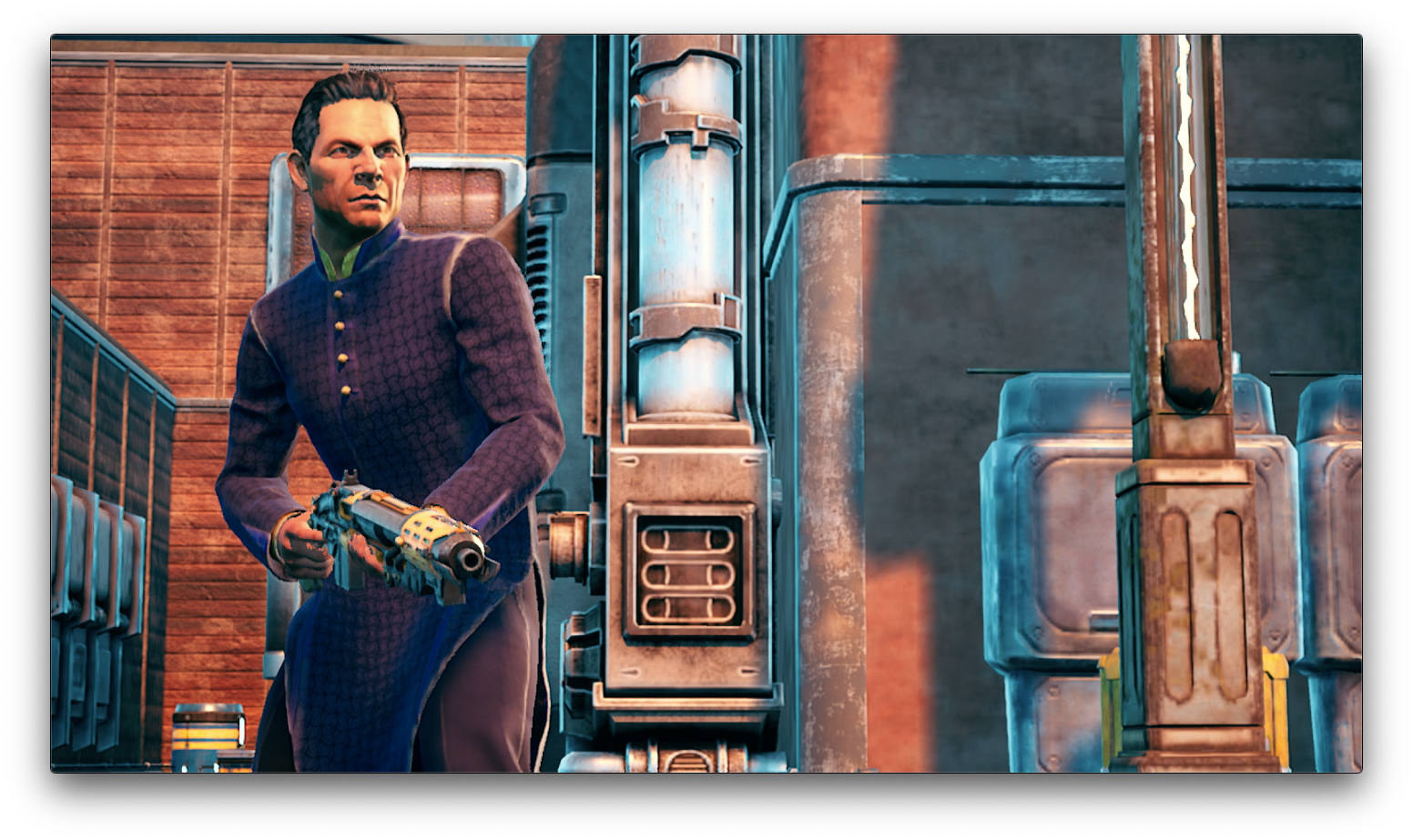 Obsidian is known for games featuring rich worlds, well-written characters, and engaging stories that all act in service of well-honed game play. Their other works are much beloved by RPG fans, and their pedigree speaks for itself. This is a studio that knows how to make quality software. The Outer Worlds is truly a game that lives up to those standards in most ways, and is a delightful experience unto itself. The game’s art direction and visual style represent a fusion of 1920s Art Deco and 1950s space-age sensibilities, blending multiple eras of sci-fi together to create a fusion that feels simultaneously familiar and completely unique. It’s lovely to behold, and its effective use of visual style over adherence to photorealism make for some truly lovely spectacles. Make no mistake, this is a very good game, but so much of the sense of immersion comes from the presentation that much of the joy is lost in translation to the Switch.

In fairness, it is certainly impressive that an open-world RPG of this scale and scope has been successfully brought to the Switch. It isn’t the first game of its kind to make the leap (see: Skyrim and The Witcher 3), but it is among a small group of peers. Admittedly, I have genuinely been fairly excited for this game to come out on the Switch, as I thought it would be more accessible to me and my schedule if I could play it on the go rather than at my computer or TV. Sadly though, the results of this ambitious port aren’t quite up to par with other efforts in its class, and while The Outer Worlds on Switch is playable, it isn’t necessarily a joyful experience. 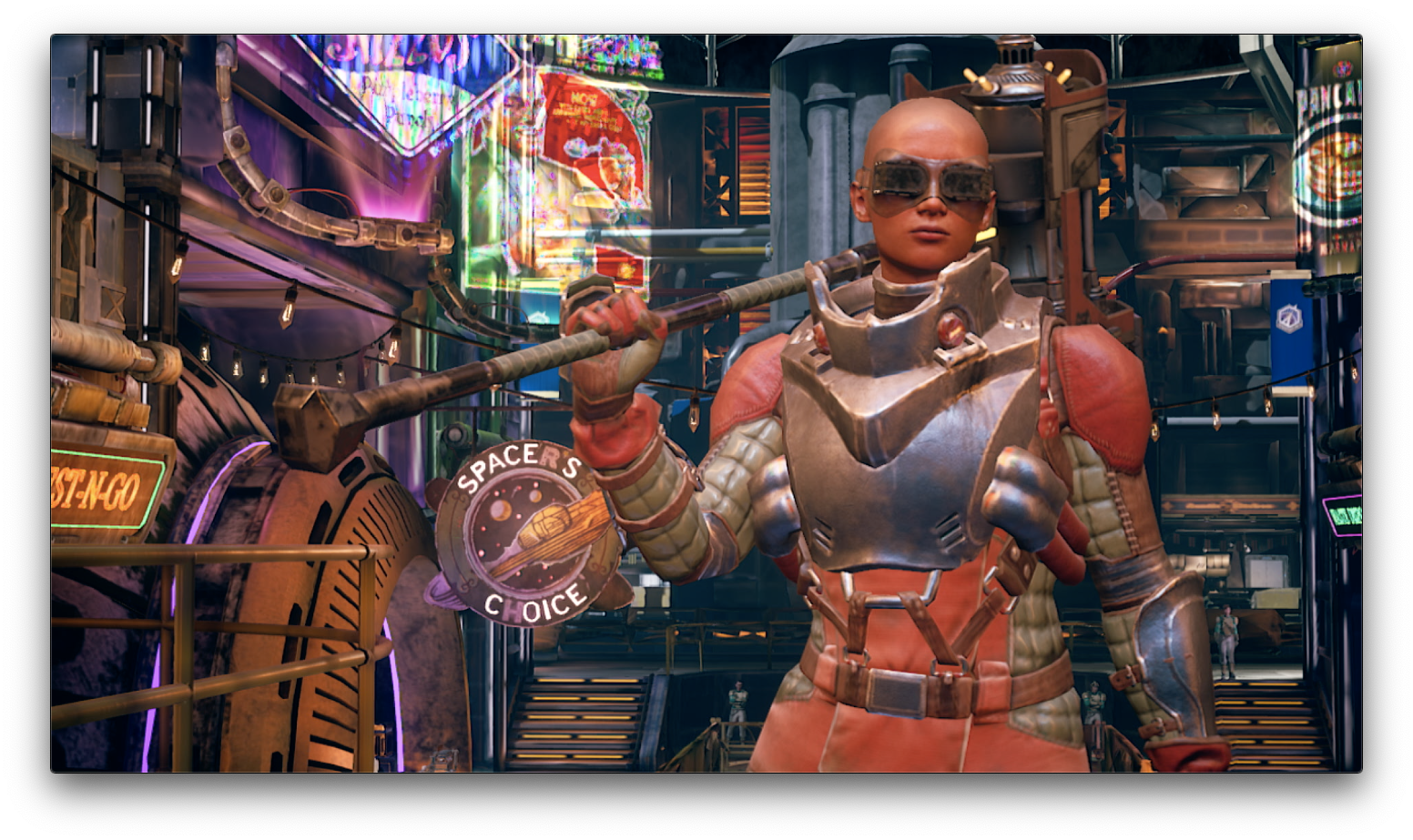 Let’s start with the positives. The game’s writing is very good, with witty, convincing character dialog and voice acting that imbues the characters with authenticity. Their motivations and feelings are believable, even in the case of some of the campier or more minor players you’ll encounter. The game channels a running commentary on peak capitalism, corporate greed, and the ways people work within dystopian frameworks to eke out their own existence. It’s very tongue in cheek, but it works, and the corporate tagline of “It’s not the best Choice, it’s Spacer’s Choice!” somehow remains a humorous coda as it punctuates story beats and general world exploration throughout your journey.

If you’ve played the recent Fallout or Elder Scrolls games, then you’ll be well prepared for The Outer Worlds‘ overall feel and game play style. It is very much in the same vein as those games (no surprise given Obsidian’s history), though it offers a more streamlined approach to character building and equipment so that you still get a sense of customization and ownership of your character build without having to spend too much time thinking about how to best maximize efficiency. It features many of the same crafting systems found in Fallout 4 and Skyrim, and even the lockpicking and hacking systems feel like distilled versions of their older cousins. This game does not try to hide its lineage, but in some ways it improves upon that history by removing cruft and focusing on the core idea of a given system. Crafting becomes less about specific materials and more about generic “weapon parts” or “armor parts”; lock picking is simply a matter of a skill check and having the required items to perform the pick. You still feel like you’re engaging with the same kinds of systems, but the amount of effort required and the amount of thinking and inventory management you have to put in are reduced in the interest of keeping your momentum up.

I love the characters in this game. NPCs are engaging to converse with, especially those with well-crafted back stories and a real commitment to their convictions and affectations. It can often feel like taking part in an interactive play in some ways, which I mean in the best way possible. Companion characters provide an even bigger anchor to the world for you, and you really do feel that you’re getting to know them personally and forming some kind of strange virtual friendship over time. There’s a playfulness to the acting and writing that leaves you feeling as though the game is winking at you, and you’re being welcomed into the grand show.

There is so much going on to love about The Outer Worlds, which is a big part of what makes the Switch version fall so short. For everything that the game has to offer on its own, there is just too much interference going on from a technical standpoint for that sense of immersion and wonder to ever really land, or to remain intact for any reasonable length of time. 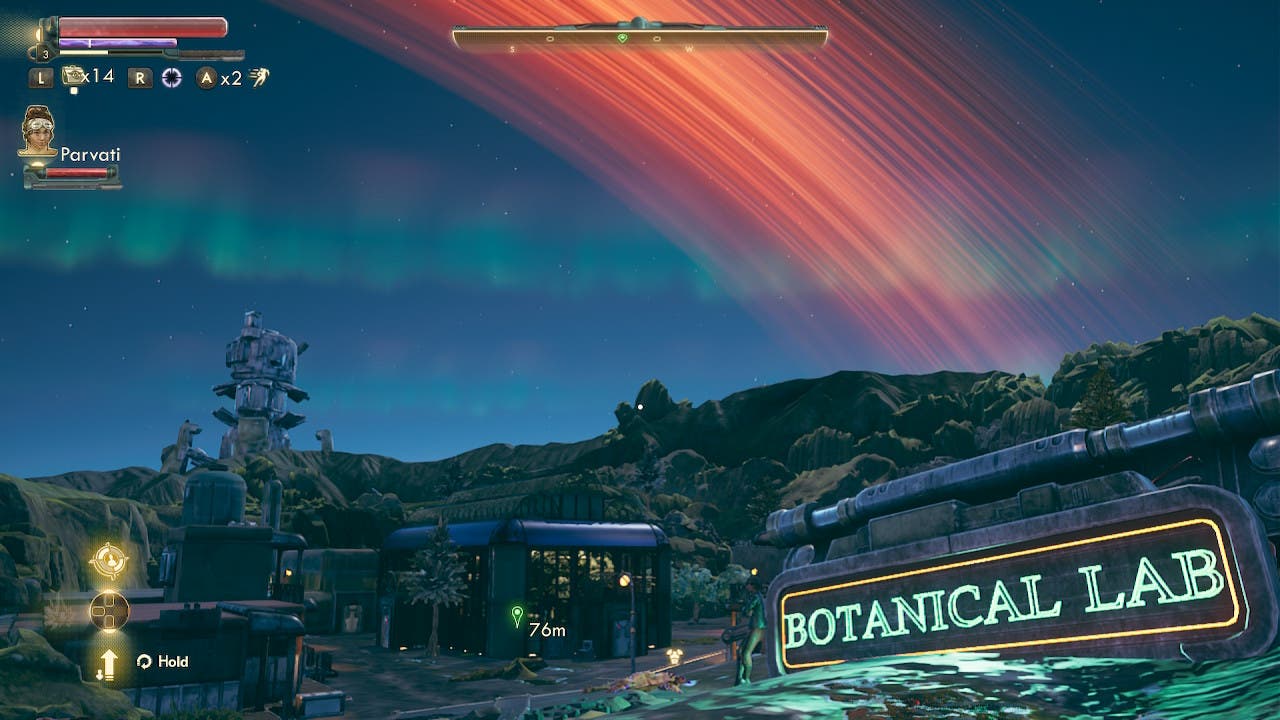 While the game’s UI is crisply and clearly displayed at native resolution, everything else has been down-scaled and cut back as much as possible to fit this ambitious port into a footprint that will run on Switch. The display resolution is seemingly low (especially in handheld mode), texture resolution is particularly low, particle effects and lighting are mediocre at best, and while the frame rate is usually hovering around a stable 30 during exploration, it drops significantly in times of combat or when nearing large outdoor settlements. The game is also riddled with texture pop-in issues, with some textures often loading in extremely late even for objects you’re standing right next to. I noted one instance of standing next to a sign and waiting for a full six seconds for it to switch from its long-distance texture to the near-distance version so I could actually read it. This is fairly typical of many Unreal Engine ports on Switch, but this one seems to suffer quite a lot.

You’ll often find yourself navigating a murky, bland environment reminiscent of PlayStation 2 era visuals, with jarring texture pops due to slow streaming, and frame rates that dip any time you really need them to stay stable. It’s kind of a mess, and it’s really unfortunate because this should be a very exciting release for Switch owners. If you hold still long enough, or move slowly enough through the world, you can get some nice moments, but generally speaking the game’s technical issues will pull you right out of the experience the moment you start to settle in.

For a game that’s so dependent on its art style to drive home much of its personality, character interactions and the story are left to carry the weight of completing the sense of immersion, and most of the time that load is too great for them to bear on their own. The Outer Worlds on Switch just doesn’t land well without all of the aspects working together in concert. I’m not saying the game is unplayable, it just feels like the experience is severely hamstrung and it’s hard to get a proper sense of enjoyment out of it. There’s still fun to be had, but it comes in fits and starts, and it really doesn’t stand up to any of the other platforms the game is available on. If the Switch is your only gaming system, you’re really hankering for a space adventure, and you don’t mind or notice technical problems, then there may be something here for you. Otherwise, you’d do well to play elsewhere. To paraphrase the game itself, the Switch version of this game isn’t the best choice, it’s… well, you know the rest.