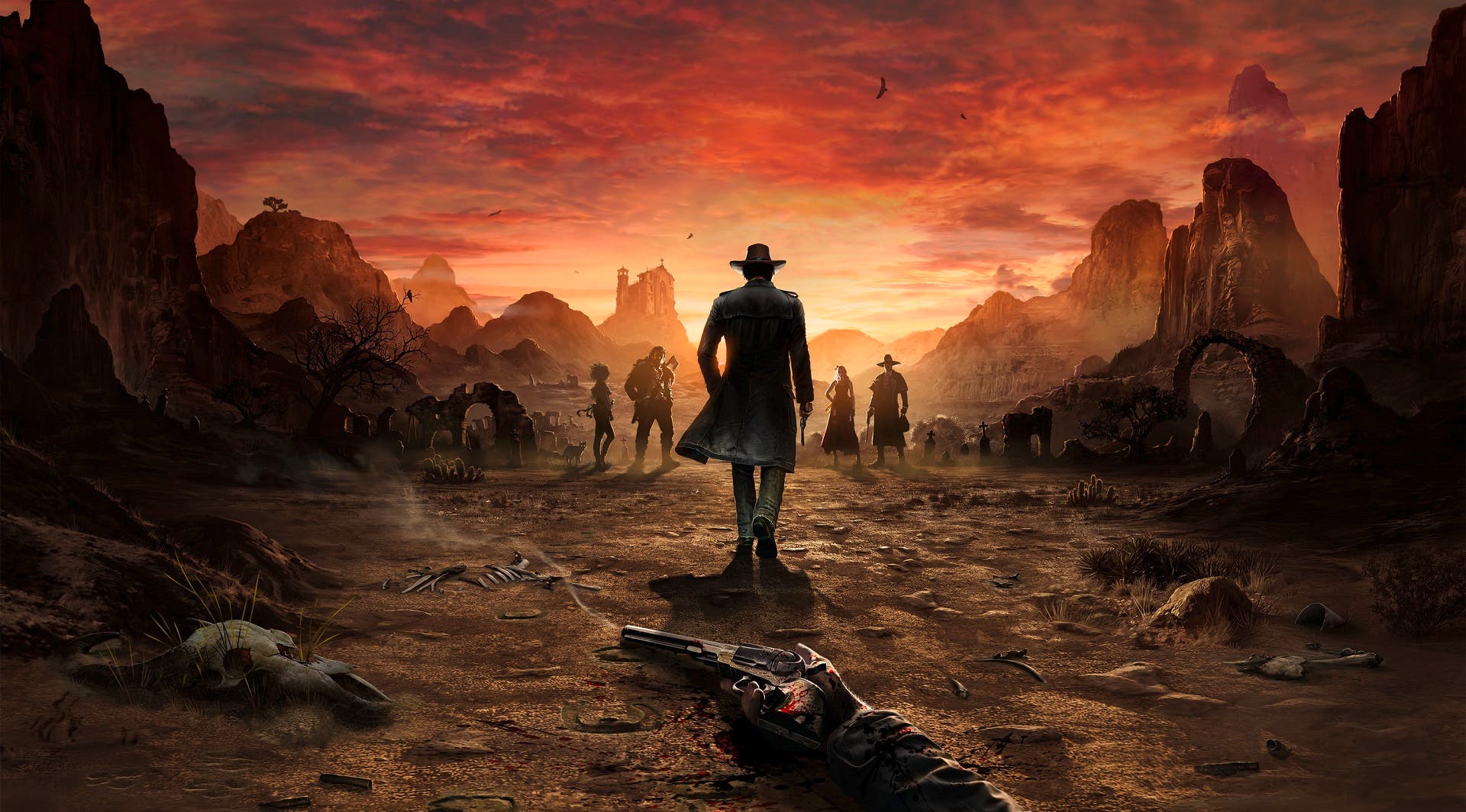 “The best laid plans of mice and men often go awry.” This is Desperados III in a nutshell, where careful planning doesn’t always mean a flawless execution. This is a game of trial-and-error, where the use of quicksave and quickload become invaluable resources to rely on for getting through any given level. Desperados III sees the real-time tactics game with pause return in glorious fashion thanks to Shadow Tactics developer, Mimimi Games. Desperados III represents the best of the genre, and is the hallmark of excellence. 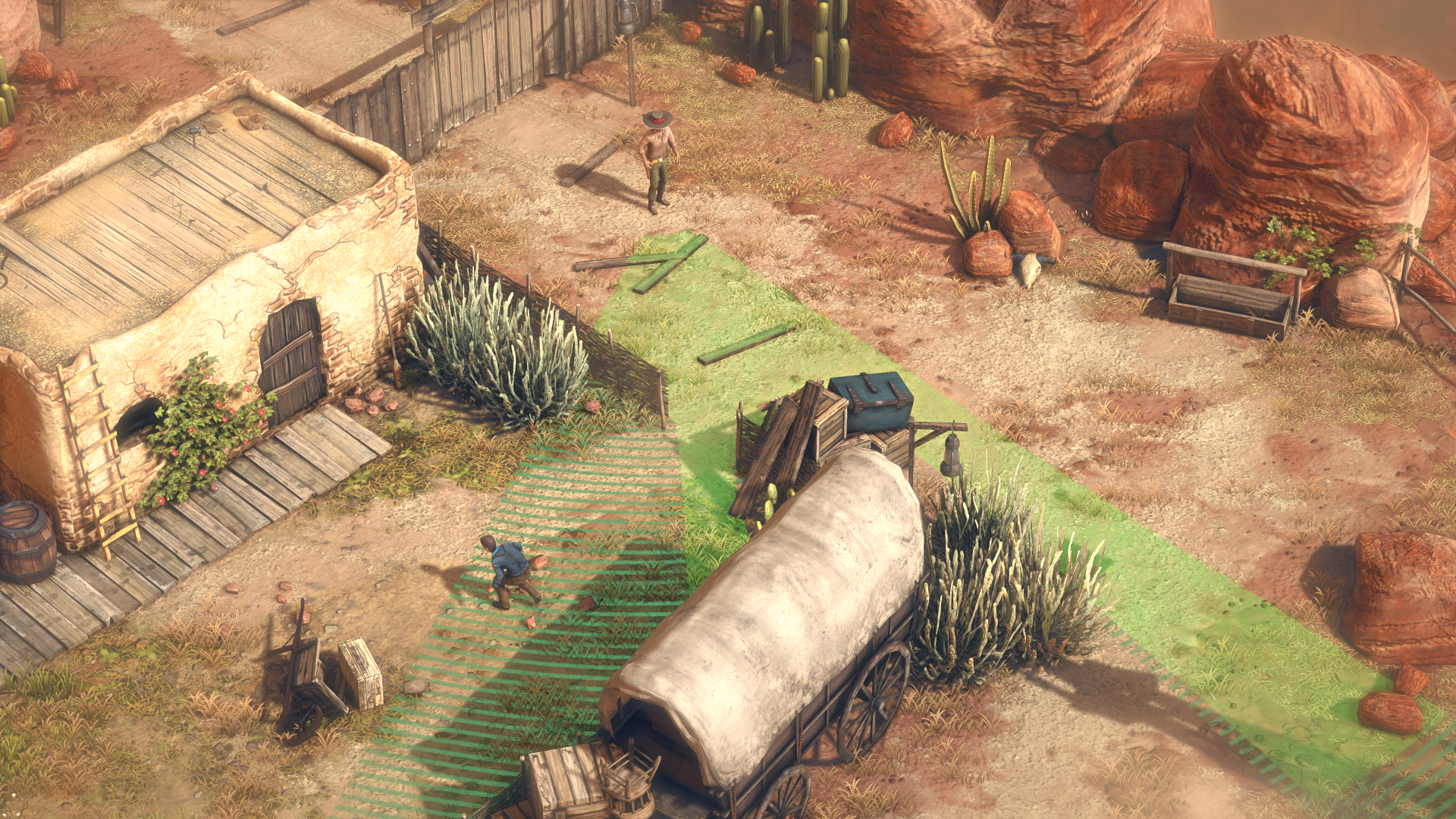 You play as John Cooper, future legend. He follows in the footsteps of his father James Cooper from an early age until his untimely demise. And after some advancement of time, you’ll see the origins of Cooper (as he goes on to omit his first name) and his would-be gang. It’s a simple quest, but what Cooper does after assembling his gang is all done in the name of redemption.

There hasn’t been a new Desperados game since 2007, so it’s understandable if you’re not familiar with this series. With that in mind, this game serves as a prequel to the first and second games rather than a sequel. Meaning, you can get this and jump right in without feeling you’ve missed out on anything. Desperados III features the traditional real-time tactics of Desperados: Wanted Dead or Alive, but utilizes the 3D environments of Desperados 2: Cooper’s Revenge and Helldorado. If you’ve played Mimimi’s previous game, Shadow Tactics: Blades of the Shogun, you’ll find similarities in its presentation and gameplay. Mimimi Games retains the hand-drawn portraits and UI elements that continues to work so well. If you’re new, you’ll fall in love not long after starting the game. 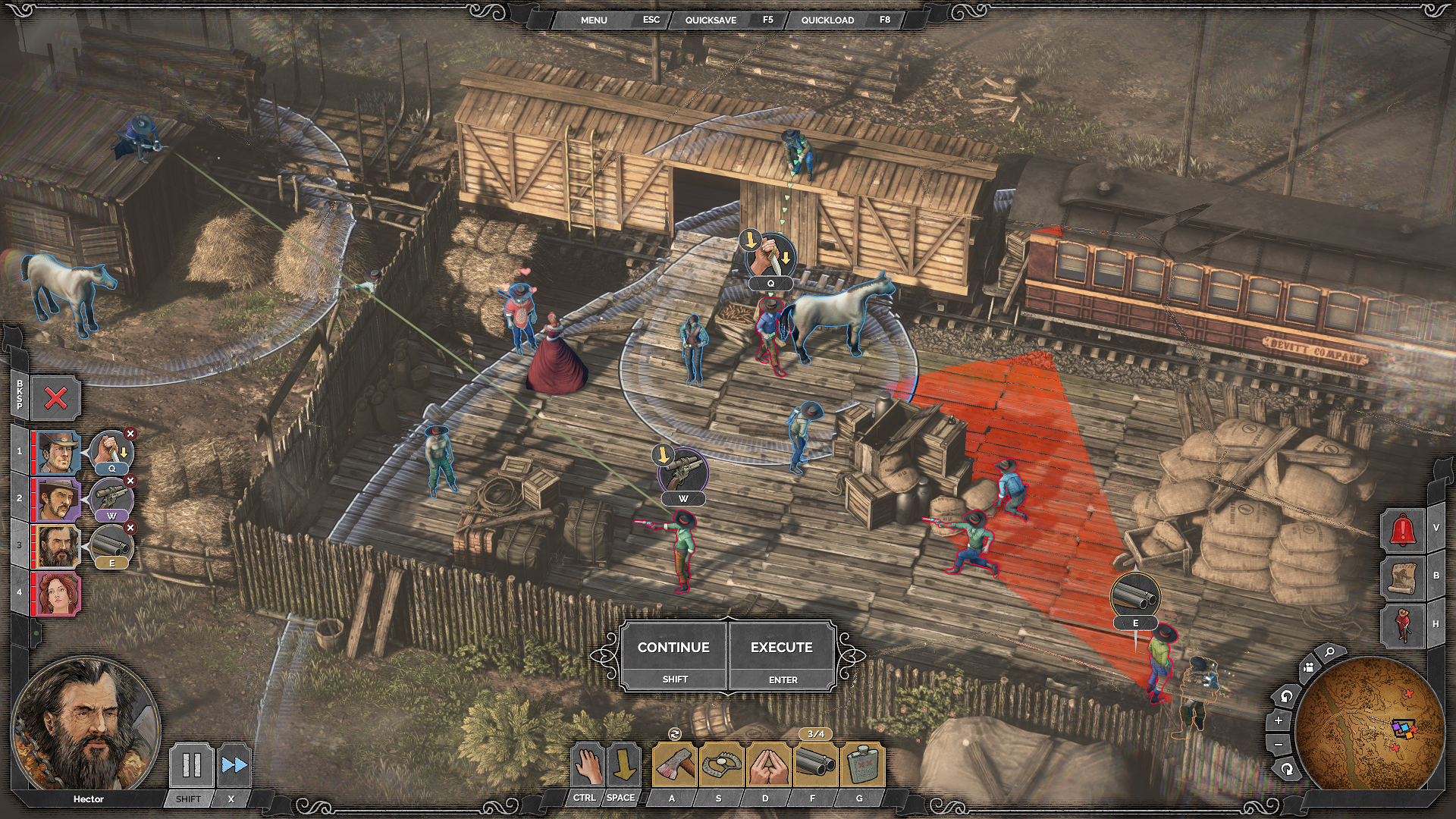 The game often mixes ‘n’ matches you with different characters that fit with the mission, and sometimes gives you a choice. In the gang, you’ve got Cooper who kills with a knife either up-close or at range by throwing it silently. He can even dual-wield revolvers for going quick and loud. Doc McCoy is the doctor of death, with syringes, a long-range pistol, and a doctor’s bag that distracts. Hector is the bear of the group, able to hit the hardest of enemies with his axe, lure with his whistle, or trap enemies. Kate has a hidden gun, blind foes, and can charm the pants off a snake. Lastly, there’s Isabelle who possesses supernatural voodoo abilities like being able to mind control and connect with living beings, mirroring their actions. Being able to learn each character, and utilize not only their abilities but also how they can compliment one another is critical to success. There of course will be times that the characters you’re given require alternative thinking, whereas if a certain character was present, would offset the challenge you face. The interactivity between the characters you control, the environment they’re in, and the situation that gets presented that brings out the creativity in you.

While this is the wild west, this is less about rootin’, tootin’, and shootin’ and more cowboy stealth & tactics. You can certainly go loud, but it has its costs like alarms being raised and more enemies spilled all over the map. You have the option of being lethal or non-lethal in your attacks. Whichever you choose, you should almost always hide the bodies to prevent suspicion. Knocked out enemies can come to, so you’ll have to apply added pressure to keep them out of play. There are some logical leaps where guards go missing, and no one bats an eye — unless you’re seen doing it. Every enemy in the game has a view cone that you can track, and you can even mark a target to get sight lines paints on them when they are in view of another. There’s some really great systems at play, and plenty of information given to the player to know exactly what can be seen, and what can’t. Desperados III relies heavily on the use of quicksave and quickload. If after a minute you haven’t quicksaved, the game will let you know with a banner across the top of the screen. There’s nagging reminders for a reason, things can go sideways quickly, and you need an undo button. And it’s best if it hasn’t been too long since you last saved. Mimimi left the saving of the game to be in the control of the player, and it feels good to have this power. You can certainly disable the notifications and play it a bit more loose, but I like the reminders and the reliance of these systems.

Showdown Mode is the highlight here. This allows you to not only pause time, but you can also queue up a single action for each character to carry out once activated. You can either wait for enemies to get into position to synchronize your attack, or activate it immediately, the choice is yours. It’s great seeing a plan come together, or go horribly awry. It may be a simple mechanic, it’s one that proves its usefulness more times than I can count. Traversing from Colorado to Louisiana, Desperados III covers the wild west with immensely detailed locations, and large combat zones to sneak and fight your way through to complete objectives. Across three chapters and sixteen missions, Desperados III will easily take you fifteen hours to complete your first time, if not more. Each level must be learned, and you’ll spend an hour or so per mission just to see it through. There are a few civil zones sprinkled throughout the game’s levels where you can walk freely (provided you don’t do anything stupid). They serve as a breather that otherwise don’t get in other games like this.

At the end of a mission, you’ll be given badges based on objectives you’ve completed. These are effectively hidden from you the first time you play the level. And when you repeat any mission, all objectives will be listed so you can target them. However, it’s clear that Mimimi Games encourages you to just play how you want the first time through, to get the rhythm of the mission. It’s entirely possible you’ll complete one or two objectives, but they’ll more likely be accidental or obvious ones. The more esoteric and specific ones require much more effort. Replaying prior levels is rewarding and satisfying, and is a big part of the game. 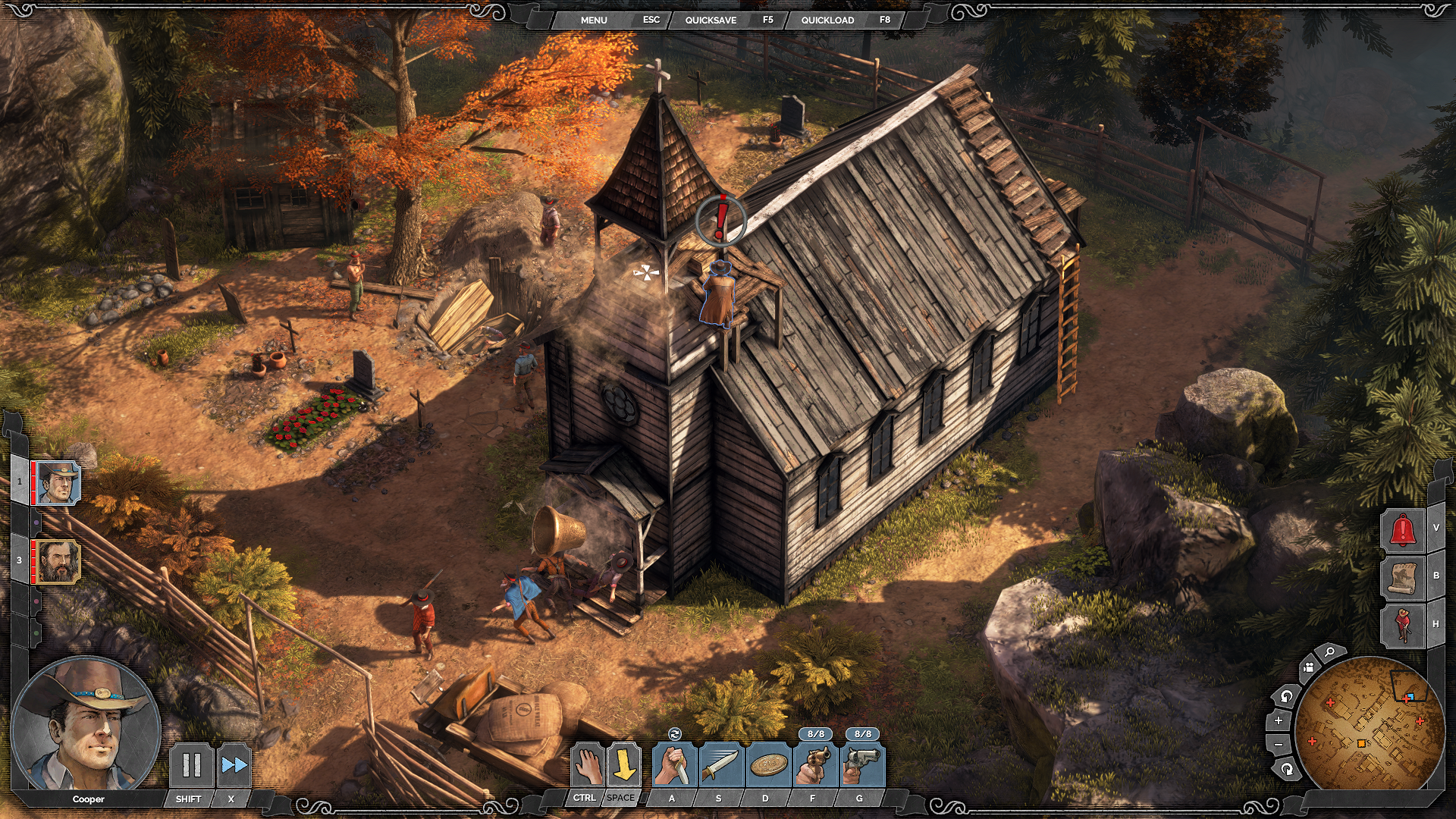 It’s great having fun with enemies. You can spook them, cause accidental deaths like dropping boulders or wooden signs on them, or even seducing them into the path of a train. Experimentation is always rewarded, even if it means loading an earlier save. You’ll always end up learning something by trying something new or seeing your idea through.

The game can be played entirely by mouse, or mixed with keyboard presses. Since this is releasing onto consoles, it does support a controller on PC as well.

Whether you’ve played Mimimi Games’ prior game Shadow Tactics: Blades of the Shogun, the earlier Desperado games, or you’re coming in fresh, you’ll find Desperados III is just an incredible experience. Every character’s ability is unique, and combining it with another’s in showdown mode for a synchronized attack is always satisfying to pull off. It’s rare you see a game utilize quicksaves as a core feature, though it works to great effect here. Mimimi Games’ touches on the real-time tactics genre for this once-dormant series are elegant and brilliant, and not to be missed. Desperados III is simply one of the best games of the year.