Developer Hyperstrange draws inspiration from 80s power fantasy novels, DOOM (2016), and Dark Souls to deliver ELDERBORN. It’s loud, gory, and in-your-face with the arcade-like hack ‘n’ slash combat. The Souls-like consequences to its hack ‘n’ slash combat is a solid experience without having to watch or otherwise manage stamina bars or status effects. And while the overall experience of ELDERBORN leaves a lot to be desired, this is a first-person melee action game all its own. 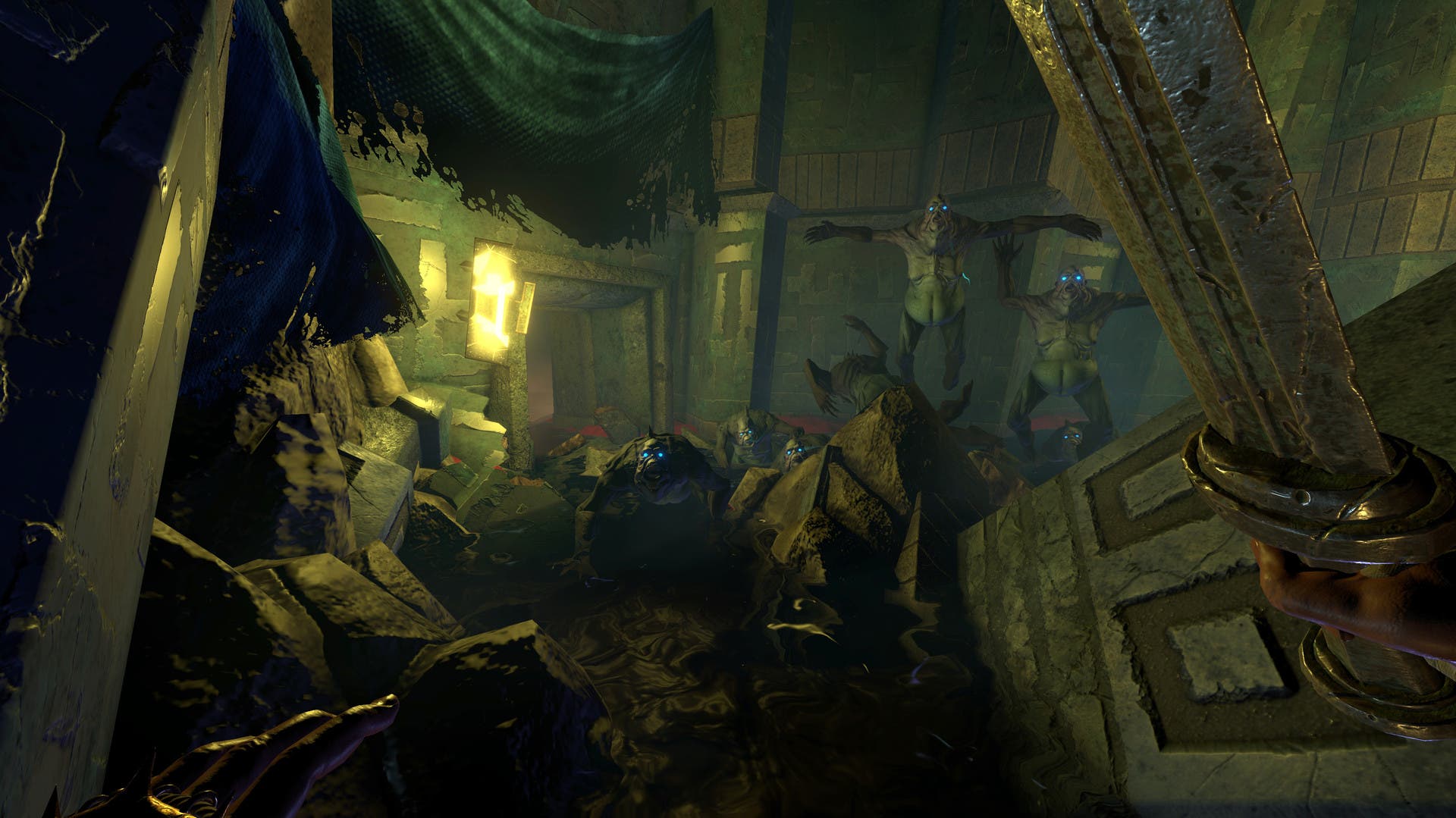 ELDERBORN is light on story, and heavy on gameplay. And to be honest, I don’t remember what transpired over any of it. I do remember the hand-drawn, animated, and voiced cutscenes that carries you from one chapter to the next to be only the length of a commercial, but well made. Clocking in at around eight hours your first time through, the New Game+ mode that gets unlocked at the end, makes a lot of sense. You can play it again without it feeling so daunting, and get any remaining upgrades or collectibles.

The core to ELDERBORN‘s gameplay is the Souls-like mechanics, with a fundamental change to the point-of-view by taking place entirely in first person. To restore health, you must inject vials. And the serum is replenished from killing enemies by any means necessary. One of the game’s best features, is the Dark Messiah of Might & Magic kicks you can do. This will knock-back almost every enemy type, and if you’re near a ledge, you can “300” kick them off to their death — and it’s always hilarious and satisfying. Due to the first-person perspective, whether you chose a male or female character matters little, and there’s no armor to collect, equip, or use because you can’t see it. So the focus shifts to the game’s eleven weapons, with five core weapons, and then alternates you’ll find along the way. Mastery of weapons is earned by killing one-hundred enemies with each, which happens easily. The combat arenas you’ll find yourself in, quickly makes things very unSouls-like and more DOOM-like as you can get absolutely swarmed and surrounded. Enemies will follow you for miles if you let them. This is a low point to the combat, to which you have little control of how many will come out of the woodwork. The bountiful fountains which acts as bonfires will ensure you don’t retread too much ground. 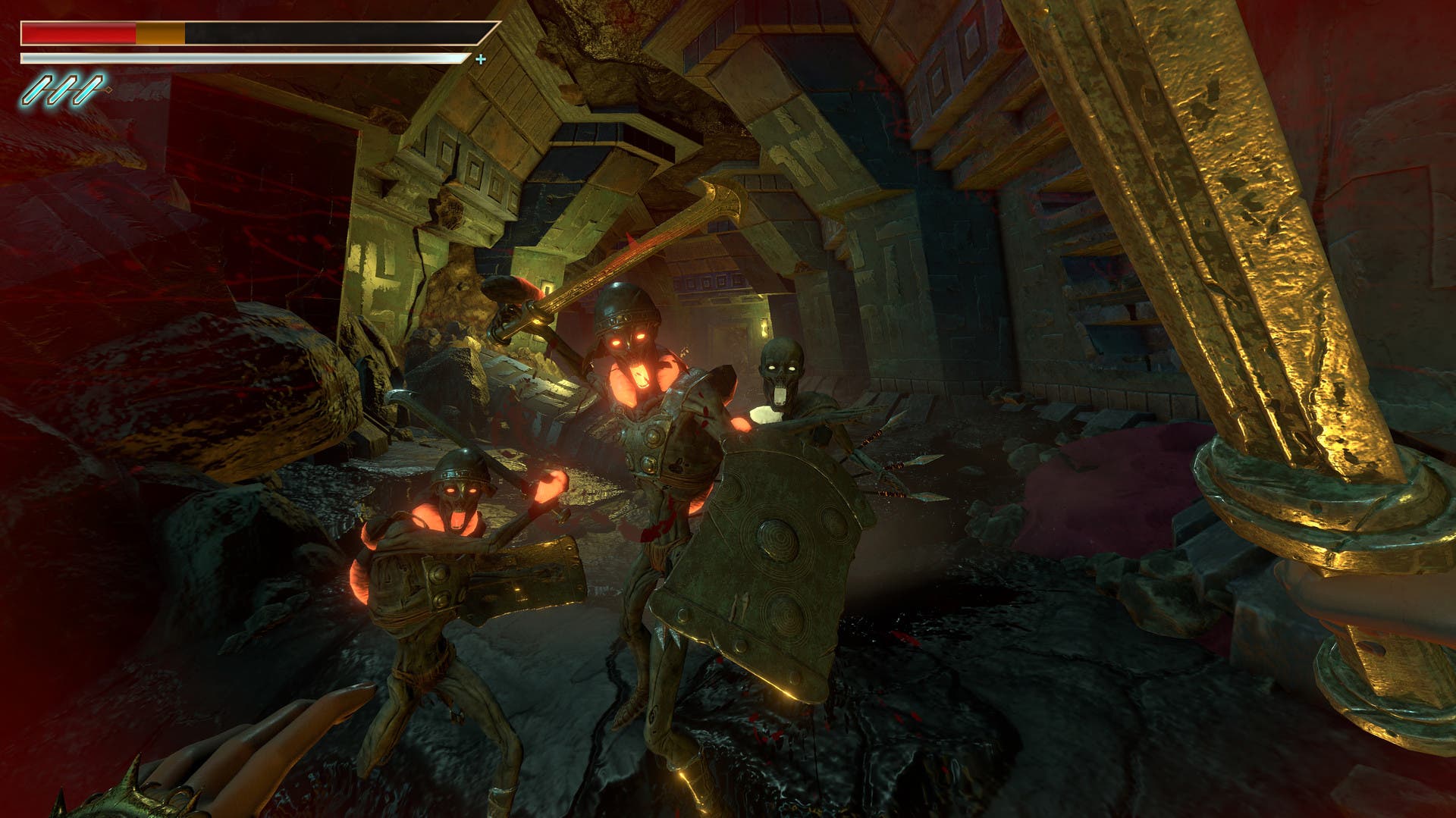 The game features three chapters, with the third one feeling somewhat incomplete. Each chapter is rather straightforward, it’s open and offers minimal exploration. The first chapter takes place in the sewers and winding chasms. The second chapter shifts to desert city shadowed by tall towers. And finally the third chapter is a haze of ancient technology, called the epilogue. And the epilogue doesn’t feature anything interesting or exciting, but instead is a gauntlet of combat arenas that are unrelenting. By this time you’re equipped to handle it, but it’s exhausting to do so. There’s an almost rushed nature to chapter three that’s hard not to notice. It all feels rushed, and ELDERBORN suffers for it.

Often times you’ll come across a collectible like a rune, and when you go to read it, text pops up saying “interesting”. Or when you pickup and item, it displays “this might be useful” — but it only does that on the only useful items you can pickup (you can’t just pickup junk). It’s generally uninteresting and repetitive, and a weird inclusion that didn’t seem to get a pass for polish. 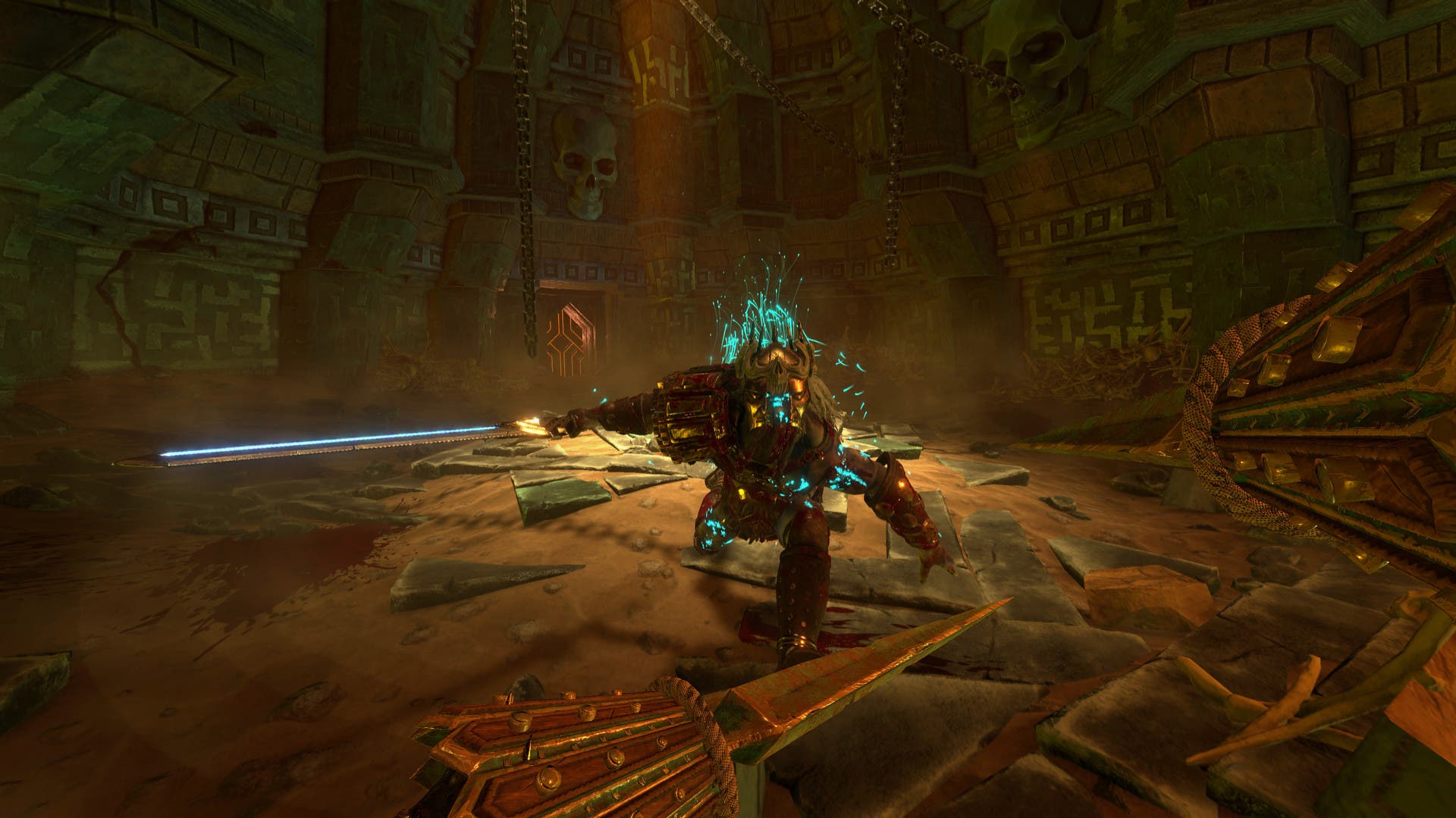 With a game that touts its likeness to something like Dark Souls, it’s awful at introducing its bosses with some grandeur. When it comes time to face one, the boss rises up, yells at you, and you fight without getting to know their name or getting to see even a health bar. Now, the game never shows health bars for any enemies, but one would assume this would be the time you get one. You do get to see bosses take battle damage throughout the fight, which is a really neat alternative to a health bar. I just expected more from these encounters, but fell flat in presenting them to the player.

There are four difficulties: Normal, Hard, Elderborn, and Hard AF. I played the game on Normal and found it to be generally easy to get through the game. I only died a handful of times, and it was usually related to being swarmed or pushed off a ledge by an enemy. Going back and trying higher levels feels much more challenging. 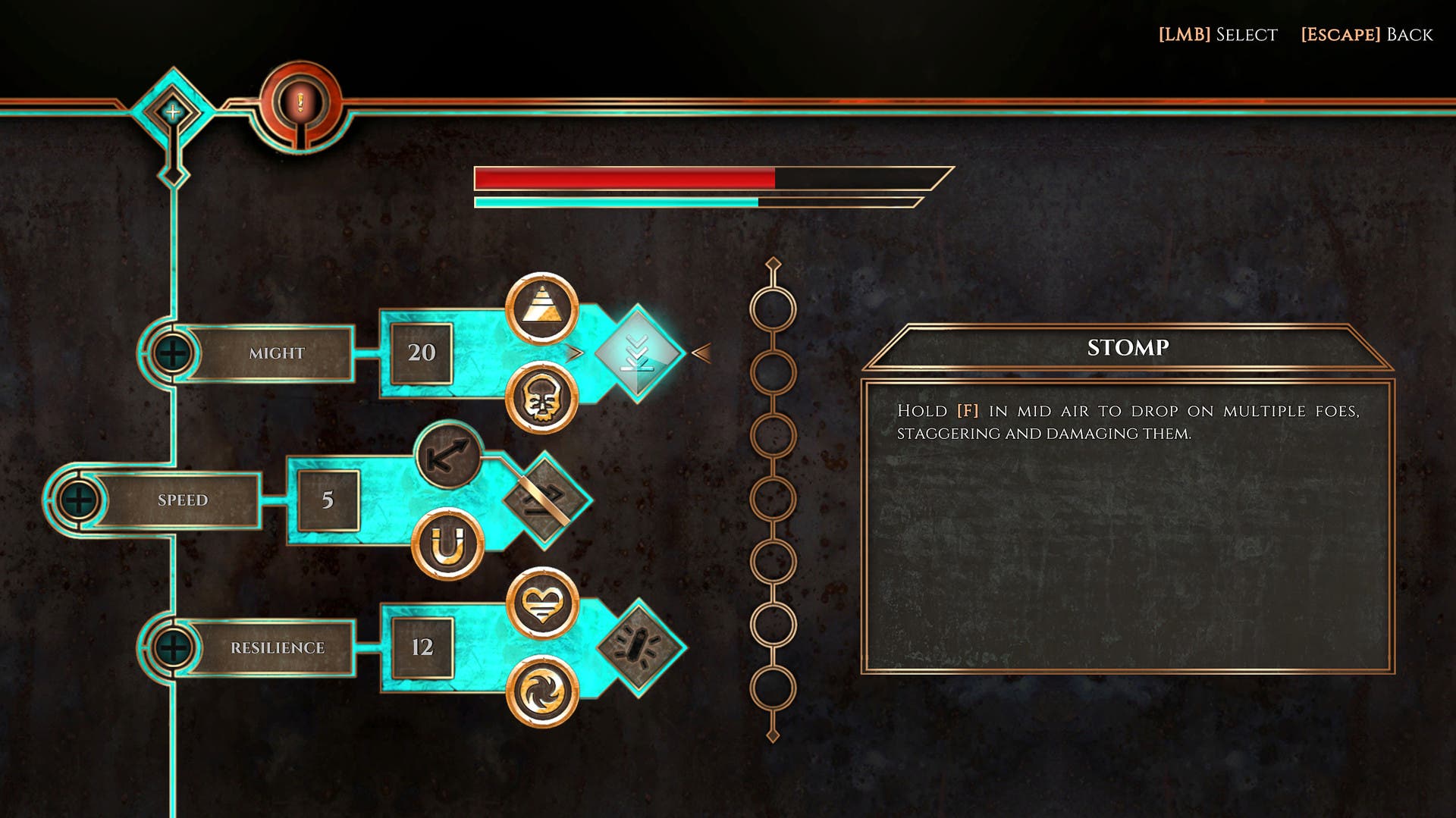 You’ll earn experience points to spend in a very light upgrade system. You can spend your points on Might, which increase the damage output of your melee attacks and skills, Speed, which increases how fast you are able to move and dash, and Resilience, which gives you more health. These are really short, linear paths in terms of upgrades, and there is a fork where you can make a choice on a passive skill, but these matter little and feels under-baked.

ELDERBORN runs on the Unity engine, and is inconsistent with its visuals. Many times it looks absolutely beautiful, and other times it appears as if textures haven’t fully loaded in. Though, you’ll be taken aback at its Gothic monoliths and architecture. The neon-fused enemies offer a really unique, in-cohesive look that does a good job at informing you of what type they are. The game is backed by a kick-ass soundtrack that has its quiet moments, and understands when those are. The game ran at 144fps (capped) no problem, it should run well on any decent PC. 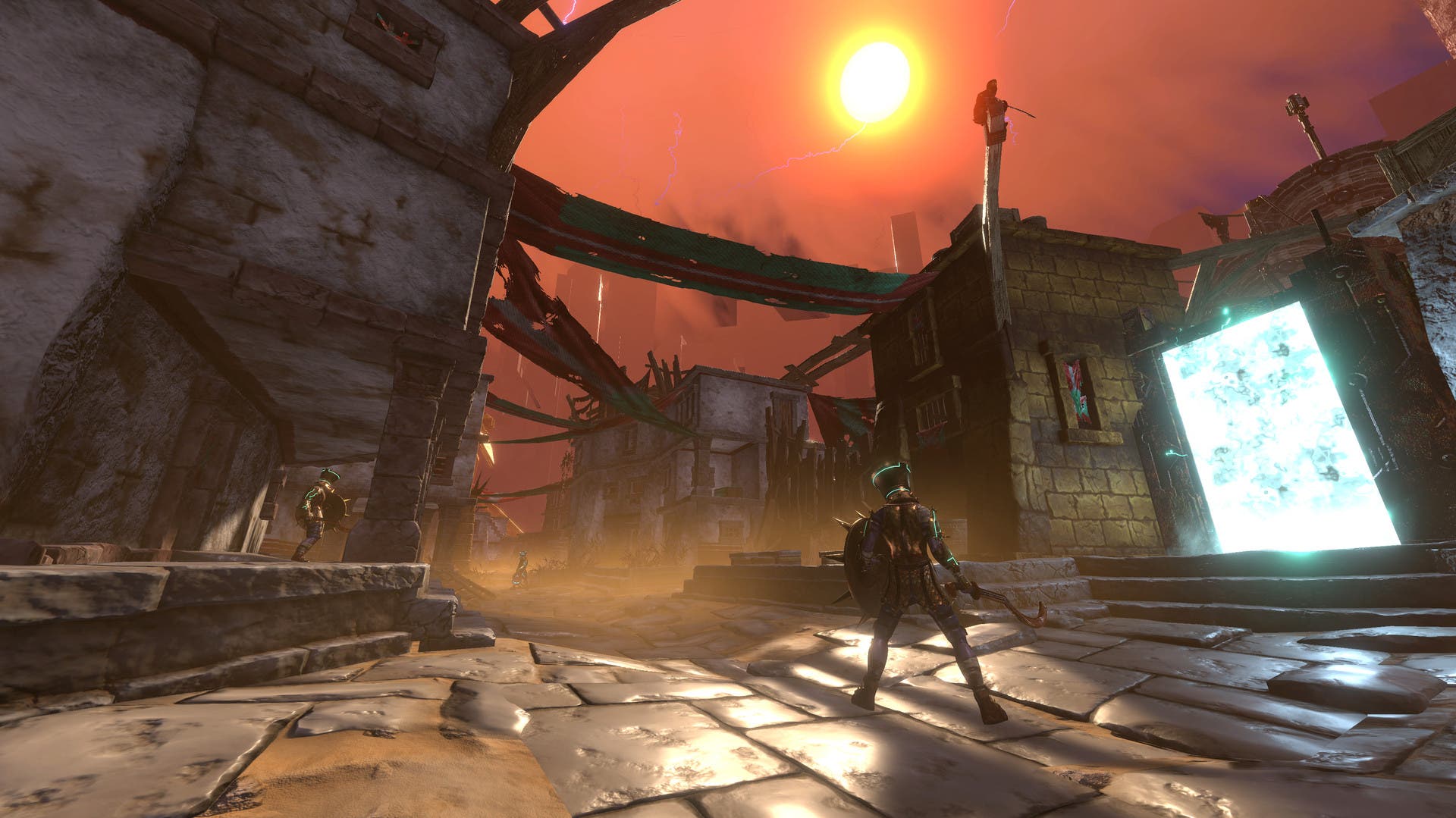 ELDERBORN spent five years in development to include Steam Early Access, and it doesn’t feel like enough still. It’s an unremarkable, yet interesting bite-sized Souls-like that’s worth playing, but at a discount. There’s a lot of squandered opportunity here, but the small team at Hyperstrange clearly has passion and talent. ELDERBORN wears its influences on its sleeve, and I can appreciate that.