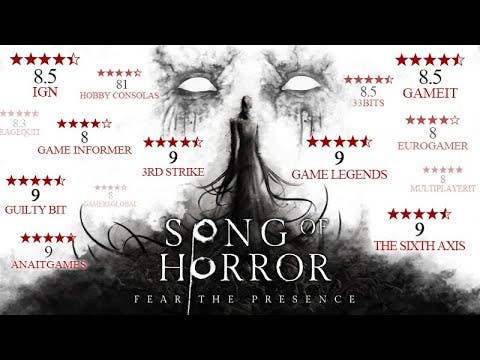 Barcelona, Spain – Tuesday 30th June, 2020: Celebrating the success of Song of Horror, which saw its fifth and final episode launch earlier this month, Raiser Games and Protocol Games can today announce the release of a major update to the game, adding a fresh playable character, brand new paranormal activity, and – most excitingly – a new extreme difficulty mode.

The new H.P. Lovecraft difficulty setting serves as Song of Horror hardest difficulty level yet, noticeably increasing the challenge throughout all five chapters. Players will experience more paranormal events than ever before, and The Presence’s haunting manifestations will be tougher to beat. Coming out on top when playing this new difficulty will also award them a brand new achievement: “The Presence waits dreaming”.

“It stands to reason that, if you play a survival-horror title, the horror element is crucial,” says Carlos G. F. Grupeli, co-founder of Protocol Games. “We want to make sure players who have already completed the whole game can delve back into Song of Horror and take on The Presence once more, but this time with even more mal-intent. We think fans will really enjoy us upping the ante even further with the H.P. Lovecraft difficulty setting.”

To celebrate the update, Raiser Games has also put together a brand new Accolades Trailer that highlights some of the kind words critics have made about Song of Horror, marking it as one of the best survival-horror games in recent time. Song of Horror is also part of the Steam Summer Sale, with a 25 percent discount on offer until July 9th, bringing the price down to £18.74/$18.74/€22.49.

Also included in the free update will be Erica Färber, who is now playable in Episode 5. Erica was previously only available in Episodes 2 and 4. After going through unspeakable horrors at the Abbey of Saint Cecilia and the antique store, a final answer still eludes Erica, and as fans know, she’s not one to sit idly by…

Finally, notable new instances of random paranormal activity will take place in Jeremy Hartwood Mental Hospital, making the adventure through this cursed place even scarier than before!

“This fresh update to Song of Horror is a way of showing that we listen to the fans,” says Sergio de Benito, Marketing Director at Raiser Games. “Song of Horror has a wide and loyal community behind it, and they’d been asking both for a harder difficulty mode and for Erica to be playable in the fifth and final episode. We’re really happy to deliver on those requests to say thank you to the players who have helped make the game such a success.”