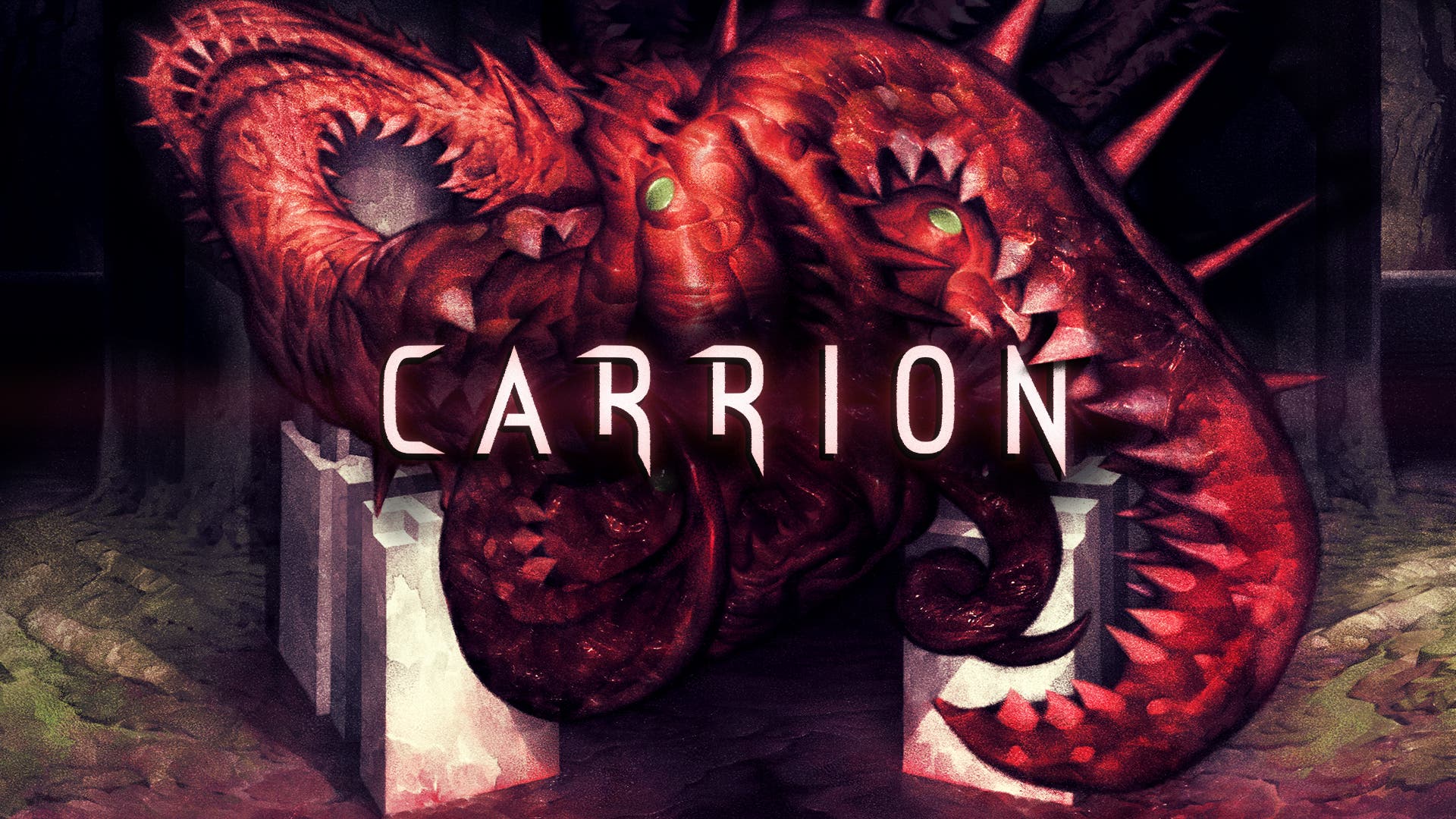 Carrion is a short, focused experience, which is something I really appreciate. It is deliberate in its purpose, and it does a small set of things particularly well, rather than sprawling out in too many different directions. The result is a tight, well-paced romp through a unique take on an action horror game that feels like the take-home version of a pulpy 80's popcorn monster flick. The story is fairly light, but it doesn't need much to be successful, and the game ends on a fun, surprising note that's a pitch-perfect end to the messy journey of destruction and devouring that has come before. There are a lot of fun ideas on the table, most of which are used well (if not to their full potential), and the experience of playing Carrion is equally delightful, disgusting, and satisfying to engage with. You'll probably never get over the unsettling aspect of controlling a writhing mass of angry flesh, but you'll undoubtedly also have a lot of fun with all of the destruction its capable of.

A mysterious rattle echoes through the vents and the lights in the bathroom flicker. A dull, unearthly roaring sound fills the space from every direction. A loud crash a few rooms down the hall sounds, followed by a slippery, slimy chorus of something fleshy spreading around. Frantic, chilling screams erupt and then are quickly muffled and silenced, replaced a clatter of bones and moist, squelching splatter of viscera painting every surface of the room. Silence. Heavy breathing. More rattling in the vents. The bathroom door bursts open and an indistinguishable mass of organic matter fills and becomes the room. More screams from just a few feet away, a horrible gnashing sound and a dull thud as dismembered limbs hit the floor. The mass recedes and leaves a thorough coating of blood and slime behind it. The lone survivor hiding in the stall breathes a sigh of relief, believing the nightmare to be over, and a split second later the grating flies off of the vent above them and a writhing mass of fleshy tentacles grips the survivor and pulls them mercilessly toward three gaping maws of innumerable razor teeth. My maws. My teeth. I devour the pathetic human gleefully, urgently, shaking them about to suck all of their mass into my organs and re-purpose it as part of myself. I am the monster. I am unstoppable.

For most action oriented video games, a lot of what defines the action comes down to fulfillment of power fantasy. More specifically, they focus on giving the player an increasingly significant advantage over enemy combatants, challenging though they may be, in service of realizing some vision of the player as the hero of any given story. It’s fairly predictable but obviously it works considering this is what most of single player action gaming boils down to. Playing as an antihero is an increasingly common variation on the theme, as it allows for some level of subversion of player expectations while still delivering on the core concept of “you get to save the day.” Few games let you play as the villain proper, let alone the antagonist of a horror experience, and this is where Carrion finds its own seldom-explored niche.

This is no subtle “we were the monster all along” plot, nor is it an exploration of moral grey area. You are straight up a nightmarish, Lovecraftian fleshy mass of unknown origin, driven only by your desire to eat, grow larger, and escape the research complex from whence you were presumably discovered. Carrion is described as a reverse horror game, and that is probably the most succinct way possible of putting it. You are the abomination, but in this horror movie you’re also the protagonist, which means here we see what happens when the monster wins. 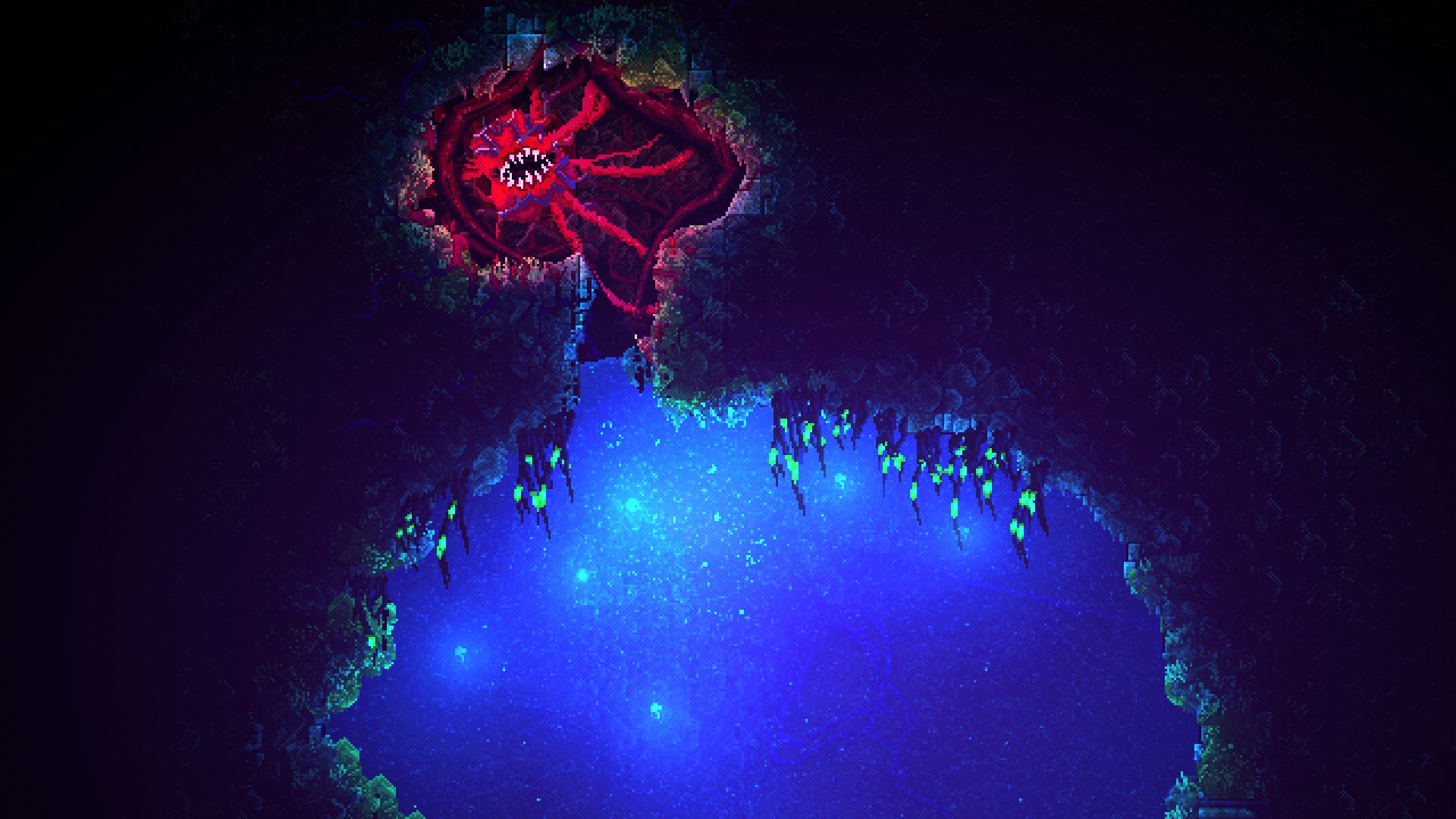 Progressing through the game and adding abilities to the monster’s arsenal make you question why the monster doesn’t win more often in movies and games. I mean, obviously it’s because if the monster DID win so often, these power fantasies wouldn’t work, but given how strong and resilient this creature is and how diverse its abilities are, it paints a picture of a much more grim and possibly realistic outcome in the unlikely event of such a creature ever actually coming to be. Especially in the case of this thing, which only has weaknesses to LOTS of bullets, and sometimes fire, but only enough of a weakness to annoy it or temporarily delay it. And to be fair, Carrion wouldn’t be a very fun game if the monster were weak enough to see you dying frequently (cue the search for the Dark Souls of reverse horror), so tuning this correctly and somewhat unfairly in favor of the player is crucial to the whole thing being entertaining instead of tedious.

So, Carrion is a reverse horror game presented in a lovely pixel-art style with some excellent animation work and artistic detail. It plays like a lite version of a Metroidvania style game, exploring 2D environments broken out into separate screens with a fair number of environmental puzzles to solve and a whole lot of squishy humans to chomp. You won’t do a huge amount of backtracking in Carrion unless you want to pick up the relatively reasonable number of enhancement items that aren’t really necessary but do make the last stretch of the game easier, which I think is a smart choice for a game that only takes about four hours to complete. 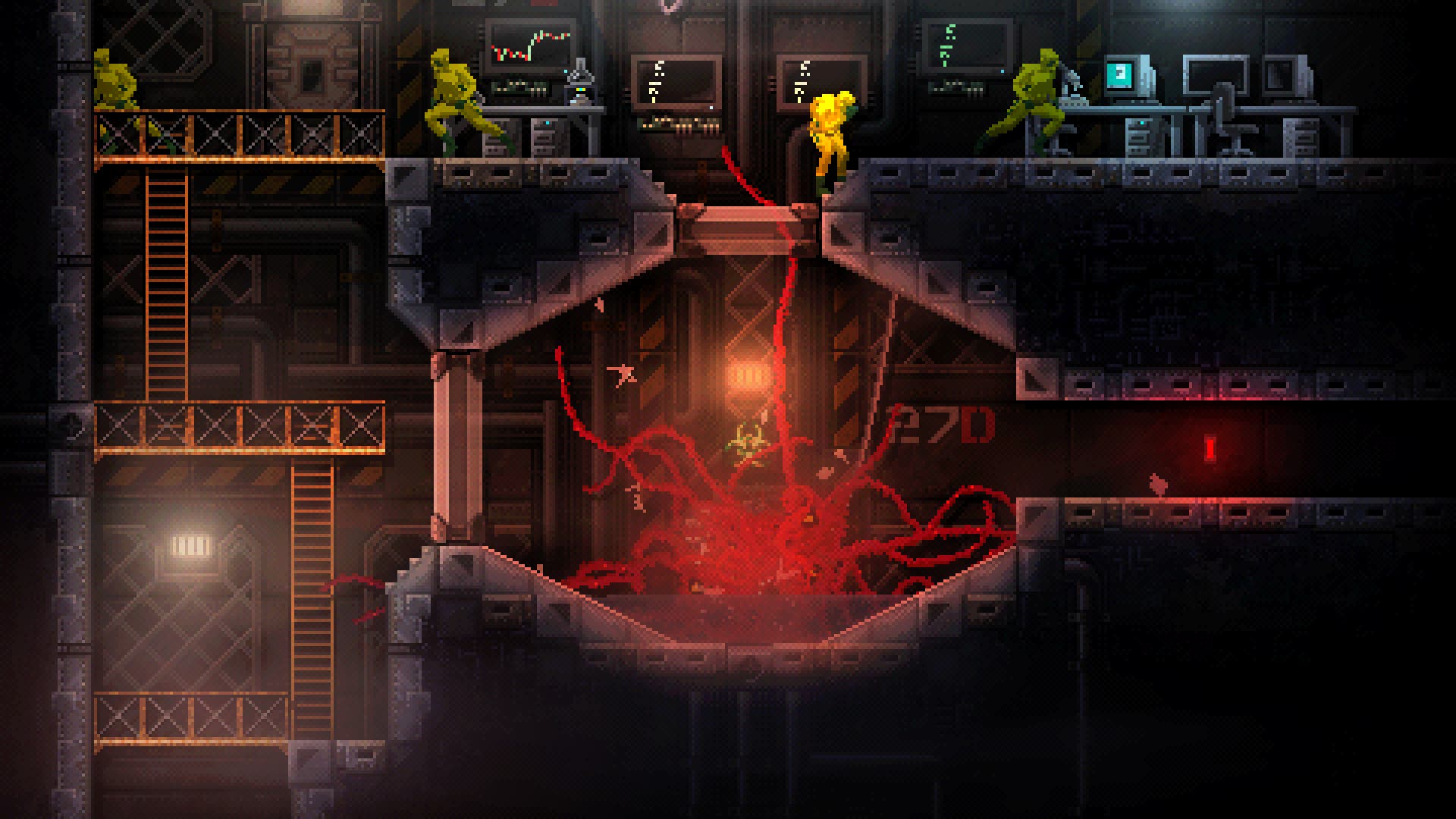 You spend your time slithering through corridors, infesting rooms and holes, eAtINg AnD grOWiNg, and gaining access to new capabilities at a fairly regular clip that helps keep the momentum of the game humming along at a brisk pace. One of the most clever aspects of Carrion‘s game design is that the monster can exist in three different “forms” (which are truthfully just specifically designed zones on its overall spectrum of size/number of mouths and tentacles), and most of your abilities are locked to one of these three forms. This forces you at several points to deliberately shift downward in overall size and lethality by depositing a sac of biomass into a suitable pool of fluid so that you can access the particular ability set that will allow you to “solve” a given room and unlock a permanent path through it. Some of your abilities share traits (for example, both your medium form’s “Oh Lawd, It Smashin'” ability and your large form’s “Oops, All Tentacle Spikes” ability both allow you to break wooden walls and structures), and the “You Work For Me Now Tentacle” ability persists across multiple forms, while most have specific purposes that can only be accessed at that size (see: small form’s “Where Did That Bastard Go?” and large form’s “Ha Ha That’s a Cute Explosive You Have There”).

Of all the tricks Carrion has up its, uh, sleeve(?), this is probably the best among them and I almost wish it had been put to more use, and that there had been more experimentation with the idea. There’s a groundwork laid here for some really devilishly clever environmental puzzles that doesn’t get capitalized upon, but on the other hand going too far down that path would likely have unnecessarily inflated the game to a length that would have been in competition with the very deliberate pacing and constant sense of forward momentum that makes much of Carrion work. 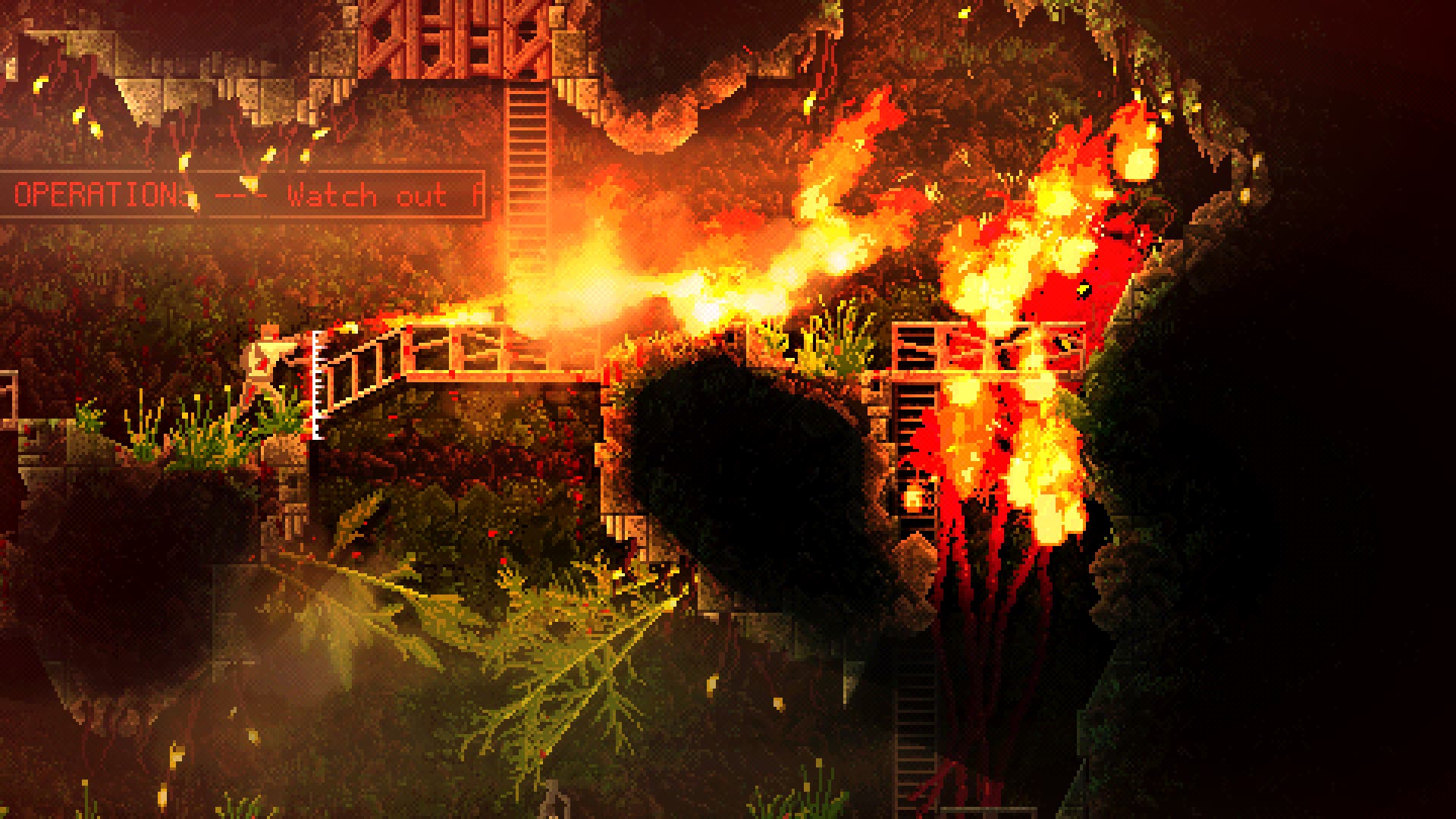 Rooms are typically designed with multiple paths through which you can slither and use to your advantage to terrify and trick your human prey, so you can pull classic monster tricks like roaring from the inside of one vent only to burst through a door on the opposite wall a second later to grab the overconfident armed guard with an assault rifle while the other scientists scream. Later areas of the game will throw more armed enemies at you that you need to plan more strategically for dealing with, and just busting into the middle of the fray as your big bad self will very likely result in getting yourself killed, and so you do have to think more like an awful, amorphous creature from sci-fi horror in how you plan your attacks, and balance patience with well-timed strikes at vulnerable prey. Combat situations tend to feel more like puzzles than straight up action sequences, and that makes emerging inevitably victorious feel even more rewarding, especially in cases where you may have been reduced down to your last few ounces of matter, barely slithering away to brood and terrorize again. 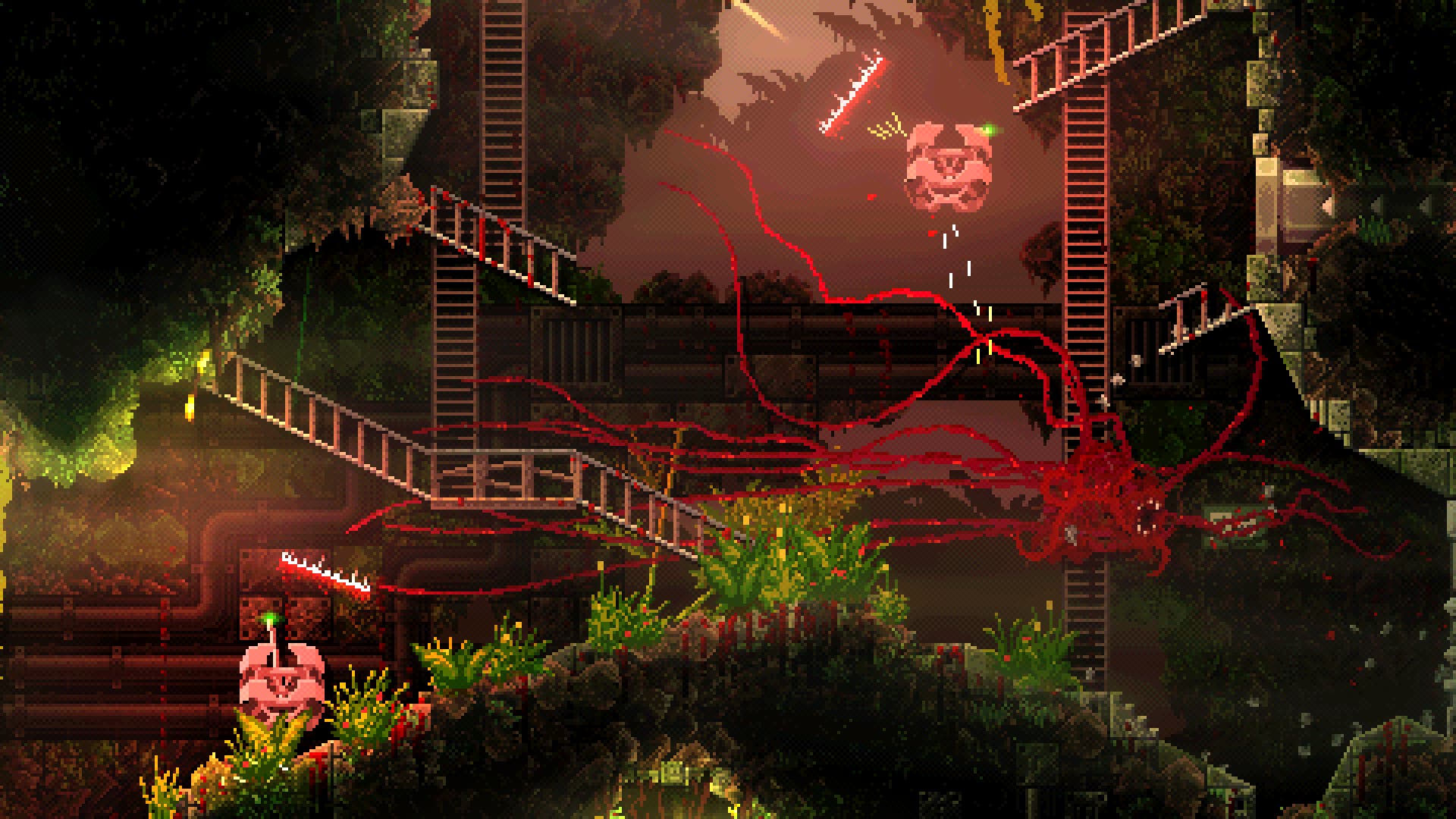 Carrion is a short, focused experience, which is something I really appreciate. It is deliberate in its purpose, and it does a small set of things particularly well, rather than sprawling out in too many different directions. The result is a tight, well-paced romp through a unique take on an action horror game that feels like the take-home version of a pulpy 80’s popcorn monster flick. The story is fairly light, but it doesn’t need much to be successful, and the game ends on a fun, surprising note that’s a pitch-perfect end to the messy journey of destruction and devouring that has come before. There are a lot of fun ideas on the table, most of which are used well (if not to their full potential), and the experience of playing Carrion is equally delightful, disgusting, and satisfying to engage with. You’ll probably never get over the unsettling aspect of controlling a writhing mass of angry flesh, but you’ll undoubtedly also have a lot of fun with all of the destruction its capable of.