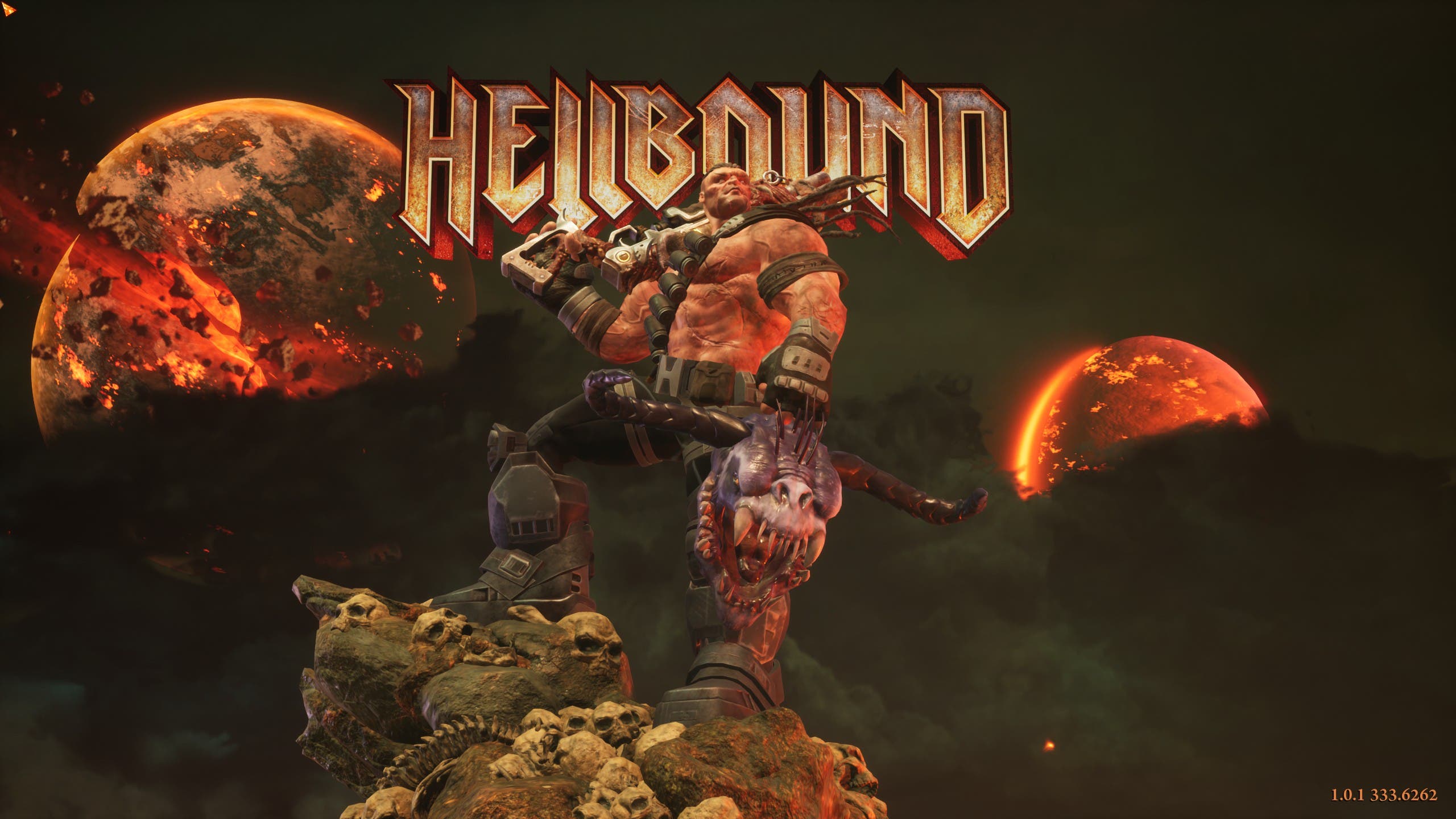 Saibot Studios’ Hellbound comes after a long-line of retro FPS’ to try to stake its claim on 90s throwback nostalgia. While it’s an honest effort, it pales in comparison to others in this sub-genre. Hellbound is often anachronistic, revealing the dichtomy of making a game that is both modern and retro, and never really nailing either. Hellbound gets a few things wrong, but makes it right in letting you obliterate demons with great impunity.

The developer’s revel in the fact that Hellbound is light on story; this is fine by me, let’s get into the action. However, early marketing material for the game asked, “Remember the time when gameplay was king?” — I completed the game in under two hours, seeing everything that the single-player campaign mode had to offer, save for going back to find all of the secrets, I suppose. This is painfully short. A first-person shooter with only seven campaign levels, and they can be completed in mere minutes if going for speed? That’s not demonstrate having gameplay being treated as royalty. It feels like the first episode of many that never come to pass, than a complete arc. Hellbound simply feels unfinished, even (spoiler, if you care for that sort of thing) the last still of the game suggests that there’s more to do. Whether it be DLC or a sequel, this doesn’t come off as a positive.

You play as Hellgore, initially armed with only his fists, but it won’t be long before you get your hands on your first weapon. Soon after you’ll get a more powerful weapon in the form of a bat (why even have fists?). Hellbound offers a triple shotgun which packs an incredible punch. From there you’ll have a minigun and a rocket launcher to even things out and complete the checklist for a first-person shooter arsenal. There are secondary actions on all weapons, the rifle and minigun have aim-down-sights, which is very unretro of it. And the rocket launch drops a grenade at your feet, perfect for circle strafing or running backwards while shooting, the enemies fall for it every time. Hellgore is fast, turn on “always sprint” and you’ll be untouchable. There are also powers you can pickup that will temporary amplify damage and offer protection. You don’t really need them unless you’re playing on higher difficulties. 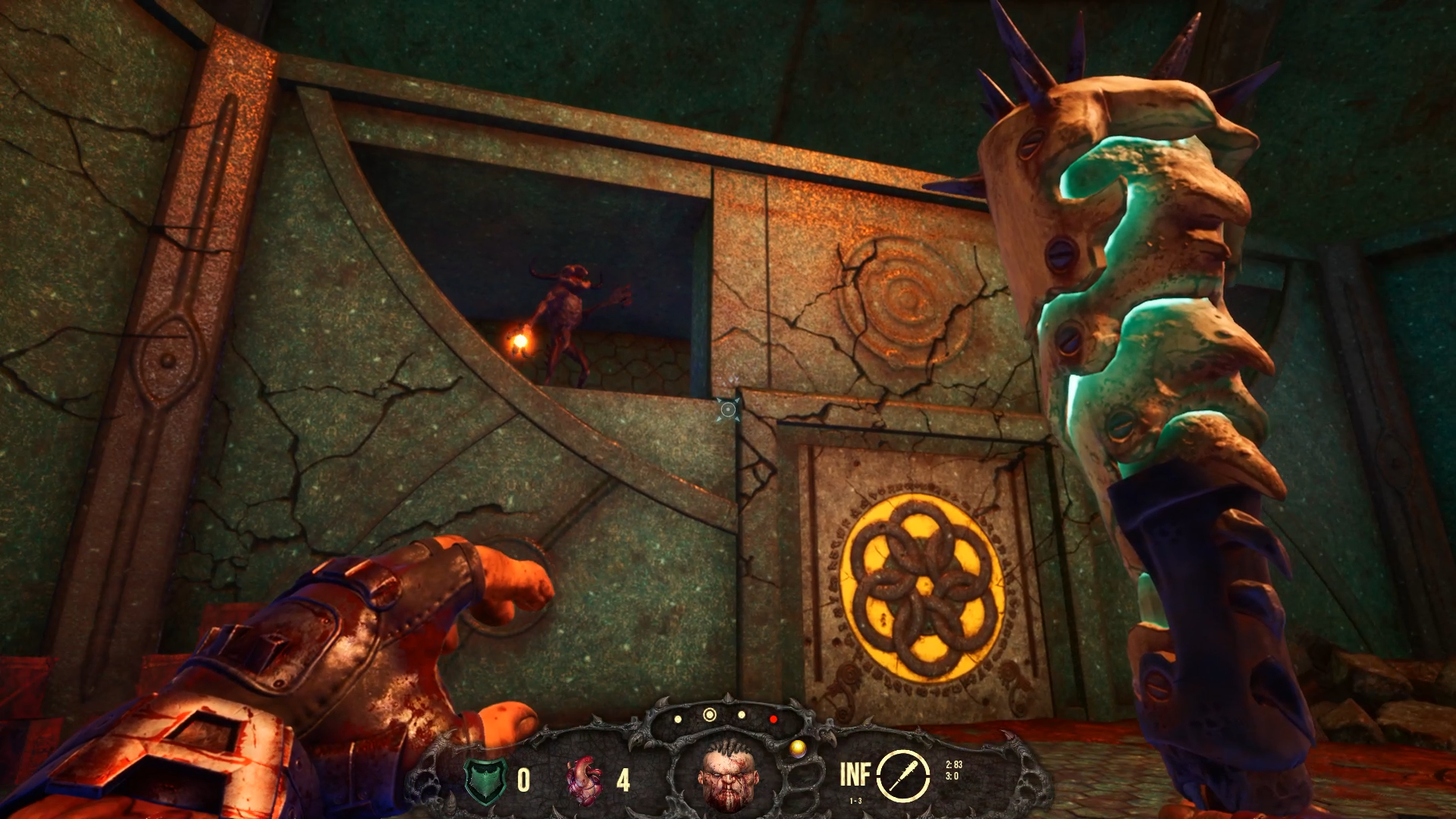 The game is challenging, but not difficult, at least on Normal. There are four difficulties: Noob, Normal, Old School, and Hellmare. I’m not a fan of the insulting title of first offering, but Normal should be enough for anyone who’s played a first-person shooter before. Getting through levels is pretty straightforward, even if the pathing or overall design of them isn’t. At the end you’re greeted with a familiar screen that highlights if you got all of the kills, items, and secrets in the form of a percentage. Then your time is compared to the par time of the developer. There’s some incentive to go back and do better, and find all the things, but not for long. For the truly invested, you can test yourself by replaying older levels on Hellmare and trying to make it out alive with 100% on all parts.

Now, the game demo originally showcased a Survival Mode, which is still present in the main game, with the exception of the map from that demo. The game then moved to Kickstarter so it could receive a campaign to pad things out. The result is a fuller game, but not a richer experience for it. Hellgore is voiced sparsely, and essentially underutilized. He quips (badly) and grunts (even worse), but there’s a real Serious Sam vibe coming out of this character. The game’s insistence on survival permeates in the levels as you’ll have to survive several minutes or waves before being able to exit.

Hellbound offers no achievements or a multiplayer component. Both of which are fine, and are an aspect of the time that the developer is emulating. It does however, have an abundance of the word “fuck”. It feels forced, and pretty much is. It’s not that it wasn’t used in 90s-era shooters, it just wasn’t so blatant in putting it in text, and certainly not in menus. The visuals to the game help bring it into the modern era without looking old but everything else in the periphery makes it feel old, and not in a good way.

By comparison, games like DUSK, Ion Fury, WRATH, and AMID EVIL all do something different in the first-person shooter genre that make you recall a specific time and place in your life. It nails the core components first and foremost, then carves its own path. Hellbound by its very design, does neither. It forges new memories, but necessarily the ones you want. I think at the core of it, the blend of modern visuals with retro gameplay just doesn’t work, causing me to be so on the fence about it. Because while the gameplay is often shallow, the game can look really beautiful (really only on certain levels), and bashing demons to bits is never not satisfying.

The game isn’t very buggy, but there’s too many times for me to count where an enemy would appear out of thin air, without an animation – just POOF! there is he is. This only seemed to happen with a certain type of enemy, as others would have an entry animation. There are an unfortunate number of first-person platforming sequences that are downright bad, and completely unfun to navigate. This forced me to forego secrets in favor of my sanity. The game is rather hefty, weighing in at 20GB for what is essentially eleven levels between the campaign and survival modes, and just seems far too big and uncompressed for what you get. Lastly, during the final boss battle, the game slows to a crawl as demons are spawned in as you work the boss’ health down to zero to win the game. I’ve got a brand new PC, with one of the best CPUs and GPUs out there, so this is rather unacceptable.

Hellbound isn’t a bad game. It can still be enjoyed, so long as you get it on a steep sale and you’ve got a spare afternoon for some mindless killing. This is a first-person shooter that emulates the past, but fails to recapture the magic of it. When you just turn your brain off, the game is at its best, but it just doesn’t last long. With a woefully short campaign mode, and a repetitive wave-based survival mode, Hellbound is surprisingly… deficient.