Stop me if you’ve heard this one before: a boulder rolls into a barn… and a house… and through some massive stone walls, and all the way into a castle and makes a tiny person go squish. If this sounds remotely familiar to you, then you’ve probably played Rock of Ages and/or Rock of Ages 2. They’re fun games! When the first one debuted back in 2011, it was a fairly novel spin on the tower defense (and offense) genre, and it made its mark with a unique sense of humor and presentation that felt like a breath of fresh air. Now, nine years and two sequels later, even though there’s still fun to be had in rolling giant boulders down obstacle courses, the formula is feeling less original and more in need of evolution. 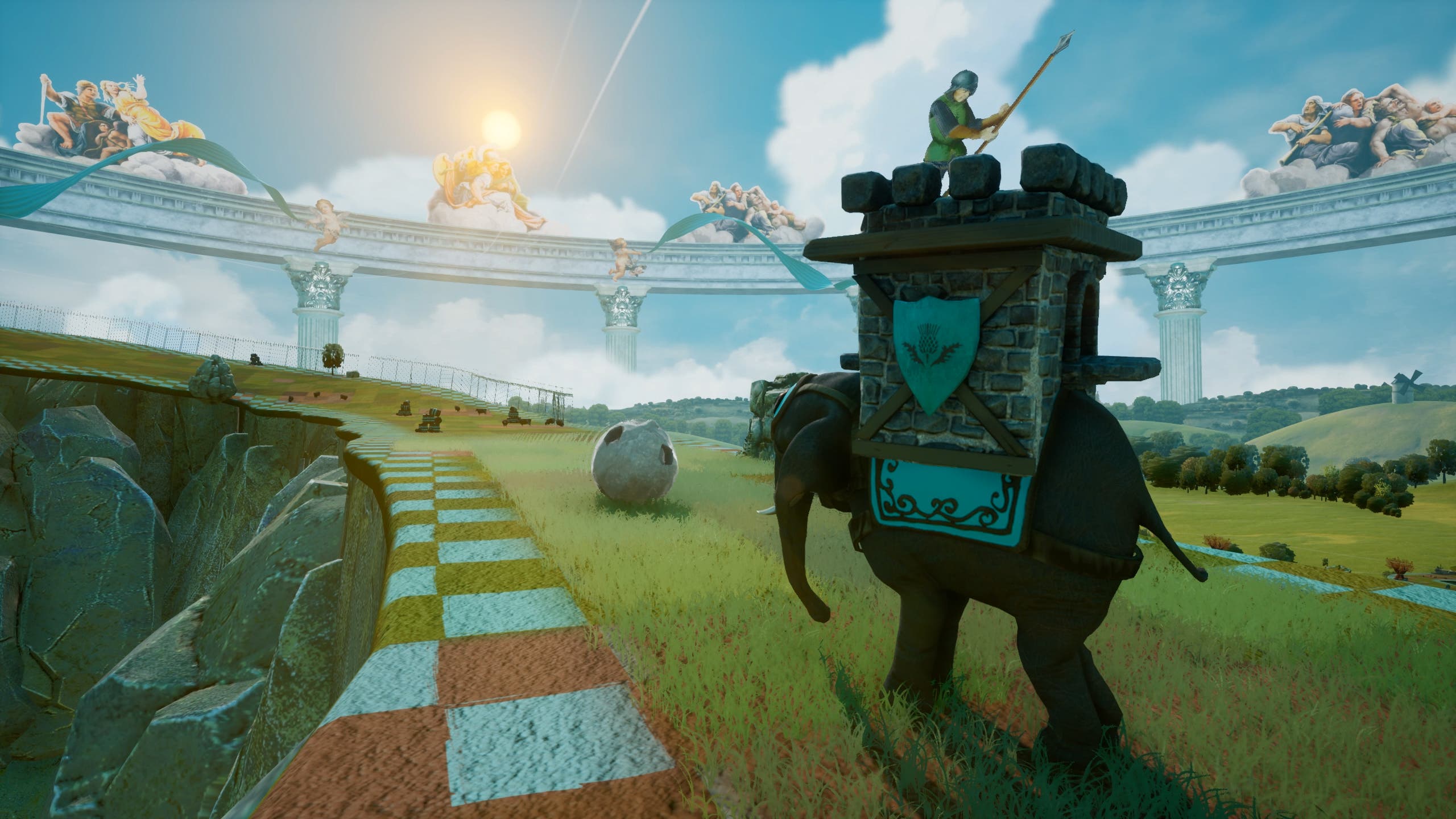 Rock of Ages 3: Make and Break is clearly aware that it has carved itself out a fairly specific niche and does make a decent effort to find new ways to play with the concepts you’ve already come to know. As usual, the game sports offense and defense modes of play, in which you take turns either rolling your big dang rock down the course and avoiding obstacles to break down the doors of the castle at the bottom (arguably still the best thing this game has going for it), or constructing your own defenses on a course to prevent some other historical big bad’s big dang rock from breaking down the doors of your castle.

Following in the footsteps of the previous two games, the bulk of Rock of Ages 3‘s big rock rollin’ action takes place in the campaign mode, where you’ll embark on a journey through history with cut scenes and humor inspired heavily by Monty Python-esque animations, which is fortunately still so under-utilized that it remains effective and entertaining as a storytelling device. The ante has been upped here by utilizing cut scene artwork made directly in the style of the age and culture that’s currently the focus of the story, and that art style and theme is carried over into the courses themselves, bringing a level of cohesion between the story and the actual gameplay the series has not achieved before. The animations are really wonderfully done, and seeing the likes of ancient Greek terracotta pot paintings translated into moving stories and actual course design is a really inspired choice.

Visually speaking, the game is very pretty to look at, especially in the way different historical periods are rendered and represented within the courses in ways that are simultaneously consistent with the series’ overall style and in honor of the prevailing artistic movement of the given age. It performs extremely well and feels responsive and smooth, which is crucial when your boulder is hurtling down a mountain at breakneck speed and you’ve got to make fine adjustments to its path to thread the needle between the trap platforms that will toss you off the edge and the lions strapped to balloons that will inexplicably attempt to maul your surface in service of slowing you down on your journey to the bottom.

Rock of Ages 3 looks to further shake things up by adding additional objectives to the campaign mode, so that you’re no longer just attacking and defending to make progress, but engaging in time trials that feel akin to a bigger, comically clunkier version of Marble Blast: Ultra, destruction-based runs that culminate in a giant skee-ball game at the end, and resource-limited defense runs that require critical thinking and offer a greater challenge than the typical defensive engagement. What’s also nice is that because the game uses the concept of collecting stars to gate progress, you can choose not to engage with modes you don’t like and still progress through the game just fine. I think adding more ways to play with the core concept is a smart move here, even though the variations are ultimately subtle. I realize that the way the boulders move is more or less the foundation everything is built upon, but I would like to have seen things get stretched a little further and perhaps even seen adjustments with rolling and movement mechanics, as I often find steering the boulders just doesn’t feel quite as tight as I’d like it to.

Also new to Rock of Ages 3: Make and Break is the all-new “Make” mode, which you may have already correctly guessed to be a level creation tool. Level editors are becoming more and more commonplace in run-based games, but putting together an intuitive and relatively simple set of tools to assist with that task can be incredibly challenging. Surprisingly, the level creator in Rock of Ages 3 is pretty good, making it fairly easy to draw out paths for rocks, shape them into whatever you might have in mind, and decorate them as you see fit. New courses start off with premade “start” and “end” points, and you need only begin drawing paths into the terrain to start building your course that connects the two. Paths are populated with “nodes” which allow you to manipulate the position and height of any given stretch of pathway. For the most part, making paths “just works”, with the game taking its best guess about your intentions from the line you drew initially and giving you ample opportunity to fine-tune to your liking.

You have to place all of your own decorations, obstacles, and enemy spawns along the courses (this is not totally surprising but still worth noting that cosmetic flourishes don’t come for free; you gotta place those vases yourself), and you’re given an extremely generous “budget” of objects and course complexity to work with. You can play your courses from the beginning, or pick any point along to start from so you can test a specific area you’re working on at will. The tutorial for the editor is well built and the menus are easy to work with, and overall I think this is a competent, even quality level set of creation tools, which is notable particularly for any creation tool that has to work in three dimensional space. Whether there’s long tail value in the level editing tools is another question altogether. As somebody who specifically got a lot of runway out of the Super Mario Maker games due to my own long history and fandom of that series, I imagine that for Rock of Ages series fans this could be a big selling point. I’m not convinced that generating or playing user-created content is a big enough reason to play the game on its own, though, so much as a possibly nice bonus on top of another iterative campaign.

Rock of Ages 3: Make and Break is not a bad game by any stretch, but what was once a promising, unique idea is itself beginning to feel somewhat rote. The game looks great and runs very well, and playing it is absolutely a fine experience, I just never really felt the pull to keep going and had to dig to find the fun in all of it. It may just be series fatigue, and the fact that I played Rock of Ages 2 a little over a year ago, but for all that Rock of Ages 3 adds to its own pantheon of tricks, it doesn’t quite go far enough for me to eagerly recommend it, which is a shame because it may be the most robust offering in the series yet. There’s definitely joy to be found here, but only for the right person who either really loves Rock of Ages, or somebody who’s been waiting for just the right time to jump in.