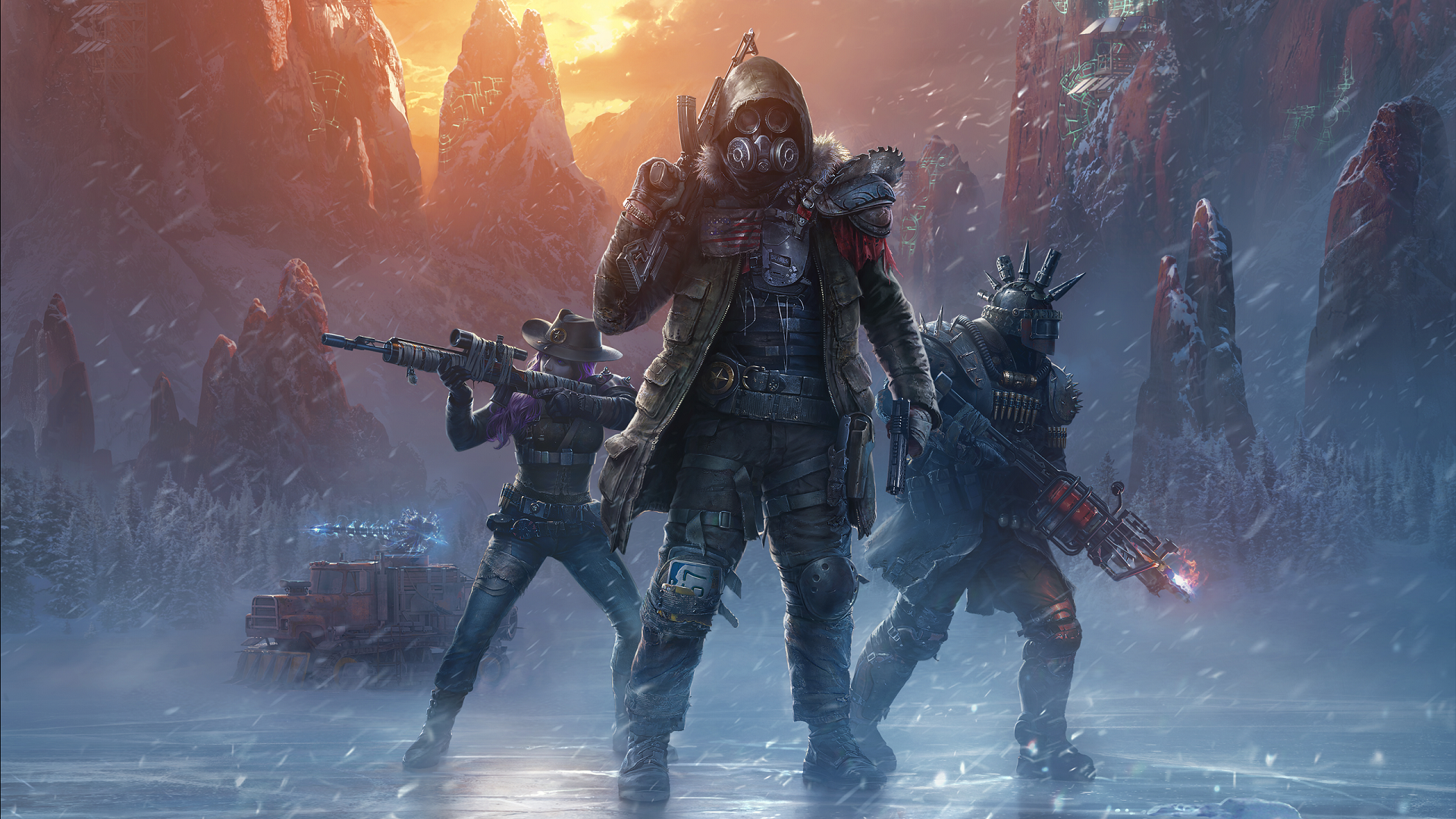 I met a feline named Major Tomcat who was very curious with our group, and didn’t run away when approached. I searched through my inventory for something to give it, and all I could find was a pack of smokes. Hesitantly, I offered them to the cat, and it instantly joined my party. I couldn’t command them, or tell it what to do, but the cat became loyal to us and a Ranger itself. These are the moments in Wasteland 3 that showcase the goofy side of inXile Entertainment’s post-apocalyptic cRPG. It takes itself seriously, but knows when to have fun. It’s clear inXile learned a lot of lessons with Wasteland 2 here, as nearly everything else has had a facelift or a substantial improvement. Wasteland 3 is a deep RPG with dark storytelling, and has damn excellent turn-based combat that’ll have you daydreaming of what you’ll be doing next. Wasteland 3 picks up a few years after the conclusion of Wasteland 2. Without spoiling the events of that game (while the game certainly does), Wasteland 3 chooses an ending from that game’s possible choices as canon. Now you and the Desert Rangers have left Arizona and California behind. You receive a distress call to help the people of Colorado, only you’re barely survive a deadly ambush — welcome to Colorado.

After fighting your way out of the wreckage, you’ll find solace in an old base in Colorado Springs, and meet The Patriarch. You’ll learn that there’s a lot of chaos in the state, and it needs tending to. Especially The Patriarch’s three kids, and handling them as you see fit to re-unite Colorado. You’ll be dispatched all across the state, visiting locations like Aspen, Denver, and other random locations, often distracted by various tasks and quests, all while building up your headquarters, and meeting various individuals like death-dealing clowns and a faction built off of monster movies, with its leader Flab the Inhaler. Brian Fargo continues the trend of being an NPC in his own creations. In The Bards Tale IV: Barrow’s Deep, I met an NPC named Faryn Brygo. Here in Wasteland 3, I’ve encountered a descendant, Faran Brygo. While there’s less memorable playable characters for your party, unforgettable NPCs take their place. You can choose from five pre-built pairs of individuals that give you a strong base to work from. But for those who like to create characters from scratch, there’s lots of customization from name to appearance to starting weapon and of course attributes, skills, and even quirks. Quirks offer buffs and debuffs to your characters, and are only available for custom made creations. You’re given fourteen points to allocate at first, selecting their background what makes them. There’s really no loss to using any one of the premade duos, but there’s a certain satisfaction of creating everyone who eventually make-up your party. You can have a maximum of six people in your party, made up of companions who you meet in the wastes and willfully join you, or those you recruit from a set pool of other pre-made characters. It’s worth noting that by having certain companions in your party, can drastically change conversations and even some outcomes of the game. For a while, I had continued doing quest after quest, avoiding goign back to Ranger HQ. Once I had, people had begun populating the once dormant base and I was able to recruit the remaining slots of people to fill out my squad. This made combat and nearly every aspect of exploration better. As a general note, it’s paramount having a well-rounded party, so you don’t double up on skills or ammo to make anyone or anything redundant. It’s best to keep everyone’s skills minimal, as a jack-of-all-trades won’t do you well.

I never found myself preoccupied with the act of choice as I have in other RPGs. I tended to make my decision, and deal with whatever the consequences were. You can reload a save to see if there’s a different outcome, but more often than not, you’ll roll with whatever you choice. It’s never clear cut as to what’s the right or wrong choice, as those won’t come into play for minutes to hours later on. And that’s how it should be. Similar to an early choice in Wasteland 2, you’ll be given a two quests at the same time, and be forced to choose one or the other. There’s absolutely no way to do both, so the game teaches you these harsh realities early and often. Quests in Wasteland 3 reveal themselves like like Matryoshka dolls. You complete one stage, and it begins another that was inside of it, and so on and so forth. This is a game bigger than it seems, and you’ll easily spend 80-100 hours in the wastes. 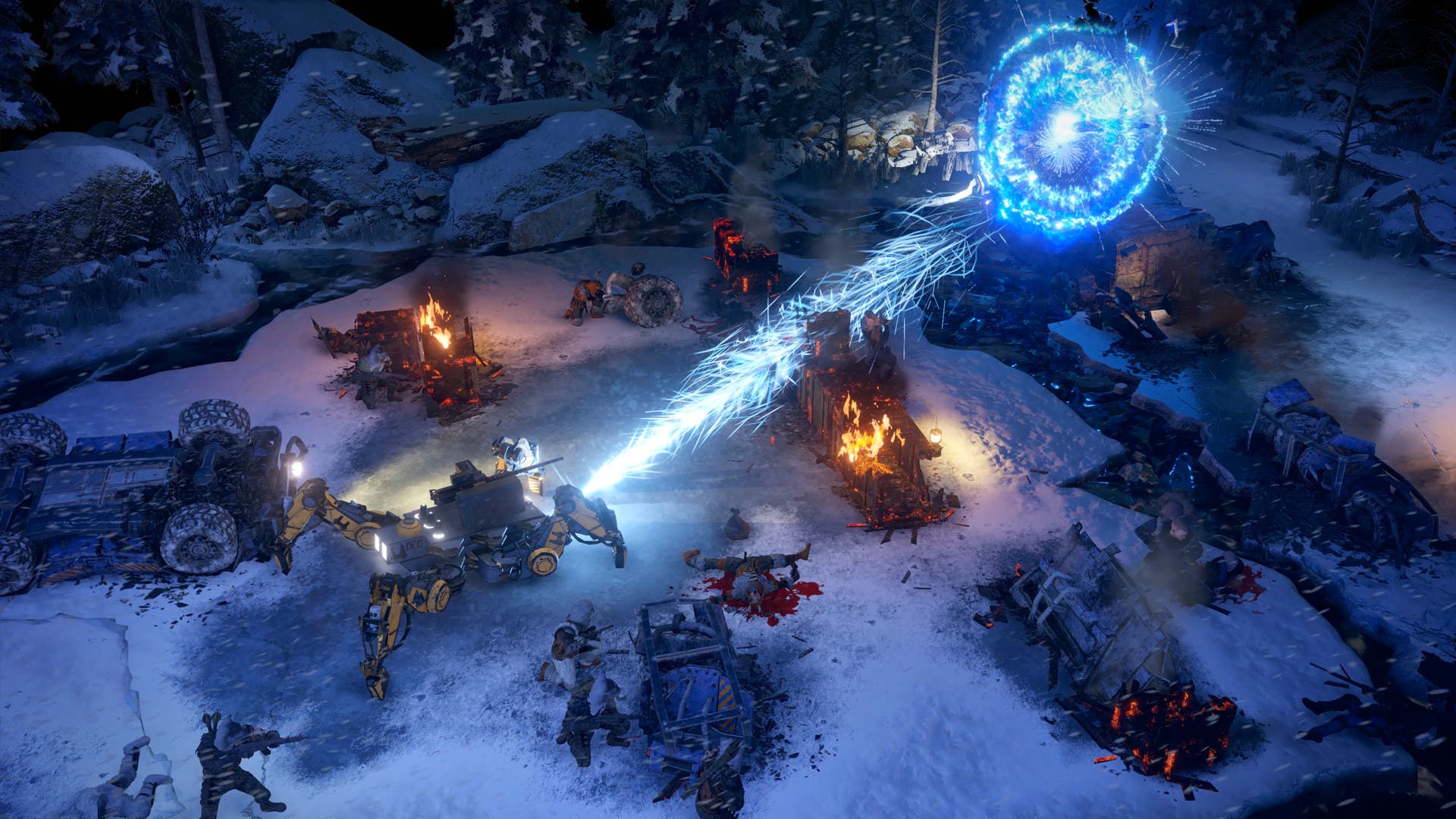 There’s a considerable difference when playing on Rookie or Wastelander than when playing on Ranger or Supreme Jerk difficulties, as friendly fire gets turned on. So choose wisely, as those’ll be the things you have to consider. Combat is straight-up fun this time around. , excitement takes over. For the first time, you can now crouch to better conceal yourself, and use it as a means to initiate combat on unsuspecting enemies. Of course, from the moment the neon-infused grid fills the screen, it’s always the same: putting your people into position with accompanying cover, and utilizing their weapons and skills. Sometimes encounters that take 10-15 minutes to complete, resulting in a war of attrition. You have action points with each character, and that changes for how they’re specced out. But you can always put points into reserve, use it for defense, or even ambush an enemy like in an overwatch state. Get enough successive hits, and you can initiate a strike which will allow you to target a body part for maximum damage. Having a 90% chance to hit actually means something in this game, so it’s really rewarding to be placed properly, in the right proximity and nail that life-saving shot that would have put you at the game over screen as you and the party get out of there with serious injuries. You can now modify weapons and armor with parts that offer unique bonuses for the characters that wield them. Out of combat, you’ll need to heal. From there, you have real-time movement to treat wounds and move on to the next part of the quest.

Quests are broken up between primary and secondary, but secondary quests are often the most rewarding, and have the most interesting things going on. They’re also color-coded, so when it’s white it means it is on your level, green is a quest below your level, and red is a quest you shouldn’t be attempting just yet until you’re stronger. It’s simple and easy to follow. A complaint of the last game is that it wasn’t clear what to do, and the game doesn’t like to hold your hand, but you are given a few more hints this time around, and the game will mark locations for you on the map. I nearly got stuck trying to gain entry to an area early on. So I decided to just go explore, I ran into what was seemingly a random gang. After wiping them out, I had gotten the access I was seeking, but it wasn’t what or who the quest was guiding me towards. It still completed, and is an example of how there’s multiple approaches to completing any given quest. This is where Wasteland 3 feels its most flexible and dynamic. 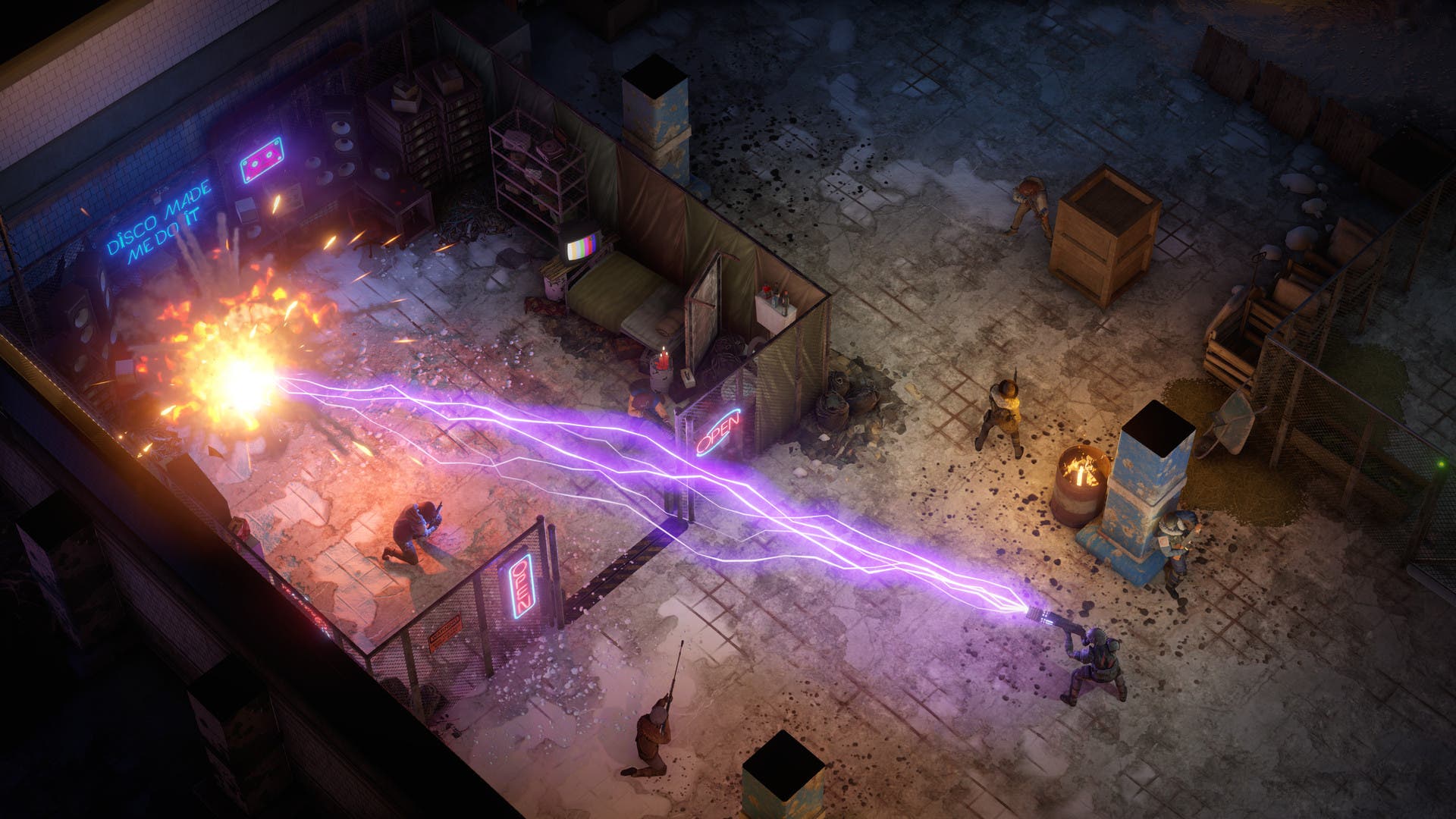 Fame with factions is crucial. You can do your best to please them all, but over time you’ll have to start choosing a side over another and eventually someone will get mad. This is just how it works, and a flash of your badge doesn’t always mean something to everyone. Some will be impressed, and others not so much. During dialogue, there will often be skill-checks to complete certain actions. They can be soft gates towards progression, or hard gates in progressing to the next task. You can back out of conversation, and try it again after leveling up, but you may not always have the chance. On the bigger NPCs and boss types, you’ll have the option to arrest or kill them. Some in your party may not agree with either decision, but it’s up to you how to play it.

Being in Colorado, what with the snow and the cold, I expected there to be debuffs for spending too much time in the cold. Thankfully that’s not the case here, and know that you’ll be properly bundled up each time you venture out. Something new for the series, is that you now get a vehicle named the Kodiak to traverse the overworld map with. It’s much more fleshed out this time, rather than an arrow on a map. You’ll drive it around, and may be able to scavenge or have to fight in a skirmish. To better prepare yourself, you can customize your vehicle with better weapons and armor. It becomes a part of your party in and out of combat.

For the first time in the series, Wasteland 3 features coop, and it’s done right. Both players can join together, play separately to engage in both sides of a quest, and then collaborate to collect all the rewards. When the session ends, each player keeps their save. However, if anyone progresses and alters the world, the player who joins will see themselves and the world around them in a different way.

There’s so much to Wasteland 3, from using animal whisperer to convince a cyborg chicken in joining the party to collecting creepy dolls (similar to Fallout’s bobbleheads, but these offer party-wide bonuses) to dealing with an experiment gone awry by dealing with a roomful of clones. It’s weird, and wonderful to come across all of them, and try to decide how you’ll deal with each outrageous situation to the next. 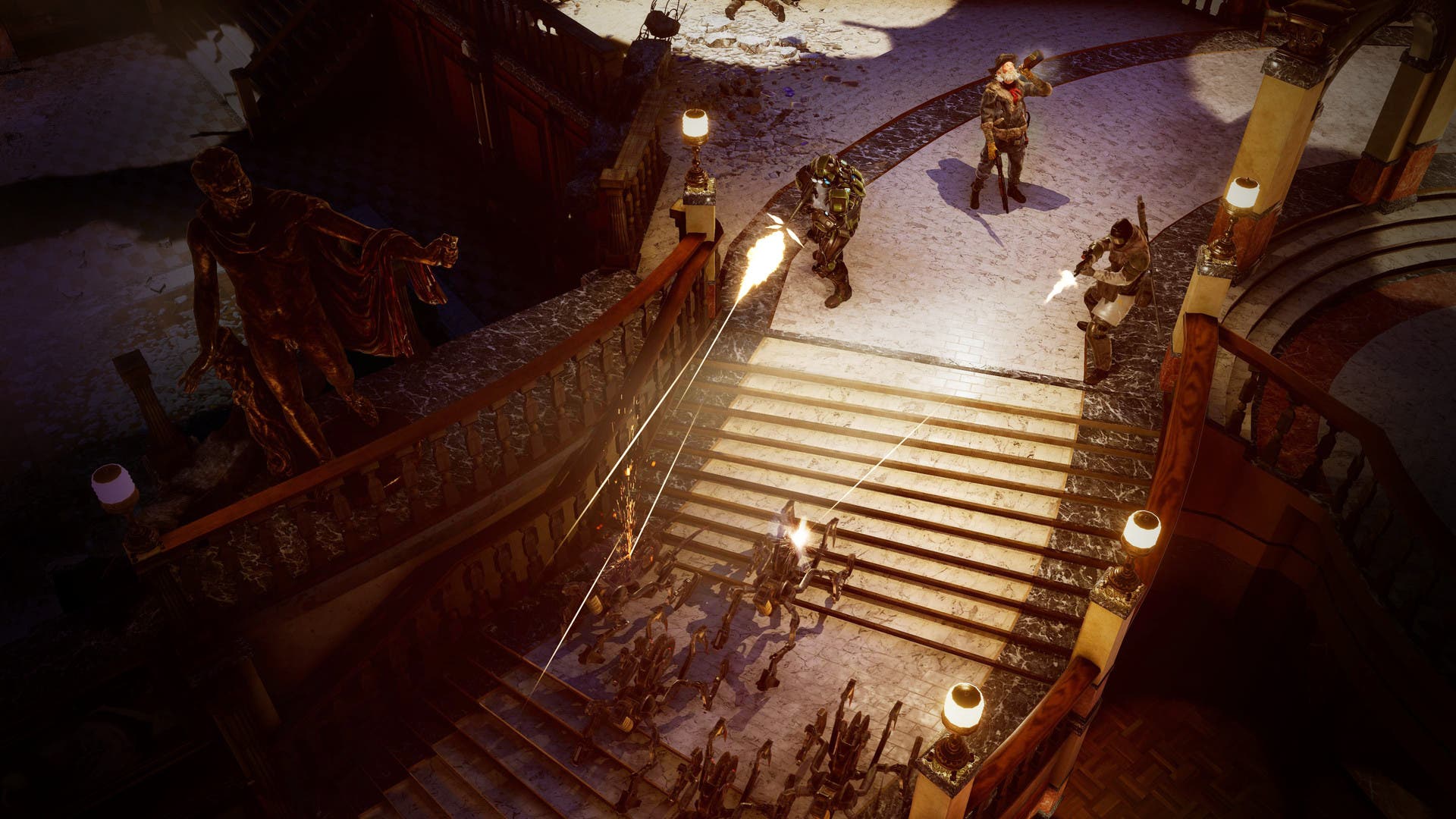 The critiques about Wastelands 2‘s looks were taken to heart, and it shows. inXile has done a lot of work to the engine, lighting, textures to make it all look prettier, and more performant. Now, as a tradeoff, you can’t zoom out as far as you used to. But there’s no live action video, and everything is rendered in-engine. Even in conversations, which with the most important NPCs will happen from the first-person perspective. There’s an overall better presentation from the visuals to the UI and UX that is really enjoyable to use at all times. 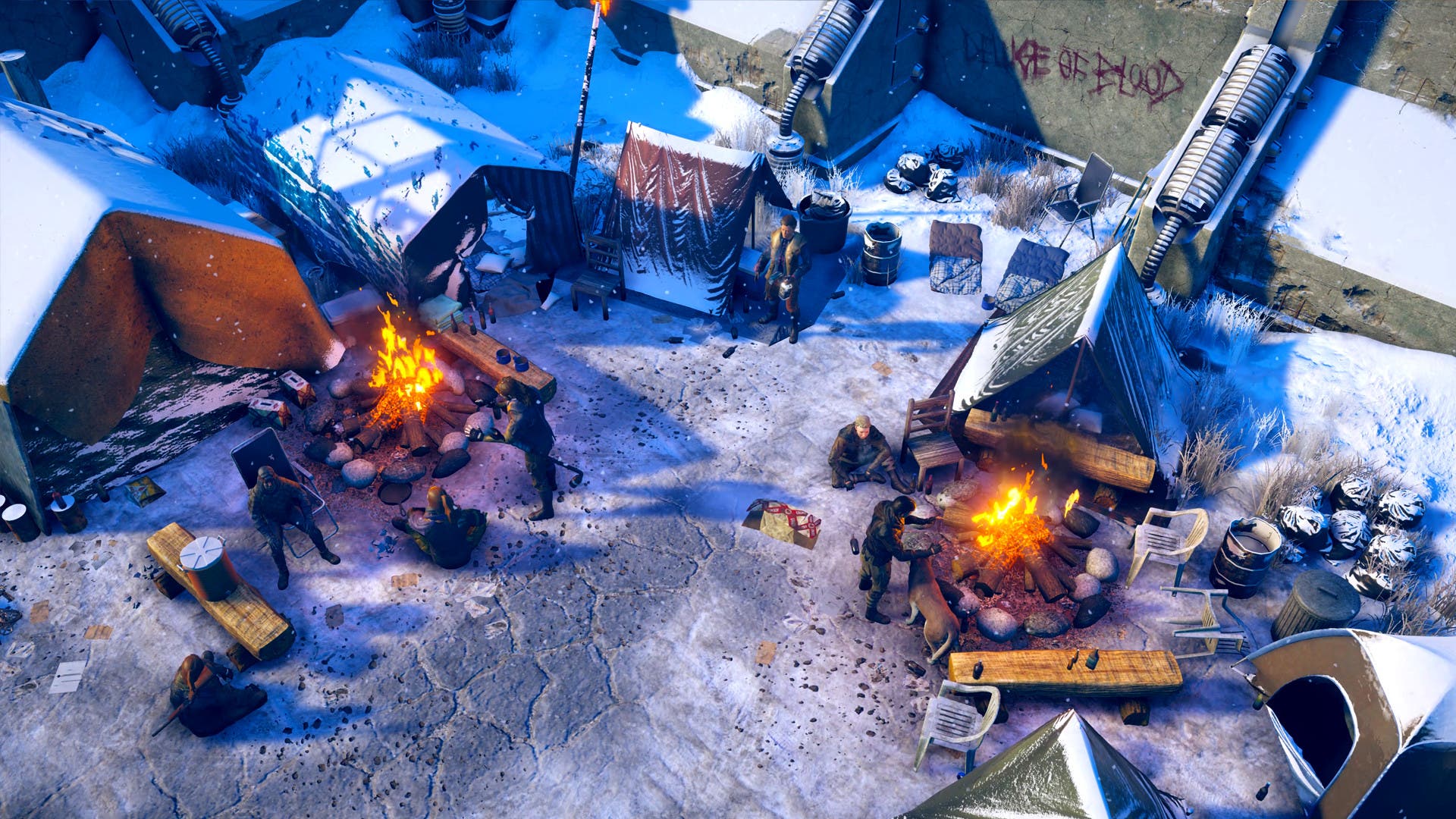 It took me a while to realize how much these interactions, whether it be the interpersonal conversation or combat encounters themselves, stuck with me. Wasteland 3 has rules, but they only exist for you to bend them. With limitless character creation combinations, branching dialogue choices that affect what quests you do or don’t experience, and multiple endings, Wasteland 3 is an expanse of content and opportunity. The change in locale does wonders, no longer relying on a tired post-apocalyptic biome. Wasteland 3 has a wonderful backdrop in Colorado’s frozen wastes, making it the perfect place to spend a nuclear winter.