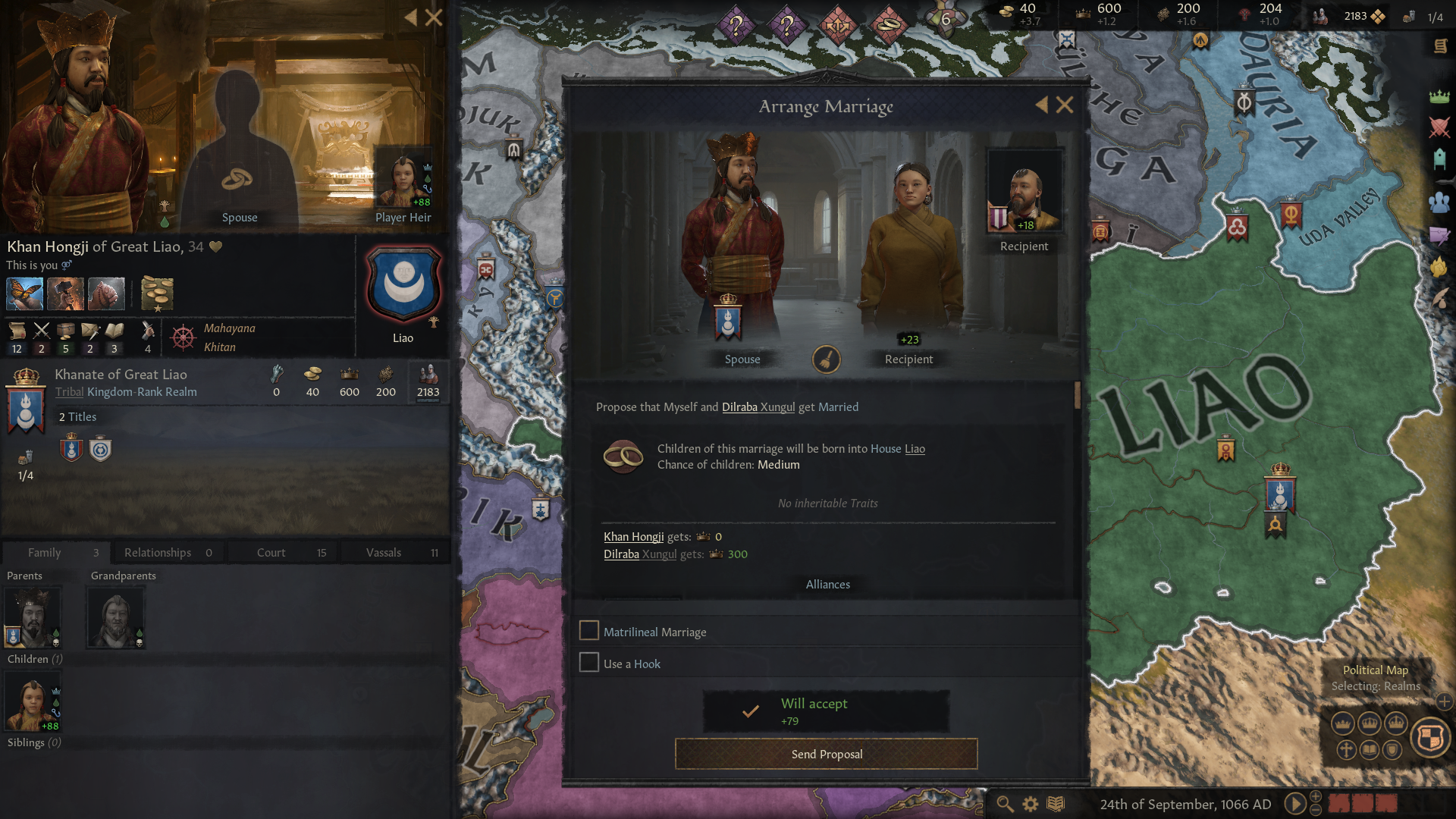 This is the sequel to Crusader Kings II, released in 2012, where it saw expansions until 2018’s Holy Fury. The game includes all DLCs that made its way into Crusader Kings II. So if you’re new to the series, know you’re getting everything that came before. But if you’re a returning player, this is a worthwhile upgrade in so many ways.

Choose between two start dates: 867AD and 1066AD. There are three chapters to each start date that offer different focuses and challenges to overcome. There are dozens of rulers to choose from, with the difficulty of playing them outlined clearly. You can even select any ruler from any country on the map across Europe, Asia, and Africa. The game just surfaces a handful of options. No matter how things go for you, the game’s ending date is 1453AD. Tutorials are bountiful in this game, and will do everything it can to teach you about it. Fear not, if there’s something you don’t know, there are tooltips to teach you more. Even the tooltips have tooltips. Everything is explained, and you’ll be well on your way to extend the reach of your family’s name, holdings, or even cultural impact. Dynasties are the name of the game, and death is inevitable, but how you prevent your death from being in vain is for you to ensure. 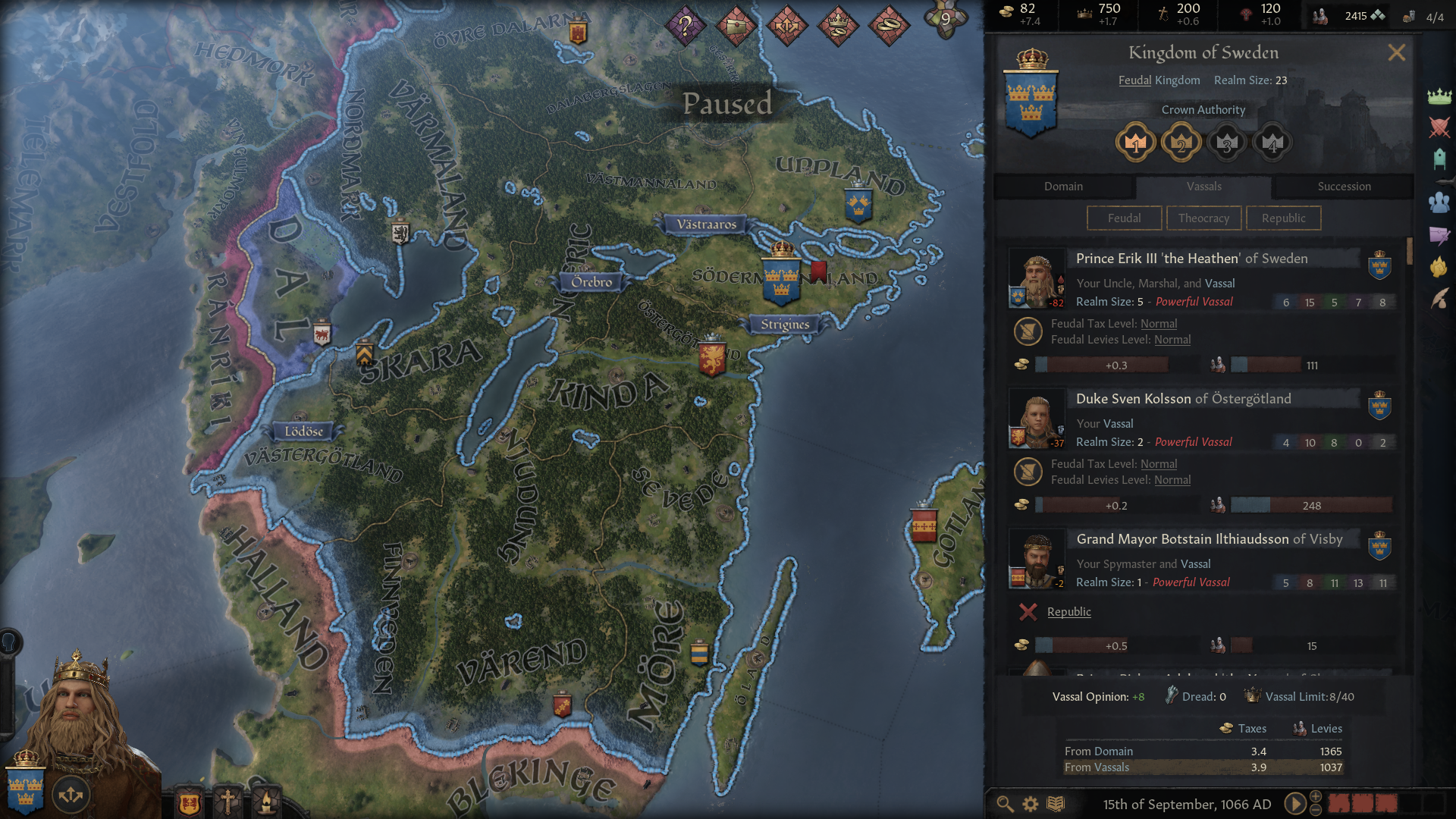 Crusader Kings III has a lot of mechanics and systems in play as work to pass on your genetics through your lineage. Some of this can be taught, where you’ll educate your offspring to impart them with the same knowledge you possess. Making them effective leaders later in their lives. You can be a tyrannical leader that develops dread across the land because you’re known to kill more often than befriend. Or you can be craft, and execute political intrigue by airing dirty laundry or by fabricating facts that aren’t able to be disputed. You can even denounce your religion for something you yourself created, but you’ll have to have a lot of piety and things in your favor for others to follow you down this new road.

You’ll need to buildup a gold stockpile for certain decisions, minor and major. You can host a massive feast, or declare a new kingdom, which’ll cost you a good sum of money, but you’ll earn so much more in other respects. To get this gold, you’ll need to conquer lands to do so. A line of strong vassals doing their part to support you and not their own endeavors is a start. Amassing a powerful army through your martial prowess will be your back up to initiating casus belli. Wars are won through smaller battles, capturing important figures, and dismantling strong holdings. 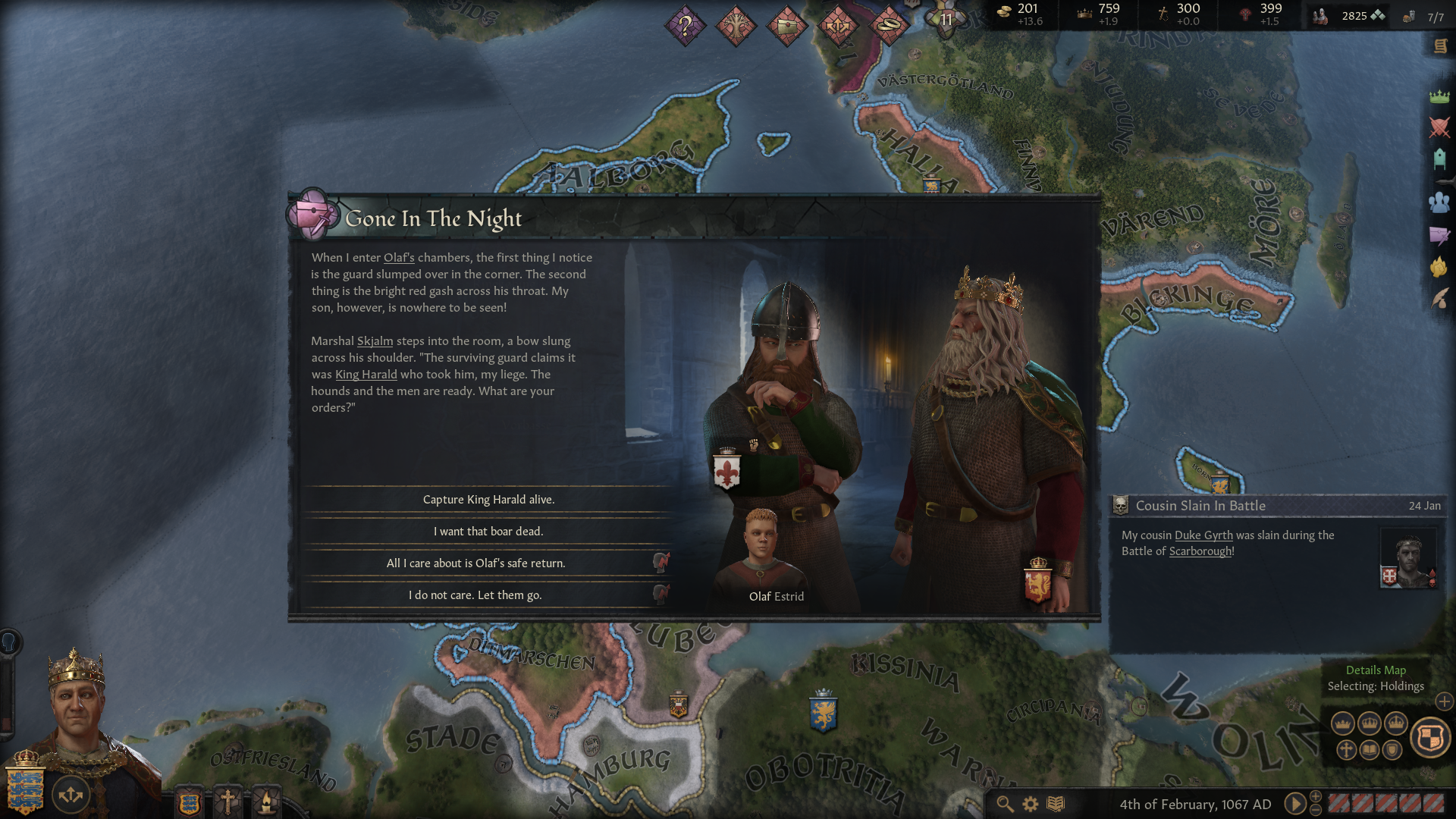 I think what makes Crusader Kings III so interesting, is the wildly varying stories to tell. And they can have nothing to do with your overarching goals for expanding your kingdom.

Early on with my first character, I was well into my 40s now and my son’s wife had a lower opinion of me than I would’ve liked. So I sent her a Gift in hopes it would increase her favor of me. Well, she liked it too much and kept eyeing me at a dinner that me and my entire family had attended. We began some small talk off to the side, and then we snuck off together, and wound up in bed. Come to find out that she became pregnant. This is all happening while I’m claiming the last piece of Ireland in my name to forge the Kingdom of Ireland. Then, my own wife began to spy on me, and found out what had happened. My wife soon hated me, my son hated me as well, and I was looked at differently by my vassals, but my son’s wife didn’t leave my side. In one fell swoop my son had been murdered by his wife and my lover, then she herself mysteriously died shortly after. It wasn’t long before I died of old age and my grandson became the heir, skipping an entire generation all due to one night of infidelity.

There’s so much genius, and inherent storytelling here that makes it all so intriguing. From marriages that are accidentally consanguineous, uncles and nephews going to war over land, or the incessant plots against your life, you’ll never get bored. 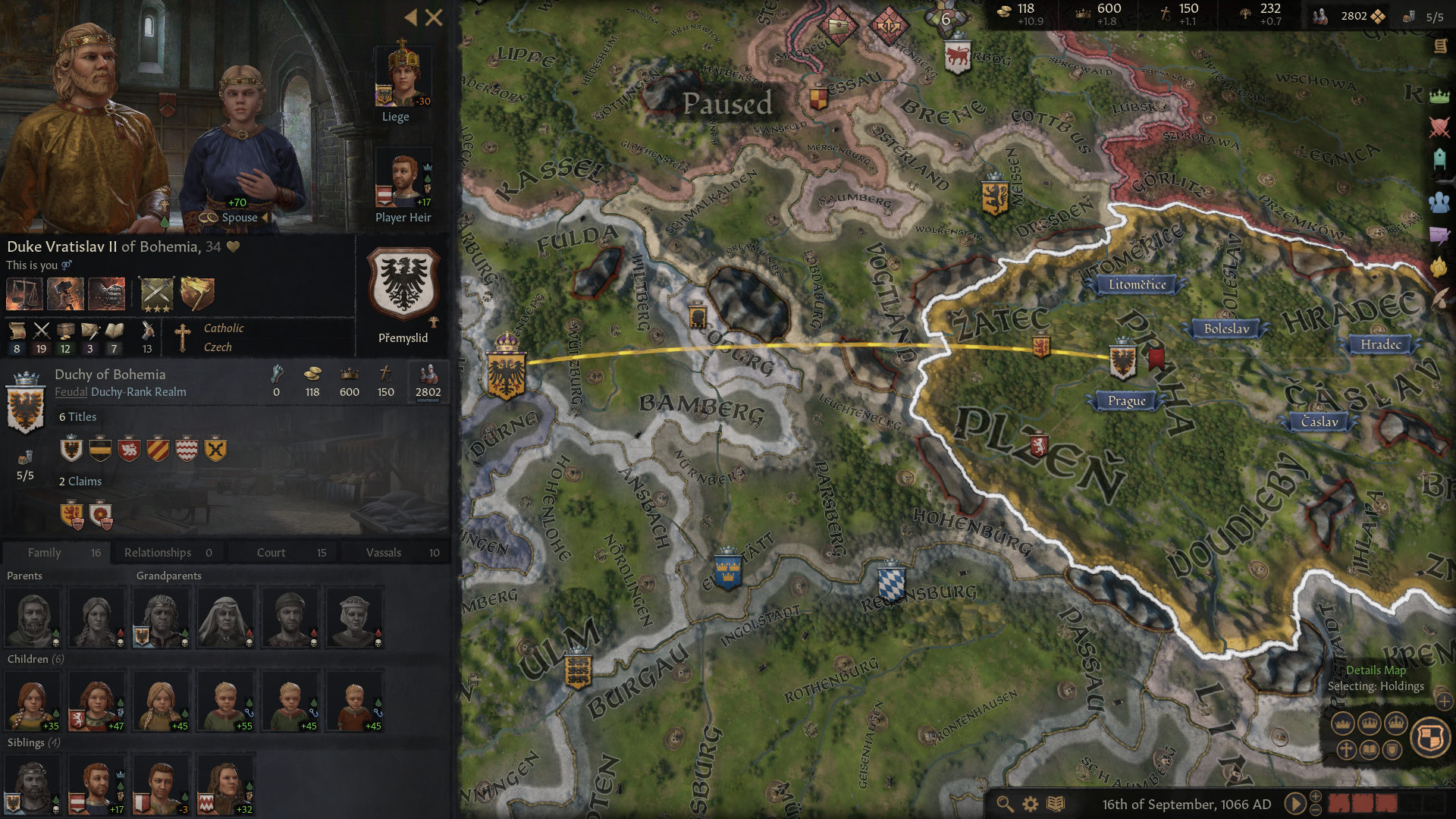 With Crusader Kings III, you must be concerned with the stress of your character. It has three stages, and can be increased by certain actions, and down with others. I was able to essentially do a “rage room” with one of my sisters who erased nearly all of the stress I had been accruing in its first stage. This saved me from having a mental break so early on into my career and life. Unlike Crusader Kings II, you don’t have to manage ships. You can send as many troops onto a ship and they’ll automatically embark, but at a cost to gold. Another change is that your army’s numbers and the prediction of whether they are inferior or not is only part of the equation. There are still dice rolls at play, and other variables about your knights that factor into successes and perhaps failures. The differences all seem like improvements, and more accurately reflect battles and wars at-large.

The narrative web that gets woven throughout your time playing the game is wholly unique, making it a very personal experience. Over time, you’ll either force or naturally become intimately aware of secrets. These secrets lead to hooks, and hooks can be large or small, allowing you to protect any losses in forcing someone to do something they wouldn’t normally. It’s bribery of knowledge, and it’s wonderful to enact with precision. 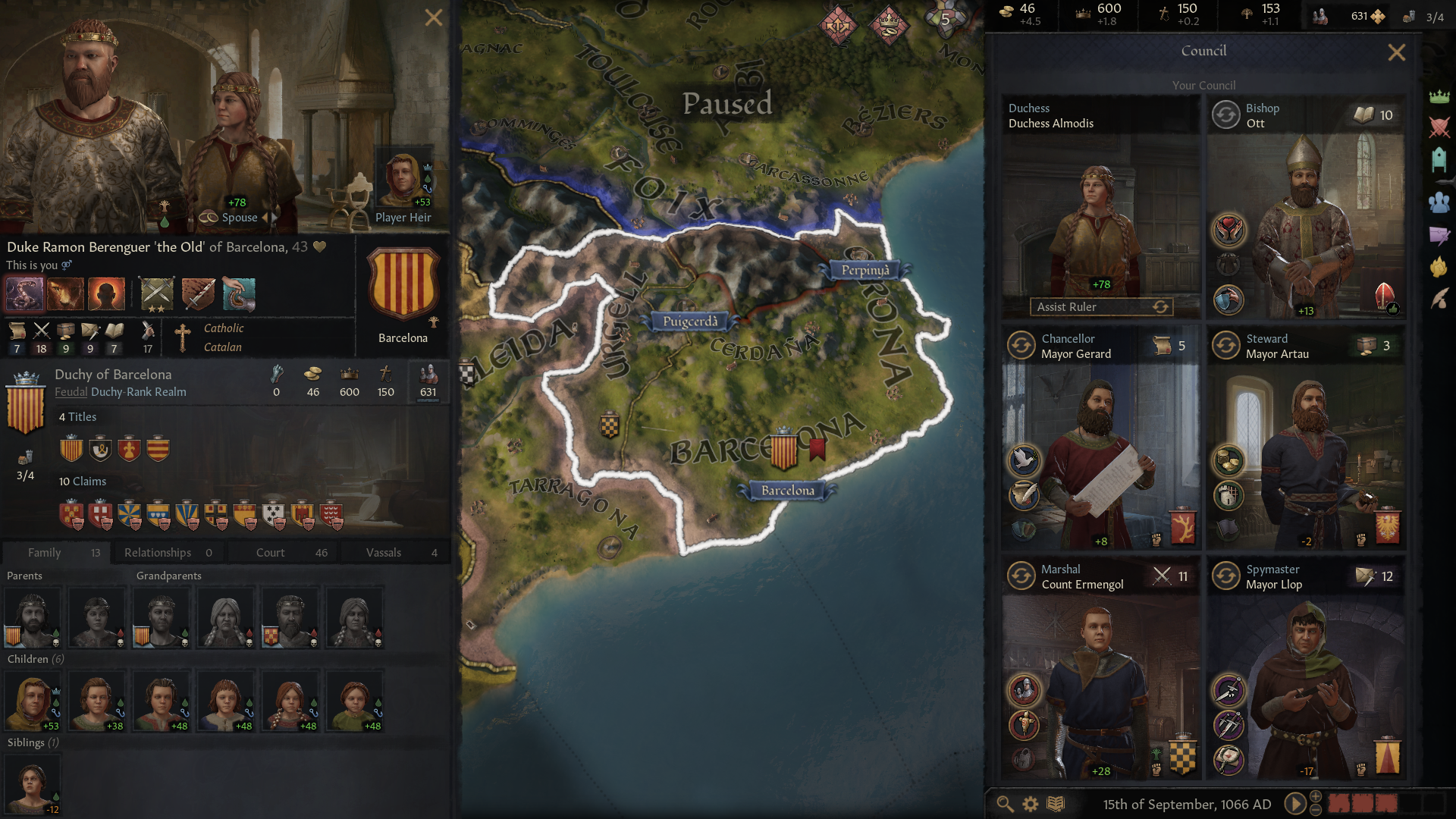 I found that arranging marriages led to solving a lot of problems quickly and easily, and also lead to forming alliances with countries that extended far beyond my reach. I could then call upon these allies to war, at a cost of prestige. But it strengthens the relationships on both sides. This is where your advisors come in, they will send you notifications of the most important situations that must be dealt with, from arranging marriages to declaring war, and everything in-between. If relations aren’t improving, you can scheme to increase their opinion of you. There’s dice rolls on each step of the scheme to succeed, and can take months for it to finally pay off, but is rewarding when it does.

There are four distinct eras within the game: tribal, early medieval, high medieval, late medieval. What you do with your culture is divided into these eras, and will only be available at certain times. There are even differences in how you can take over land. Tribes, like Vikings are one of a few who have the ability to raid. There are many things you can do to change or alter course, but will require a lot of effort to sway those around you towards something new. As you lean into a lifestyle of diplomacy, martial, stewardship, intrigue, and learning. Experienced earned will allow you to invest points into perks to give you advantages into your chosen lifestyle. 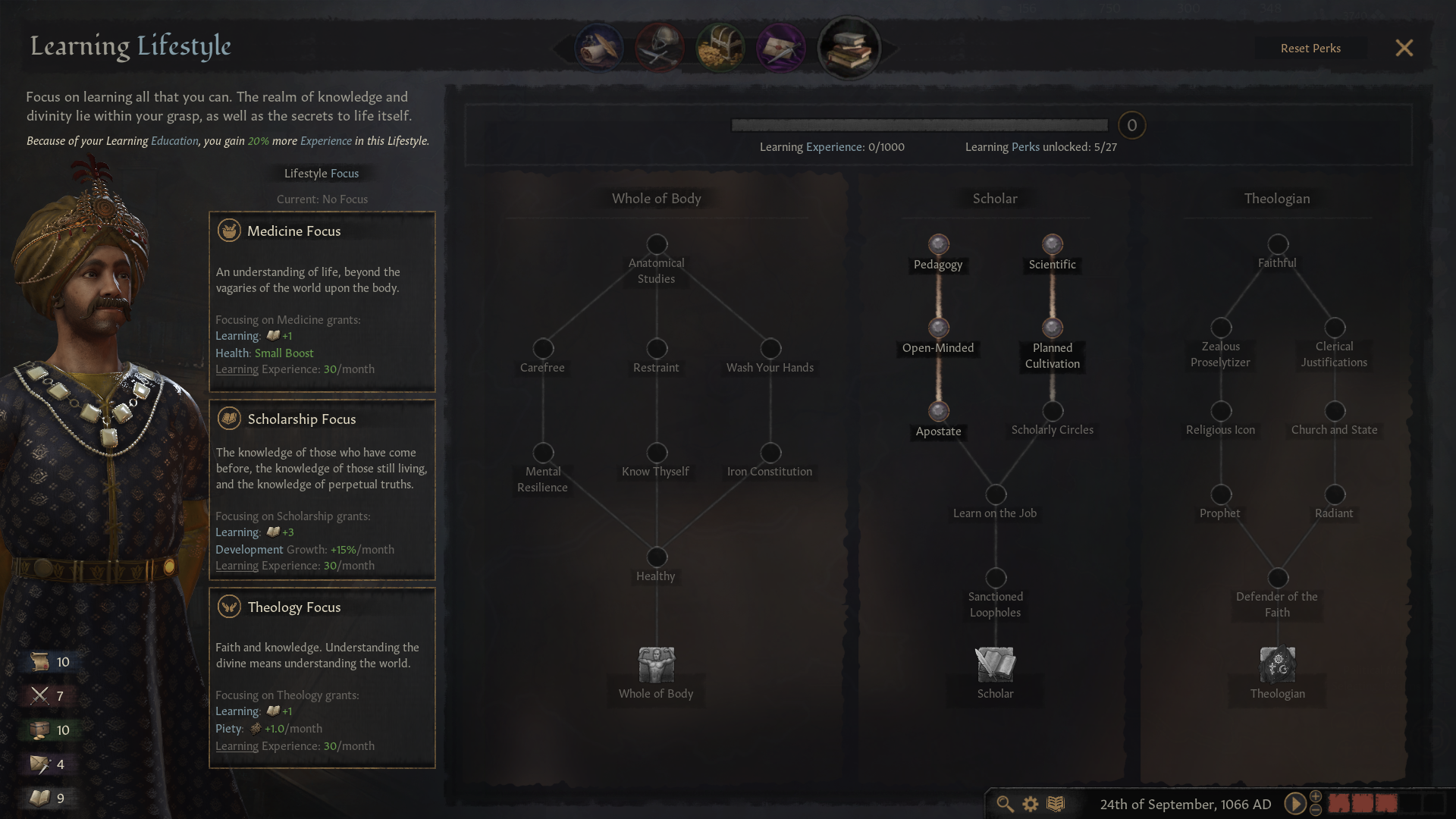 The music is different this time around. It’s dynamic, reactive, and ambient. It increases tempo when at war, and is solemn and slow when not. I found several pieces to be an earworm thanks to the violins and other string-based instruments. It knows when to kick things up based on events, and it’s great indicator for when to pay attention. It’s a really memorable score, even if you don’t realize it at the time.

If the visuals of Crusader Kings II could be likened to a hand-drawn map, then Crusader King III‘s visuals are like oil paintings. This is expressed clearly in the loading screens, but it’s so much more beautiful to look at and experience. The iconography is detailed and distinguished, the text can be resized and is always clear thanks to the font choice, and the 3D portraits of every character have animated movements to demonstrate their personality. 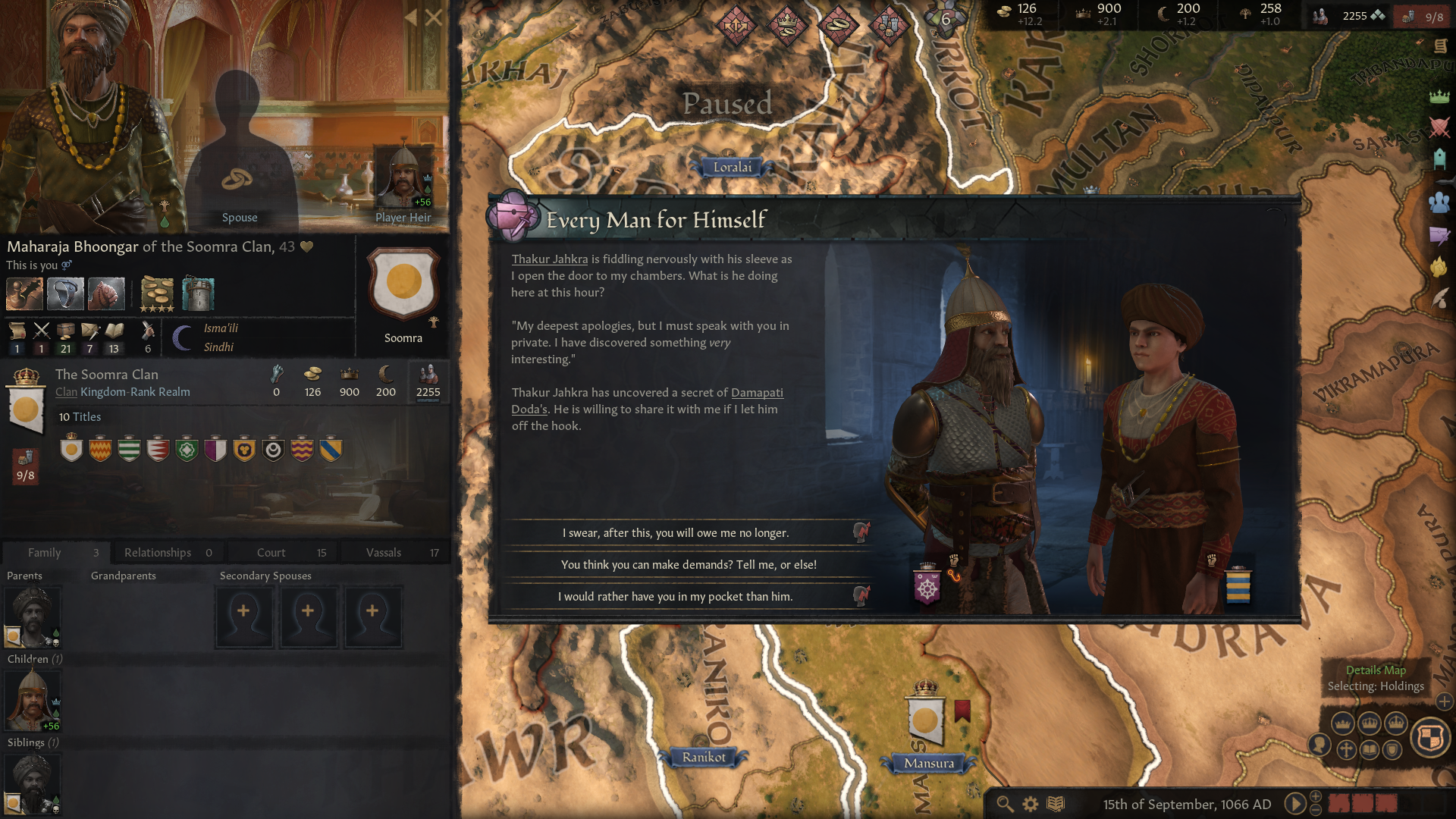 Crusader Kings III is all about the dynasty you’ve built, and the legacy you leave behind for a future of fame, fortune, and family in an ever-unfolding drama that’s brought unto you, or what you create for yourself. There’s a chasm-wide cast of characters to play as from real royal families from hundreds of countries, many of which you’ll want to see them through. Whether a new or returning player, hours will pass like minutes, and you’ll realize the game has a hook on you that you won’t want to remove. This is grand strategy at its finest, and Crusader Kings III is an immensely replayable, unscripted narrative masterpiece.