If you put aside the mismanagement, the shuttering of a studio, and the economic impact to an entire state that surrounded the development, release, and post-release of Kingdoms of Amalur: Reckoning, there was a great open-world fantasy RPG to thoroughly enjoy. Kingdoms of Amalur: Re-Reckoning is essentially the same game with improved graphics, some added accessibility, and under-the-hood improvements that warrant the purchase. Though it really only edges out the original, ever so slightly. Kingdoms of Amalur: Re-Reckoning is a great re-introduction into the world and gameplay that’s worth experiencing again, and a series I’d like to see continue.

Kingdoms of Amalur: Reckoning had some big names attached to the creation of it, most notably comic book artist Todd McFarlane, Elder Scrolls IV lead designer Ken Rolston, and fantasy novelist R.A. Salvatore. It’s a shame then that what results is really just generic fantasy. It does however, have enough unique things going on to establish its own identity and hooks to keep you playing throughout. Playing Kingdoms of Amalur: Re-Reckoning all these years later doesn’t change anything about this, but I think it can be appreciated more for what it is, than what it isn’t.

So, what’s new with this remaster? Aside from the graphics, work’s been done in terms of the way difficulty and loot is handled. First, a new ‘Very Hard’ difficulty has been added. And then areas now recalculate the level of the enemies each time you enter it, allowing you to still be powerful but not hilariously and overwhelmingly so. Also, the container level lock has been removed, meaning that items generate upon opening chests are now based on your level. And for enemies slain, the loot generation is improved to weight closer to your level and the type of destiny you’ve chosen, or the way you’re playing. This is all a positive, but there are many things being done under-the-hood that many may not notice or be aware of. For things that are apparent, is the added camera height, camera distance, and field of view options. You can even scale the UI to be smaller, or hidden. This actually improves the game’s overall experience, removing the “cramped” feelings I often had playing the original. 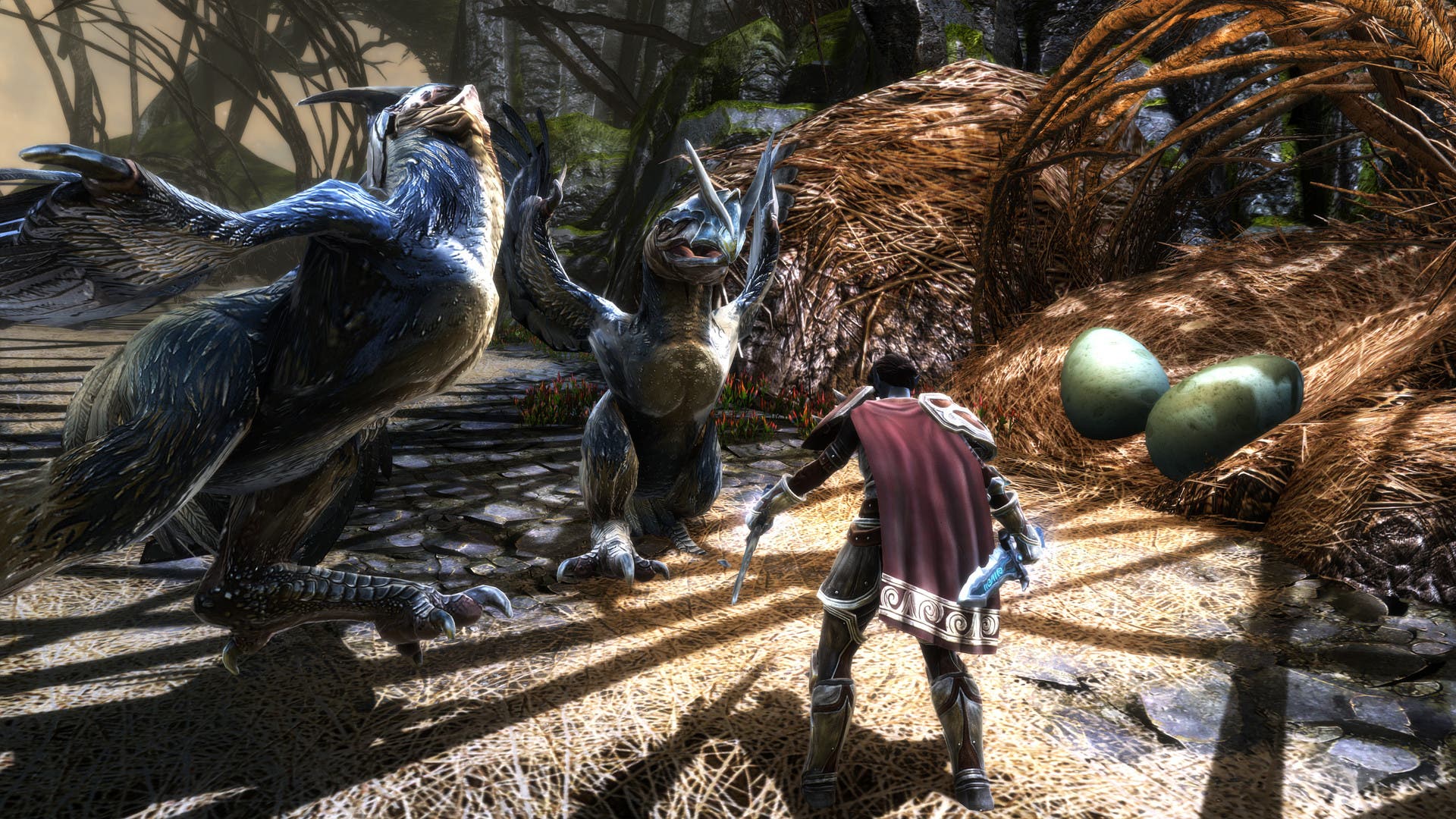 The game’s opening sequence starts off almost like nothing else. You see, you’re dead, or were. You awaken thanks to a device known as the Well of Souls being its first successful experiment. As you get up from atop the pile of corpses awaiting incineration, you meet some gnomes who are aghast that the device actually worked. Having been resurrected, you’ve defied Fate itself, and have pissed off the game’s antagonists, the Tuatha. After escaping, you’re set loose to pretty much do as you desire. What follows is a 30-hour campaign with up to 100 hours of total questing.

As the recently resurrected, you’re able to choose your destiny. This is the game’s way of presenting its classless system. You don’t pick a class, but you do spec into one. You can be a jack-of-all-trades, a master of one, or a master of none. Split between Might, Finesse, and Sorcery skill tress, you’re able to build out a character any way you see fit. If you want to be a spell-slinging thief, or a greatsword dusting mage, you can. And at any time, you can visit a Fateweaver to pay them to reset your abilities and try something new. While it can be costly, the level of experimentation feels freeing enough that you don’t ever feel locked in to your choices. 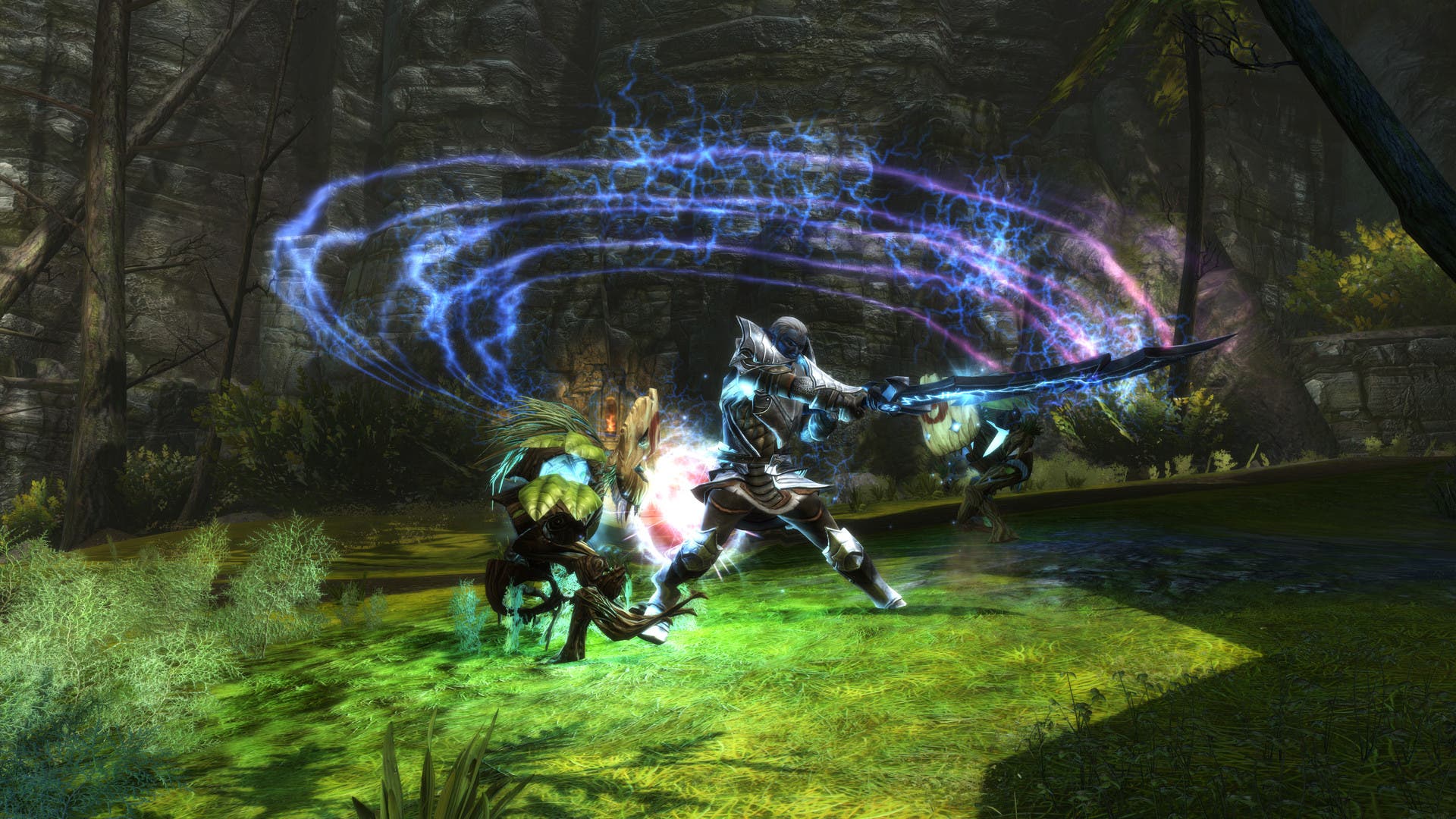 Given the flexibility of classes, there are a hundreds of weapons from ranged to melee, each with their own modifiers and gem slots. I tended to rely on melee as a fighter-type class, where I use a dagger to get close and stun-lock fast-moving foes, and then a longsword for heavy hits once I closed the distance. Aside from your health and mana pools, you have another meter that fills up from getting kills. When full, you pull both triggers and activate Fateshift, an ability that takes a few seconds to charge up, but will slow down time to a crawl so that you can execute massive attacks onto the enemies surrounding you. When you’re done you can press a button to view a fantastic cutscene of different variations where you wipe out an enemy in tremendous fashion. It’s a bit of a button mash, but you can earn additional XP. Armor is another part of the game, where you’ll be able to mix n match different parts for individual benefits, or put it all together for a set bonus.

You don’t learn professions or trades per se, but you do emulate them. After a few hours into the game, you’ll have the ability to do crafting, alchemy, and gem slotting. For each of your creations, you can even name your own items. This adds a personal touch to the game that you don’t really get to do elsewhere. There are plants in the world to harvest for ingredients, you can break down old weapons into their components, and gather items from looting corpses and containers. It’s worth pointing out that this is a completely optional part of Kingdoms of Amalur, and these systems you never have to interact with if you don’t want to. 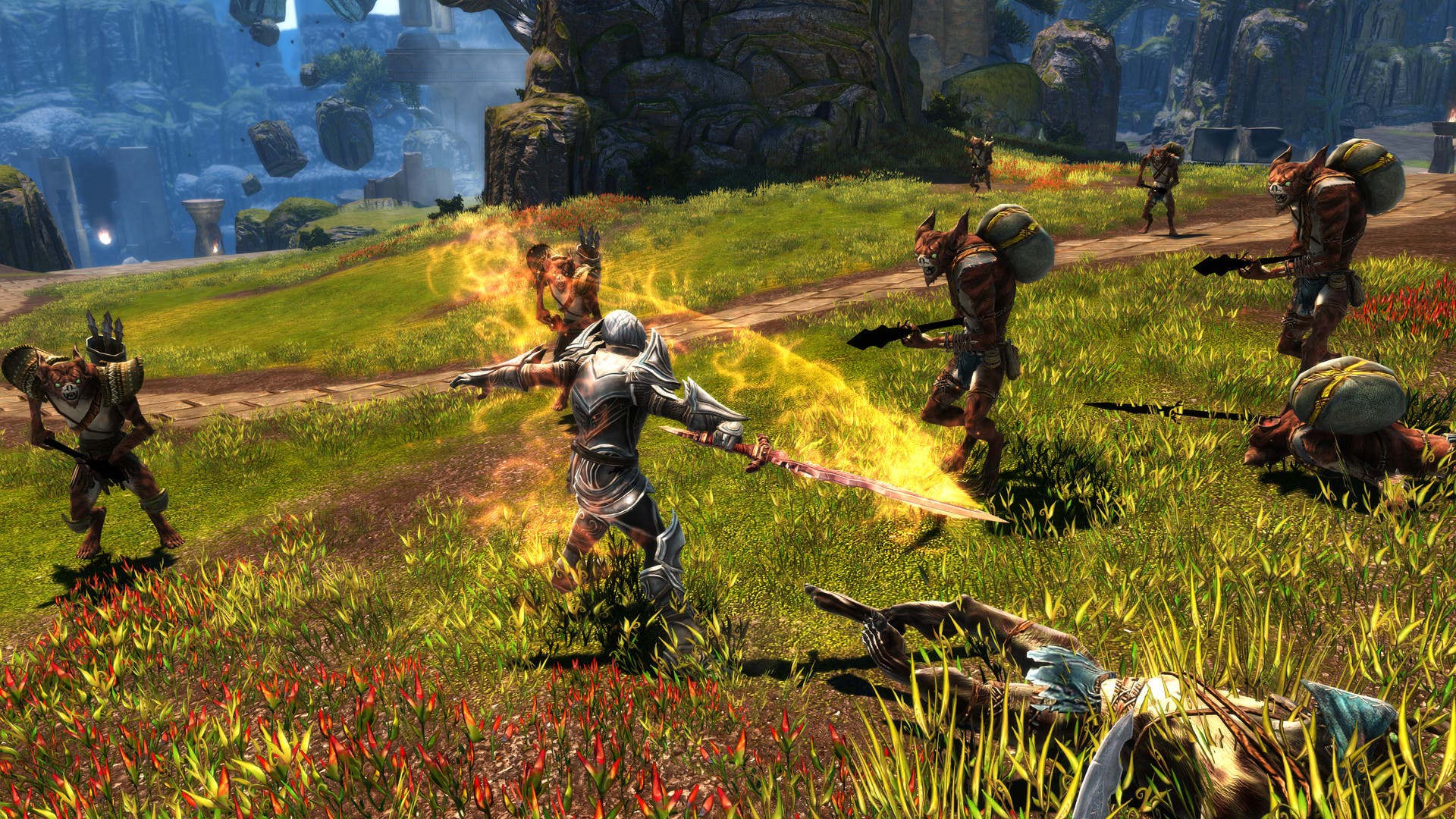 A lot of Reckoning is heading to the yellow circle waypoint, talk to the NPC, head to the next waypoint, fight a bunch of enemies, then go back to the original NPC. This is certainly a common element in the game, and can be a bit mindless. Thankfully the combat is good, and the world is visually stimulating and interesting to explore, so even the mundane quests aren’t bothersome. There are over 200 quests in this game. And as it stands, I have dozens(!) of side quests just waiting for me to complete them. They range from spies spying on one another to lost artifacts to kill orders. Things can certainly spiral and range from serious to humorous. This is a game that gives you an exhausting amount of things to do, and you won’t be running out anytime soon.

The game’s map is split up into five big regions. With massive cities, dungeons, deserts, plains, forests, and more to visit, exists many landscapes to explore. Kingdoms of Amalur: Re-Reckoning includes the two expansions: Teeth of Naros and Legend of Dead Kel, which these two quests almost immediately pop-up, but I’d almost certainly wait. It’s clear there’s a lot of turmoil in these lands, and it’s cool to see how the side quests weave into the primary quests, ultimately feeling like a connected world. I’ve always described this game’s look and feel to that something of World of Warcraft Offline, and given the nature of its early development being an MMO, it certainly shines through in many facets of its systems.

I had to install Kingdoms of Amalur: Reckoning alongside Kingdoms of Amalur: Re-Reckoning just to be sure I was seing the differences. They seem, mild compared to other releases, even from publisher THQ Nordic. The visuals have been touched up, mainly the textures to allow for up to 4K resolutions. As a result, Re-Reckoning is four times the size. The original with all DLC weighed in at around 10GB, this remaster with all of the work and DLC is at 40GB. It’s not necessarily huge, but it’s a massive difference. The game runs really well, though. It has a supersampling feature that when disabled I get around 140fps. At 0.25 increments up to 2x supersampling, runs at arond 80fps or so. I prefer to have supersampling maxed as it produces cleaner lines and just a better presentation, but certainly a hit to performance. It’s clear that the game looks better, but using a DX11 renderer, I expected the game to look better than this. So it seems more like a reissue than a remaster. 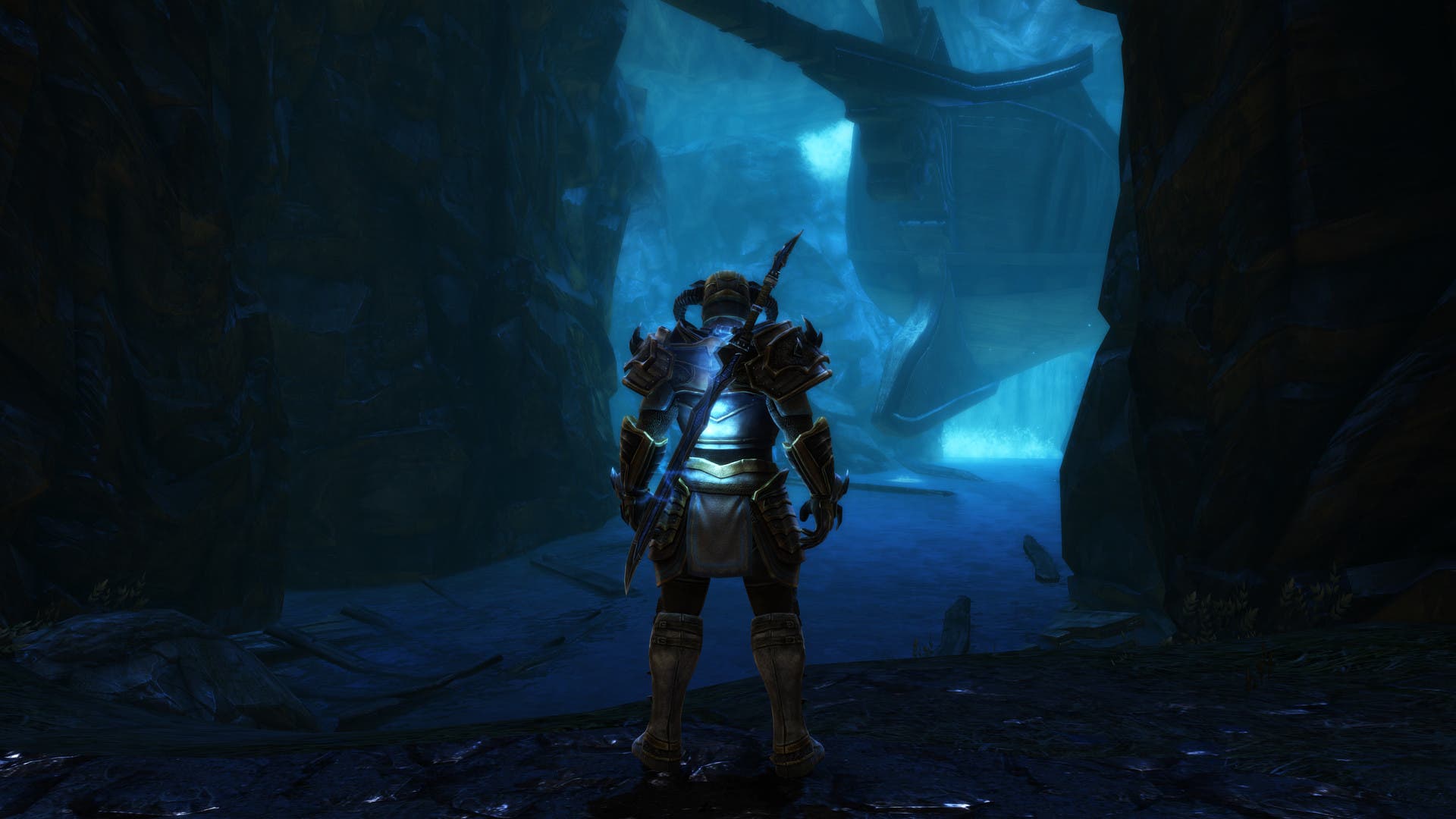 Kingdoms of Amalur: Re-Reckoning is a weird release. It doesn’t have any substantial improvements compared to the original, and maybe on PC there’s going to be less of difference than for consoles. So if you have the original on PC, there’s basically little reason to upgrade except to play the upcoming Fatesworn expansion next year. That said, if you’ve never experienced this game, now’s a great time. Kingdoms of Amalur: Re-Reckoning really holds up as a great RPG filled to the brim with content, and its build-your-own class system remains a highlight, backed with some really fun combat. Don’t miss out on one of 2012’s best games now.