Rare is the opportunity for players in Western culture to get exposure to games steeped in mythology and iconography from other parts of the worlds. Many of the games we play from other parts of the world have either been heavily influenced by the juggernaut of American pop culture, or are filtered through the lens of interpretation, losing subtlety and authenticity in the process. When something like Raji: An Ancient Epic comes along, a bona fide adventure set in ancient Indian culture and its rich, storied mythologies, it is an instant head-turner. 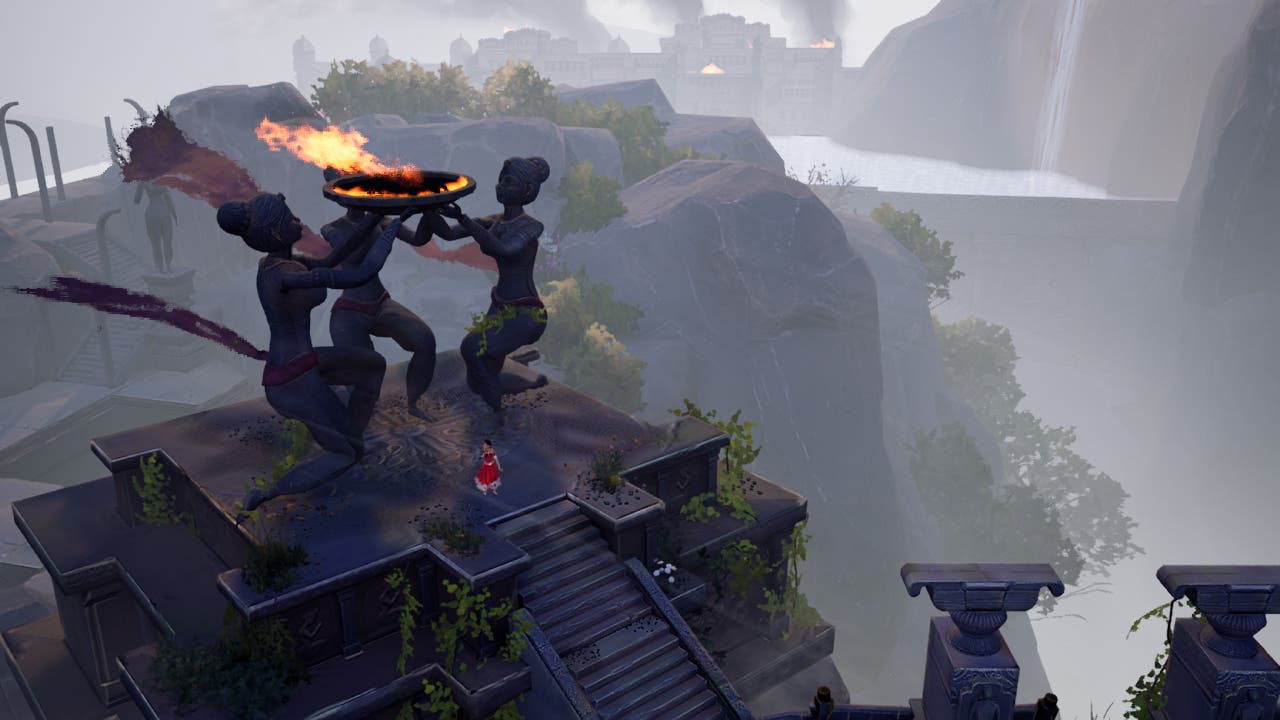 Raji opens in a striking fashion, setting the stage for what’s in store with a cutscene inspired by traditional Indian illustration that gives way to a lush, vibrant landscape full of mysticism and beautiful artwork throughout every environment. Raji is the story of two siblings, the eponymous Raji and her younger brother Golu, whose lives are turned suddenly upside down when Golu is abducted by the very demons he is performing stories about at the market. The fate of Golu and the rest of the world hang in the balance as Raji barely escapes with her life. She awakens to find she has been imbued with the power of the gods and chosen as the one to save humanity, if she can rise to the occasion.

It is apparent from the jump that the primary focus of Raji is to bring the Indian tradition of epic storytelling to the medium of video games, as there is so much care and detail in the game’s environments. From underground temples to ruined fortresses to mighty castles, every location is lovingly designed and rendered in ways that highlight the artistry in their construction, and each place you visit feels grandiose, steeped in legend, and tingling with mystical energy. Many of the areas feature fantastic artwork smartly integrated into the environment, either as storytelling devices or game play mechanics, but never in a way that feels awkward or forced. 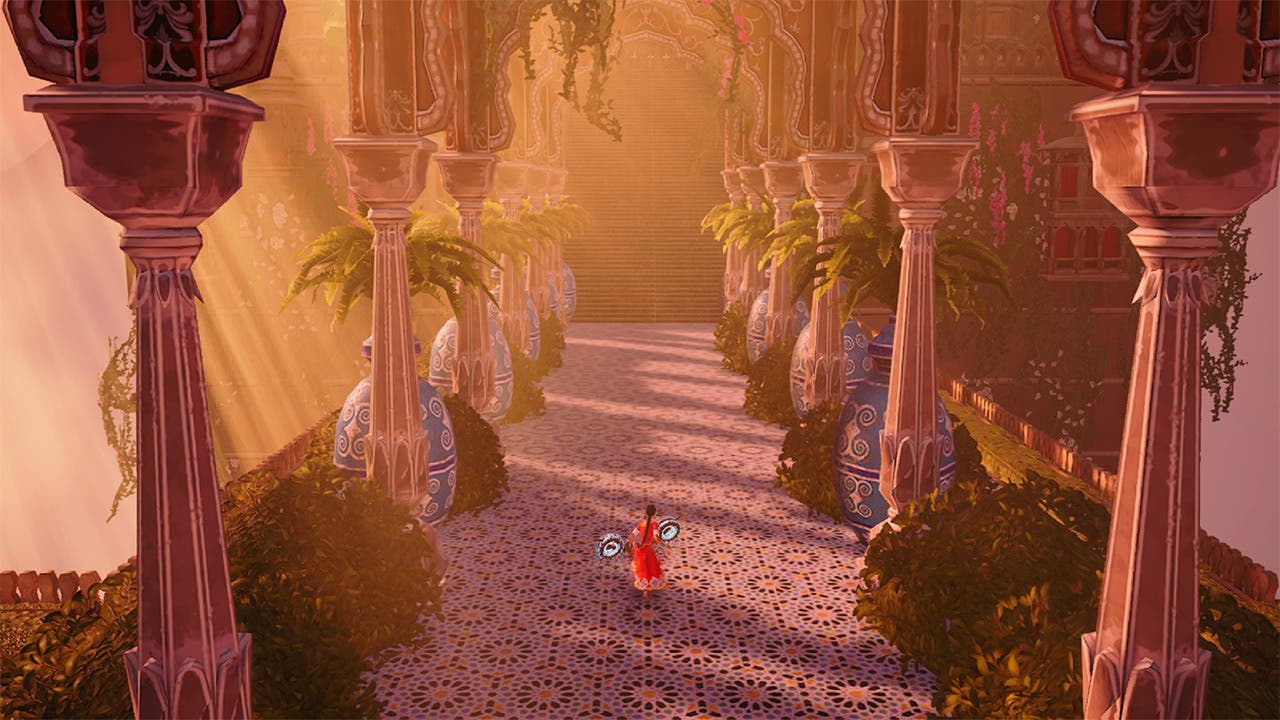 Further gravitas is lent to the experience by the incredibly high stakes of the story, the clear disadvantage Raji appears to have against her foes at the outset, and the game being told in the style of an epic adventure as it unfolds. Much of the game’s exposition is provided by the gods themselves conversing over Raji’s fitness for heroism and remarking on her progress as she goes, further stressing that her success is so important that she has the attention (and intervention) of ancient deities. Your actions feel important, urgent even, and you can feel the weight of the burden that has been placed on Raji’s shoulders.

All of this is to say that translating the concept of an ancient epic story to a game can absolutely work on a lot of levels, and the visual and environmental work at play here do a lot of heavy lifting. The stage is set extremely well for a playable epic, and the story is worthy of the cause. Unfortunately, things don’t come together quite so elegantly when it comes to actually playing the game in terms of traversing the world and engaging in combat. Controlling Raji feels just a bit stiff a lot of the time, or as though there’s a noticeable (but seemingly deliberate) delay from input to actions. At times, especially in combat, it feels that priority is being given to completing character animations over allowing the player to change their mind in the midst of performing an attack. While the idea of needing to follow through or finish an attack after its started is certainly more realistic, it can either serve to challenge players or frustrate them depending on the implementation. 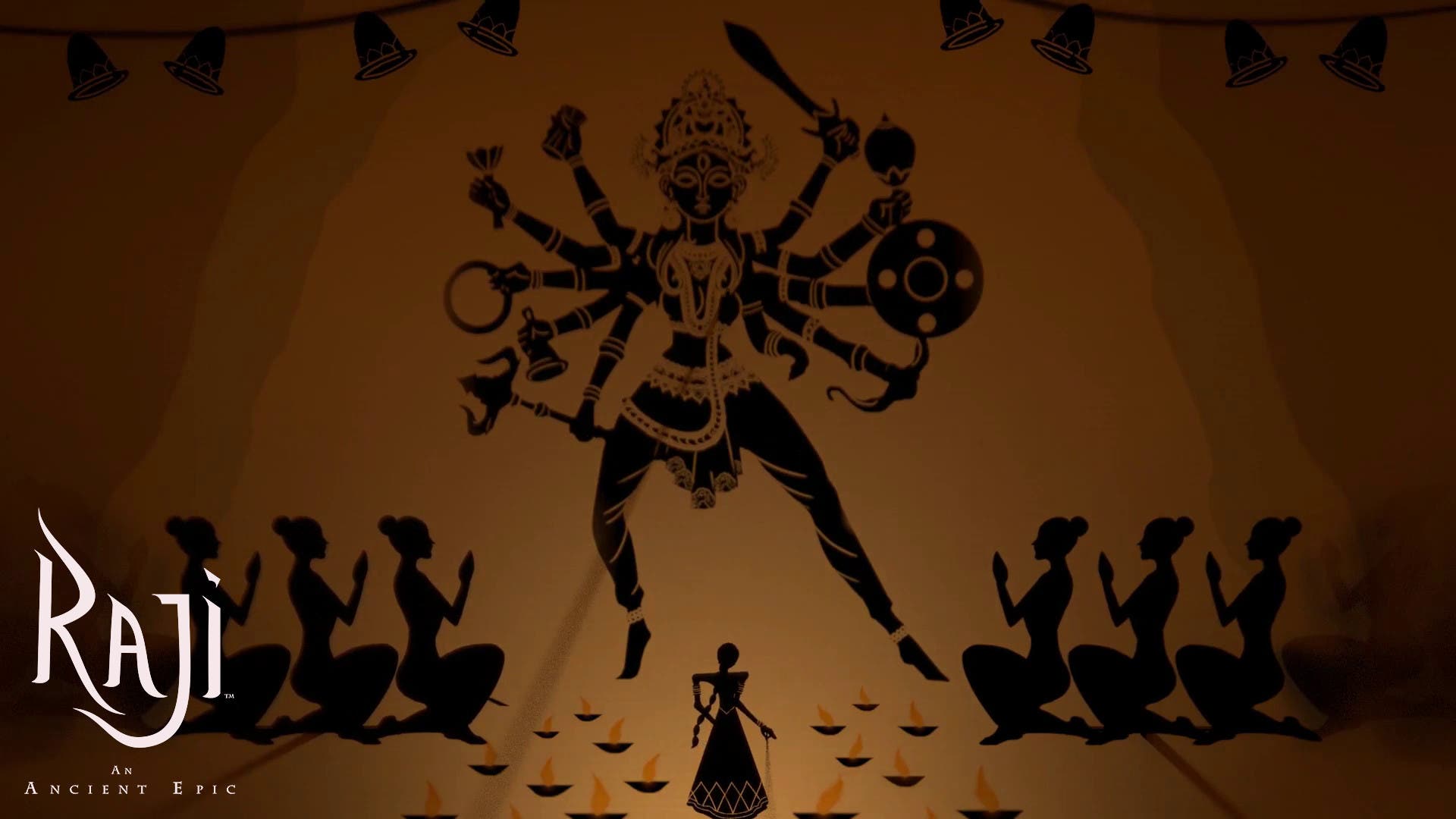 In practice, I have found the decisions around character movement in Raji to fall more on the side of frustrating, as both in and out of combat I feel there’s a lack of precision in my movements and a frustrating tendency to get punished for incorrectly reacting to enemy actions that demand a greater degree of accuracy in control than I feel Raji is capable of most of the time. The game alternates between platforming sequences reminiscent of what you might find in Prince of Persia, Assassin’s Creed, or even Uncharted; scaling pillars and rock formations, using a sword to slow your fall down a long banner, etc. These segments often feel good and fun, though there were too many instances of that lack of precision I mentioned causing me to miss jumps I felt I should have made. As traversal inevitably gives way to combat, these control issues are made more starkly apparent.

The combat in Raji is pretty well designed in concept, and the range of abilities available to you is impressive and fun to interact with. Apart from just attacking and dodging, actions can be combined in a number of ways to vary your strategy and produce more visually exciting fights, where your move set becomes the extra weight needed to tip the scales in your favor. You can combine dodges with attacks to get altered move sets and attack from a distance; you can grab a pillar and twirl around it to stun an enemy before attacking; you can run up walls, pillars, and other objects in the world to perform a backflip off of them and initiate special attacks. 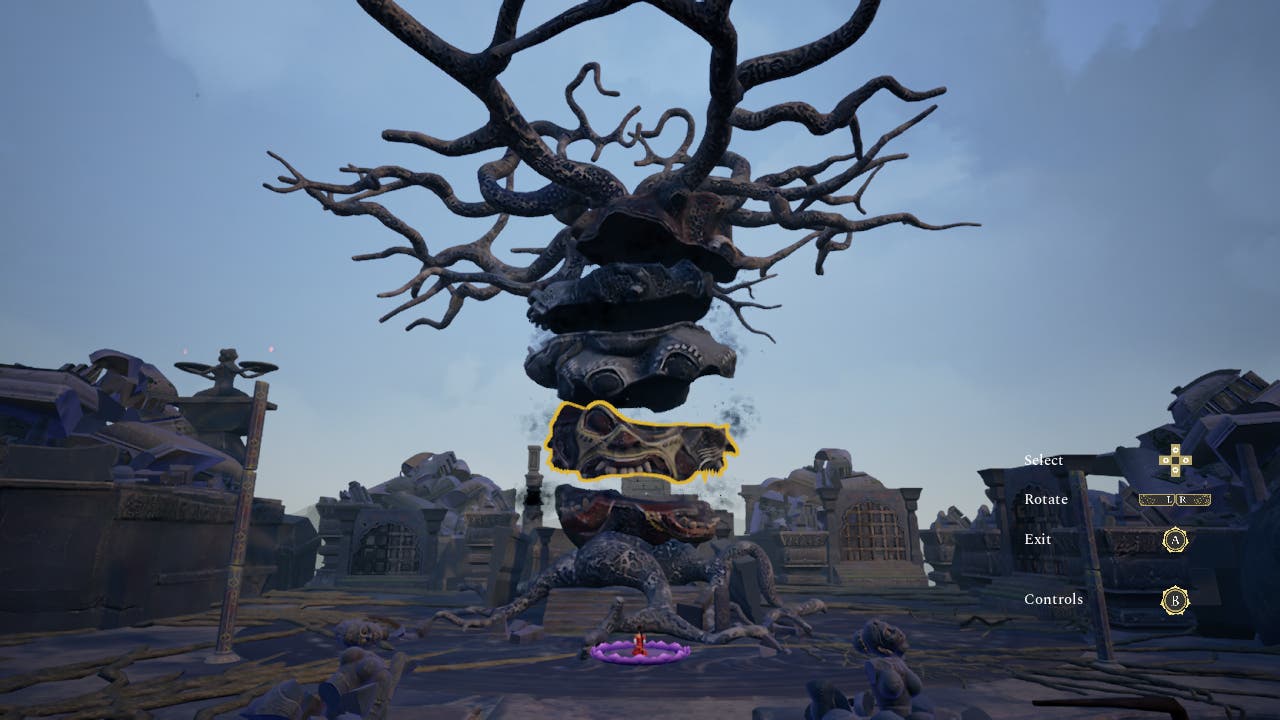 Combat can therefore be very fluid and acrobatic when things are working well, but often I felt the potential of this system was difficult for me to capitalize on. Most of the time, it just felt that I either couldn’t move quickly enough to pull off what I wanted, or I couldn’t aim my flighted attacks well enough to land them consistently. There was one fight in particular that I couldn’t complete normally due to an inability to dodge an enemy’s attacks quickly and accurately enough, and I had to figure out a strategy to cheese my way through it in order to progress.

It is also worth mentioning that while this game does look stunning at times, it still suffers from the same problems as most Unreal Engine games do on Switch, which is that it has a tendency to look muddy in many instances, and is prone to massive frame drops in some sequences. To its credit, Raji has far less of these problems than most Unreal games I’ve played on Switch and seems to have optimized for many of these issues, but it still carries the distinctive look of the engine and its trademark problems with it. In many cases it’s easy to dismiss as the problems aren’t severe, but in situations where a clearly important visual moment or setpiece suffers from the frame rate slowing to a crawl, it can definitely distract from the otherwise presentation. 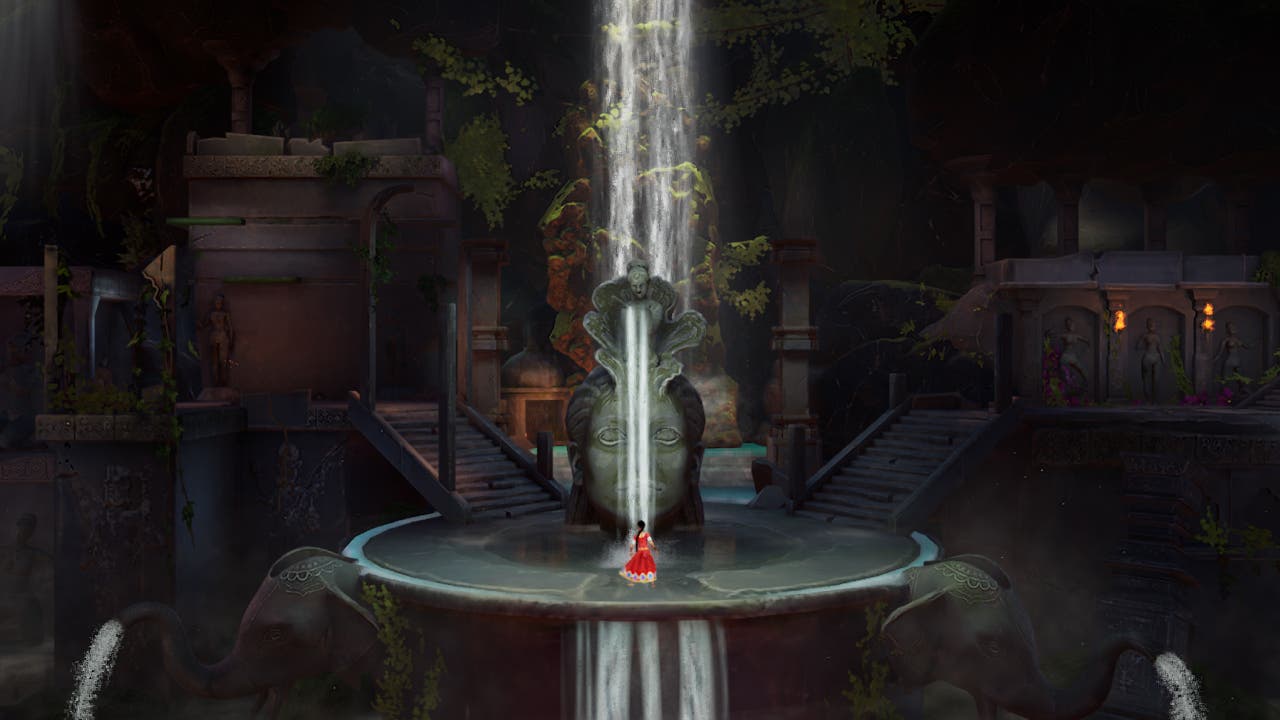 More of a rough stone than a dazzling gem, Raji is glimmering with potential in lots of important ways and has some truly wonderful moments, but leaves something to be desired in terms of polish and consistency, especially where player movement is concerned. Overall this is a solid debut effort from a new developers and I suspect that the Steam version might be the one to play when it comes out later this year. Still, even with its flaws, Raji: An Ancient Epic offers a unique experience and a great story that are worth seeing, if you can get past the rough edges.