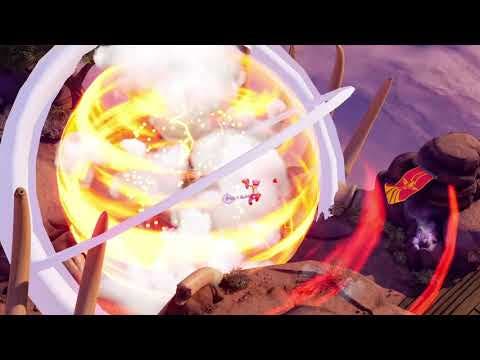 EA and Final Strike Games announced the launch of the Runaway Megadon Event, another special limited-time event in Rocket Arena that offers players a chance to hop into new maps, modes, playlists and more. Starting today through September 22, tour competitors can blast off to Boone’s home region of The Wilds in search of a magnificent missing Megadon.

Players can explore the new map, Kayo Kanyon, an abandoned whistle stop in the Wilds featuring some of the ricketiest tracks in Crater, where they’ll come to find a rocket-shaped water tower, a tar pit filled with Megadon Bones and ancient Rockets, mining tunnels and more as they head off on the hunt for Boomer the Megadon.

In addition, tour competitors can journey to new event playlists and play new game modes: Megamuzzle and Splat, or test their solo skills in Duel. Those who log into the event on consecutive days will also be treated to a number of free, exclusive rewards from the Rocket Rail Line, including the Megadon Adventure, Boone, Rugged Rocks Totem Pattern, Rocket Rail Caboose Totem Symbol and the Fossilized Megablast VFX Trail.

Rocket Arena (Standard Edition) on Origin/PC will also be available for free for all Amazon Prime members starting September 10 until October 10. Prime members can claim the game for free by visiting https://gaming.amazon.com.

You can find more details on the Runaway Megadon Event in the blog post here.