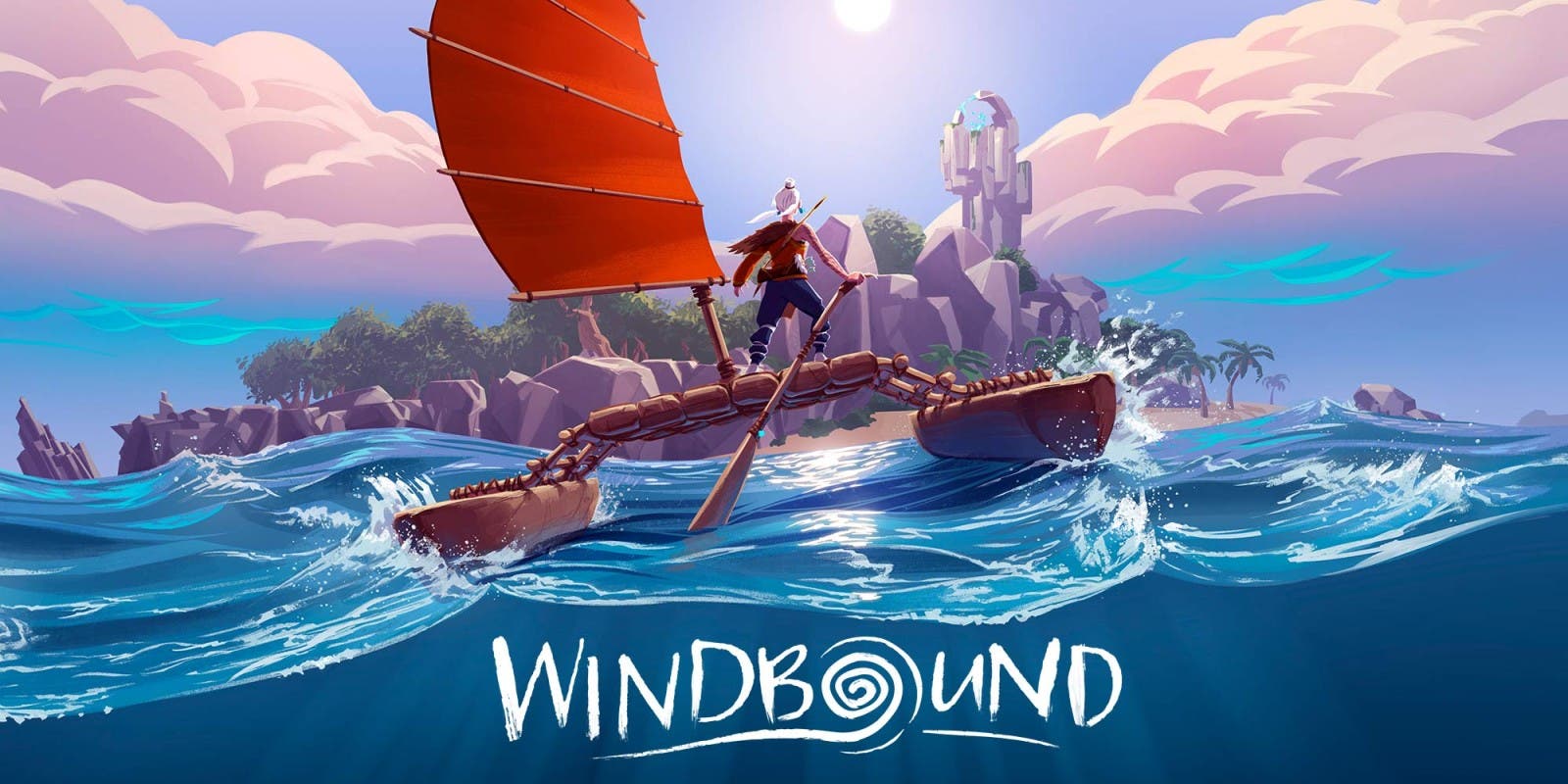 Windbound comes at you strong, with a striking sense of visual style that lands somewhere between Sea of Thieves and The Legend of Zelda: The Windwaker, and it seemingly deliberately dabbles with similar visual themes. Its rich, vibrant world is presented with striking colors and beautiful, fluid animation, all of which breathe extraordinary life into the lush environments and highly animated local fauna. It’s a gorgeous game to look at, and it helps set a tone early for itself as a game about discovery and wonder. The story begins with your character at sea in the middle of a violent tempest, captaining one of many small boats struggling to fight their way through the storm. Waves swell, and suddenly a massive sea creature the size of a small island breaches the surface, threatening to destroy everything around it. A gigantic tentacle raises from the depths and crashes down upon you. You awake to find yourself standing on the surface of a calm sea in the still of night, with a giant, swirling portal of light before you. What choice do you have but to step through and see what fate awaits you? You awake again, this time on a very small island in the middle of an expansive ocean. It’s daytime, the sea is calm, and you have nothing to your name except the clothes on your back and the knife in your belt. 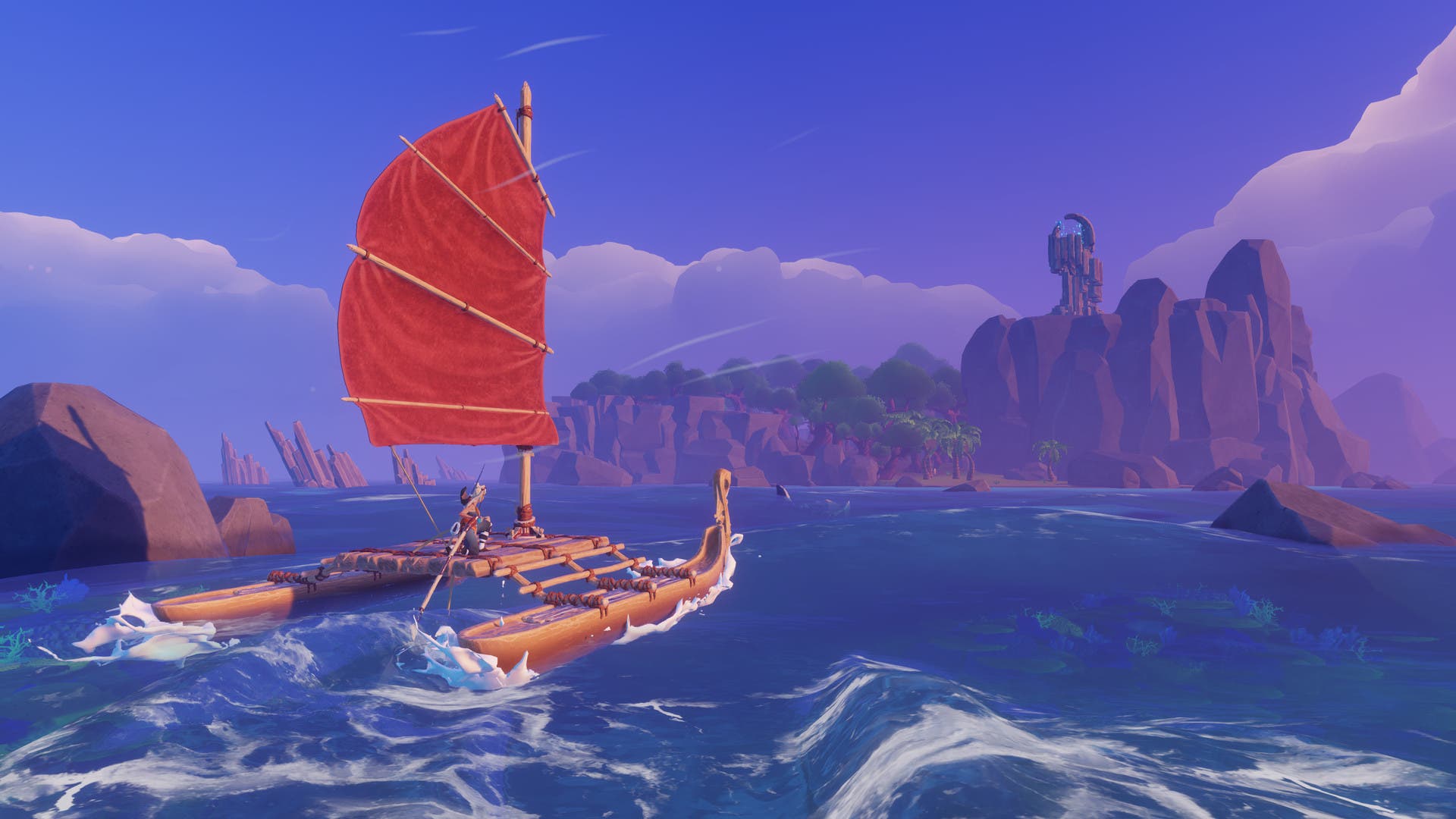 The massive proliferation of the survival genre has inevitably led to a lot of experimentation with the format, and its popularity has reached a saturation point at which survival elements are blended into other games with the same ease that RPG elements find their way into just about ever other kind of game imaginable. While hardcore survival simulators like Rust or DayZ or ARK: Survival Evolved might have provided much of the basis for the genre, developers are now starting to experiment more with what survival elements look like when put in the context of more approachable types of game play. Enter Windbound, a survival-focused Action RPG with a proper story and an admirable goal of weaving the survival elements of the game in with the storytelling and world building directly. This is a potentially tall order and it certainly adds greater purpose than the typical “survival for the case of survival” approach, but does it actually work when put to practice?

At the outset, you’re mostly just learning the fundamentals of how Windbound‘s survival mechanics work. If you’ve ever played any survival game, then the staples you’re used to are all here. There’s a hunger mechanic, which is represented by the depletion of your maximum stamina, so hunting or foraging for food (and cooking it) are important elements. You’ll gather raw materials and craft tools like axes, shovels, and hammers, which allow you to gather more specialized materials. As you gather and build more things, you intuit new crafting recipes, and you quickly begin to understand how all of these things feed into one another. What Windbound does well here is that it avoids going too deep into crafting trees too early, and it deliberately restricts your inventory space to keep you focused on gathering and making only what you really need to survive in the moment. It even points this out to you as it teaches you the basics, guiding you to spend less time planning too far ahead and more time being in the moment and addressing whatever needs are immediately at hand. 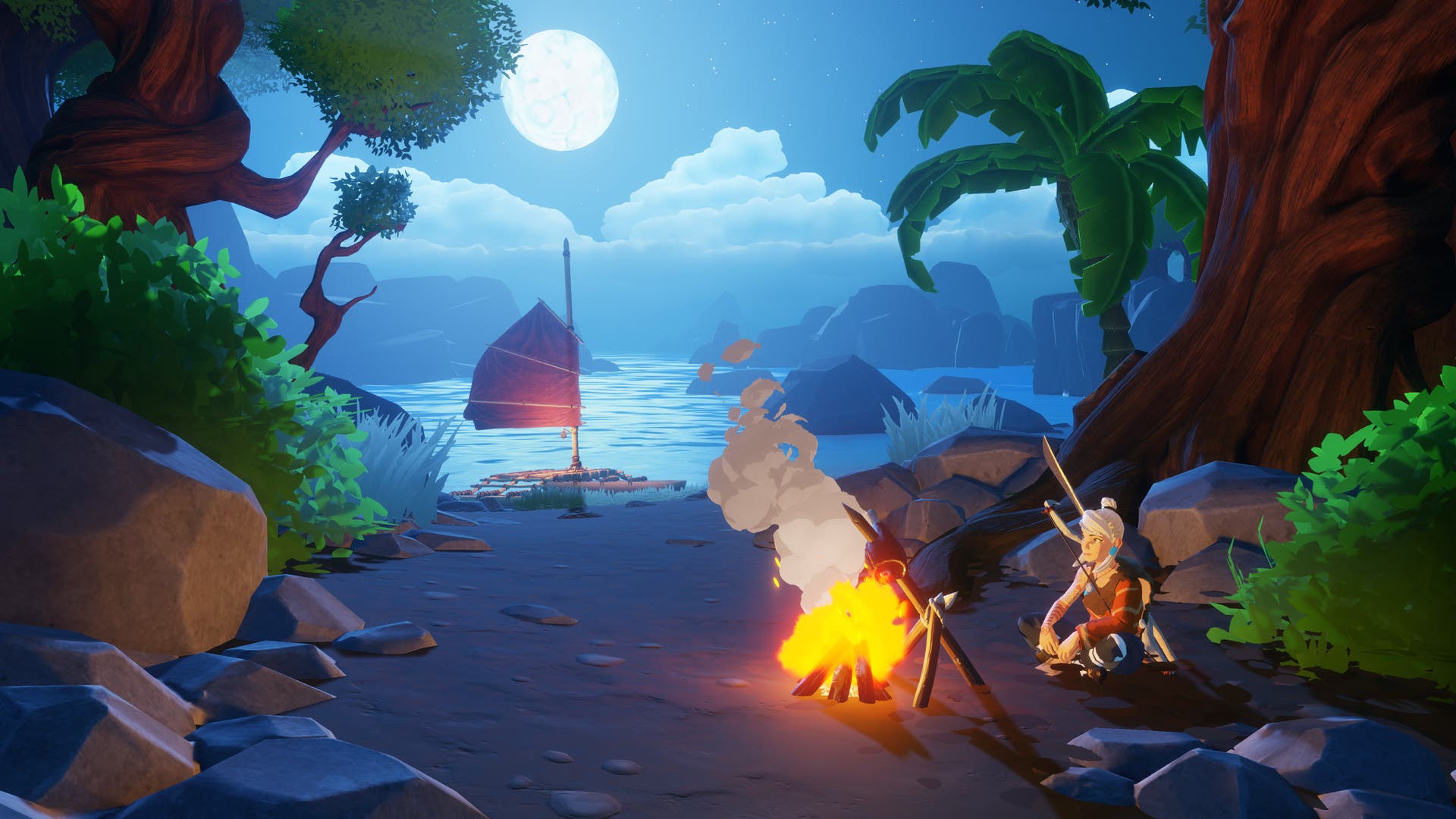 I’m also a big fan of a survival game that encourages you to be mobile, and instead of investing time and energy into building a permanent base you’ll devote your efforts toward building and maintaining your boat, which is also crucial to your ability to continue your exploration and your journey through the story. You’ll build your first grass boat almost right away, and using the Oar of the Ancients that you discover after swimming to the second island, you’ll be able to row your way around from isle to isle, gathering materials, keeping yourself fed, and visiting shrines to open the gates to the next major area. You’ll keep building your boat up as you go (fairly slowly at first), and the first couple of chapters are really more about getting you familiar with the push and pull of taking to the sea to navigate and heading to land to gather and keep yourself alive as you push toward completing each chapter.

Boat building ends up playing a bigger and bigger role as you go, and while it never quite reaches the same level of complexity of building a base in other survival games, you are able to craft some fairly elaborate seafaring vessels comprised of multiple rafts, hulls, and sails that will put your initial grass canoe to shame. As the size of your boat increases, so too does your available space for storage and utility, allowing you to eke out slightly increasing levels of independence from the shore. However, materials are somewhat limited and you have to make careful choices about what to use them on and what you want your focus to be. Do you want to spend your time and materials forging better weapons to allow you to hunt animals for food and rare bones? Or do you want to focus purely on harvesting plant-based food and building the capabilities of your trusty boat? As it happens, using your boat in Windbound usually feels pretty great, and as you learn to master using the wind to push you along, you’ll really enjoy the sensation of shoving off from land, hoisting your sail, and gliding across the water to your next destination, which is fairly important as you’ll spend a fair amount of time on your boat whether it’s your primary focus or not, and it becomes a pretty important part of the game outside of the typical exploration segments for reasons I won’t mention here. 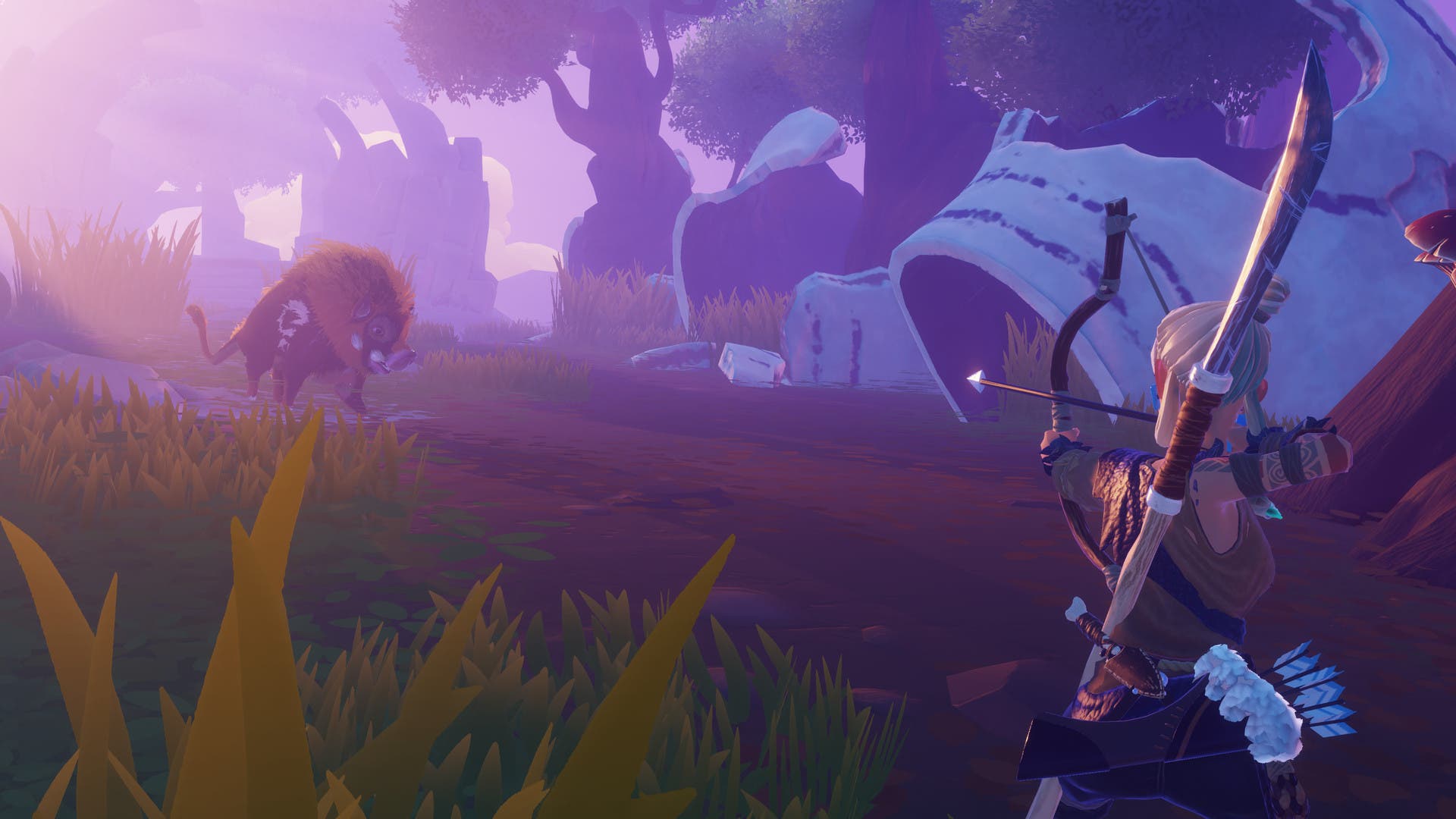 In most ways, playing Windbound feels pretty good. Character movement is responsive and fluid while exploring the world, though the timing of attacks and dodges in combat can feel a little off for reasons I can’t put my finger on. Most resources are collected quickly and with little fanfare, so that you’re not slowed down overmuch by having to cut lots of grass or bamboo and can focus on continuing to move. The hunger and stamina systems are fairly manageable, even with the rate at which food degrades after being harvested and/or cooked, and while I never found the hunger mechanic to be bothersome, I did often feel that the stamina and energy recovery did end up slowing my progress to the point where I noticed it as a key point of friction. There are collectible items you can find which will boost your stats permanently, but they are sparse and don’t individually add a huge benefit.

When I first started playing, my initial reaction was “this is what I wanted out of Sea of Thieves.” Solid sailing mechanics, but better player movement and a better sense of purpose to my explorations and some more interesting story beats to keep me going. As I spent more time with the game, though, I felt that while there certainly was a decent story being told, so much of it is relegated to particular segments that aren’t necessarily part of your general play experience, and so much of the game is really about exploring procedurally generated islands and engaging with survival mechanics, the overall experience (for me at least) falls short of the lofty hope of having a story-heavy survival game. The story beats that you engage with are interesting and there is absolutely more to the game’s world than first meets the eye, but I would love to have seen something more meaningful in the standard loop. The end result is a survival-lite game that is much more palatable to me than many survival games, but still doesn’t give me enough substance in the story to keep me motivated. At some point I just felt like I was chasing shrines for the sake of moving forward and I wasn’t really connecting as strongly with the experience as I wanted to. It is worth mentioning that Windbound does offer a more story-focused “Storyteller” mode for players who would prefer to minimize the survival aspects, and perhaps this would be a better fit for me, but I’m not convinced that’s going to actually give those players what they’re after. 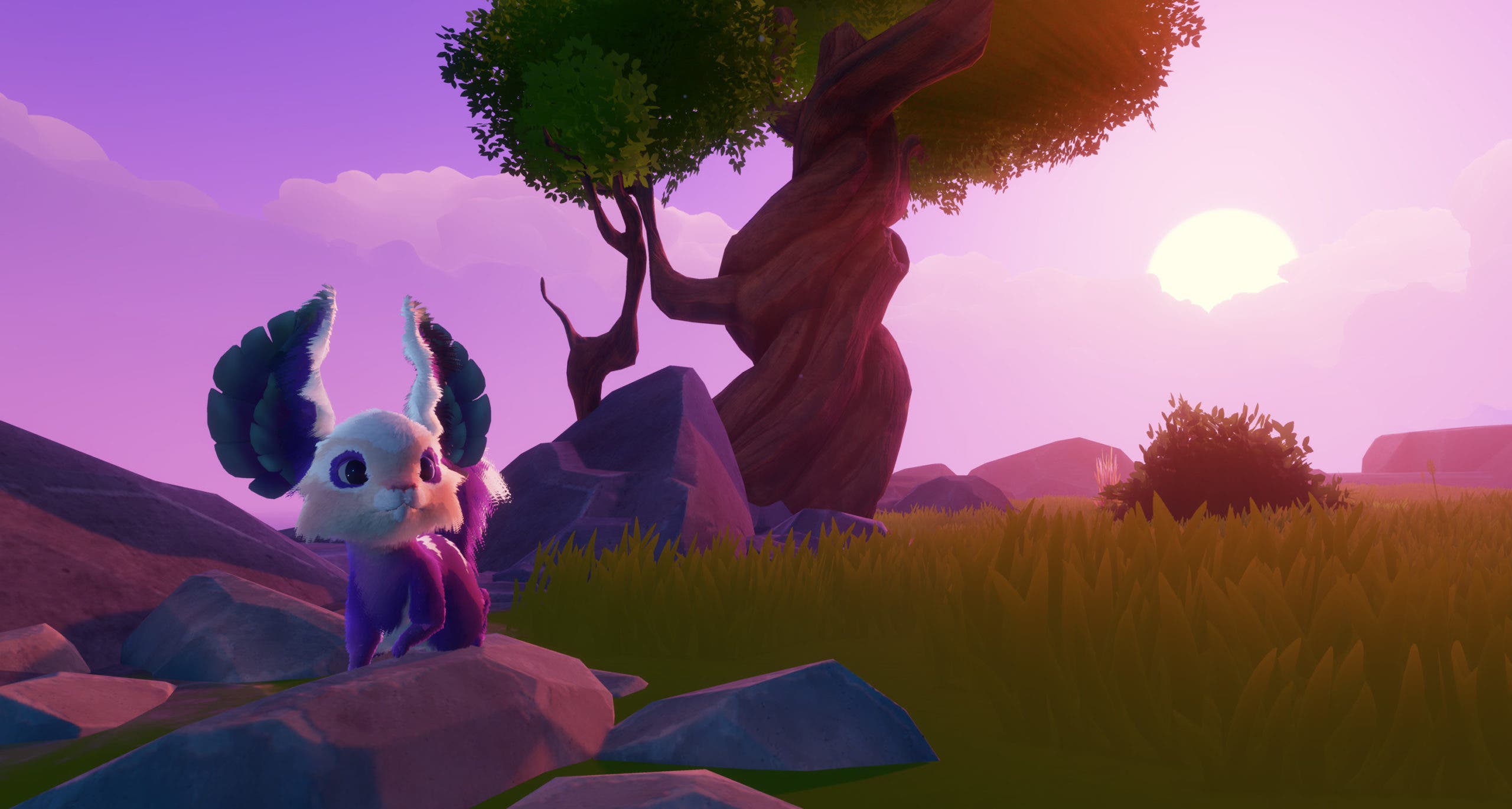 Windbound seeks to move beyond the “emergent story through gameplay” standard among survival games, and while it succeeds somewhat, I think it still has some room to grow. There are also some balance issues with some of the systems that the developers have talked about tuning post-launch, so it is entirely possible that Windbound will grow into something that feels overall really polished, but at present it just isn’t quite hitting all the right notes for me. There’s a lot to like about Windbound, and maybe with a little more time and care, there will be a lot to love. For now, it’s a strong concept with some really well implemented mechanics that just leaves me wanting for the better, more fleshed out version of this same thing. In the meantime though, it is a joyful, bright game that has enough going for it that you may want to keep dipping your toes back in. Just know that the waters may be a tad more shallow than they appear.