OWC, or Other World Computing has been in the hardware business for a while, often focusing on Macs for storage. In recent years they’ve found success in providing hardware for more, such as Do-It-Yourself Kits for upgrading drives on PlayStation 4 and Xbox One, as well as SSDs for PCs. With the Aura P12, it is a non-volitile memory express M.2 drive, an SSD that has better speed and durability over SATA, and it shows its worth. The OWC Aura P12 M.2 NVMe 2TB SSD beats every other drive in my system, hands-down.

OWC’s Aura P12 SSD looks rather basic. From the packaging to the design itself, it has an OEM look to it all with the chips exposed and no real branding on it. While the outside isn’t very exciting, it’s what’s inside that counts. And it proves that looks aren’t everything – substance over style, if you will. It’s the Clark Kent of SSDs, meek and mild-mannered on the outside, then it turns into Superman when it’s been installed to the M2 connector slot, able to unleash its power to save the day.

While it’s hard to know the lifetime of an SSD from the outset, OWC promises endurance. And if that’s not enough, there’s a five-year warranty to back it up, which can be around the lifetime of any SSD. Though, should anything go wrong, you have OWC’s free support to help you through any issues. There’s assurances here that aren’t otherwise guaranteed, so you have a good safety net if you happen to have something go wrong on you.

OWC disappointingly doesn’t have any software to install. This can be seen as both good and bad. The good is that the onboard maintenance removes the need for software, and many don’t like to bloat their system with proprietary software from each manufacturer. The bad is that you otherwise can’t get a read on remaining lifetime like other manufacturers like Seagate provides, or scan for any issues. You then have to rely on third-party tools like SeaTools SSD to get this information, which worked enough to give me the basics, but not allow for any tuning. Whether any of this is a concern for you is going to be subjective. There is no necessity for software to do its basic functions.

The Aura P12 over provisions by 7% to increase performance, it’s also a measure used to increase durability and longevity. It also has 1920GB of usable capacity, which is on-par or better with most out-of-the-box drives. OWC know drives, and offers a competitive amount of space, while also providing internal tooling to ensure your drive lasts the longest.

It’s also worth noting that M2 drives do get hot, my motherboard has thermal gel that helps keep temperatures in-check and stayed at 44C, which this slot is underneath my GPU. It was neither the coolest, nor the hottest drive in the system, but all the drives have different placements, environmental and cooling conditions.

Promises and guarantees are great, but the numbers don’t lie. Let’s take a look at some benchmarks…

It’ll be clear to see for yourself, but up-front the Aura P12 absolutely crushes Seagate’s SATA SSD offerings at every chance it gets. Whether it’s reading, writing, or random bytes, it does it better. This is also evident in the drive’s Input/output Operations Per Second (IOPS) in comparison to others. The Aura P12 then slightly edges out Seagate’s NVMe SSD drives in some cases, and not in others. As far as aggregate scores go, Anvil Benchmark highlights the Aura P12 as the winner. For more granular numbers, look to the Crystal DiskMark and ATTO Disk Benchmark results.

The drives used for benchmarking and comparisons: 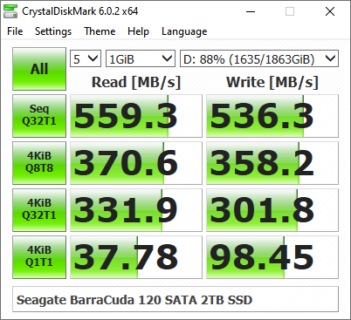 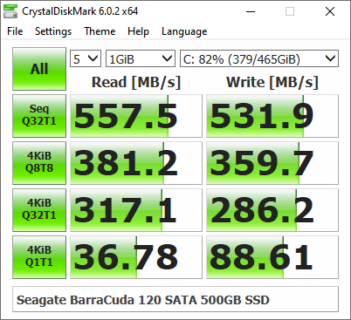 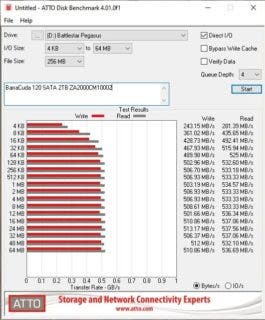 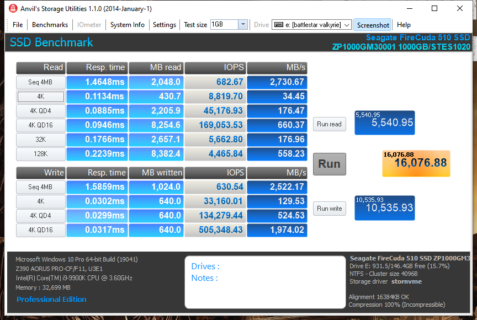 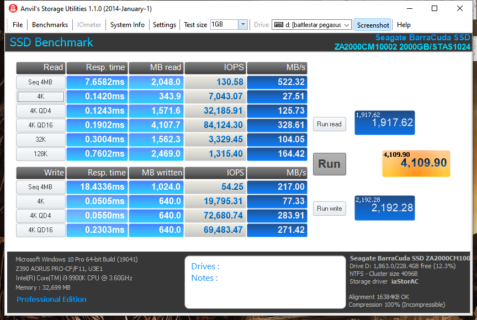 Simply put, the OWC Aura P12 is a beast. It’s a NVMe SSD that stands above the rest. Whether used for gaming, storage, or databases; it fits all types of scenarios. Its price is level with Samsung drives of similar specs. The look of the OWC Aura P12 M.2 NVMe 2TB SSD is very unassuming, but you’ll be pleasantly surprised at the power and speed it delivers. Don’t sleep on OWC, or the Aura P12 M.2 NVMe SSD for that matter.