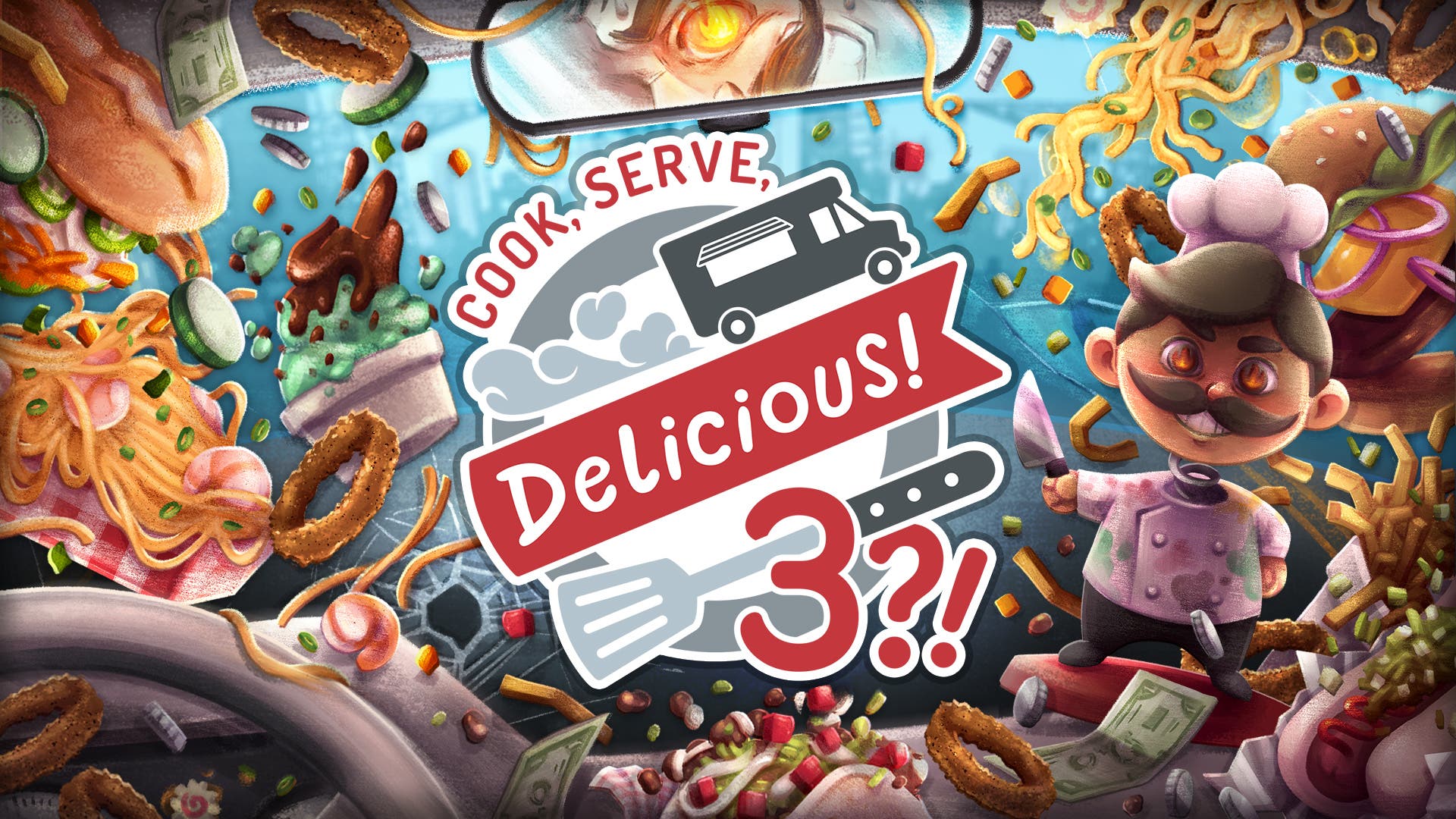 The Cook, Serve, Delicious! series has been with us since 2012 with a sequel released in 2017. It’s a series that gives me a great way to unwind, even if utter chaos is happening on the screen. So in this apocalyptic year of 2020, Cook, Serve, Delicious! 3?! is making it’s way into our hearts once again but wouldn’t you know it, the apocalypse has also come to CSD!

A tale has been slowly brewing through the last two Cook, Serve, Delicious! titles, a narrative foretold through a mere cooking game, following the antics of an up and coming chef at Teragon Tower. If you were reading the emails from previous games, you would know a little bit about what was happening in the world around your small kitchen. Honestly, it was fun to experience the story in this way, but it felt all too secondary; you had the option not to engage with the story at all. But understanding that narrative leads to CSD! 3?!

It’s the year 2041, and the United States is still engulfed in war. Many of the restaurants you’ve encountered during your rise as a famous chef have survived. Chilly Bowl went out and bought an island for gosh sakes. But for you, our chef of the renowned Cook, Serve, Delicious! restaurant, are about the get an incredibly rude awakening. Teragon tower is blown up, and you’re found in the rubble by a pair of search and recovery Guardian robots. With your restaurant destroyed, Whisk and Cleaver, the Guardians who found you, suggest they turn their rescue van into a food truck and help the chef rebuild his culinary empire. The narrative of the game then takes place one year later. 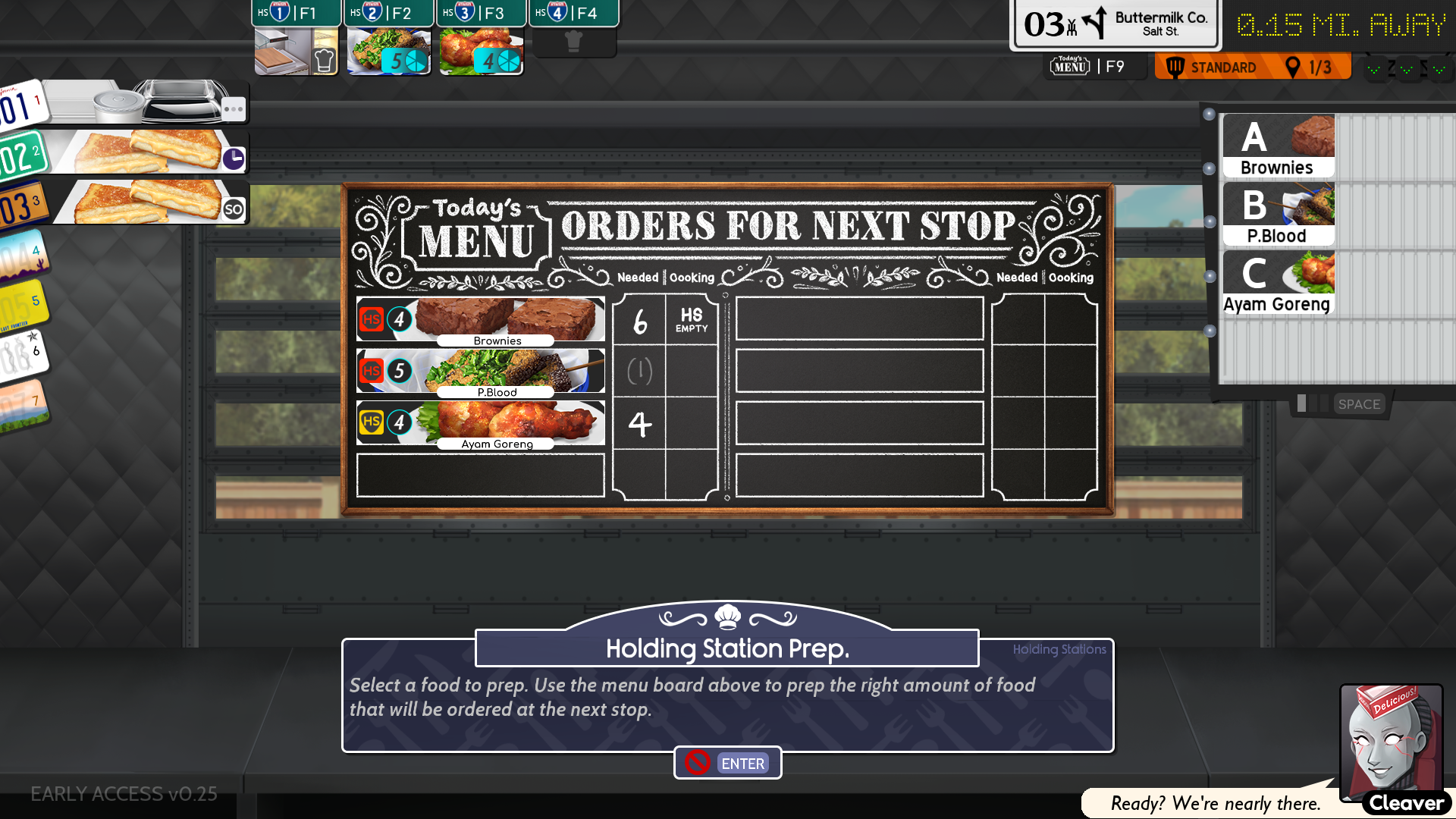 New for CSD! 3?! is voice acting! Both Whisk and Cleaver are voiced by @negaoryx and @havanarama, respectively. They do an incredible job bringing both Guardians to life. They are your standard buddy duo, in which one is the wise and serious character while the other is your happy go lucky free-spirited type. They’ll speak during cutscenes and have some lines during actual gameplay. They will also say a little blurb about how your run went when you receive your score. They’re genuinely funny, and two the VO actors have some excellent chemistry together. As I mentioned earlier, the VO work here is fantastic; with all the action happening and the focus needed to get your orders ready, you’ll still notice their lines, and oddly enough, made it feel more like a kitchen than in previous games. Their lines add that additional touch to the atmosphere. The voice acting is a welcomed addition to the series, and I look forward to more of this in future installments.

Because the game focuses on the food truck aspect, Vertigo Gaming has updated the CSD! formula to better suit the frantic nature of a food truck chef. The holding stations have greater importance in this go-round as you’ll be relying on them to hold pre-cooked food for the various stops you’ll make. The standard menu that you have encountered in previous games has now been delegated to Special Orders. These orders are not as frequently ordered as the items in your holding station. It isn’t a bad thing, though, as I felt the chaos’s flow was as intense as the older games. The game includes HUNDREDS of recipes with over two hundred new to the CSD series. Each recipe, of course, includes the incredibly gorgeous food artwork the series is known for. I have to keep myself from stabbing my Switch’s screen with a fork with how delicious it all looks. I was very excited to see a great selection of Filipino dishes as well! I tend to choose pancit in all my menus, as they’re good eats in the real world and very easy to throw together in this game. 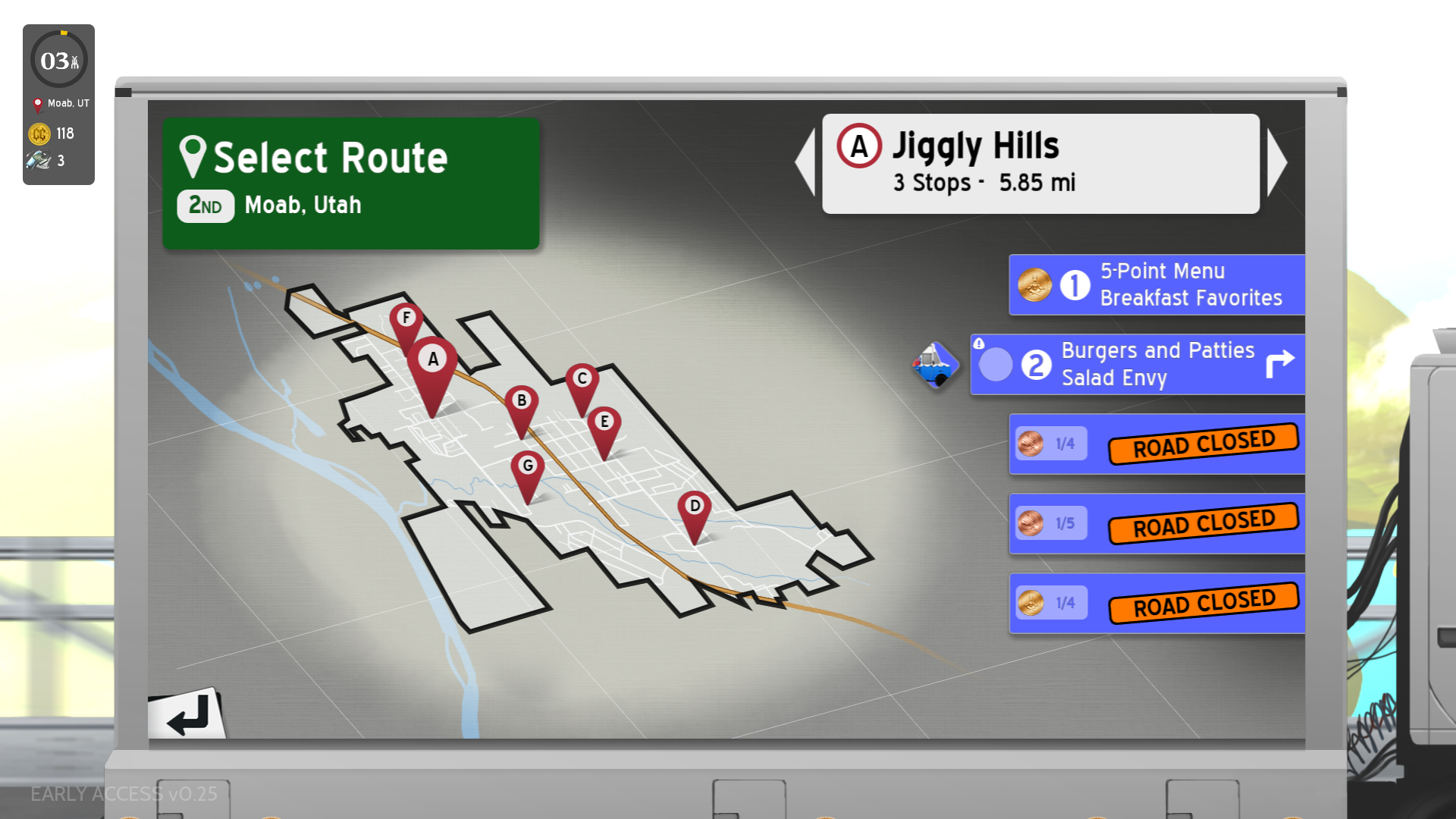 To help in your food truck endeavors, you can ask your Guardians to help serve the customers. You can perform this feat by flicking the right thumbstick when a load of orders is completed. Because the game focuses on the holding stations, you’ll find many orders will be ready to serve almost instantaneously. So having the ability to serve them all at once is a god-send. In the previous games, there were three intense waves of customers (rush hours) with a few orders spaced out in between. In CSD! 3?! you’ll make frequent stops, about three or more, and between the stops, you’ll have a short amount of time to cook more recipes for your holding stations. You’ll also receive special orders to make for people once you arrive. Even though the format has changed slightly, the intensity of the gameplay is just as fun as it ever was. Following along with the narrative of becoming the Iron Cook National Food Truck Champion, you’ll travel all across the United States, being able to play over 380 different levels; that’s A-LOT.

In Cook, Serve, Delicious! 2!! you were able to customize your restaurant and unlock new pieces to decorate it with. In CSD! 3?! you’ll have access to unlock decorative elements for your truck. You’ll earn coins from each completed day that you can then use to buy upgraded equipment, to help in your cooking endeavors, or spend it on trinkets for your truck. It’s a fun way to personalize your screen, just as it was with your restaurant in CSD! 2!! Before I get to some of my less than exciting things about CSD! 3?! I want to touch on the accessibility options quickly. You can turn off the screen shake if it makes you feel motion sick, you can adjust the colors of menus if you have a difficult time with particular colors, and they even let you turn off sound effects if you have an unsteadiness to certain sounds. It’s nice to see this level of accessibility for games, allowing as many people as possible to enjoy playing.

The Switch version of CSD! 3?! gives you the option of playing multiple ways as well. You can play docked or in handheld. You can utilize the Switch’s touchscreen to play while handheld, which in my humble opinion, is the best way to enjoy the game. Just being able to navigate all the on-screen buttons is more comfortable than figuring out which face button to press. I have that thing where I hesitate to press buttons on Nintendo controllers because they have their ABXY layout different from the other consoles. Of course, their layout was technically first, but I’m just so used to the Xbox ABXY that I get confused on which button I need to press. So if I’m playing docked, I have to put the game on chill mode, where there are no time penalties, and I can take my time to finish an order. Switch over to touch screen, and I’ll play in standard no problem. I wish that an accessibility option would be available to change the on-screen button prompts to different layouts. I would love to have the option to change the visual prompt for B to X on the screen when it actually means to press B on the Joycon. 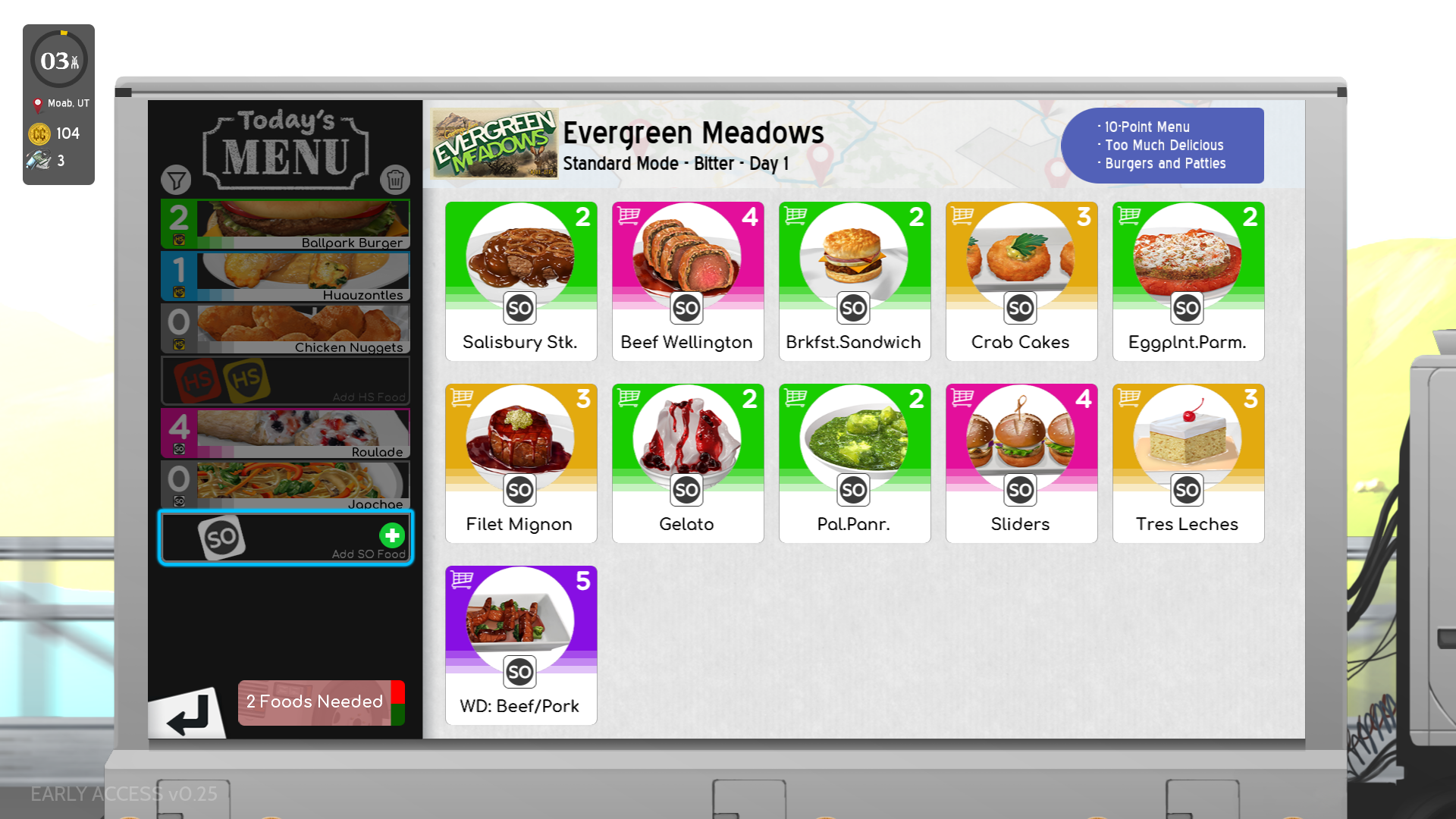 So, is CSD! 3?! a perfect game, no. A damn good one, sure! But I feel it has some issues. For starters, the biggest problem I’ve come across affects gameplay. When you first boot up a recipe in handheld mode, it takes a hair too long to load. You’ll notice this mostly with fried foods as you mash the button to shove them into the fry baskets. When you open up the recipe, it feels like the game hasn’t loaded the recipe entirely, causing it to hitch as you press the buttons. Thus, it led me to repeat button presses on more than one occasion to get an order completed. After the initial load of the recipe, though, things are fine. I’m sure this could be fixed with a later patch. The other thing I’ve run into is how often the soundtrack loops. Granted, the soundtrack is very fitting, and a bit catchy, but I swear I’ve heard, “But things aren’t the same anymore in this toooooown” while navigating menus way too often, and the titular CSD theme not enough. As with each title before it, Cook, Serve, Delicious! 3?! gave me that sense of accomplishment and satisfaction of a hard day’s work in just a few minutes. For as frantic as things can get on screen, it still feels relaxing to me, being able to keep my mind focused on the task at hand. Who knew that cooking in a fake apocalypse is a good distraction from the real one?