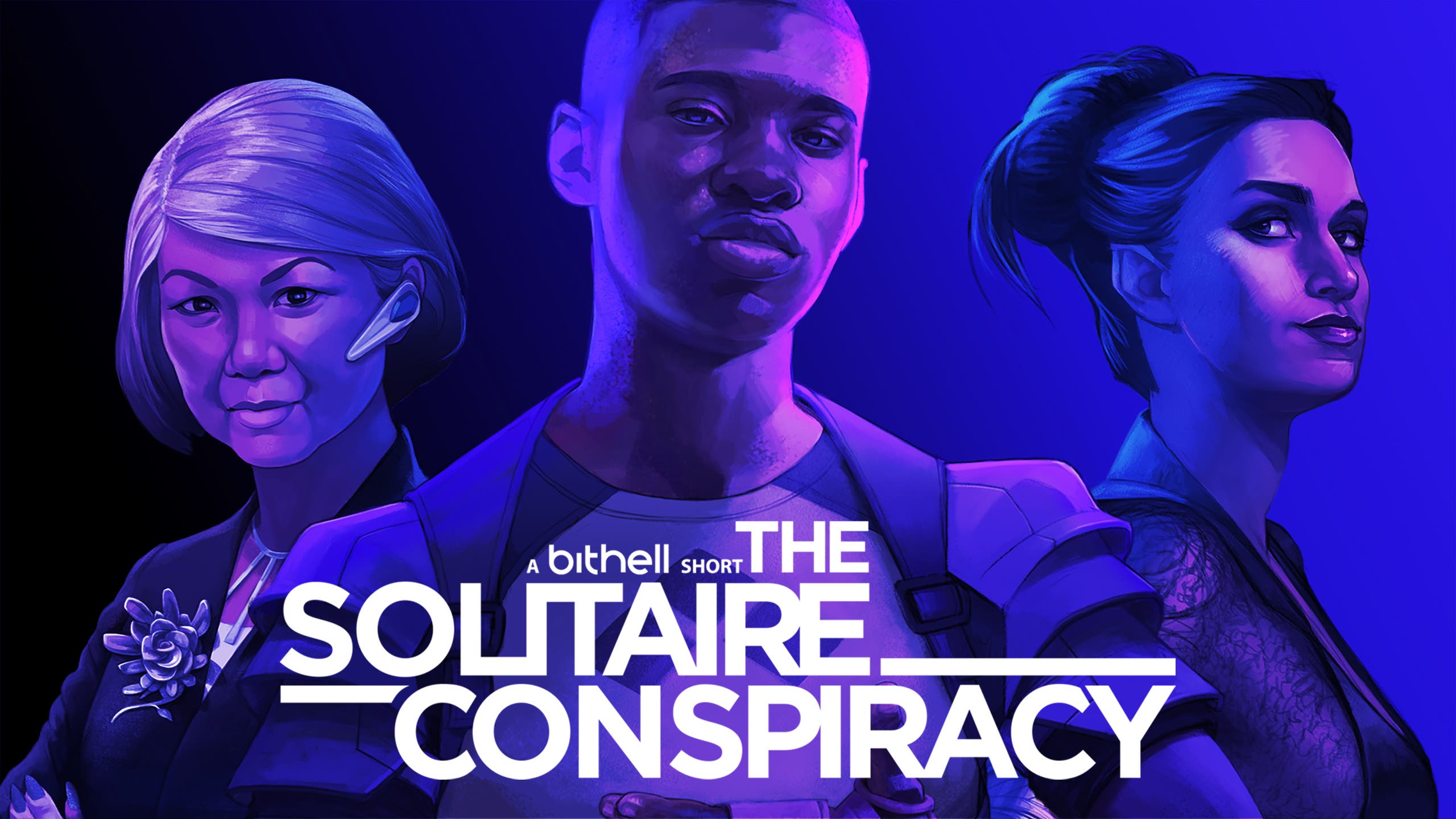 Tension mounts as the situation at the gala reaches a sticky impasse. Your agents in the field are set to extract a valuable asset from the clutches of a criminal mastermind, but they’re sorely outnumbered and the security detail may be on to them. They’re running out of time to pull the mission off before the asset leaves, and you’re sweating bullets because if you fail, well… let’s not even consider that an option. You crack your knuckles, exhale, and think to yourself, if only I could get Jack out of this corner, I could have him grab a guard and whisk him off where he won’t be able to cause any trouble. You shuffle things around, play with the arrangements, and suddenly the solution presents itself. With fingers moving like lightning across your screen, everything locks into place and you clear the board for your agents to succeed, the music swelling to a crescendo as you drop the last of the face cards onto their respective piles. Another mission in the bag, and another game of Solitaire won. 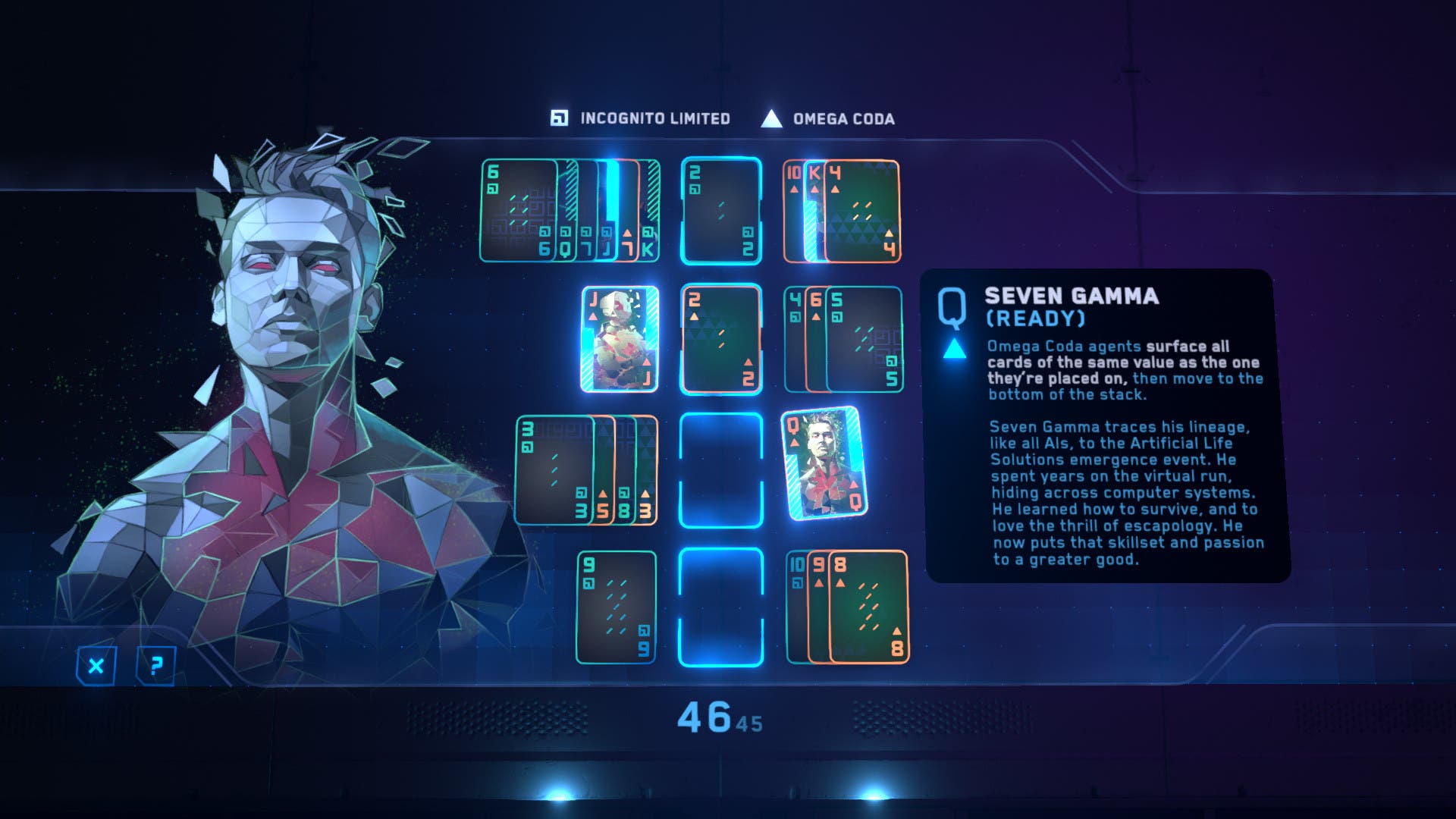 This is The Solitaire Conspiracy, the latest game from Mike Bithell and the third Bithell Short, following on from Subsurface Circular and Quarantine Circular. While this latest short is a total departure from the world in the Circular games, it shares in the concept of delivering a polished classic adventure for a modern audience, trading out text adventures for Solitaire and FMV. It’s a tale of spies, cyberspace, ambition, and the chance to change the world forever, if you can successfully navigate the web of espionage waiting for you.

Look, I’m as surprised as you are. Drama and intrigue are not exactly the first words that come to mind when you think of a Solitaire game, but The Solitaire Conspiracy miraculously infuses an age-old pastime with a level of gravitas and sophistication that Solitaire has never seen before. This is doubly impressive considering it would be very easy to try this and have it feel forced, but it works because for all of its suspense and tension while playing rounds of Solitaire, the game is equally playful during the moments between rounds, reveling in its concept and winking at you constantly to let you know that it isn’t taking itself too seriously. It’s Solitaire with an incredible amount of polish, and a surprising amount of story, and as ridiculous as that might sound, it absolutely works.

The game opens with some extremely campy FMV featuring Greg Miller as Ratio, your handler at super spy organization Protego, which is actively hunting down the criminal mastermind known as Solitaire. There’s just one little problem; Protego’s systems are locked down and Ratio can’t reach his spy crews, and he needs your help to break back into the system and re-establish control. From there, the loop is simple; complete missions by playing rounds of Solitaire to level up and advance the story, learn more about how far-reaching Solitaire’s schemes are, and restore control of Protego to take him down.

The actual rounds of Solitaire are a unique version of the rules that are clearly tailored to enable you to make progress, and each “puzzle” is intended to be totally solvable. You can stack any card of any suit on top of any other higher value card, which makes rearranging cards to find your way out of a pickle much easier than in the version most of us grew up playing on Windows. But, the real game changer is the way Crews (the deck’s “suits”) work; each Crew comes with a unique ability that can have an effect on the board when one of its face cards is placed on a stack. One Crew can shuffle all of the cards in its stack; another can “explode” every card of the suit its placed on to the other stacks on the board, or another can drag a card to the bottom of its stack along with itself. This opens up a whole host of options for digging yourself out of a tough spot, or occasionally making things worse, if you play your cards right. 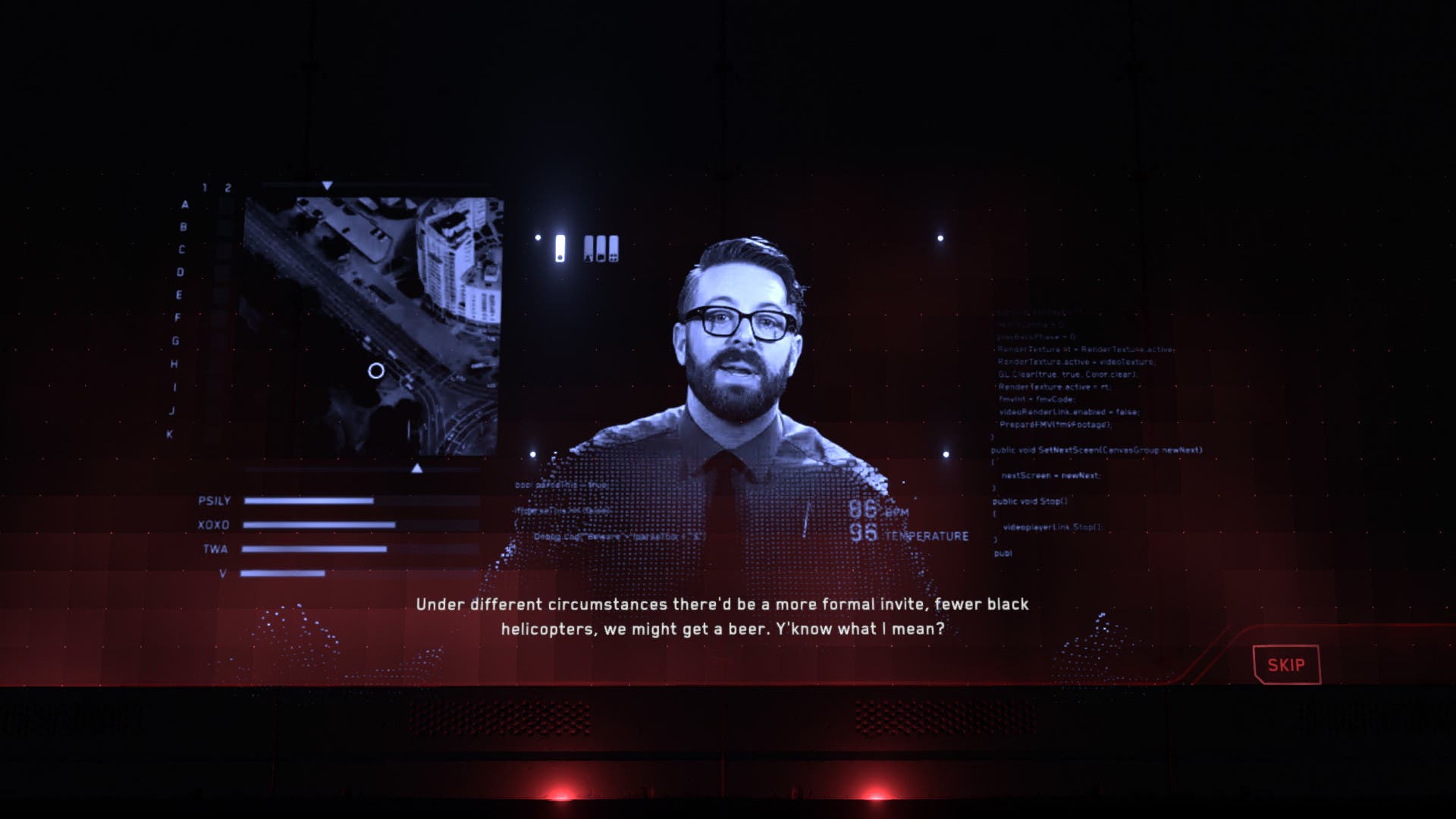 Everything you experience in the game plays out within your computer’s super sleek, ultra futuristic, neon-tinged interface. The design of every single element on screen is utterly beautiful and deliberate, making excellent use of negative space, digital textures, typography, and illustration to create a fully immersive art style that feels like you’re getting to play with some of your favorite made-up UIs from movies and TV. The animation of the deck of cards falling into place is mesmerizing every single time I see it, and every last bit of the experience is so well polished you can practically see your reflection in the game as you play it.

The FMV story segments are highly evocative of the classic days of FMV games, with some lovely visual effects applied to the video sequences to make them feel like they are truly being projected into your cyberspace desktop. Greg Miller’s performance initially comes off as feeling over the top, until you realize this is entirely by design and intended to feel campy and overacted in the way that 90s FMV always did. It’s a love letter to the progenitors of the technique in that way, and it’s fun seeing Miller (and Bithell) play in this space in a very knowing fashion. Honestly, as much fun as it is to play rounds of Solitaire, I found myself driven to complete them not just for the sake of winning, but to get to the next story sequence. It turns out I’m a sucker for some good FMV in games after all.

Solitaire is not a game that lends itself to telling an interesting story, but here in the trappings of a spy thriller in which you’re the big brain running a complex operation, it feels very gracefully and even meaningfully entwined with a narrative experience that’s got great production across the board. It doesn’t overstay its welcome either, clocking in just shy of two and a half hours to complete, but in case you can’t get enough of the actual Solitaire in The Solitaire Conspiracy, you can replay the campaign at a higher difficulty, try the game’s Skirmish mode to try out different deck combinations, or dive into Countdown mode to engage in some leaderboard driven challenges. 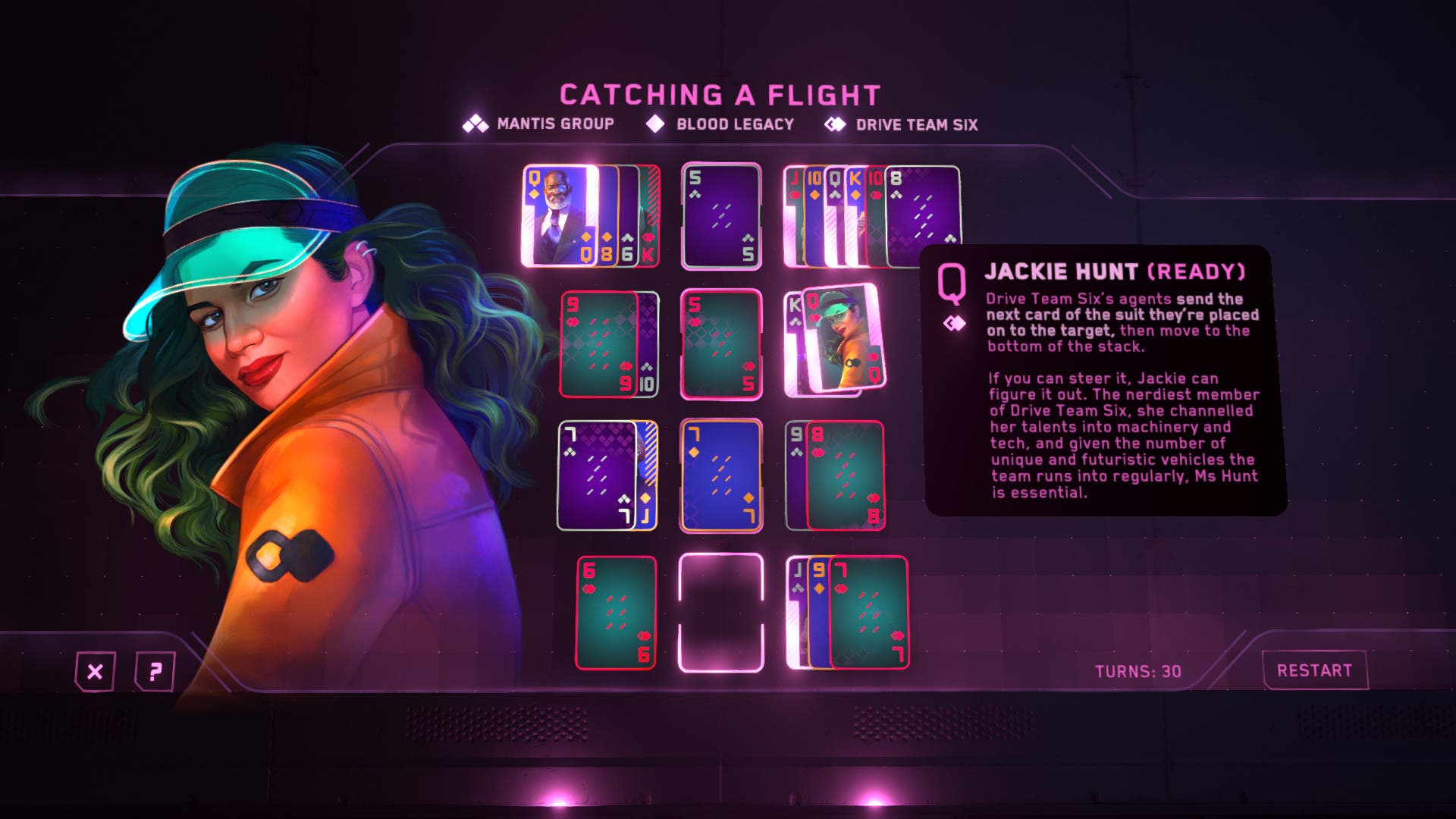 The Solitaire Conspiracy almost shouldn’t work, but it’s an example of that rare bit of alchemy that manages to fuse together two things that have no business occupying the same space into a shiny, exciting new thing that’s a joy to behold. You could certainly break down the game into its distinctive components, but there is a throughline that runs through all of it that doesn’t just tie those elements together, but makes them feel like they belong in this place with one another. It’s not necessarily a revolution in gaming, but the story is cheeky and fun, and the Solitaire itself is fun enough that you’ll want to keep it installed to continue playing well after the credits roll.