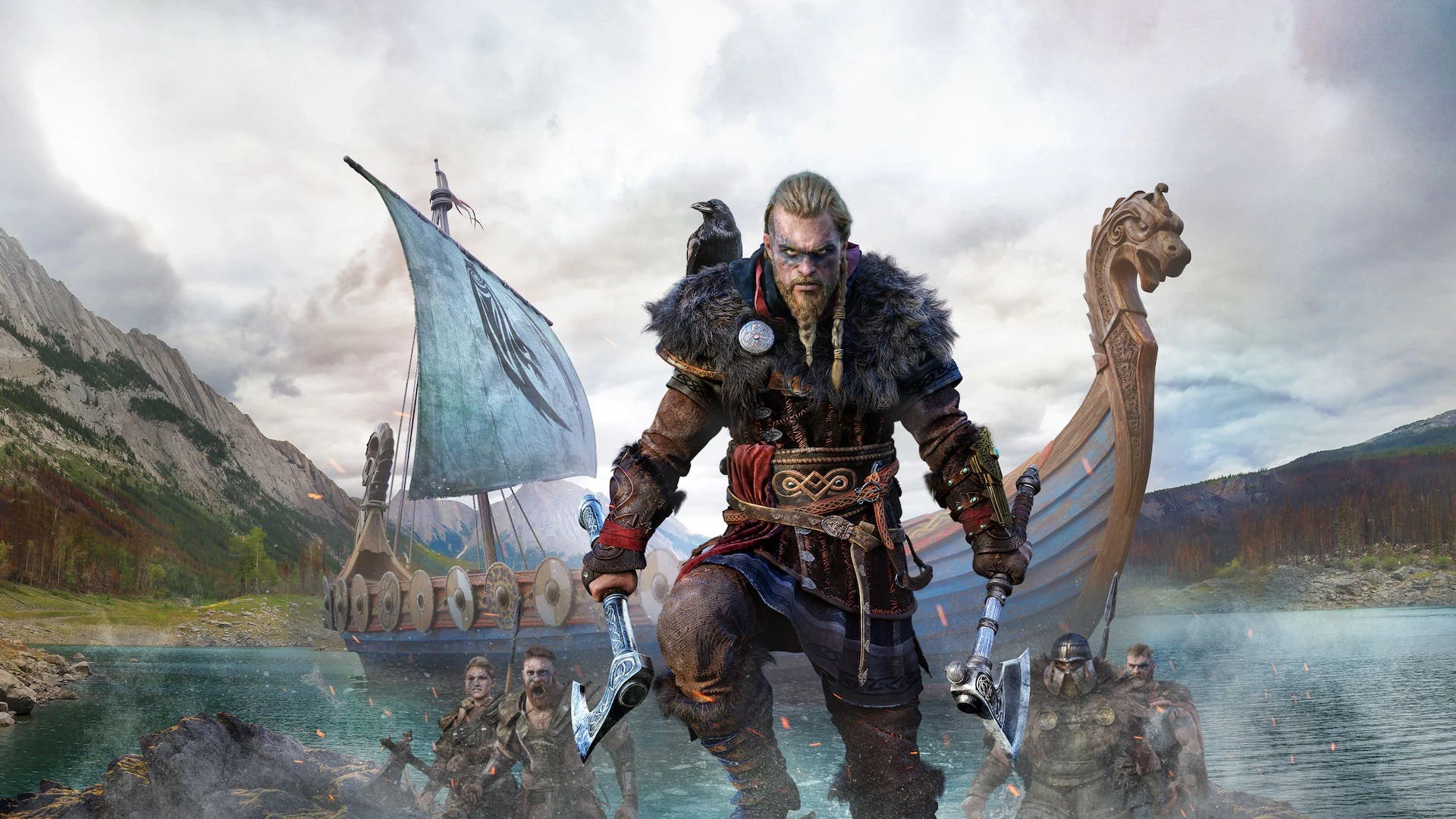 Valhalla focuses on Viking culture. From noble warriors, longships, raids, and Norse mythology, Valhalla touches them all. The story follows the adventures of the Viking Warrior Eivor as he or she hunts down the Order of the Ancients, the current name for the Templars in this period. Staring in Norway and making your way to England, the story unravels with twists and turns as you would expect from any Assassin’s Creed title.

Unlike Odyssey, where each gender was a separate character, Eivor is just one person, no matter which you choose. The story stays the same for both, and it’s only for your personal preference. They even give you the option to play as both genders throughout the story mode, using an in-story explanation that the Animus is picking up two data streams. You can let the Animus decided to use which stream is strongest at that part of the story. You’re also freely able to swap genders on the fly. I will say that I’m not a big fan of the voice work done for either of the main characters this time. They’re not terrible or done poorly, but the bar was set pretty high with Bayek and Kassandra’s voice actors. Also, something to note, I don’t believe the game pulls any information from Odyssey’s save file, but I do recall that they mention Kassandra when referring to Odyssey story bits, so it seems that she is the canonical hero for Odyssey. 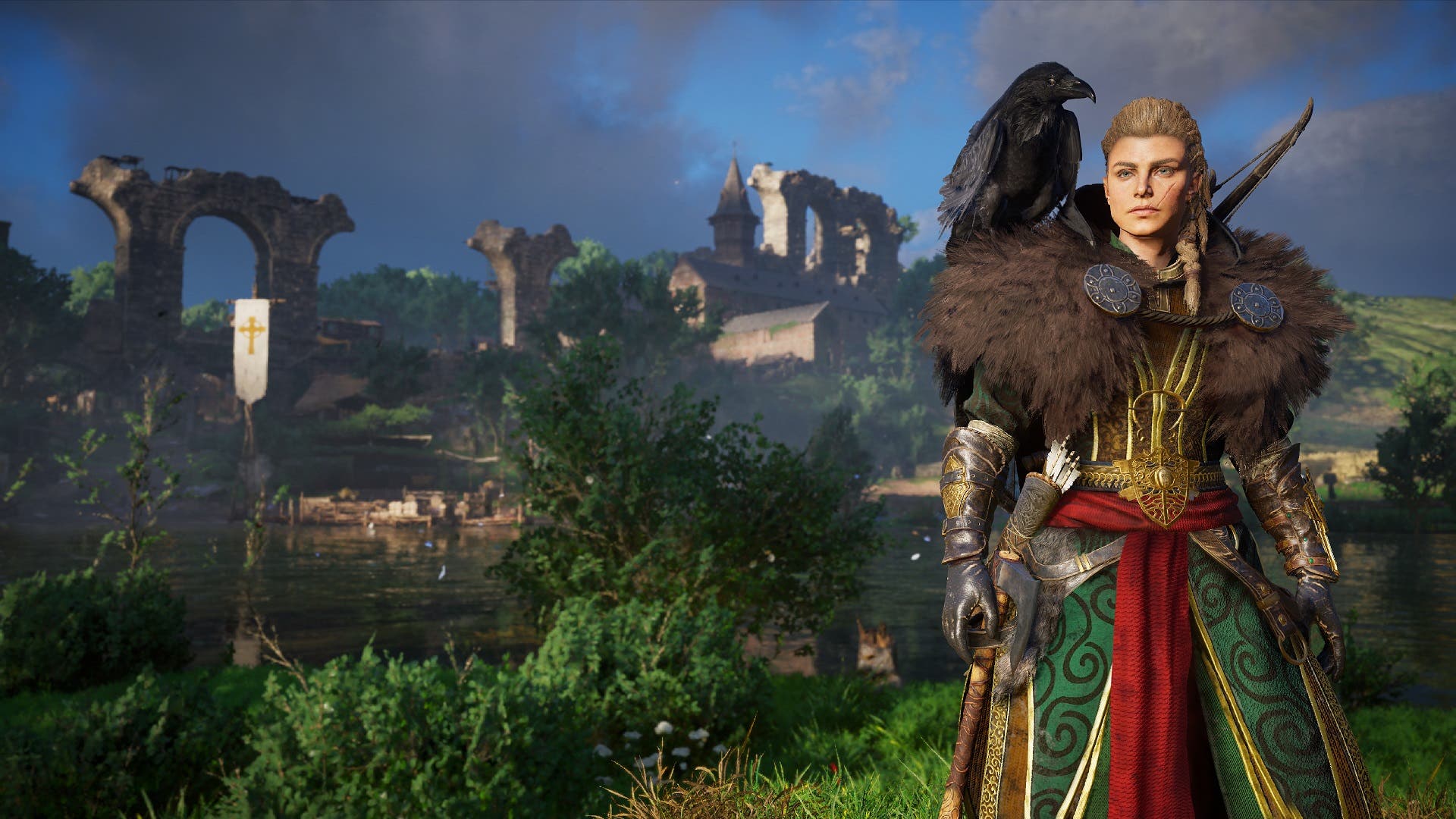 As mentioned, Ubisoft builds upon the fantastic gameplay from its last two entries in Origins and Odyssey, keeping the RPG mechanics that were so successful in those two games but also adding much-needed stealth mechanics that the franchise is known for. With that comes some streamlining, though. They have cut some of the fat around the edges in Valhalla by reducing the amount of gear you’ll acquire from loot. Valhalla drops the need to continually find equipment by giving you a blacksmith to upgrade the gear to higher tiers. The loot grind is still there because you’ll need to locate the materials needed for the upgrades, but the days of having your inventory loaded with 50 different variants of weapon are over.

I found the upgrading/crafting system in Valhalla to be far superior to what was built into previous games, especially in this new trilogy. You can take looted materials and upgrade your gear right from the character menu, not having to see an NPC and dedicating extra time to do so. Each piece of equipment is upgradable, and you can even spend your materials to increase the tier class of each item. For that, though, you do need to see the Blacksmith, but it is worth your while as you’ll end up adding abilities, rune slots, and added stats by doing so. Because they streamlined this system, it gives you more time to explore the world without having to fast travel back to a spot all the time. 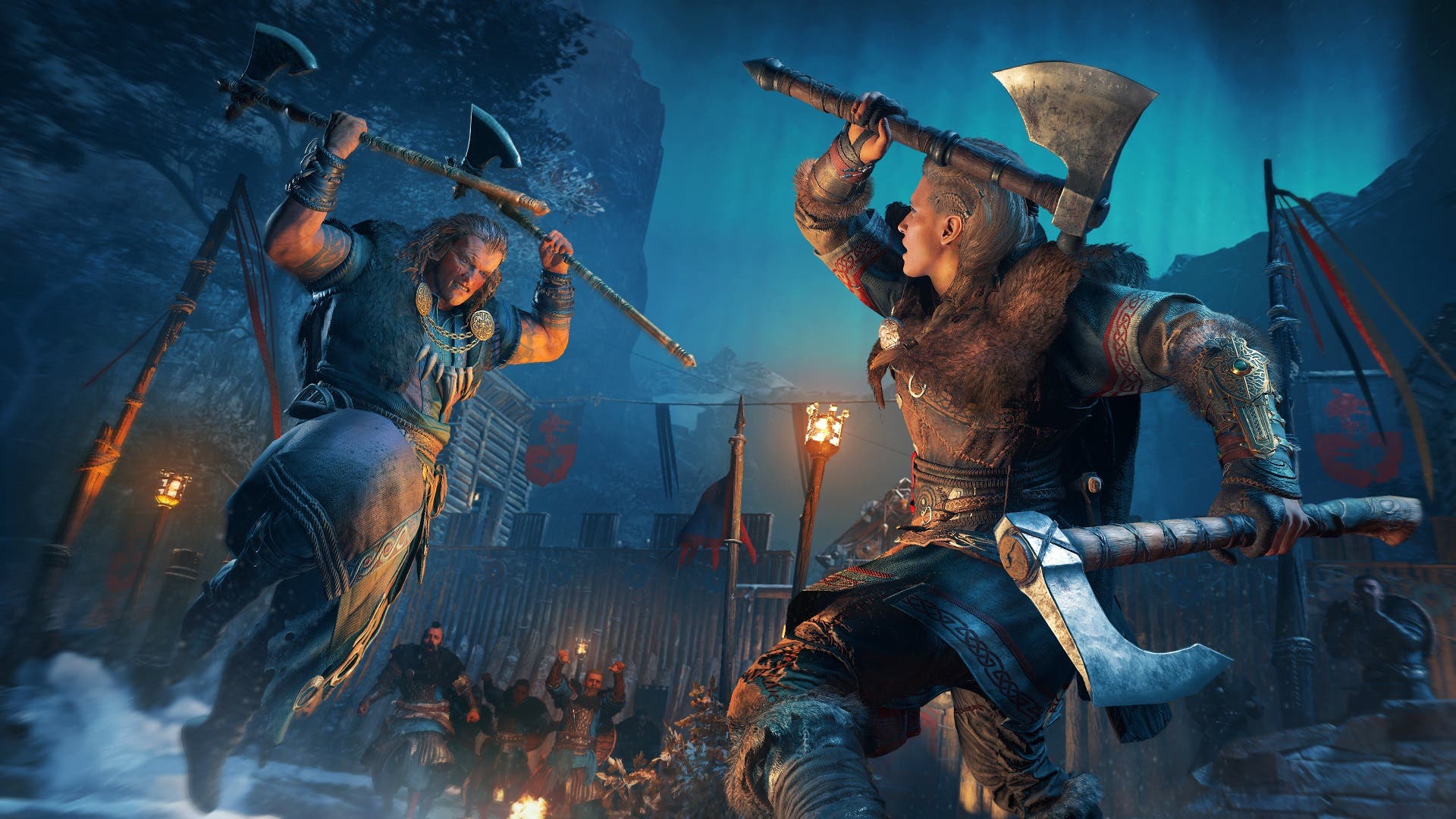 Although, you do still have a location to travel back to continually. Valhalla introduces a settlement mechanic. Similar to the homestead from Assassin’s Creed III or the mechanic from Brotherhood. You’ll build up this settlement with vendors that will help you along your journey. It’s here that you will unlock places like the Blacksmith, the Stables, and the Trader. But to do that, you need building materials and supplies, and to acquire these, takes us to the new Raid mechanic. There will be Monasteries on the map that house wealth and supplies, and to get a hold of these yourself, you’ll want to hop in your longship and take your party raiding. Get close enough to the shore of the Monastery, and you’ll be prompted to start the raid. Once activated, Eivor will sound the horn, and your crew will hop out and make their way to the riches. The goal here isn’t necessarily to kill but to pillage. There will be gold icons on your map that you’ll have to get, and more often than not, you’ll need to bash down a door or push open a chest with help from a crewmate. Once you’ve looted each gold icon, the raid is over. It’s fun even if the battles don’t feel all that large. The battles in Odyssey felt more massive, but maybe that’s because they had more NPCs in a tiny space versus a whole town of people.

To assist your raiding is another new mechanic called a feast. You can feast at the longhouse before a battle to increase your health during raids. You’ll want to unlock one of the culinary specific buildings in your settlement to do that thought, places like the bakery or brewery. Other facilities you can open up in the settlement will add even more mechanics to Valhalla’s gameplay. You’ll open up a fishing hut that will give you a fishing rope to fish with and a hunting lodge to hunt critical animals that you can eventually mount in the longhouse. You’ll even open up a barracks that will allow you to create a Jomsviking; a player-created Viking that you can assign to your raiding party. This created character will also visit other player’s games and let them add your character to their raiding party. 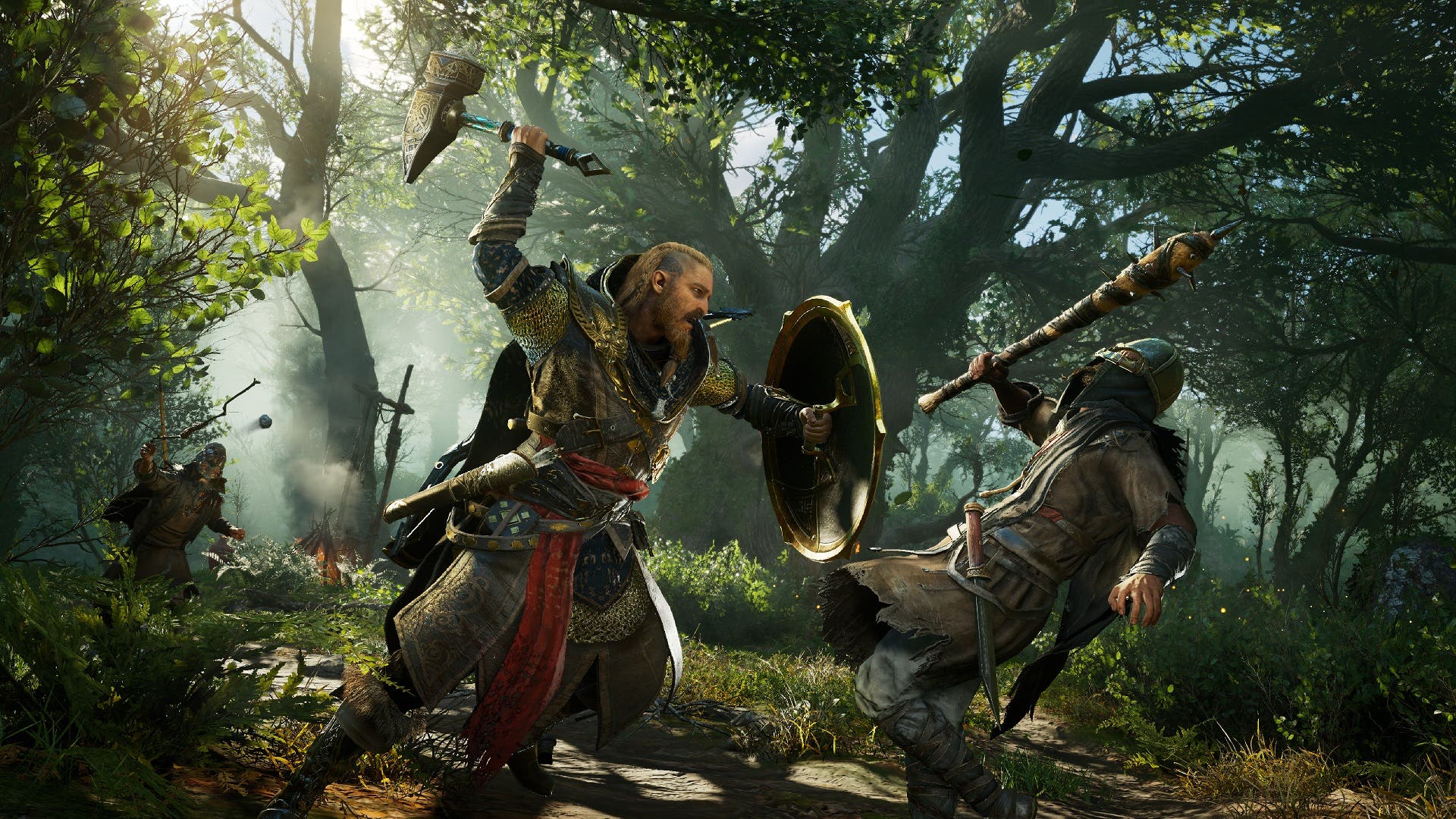 With all the time put into building up your settlement, you’d almost forget that you have to build up Eivor as well. As you progress, you’ll earn XP that will award you with Skill Points to use in a new skill tree. The tree is modeled after the sky’s constellations, with each constellation housing one specific character ability. Surrounding the ability are nodes of upgrades, and like a spider-web, each node is interconnected with other particular nodes, creating a path to unlock abilities. You’re not restricted from unlocking anything as long as you have the skill points to use. The skill tree can be filled out the way the player wants, leading to more personalized Eivors for each player. If you feel you went down a bad path on the tree, you can respec at any time with no penalty.

You can customize your Eivor a little bit as well by giving them new tattoos to apply or hairstyles to wear, but that’s about it. Some gear will unlock new looks with higher tiers, and you can wear any gear but hide it in the game. So if you hate the way something looks but like it’s perks, hide that sucker. You also have the option to put your Assassin’s hood up or down on the fly. It’s not only for looks as it’s also another mechanic in the already mechanic dense game. If you have the hood up, it functions very similar to stealth mechanics from previous Assassin’s Creed titles. You become harder to spot in crowded areas; enemies will spot you only if you get too close. You can even blend into your surroundings with specific locations like benches and tables and such. 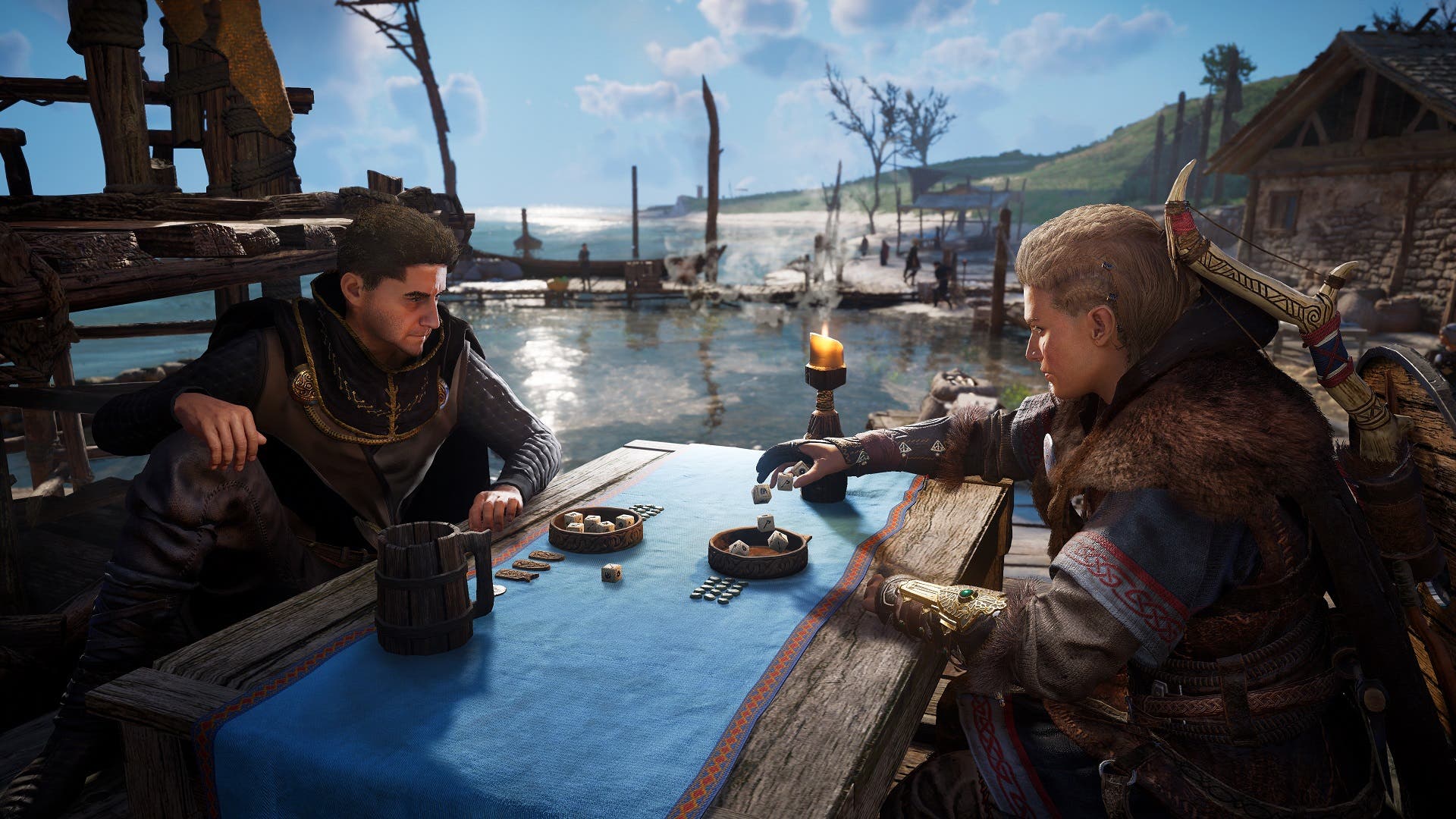 As you can probably tell, Valhalla is a huge game. It gets even larger when you open up the map. You’re split between multiple continents this time, so the map is slightly broken up versus the vast world of Odyssey. To help with the icon overload so frequently found in Ubisoft games, Valhalla had streamlined the map’s contents. You’ll now see that the icons are small round glows around the map. They’ve taken these and broken them up into “world events.” The color represents one of three options like wealth, where what you find at that location is of value like rare loot or chests. Another color represents mysteries, which are usually side quests from residents of this world. The final color being represented are secrets, which are typically your collectibles. I’m personally impartial to this new way, as it feels just as effective as the old visuals. The only thing I’ve found to be a nuisance is that if you try to set a waypoint to a marker, it doesn’t always snap to the marker. But positively, when it does, it gives you an elevation indication in-world to help you figure out if the item is above or below you. 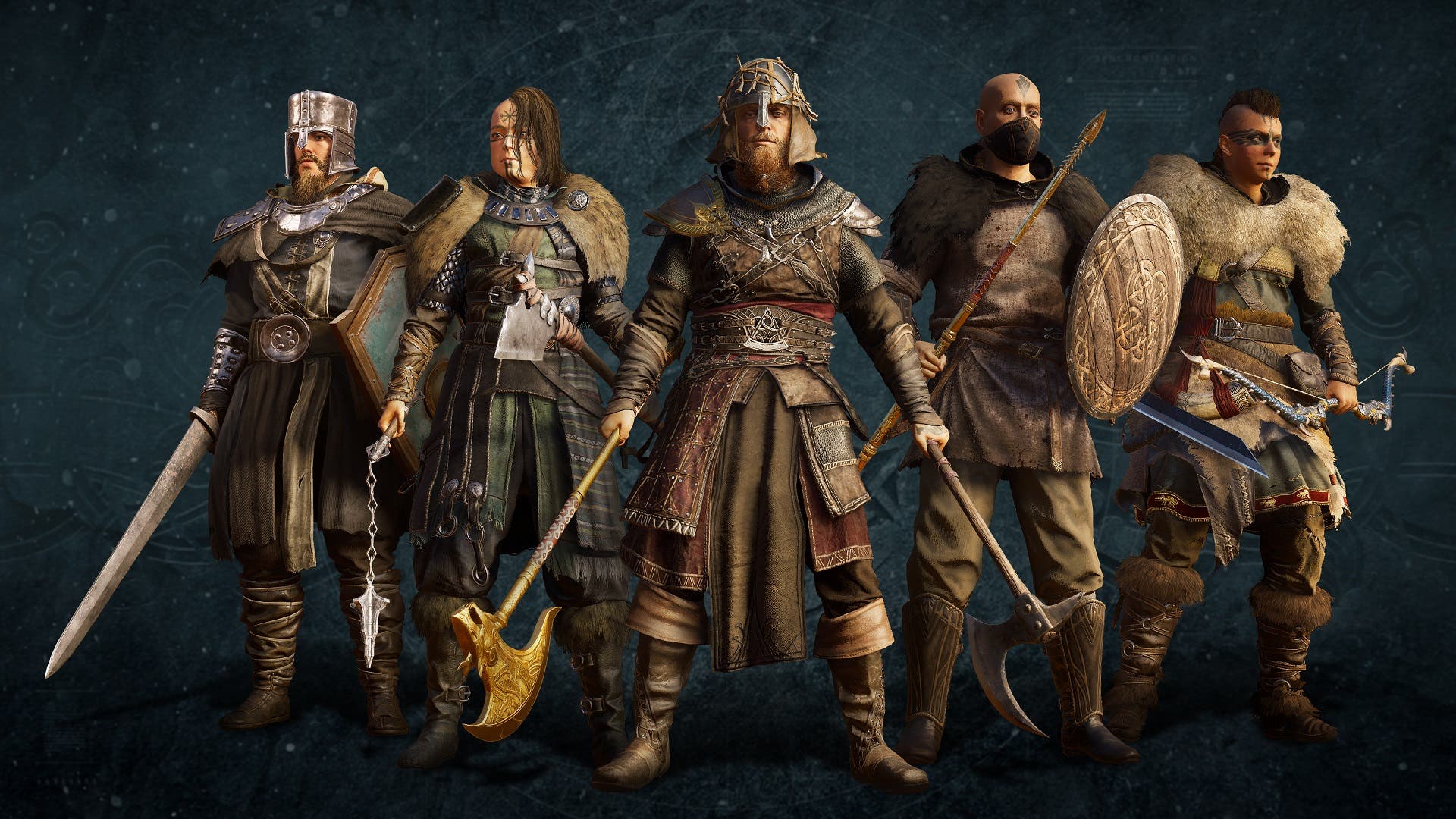 Peppered throughout the map are high profile targets, similar to that of Odyssey’s mercenaries. The same mechanics apply here as they will seek you out and are incredibly strong. Along with that, you’ll be hunting members of the Order of the Ancients. These are targets who have a connection to the Order of the Ancients, and killing them, will lead you eventually to the leader of the order. It’s the same setup as in Odyssey and Origins, so be prepared to scour the map for these folks.

I played this on a base PlayStation 4, and the game still looks absolutely beautiful. I can only imagine how good it looks on those shiny new consoles, though. To simplify my thoughts a bit, it looks good, if not better than the previous two games. I feel the lighting in this one focuses on the additional lighting effects in the newer consoles or features like HDR because most of the lighting in this game feels a little overly harsh. It’s not bad or distracting, just something to make a note of if you’re playing on previous-gen base consoles. 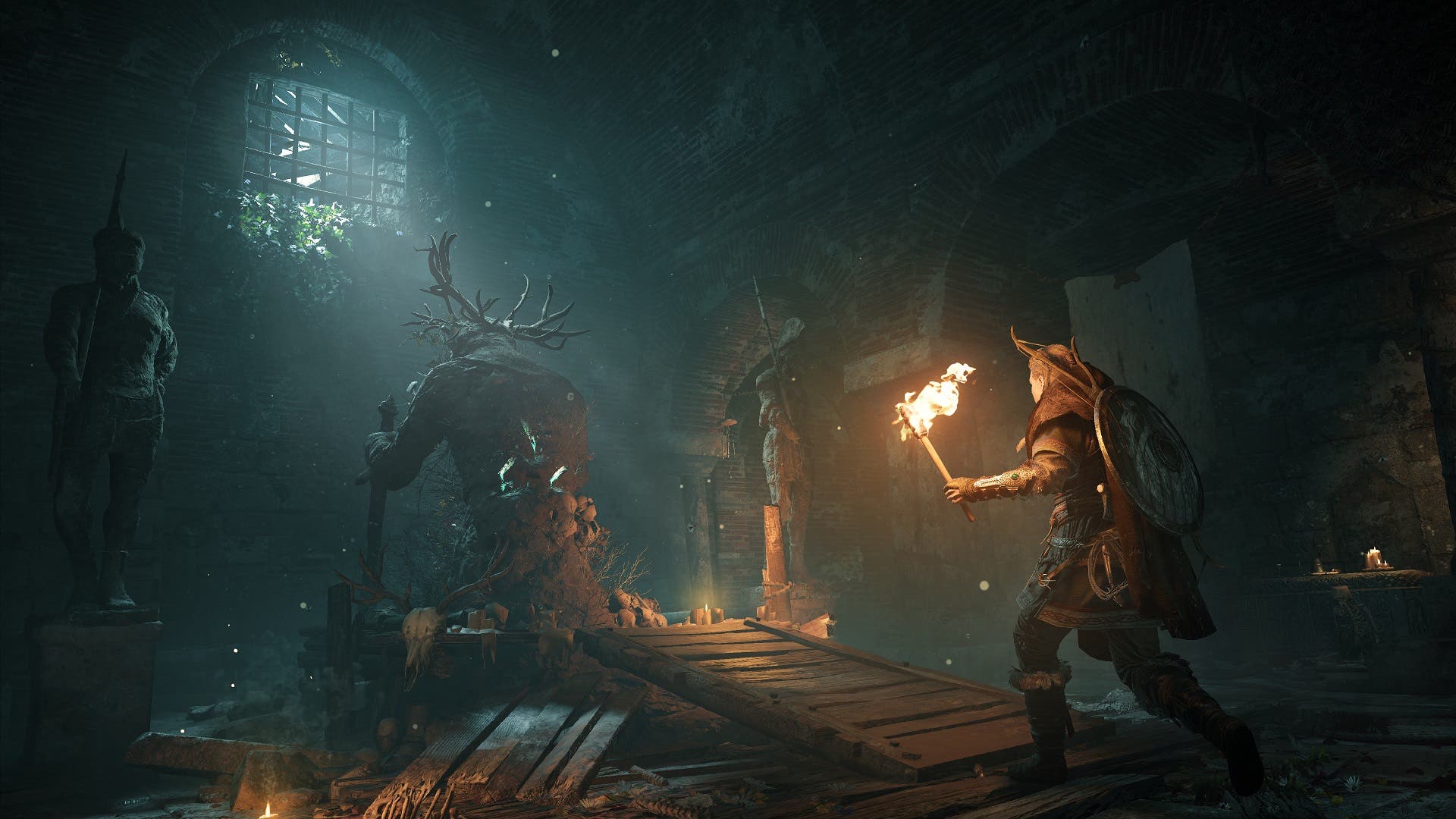