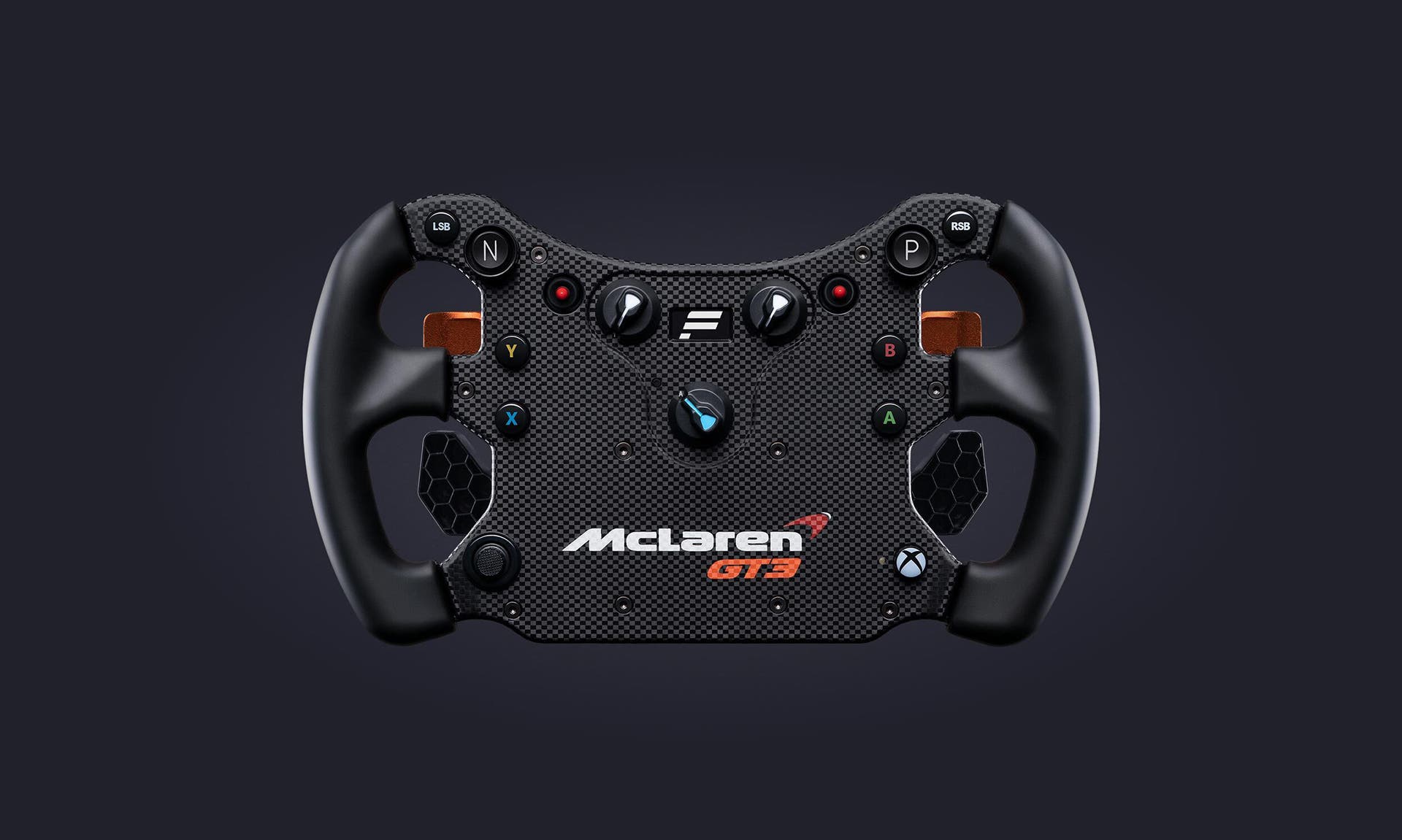 This is an absolute must-own. The CSL Elite Steering Wheel McLaren GT3 V2 does have decidedly narrow focus for its uses in racing games, but it is the pinnacle offering. For me, this will be the primary wheel of choice as it fits more towards the type of racing I do. However, the quick release system does make it easy to swap them out. The CSL Elite Steering Wheel McLaren GT3 V2 is the most eye-catching, versatile, and comfortable wheel I've used to-date, and is Fanatec's best.

Fanatec has just released the CSL Elite Steering Wheel McLaren GT3 V2, and it is a staggeringly gorgeous wheel to behold. This is the second version of the McLaren GT3 wheel, now reintroduced and compatible with the ClubSport Light Elite Wheel Base, as well as all other current wheel bases. This is a wheel designed for the grand touring style of racing, much like the Formula One wheel was designed, offering a replication of the real thing for home use. This wheel is officially licensed by Xbox, is PlayStation-ready, and just works on PC. This is a serious wheel for hardcore simulation racers, and it takes first on the podium.

This is a full-scale replica of the wheel used in the 2015 McLaren 650S GT3 race car on the circuits. If the McLaren branding doesn’t grab your attention, the burnt orange paddles might, or the carbon fiber surface will. It’s hands-down a very pretty wheel to look at. But it gets by on more than its looks. It’s 300mm in diameter, the same as the CSL Elite Steering Wheel WRC. Compared to the CSL Elite F1 Steering Wheel, to which it will most likely be, is nearly identical. I’d say the McLaren GT3 V2 wheel is thicker, and has greater depth while maintaining the same weight the other wheels from Fanatec. This is a wheel where you want to get immersed into the action, and you will.

Whether you’re a part of the ClubSport Light Elite ecosystem or not, this is a frontrunner for “the” wheel if you’re playing games in the GT and F1 space like iRacing, F1, and/or Assetto Corsa. I say this because while you could argue that the WRC is the one to get for all things racing, it has its limitations despite its greatness. Sure, the F1 wheel is sleek, but pales in comparison to the refined McLaren GT3 V2 found here.

The CSL Elite Steering Wheel McLaren GT3 V2 comes with the Simplified Quick Release Adapter, which uses the same design as the WRC wheel, in which you rotate to lock the wheel into place. Fanatec sent me the ClubSport Quick Release Adapter (black) to swap it out with, which is more in line with the F1 wheel. I think having used both, I prefer the ClubSport variant of the Quick Release system, as it feels like you’re actually taking a wheel on and off like the pros do. There’s no need to get the adapter, but it just comes down to preference.

You can de-platform the buttons on the wheel from its default Xbox presentation to a more accurate representation of the McLaren 650S GT3 it is based on. The wheel kit includes a set of stickers to mark it like the real thing, and assign the controls accordingly. It’s a really neat addition, and one of the rare times I actually care about stickers.

You’ve Got The Touch

The clutch uses individual paddles, where as the burnt orange gear shifters are a shared seesaw style paddle. It rocks back and forth as you pull either side. I’m indifferent on how the shifter actually works, but I’m certainly more used to individual paddles on the whole. I think this is by design, to separate itself from the other paddles designed for other purposes. There’s a tactile and movement difference between both, that makes it really hard to confuse the two. What also helps by the the included independent paddles, is that when they’re used as a clutch, there’s no real need for a dedicated pedal if you don’t have one. Given its design, gloves are recommended when using it, but not a necessity. The rubber grips of the wheel are solid, but doesn’t feel like it will rub off on your hands during use.

I found that the buttons are way more accessible than the F1 wheel, where most of them could be reached by my thumb with ease. Only adjusting the knobs required taking one hand off the wheel to adjust. I set the knobs to control ABS, traction control, and stability control, and it felt cool to literally dial it in. 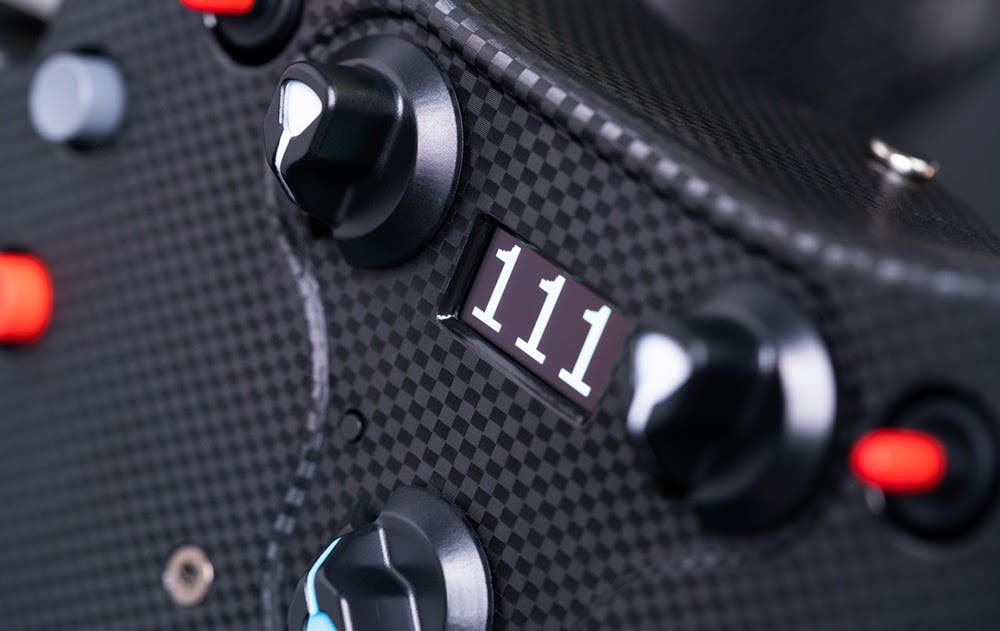 While the wheel is officially licensed with both McLaren and Xbox, the branding is not off-putting nor detracts from the overall presentation. This is a wheel that I’m constantly impresed by the more I use it and find its hidden secrets. It’s an outstanding wheel, with a lot of customization options.

There’s a couple of black & white knobs that offer 12 positions, as well as a blue & black knob that has 4 positions. The blue & black buttons offer four different settings for the black paddles: in position A, you get the clutch bite mode for both, position B assigns the left paddle for handbrake and the right for clutch, position C sets the left paddle to brake and the right to gas, and finally position D allows you to use them as extra axes. There’s switches that can be keyed for wipers, ignition, or other tasks you want. The d-pad is a bit innocuous, as it actually is a knob that can be rotated to perform different functions as well. Like the real thing, there’s even dedicated (N)eutral and (P)it buttons. Though I thought for sure the N and P buttons would light up, but they do not. There are a few changes to the wheel from its McLaren 650S GT3 counterpart. First is the removal of the third 12-way knob in favor of a 1″ OLED (white) screen, it’s small but informative. All the switches and knobs let you fiddle with changes like you see in animations for GT and F1 games. 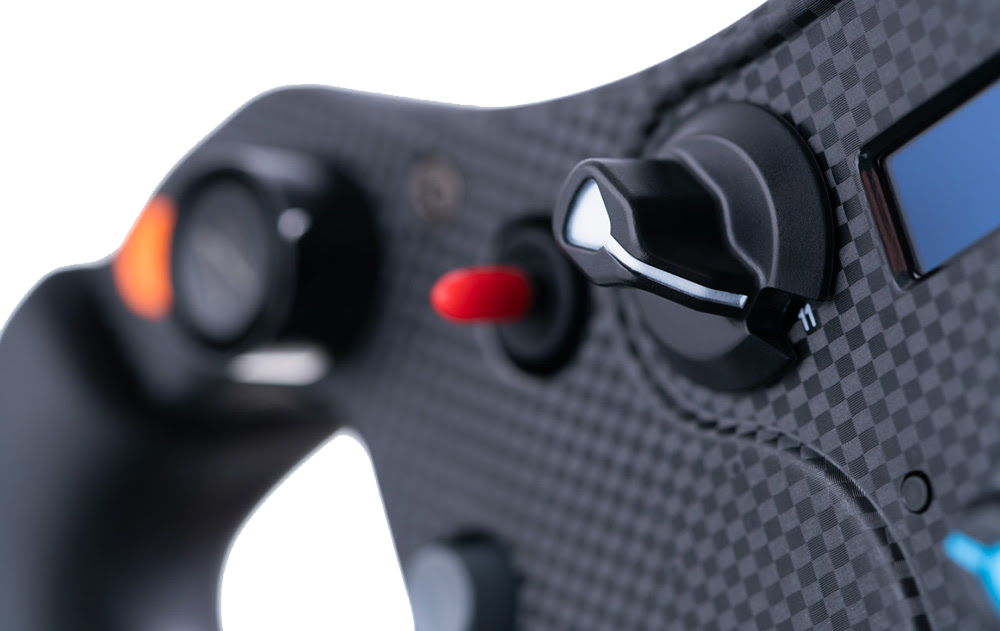 Since the wheel is branded as McLaren, it’s easiest to play games like Assetto Corsa and Assetto Corsa Competizione, and Automobilista 2 for the style of racing they offer. However, games like F1 2020 also fit wonderfully, even if the ergonomics of the wheel are slightly different. You’d have no issue getting accustomed to playing the game with this wheel. When you get into the higher tier of racing found in Forza Motorsport 7, the wheel excels for the GT car classes.

For non-simulation racers, I had just about the same experience with them in prior games. Project CARS 3 just refuses to work with Fanatec wheels for whatever reason. But the excellent Forza Horizon 4 works well, even if most of the cars are road cars and few use cases for how the wheel is designed. DIRT 5 recently received wheel support, and it works well in terms of detection and playability, but the gameplay doesn’t serve it well.

Because the wheel base remains the same, game compatibility does as well. A lot of the issues I had in certain games remain here, and the games that supported the wheel base prior have no issues with the CSL Elite Steering Wheel McLaren GT3 V2. It’s so smartly designed, that it makes you wonder why nobody thought of this before. It’s an expensive way to do it, but undoubtedly the best. This is an absolute must-own. The CSL Elite Steering Wheel McLaren GT3 V2 does have decidedly narrow focus for its uses in racing games, but it is the pinnacle offering. For me, this will be the primary wheel of choice as it fits more towards the type of racing I do. However, the quick release system does make it easy to swap them out. The CSL Elite Steering Wheel McLaren GT3 V2 is the most eye-catching, versatile, and comfortable wheel I’ve used to-date, and is Fanatec’s best.