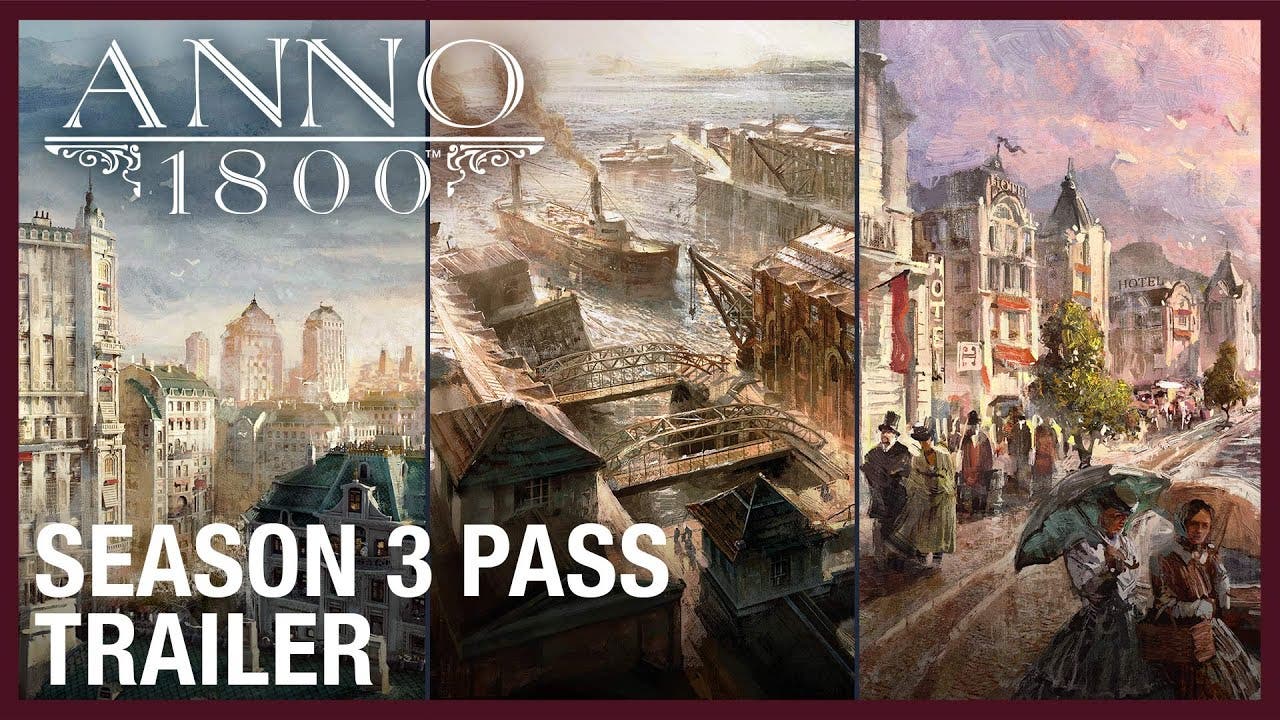 SAN FRANCISCO — February 9, 2021 — Today, Ubisoft announced that Anno 1800™, is releasing a Season 3 Pass composed of three DLCs, “Docklands,” “Tourist Season,” “The High Life,” as well as three exclusive ornaments. The Season 3 Pass will invite players to discover harbour trades, tourism, and manage big city-building heights. Players will experience a new way of exporting and promoting their cities thanks to modular warehouse district, tour busses, and skyscrapers. The new season follows two successful years, which saw 1.7 million players around the globe at the end of 2020.

“Docklands” is the first DLC from Season 3, releasing on February 23, 2021. Anno fans will transform their city by building a modular warehouse district, starting with the main building, which is inspired by the world-famous “Speicherstadt” (the world’s largest warehouse district and an UNESCO World Heritage site in Hamburg, Germany). Docklands will also provide Anno 1800 with a new way of trading, allowing players to export rare goods and reinforce their economy. Alongside Captain Tobias Morris, who will be the link between the players and companies all over the world, players are given the possibility to encounter interesting exports and become a market leader.

Season 3 Pass will also introduce players to the tourism industry through “Tourist Season,” scheduled for spring 2021. Players, among others, will keep visitors entertained with enriching activities and delicious dishes from their best restaurants, while also setting up a tour bus network in their cities. “The High Life,” on the other hand, will teach Anno adepts how to manage a big city full of skyscrapers, and how to satisfy demanding citizens with new commercial goods and malls in Summer 2021. This will permit players to customize their Anno 1800’s Old World session with brand new elements, such as new monuments, a hotel, restaurants, buildings, and malls to progress their city.

There will be two Anno 1800 Year 3 Editions, available as of today:

These will be available, replacing the old editions.  In addition to the three DLCs, Anno 1800 will receive free Game Updates to accompany each DLC release, which will focus on improving the gaming experience.

Developed by Ubisoft Mainz, Anno 1800 has allowed players to evolve and gain new skills as a ruler. Players can create their cities — big or small — plan efficient logistics networks, settle new continents, send out global expeditions, and dominate their opponents by diplomacy, trade, warfare, and new tourist attractions. The Anno 1800 post-launch plan offers new adventures, challenges and tools to the players to sharpen their skills and succeed in Anno’s world. In addition to the Season Pass 3 content, regular updates are bringing new free content to all players.

Since its creation, Anno 1800 has been dedicated to incorporating the Anno community into its thinking process.  Players have been solicited to take part in the creation and the development of the game by giving feedback through the Anno Union. Once again, players will be requested to decide on what cosmetic DLC they want. This collaboration between players and the studio is integral to the development team to create the best fitted game for its fans. Providing Anno community with the most customized and pleasant game possible, satisfying both players who enjoy the strategic aspect of Anno and those keener on the beauty aspect, is an important task for Anno team.