Chivalry 2 will offer pre-order incentives across the standard and special editions. The standard edition pre-order of Chivalry 2, available for both digital and retail, will grant players the Royal Zweihänder weapon skin.

The Special Edition, offered for digital pre-order only, comes with a bevy of additional exclusive items including the full Chivalry 2 game, the Agatha Jousting Knight Armor and Royal Broadsword, the Mason Jousting Knight Armor, the Gold Horseman’s Axe, the Roses novelty item, and more. All digital pre-orders of either the standard or special edition will guarantee access to the upcoming closed beta. Please visit the official website for additional pre-order information. 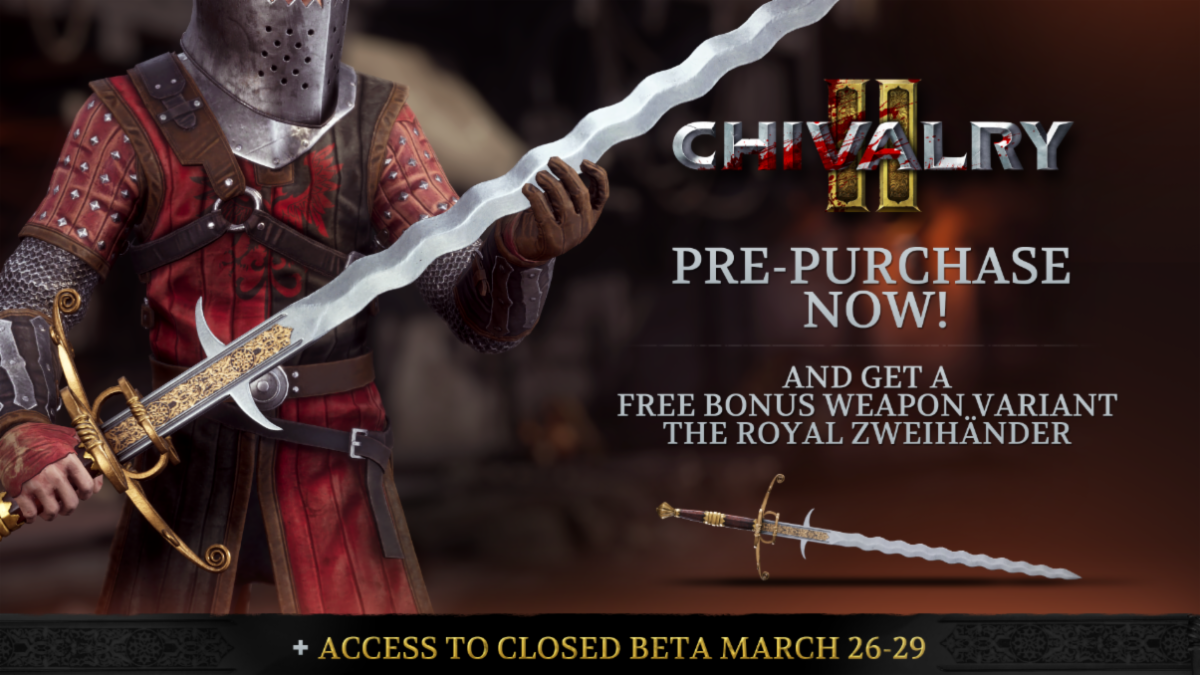 “Our dev team has been firing on all cylinders to create the best medieval combat game imaginable,” said Torn Banner Founder, Steve Piggott. “Chivalry 2 is going to be everything fans of the first title dreamed of and so much more – from a combat system rebuilt from the ground up, to massive upgrades in scale and visuals.”

“We continue to be impressed with the craftsmanship and creativity from our partners at Torn Banner Studios,” said John Gibson, CEO and Co-owner at publisher Tripwire Interactive. “They’ve crafted something very special with Chivalry 2, building the groundwork for a game that will allow players to experience epic medieval battles across all five major gaming platforms for years to come.”

Scheduled to begin on March 26 and running through March 29 for PC (via Epic Games Store) PlayStation®4, PlayStation®5, Xbox One, and Xbox Series X/S Console Systems, the Chivalry 2 Cross-Play Closed Beta event will offer fans the chance to experience the ultimate medieval battlefield ahead of its global multiplatform June 8 launch.

For more from developer Torn Banner Studios on what a “True Sequel” means for the genre-defining first-person medieval slasher and a closer look at the next era of melee combat, be sure to visit our press kit to watch the full extended cut of the first installment of the Chivalry 2 Developer Diary series from the recent Epic Games Showcase.

Additional details on what players can expect from the upcoming Chivalry 2 Cross-Play Closed Beta event include:

Chivalry 2 will be released for PC exclusively on the Epic Games Stor and through selected online retailers via Publisher Iceberg Interactive.