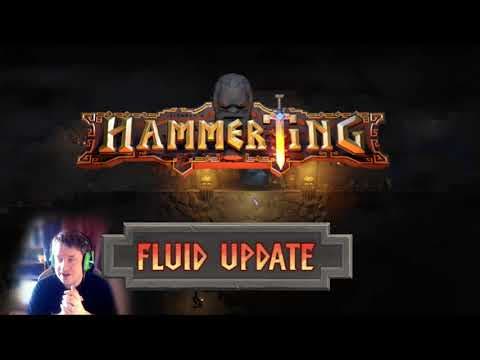 Monday, 1st March 2021 – Team17 and Warpzone Studios have today announced the launch of the Fluid Update for Hammerting, the dwarven mining sim game that launched into Early Access on Steam and Epic Game Store last year. Set in the dwarven stronghold deep under the Mountains of Mara, Hammerting tasks players with exploring, building, crafting, and mining as they develop the ultimate dwarven base and send valuable resources, weapons, and supplies to the Overworld to aid in the fight against the evil that rages high above.

The Fluid Update for Hammerting brings a treasure trove of new content to the mysterious Mountains of Mara. With the addition of fluids, dwarves will find water and lava spawning in biomes throughout the game, which can be harnessed to further the dwarves’ cause – or end in death if players aren’t careful. New tavern and drink recipes, ingredients, and knowledges are now available, along with the addition of job priorities and dwarf sovereignty, meaning players will need to improve various knowledges to be able to recruit certain dwarves. Performance improvements and bug and crash fixes are also included in the update, helping to improve the Hammerting experience for both new and current players.

Full patch notes for Hammerting’s Fluid Update are now available. To keep up to date with all the information on Hammerting please like us on Facebook, follow us on Twitter and join us on Discord.