Taxi Chaos has aspirations to be something far grander than it ever achieves. It lacks a personality of its own, a reason to keep coming back to its flat city, and really anything memorable. This is simply a pale imitation of Crazy Taxi, and just doesn't do anything new or inventive for the genre in the 20 years since that game debuted. Taxi Chaos isn't a spiritual successor, it's a mundane offspring.

It’s kind of weird that in 2021 we get a game like Taxi Chaos, where rideshare companies exist and this could’ve been something new and exciting for the genre, such as picking up multiple passengers for different drop-offs. Instead, we get a game that’s trying to be the next Crazy Taxi – yet it fails to do so in any meaningful way. It’s a vibrant, yet soulless and disappointing at recreating the magic that game once had over twenty years ago. Taxi Chaos is hardly ever chaotic, in fact it’s rather orderly. All I want is to go play Crazy Taxi, and that says all you really need to know. 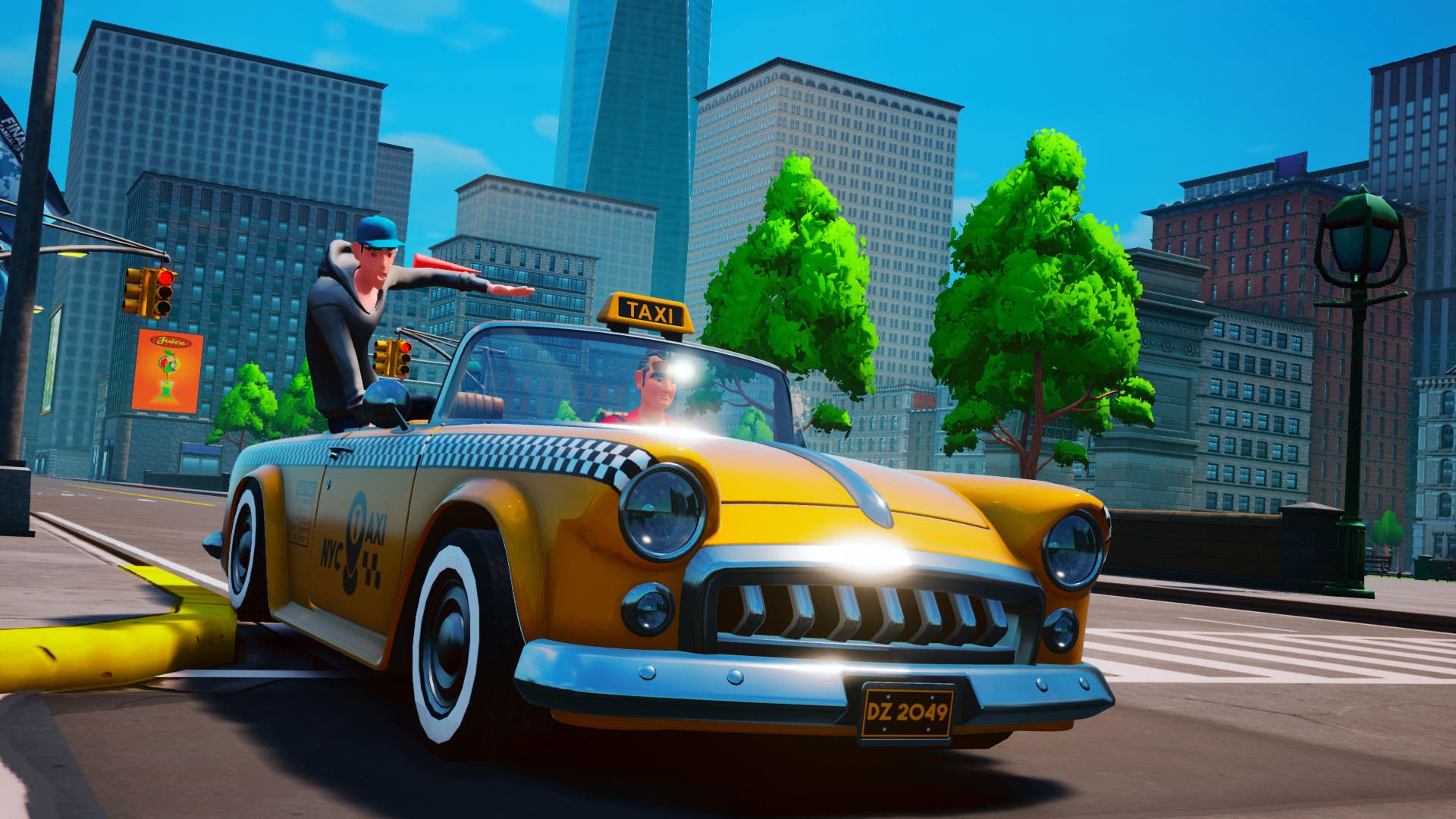 From the start, the game’s menu is uninteresting and a poor user experience with sideways text for menu options and font choice. No matter the mode you choose, you’re given the choice of selecting either Vinny or Cleo. Unlike Crazy Taxi, the drivers are detached from their vehicles, which is nice. The drivers are characters in their own right, but they’re dated and flat representations of an aged driver and an up-and-coming influencer, respectively. The gameplay loop is exactly that of Crazy Taxi‘s. You’ll pick up passengers and take them to their destination in the shortest amount of time possible. Doing so will net you bonus cash, and allow you to get bonus time as you take your next fare. You can get to your next drop-off faster by holding brake and gas together to charge a boost. Now, you only get sixty seconds to do it all, so chaining fares in a way that keeps things going is the right way to play it.

The act of driving and navigating the city is straightforward. You’ll be driving passengers all over NYC, yes that’s right: New Yellow City. Effectively a stand-in for New York City, New Yellow City is just a rectangular box with no real creative design. The thing that sets this game apart from the aforementioned game is that there’s a jump button. It’s a fine addition, because it adds verticality to a city that’s otherwise devoid of it due to the developers chose to copy New York City, and not San Francisco (which is rife with hills for natural jumps). So the devoted jump button will let you jump over select buildings, with some hand-crafted paths serving as shortcuts that wouldn’t normally be there. Since you can jump at any time, and jumping increases your combo, you can cheaply boost your score at the expense of speed and time, but the tip will be nice by the time you drop them off. It’s a neat mechanic that has its limitations, but I couldn’t imagine the game without it. 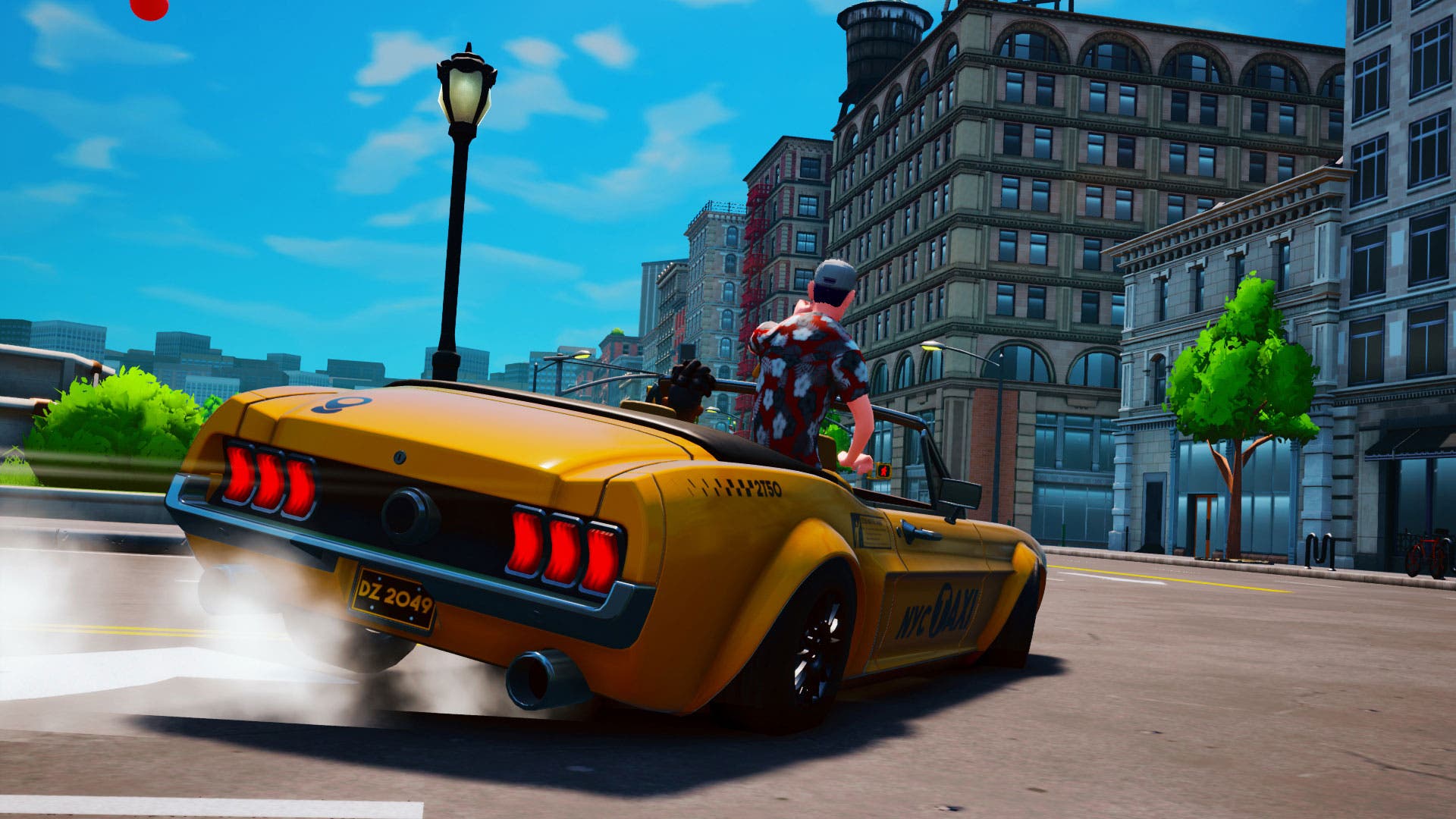 There are three modes to the game: Arcade, Pro, and Free Roam. Arcade mode is the standard mode, where you’ll be given sixty seconds to drop-off as many passengers as possible with your selected vehicle. Pro mode is for those who have mastered the arcade mode, and memorized the city. Because in Pro mode, you’re not given any direction on where to go, only the destination. There’s some “Veteran New York Cabbie” vibes from this mode I appreciate, and it certainly rewards those who spend a lot of time with the game. However, there’s so little to keep you invested that I foresee this mode being the least played, if at all. Free Roam imposes no time limit, and lets you move about the city as you wish. You can even still pick up passengers if you want, but the main goal here is to find all the game’s collectibles with ease. Arcade mode is where most will spend their time, and is the most like the Crazy Taxi experience those are craving.

With seven cars in total for you to use in the game, each with their own unique handling, speed, boost, and other characteristics. All except one car will be locked at the start, and you’ll be given their unlock conditions when you hover over them. Things like Play 20 Missions in Arcade Mode, Get a Star Rating of 4 in Pro Mode, Drop-off 300 Customers in Any Mode, and Drive 200 Miles in Any Mode are a few. The game does nothing to track your gameplay statistics within the game, and so you can only rely on trophy progression as some sort of metric of your progress. It doesn’t take long to unlock these, save for the hardcore pro mode, but a proper stats page would have gone a long way. Among the unlockable cars are a muscle, supercar, tuner, and more. As you learn more about your driving style, the unlocked cars will become an extension of you. Until then, you’ll have to deal with the sluggish vehicles of the first few hours. 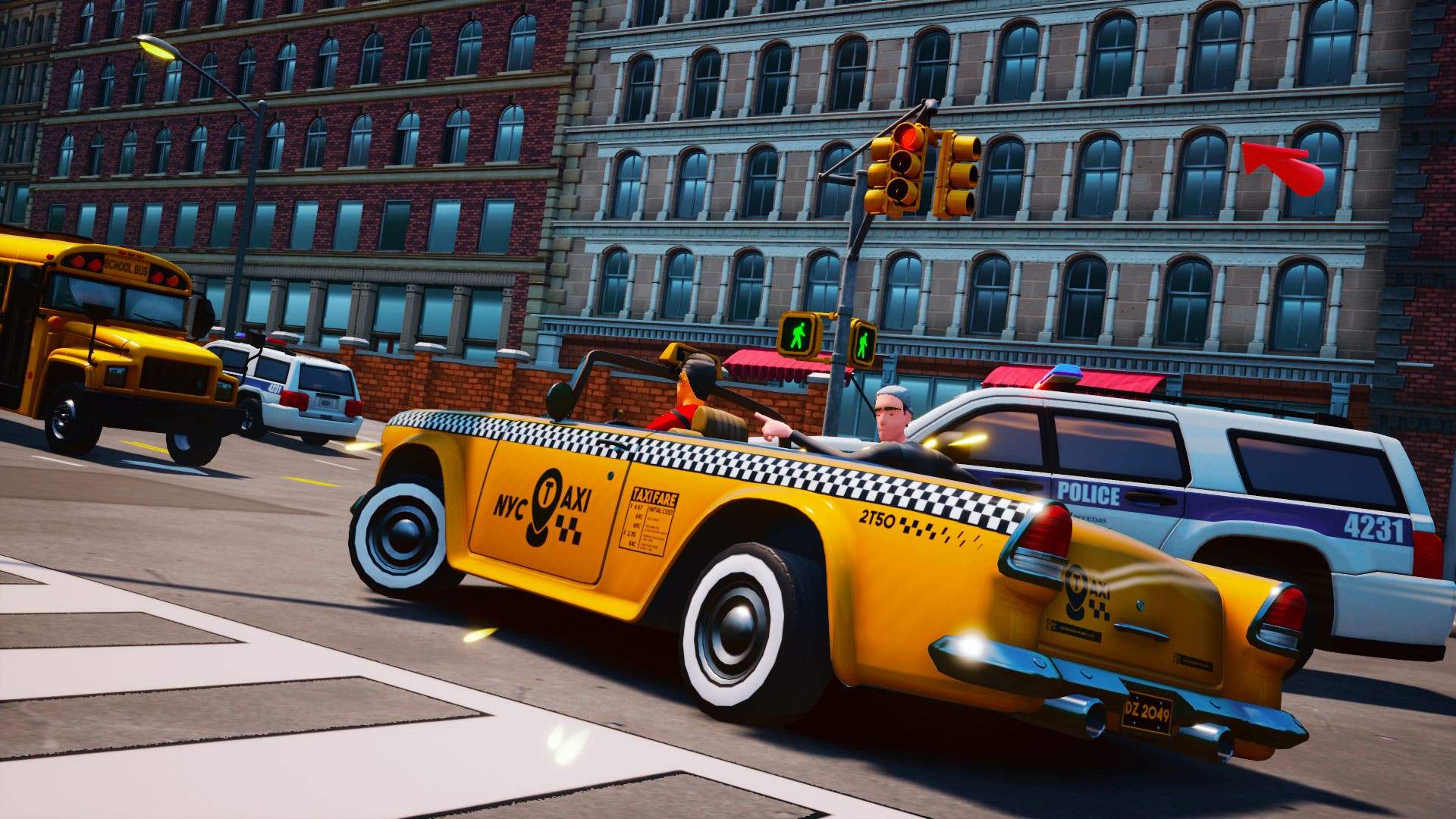 Taxi Chaos attempts to create a connection between the driver and passengers through limited conversation with each fare. What you learn is that there’s repetitive archetypes like the hoity-toity businessmen that doesn’t have time to talk because they’ve got calls to take, tourists wanting to learn the best spots, fashionistas and the like. It’s something different, but I would have much preferred if none of this took place. The voice acting is stilted, and everyone sounds like they’re from the Midwest, and not from the east coast. I will say that while these interactions happen often, you tend to know their destinations and can get the jump on it, but not at the expense of hearing these dreadful conversations over and over.

To say that Taxi Chaos has a generic soundtrack is an understatement. There might as well be a tool tip that says: “Go find the Crazy Taxi soundtrack on Spotify or Apple Music”, because there’s nothing redeeming in the default soundtrack, and I eventually turned it off, alongside the voices. This makes this a very quiet game. I love the colorful and vibrant visuals of the game, there’s a Planet Coaster aesthetic to the character and world design, it’s very fun and approachable. This is a PlayStation 4 release, but was fully playable on my PlayStation 5 without any enhancements for the console itself. The game ran at a stable 30fps, though it had lots of aliasing and pop-in. It’s not the most impressive looking game, but has great style. 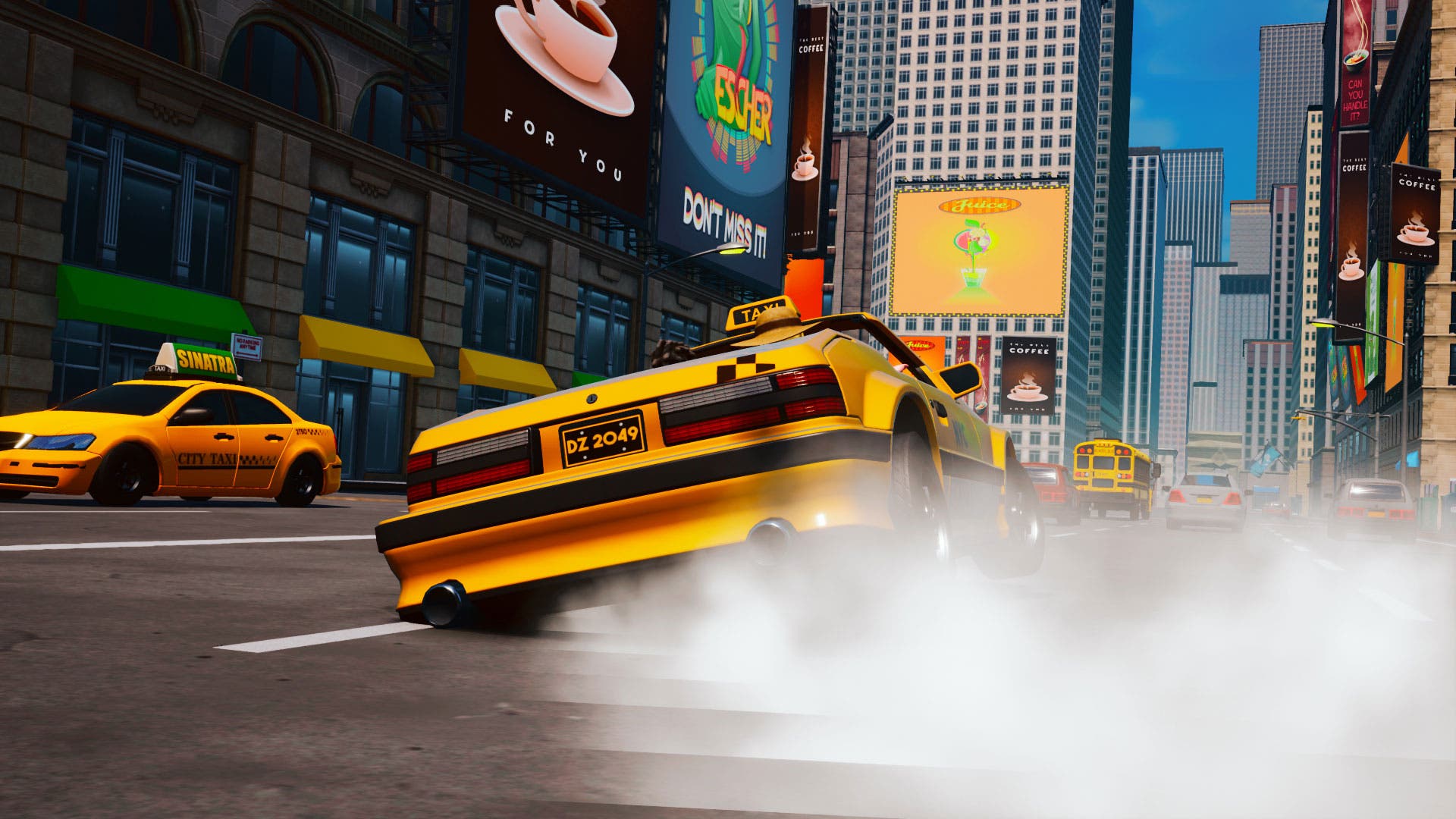 Taxi Chaos has aspirations to be something far grander than it ever achieves. It lacks a personality of its own, a reason to keep coming back to its flat city, and really anything memorable. This is simply a pale imitation of Crazy Taxi, and just doesn’t do anything new or inventive for the genre in the 20 years since that game debuted. Taxi Chaos isn’t a spiritual successor, it’s a mundane offspring.