As someone who’s reviewed every incarnation of Aqua Kitty there has been, the unique blend of Defender and Gradius has been so joyous to experience time and time again. When I heard Astro Aqua Kitty was dropping the arcade aspect and adding RPG mechanics like multiple characters, experience points, quests, and loot – it was exactly the follow-up I didn’t know I wanted. This is a game that will have you hooked for at least a dozen hours, per character. Tikipod does it again; with its irresistible charm, gorgeous visuals, and effortless gameplay, Astro Aqua Kitty is the cat’s meow. 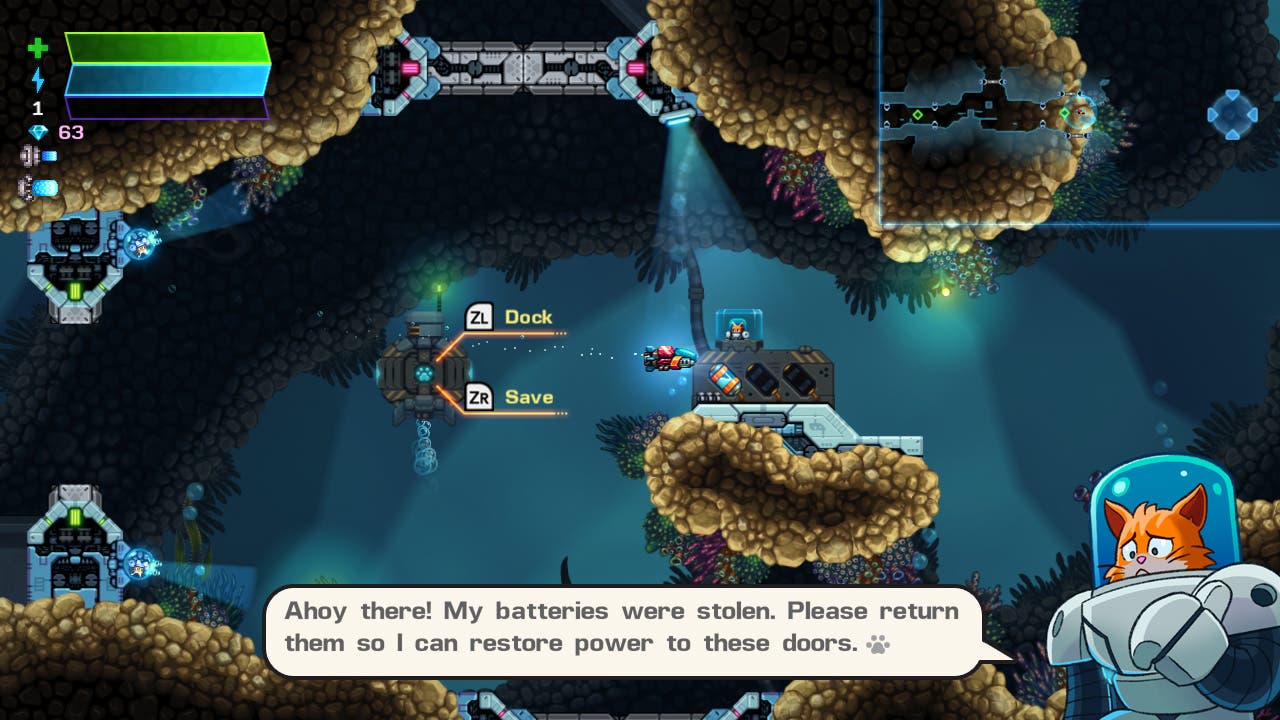 The cats of Aqua Kitty have expanded into space. With a new threat such as pirate rabbits, they face their greatest challenge yet. Now as luck would have it, they must make their way through asteroids coincidentally filled with water much like the planet where they were mining for milk from. It’s one hell of a coincidence, but being down-to-Earth is not what the series is known for. The game follow’s a linear progression through its eight asteroids, with unique quests and challenges for each. The presentation feels grander, maybe its the larger playable areas and a proper progression system, but it’s great.

Upon starting the game, you have some choices ahead of you. You’ll first have to choose essentially a character class to play as, with an engineer with unique abilities to help you. There are four pilots to pick from, each with their own attributes and different skills to offer. The same goes for the four engineers as well. There’s a lot of opportunity to mix ‘n’ match the pilots and engineers for lots of combinations. Then you can pick the difficulty of your choosing, as well as making the game a normal game (where deaths mean returning to your last save), or permadeth (when you die, you must start over from the beginning). Or, you can leave it all to chance and press the randomize button to have the game pick everything for you. There’s lots of possibilities here, and an emphasis on replayability without the reliance on the prior game’s arcade-style presentation. 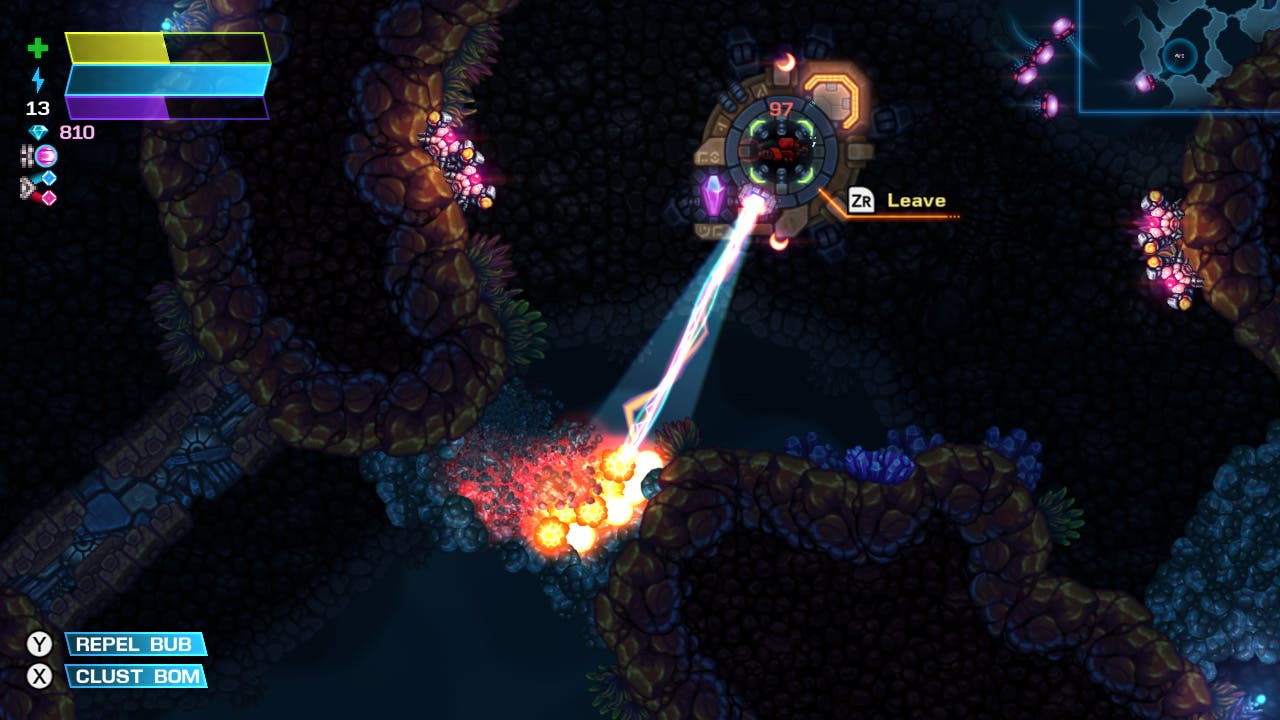 Everything you kill or destroy nets you XP. There are eight levels on eight different asteroids to play on, with large explorable areas that probably equal every level in Aqua Kitty combined. It’s a simple RPG system, but it works well. You earn levels by filling the XP bar, and are able to spend points on skills and enhance your core systems. The game doesn’t really let you grind for experience. In most cases, enemies will not respawn. There’s a select few areas and later levels in the campaign where more enemies will sporadically re-enter the area, but that’s few and far between. This means there’s essentially a finite amount of experience to gain, as to not make you overpowered for the levels that come after. It feels so smartly designed.

The aforementioned skills let you purchase active or passive abilities. I opted mainly for passive abilities, so I wouldn’t have to think about them (or subsequently forget about them). For each level, it increases the maximum health, armor, and energy you can have. There’s a limited inventory that lets you hold items in your cargo. Weapons and devices take up a slot in your cargo whether active or not. You can swap items at any time, but to purchase anything new, you must visit a save point which will have a shop available to buy from. Any old or obsolete items can be dismantled for gems, the game’s currency. The loot drops at a steady pace, and every upgrade feels meaningful.

The controls are responsive, and simple to pick-up and learn. You can rotate your personal submarine left and right with a single button press, and shooting is just two-buttons. It’s all very intuitive. If you’re familiar with the Aqua Kitty games, you’ll be right at home here. The game takes into account that the engines are in the back, so if you are moving the same direction you are propelling yourself, you go faster. If you are moving opposite, you’ll move slower until you rotate the ship. Just clever little touches that persist throughout the game really brings things together.

Like Princess Leia says in Empire Strikes Back, “We’re going to get pulverized if we stay out here much longer.” There will be times you get swarmed by enemies, or encounter new ones that will rip you apart like a tin can. These tougher enemies will send you back to your last save on death. The generous save points around any given later lend themselves to be cheesed by you. Since most enemies die permanently, you can pick a few off, retreat, save and heal at these stations, then return to clean up what’s left. It’s an effective strategy in getting through the tougher parts of the game until the XP accumulates to get you to that next level. 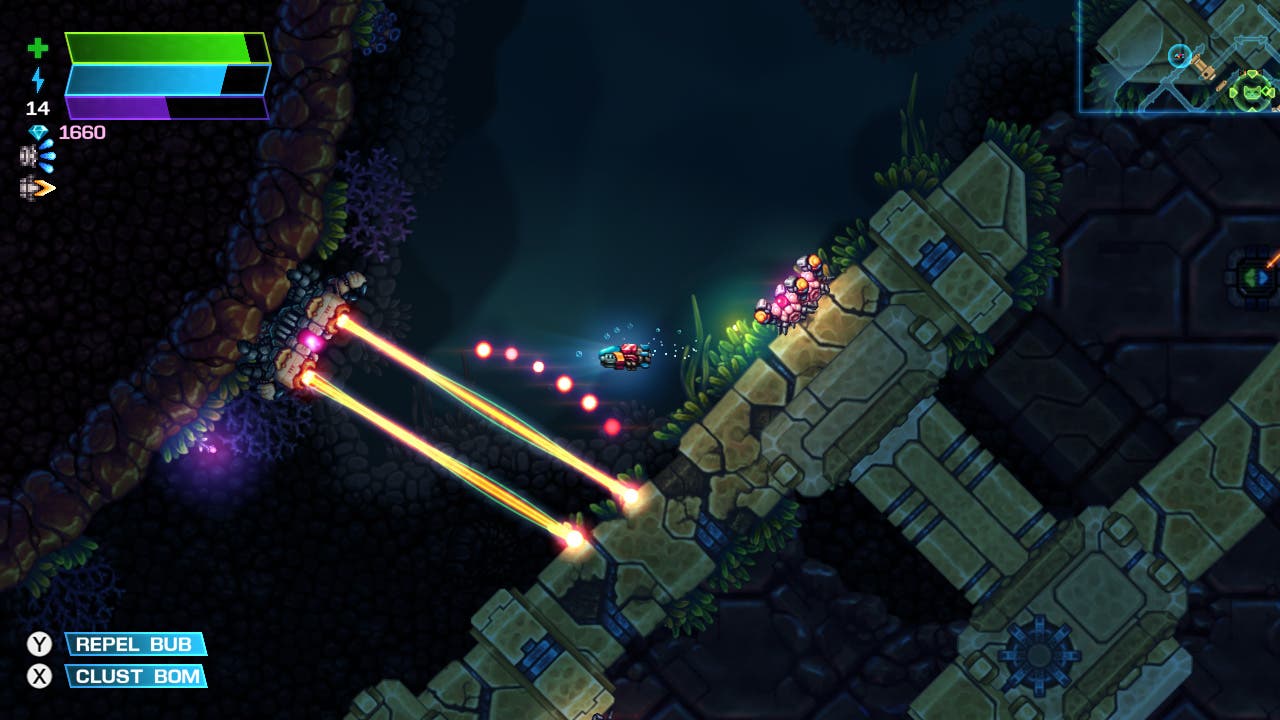 Astro Aqua Kitty‘s levels are gorgeous, even for just being water-filled asteroids. These big, cavernous areas are just begging to be explored. There’s really no secrets to be found, but there will be lots of gems to unearth and enemies to fight, that make it all worth it. It’s a great combination of familiar yet unknown territory.

There’s lots of replayability in the game, whether it be from mixing and matching the various pilots and engineers to the levels themselves. It’s a near-infinite number of possibilities and combinations that make the game stand out from the rest. This is also a game I feel encouraged to experiment with new weapons and abilities, and starting over doesn’t feel like a consequence, but its own reward.

All of the systems around Aqua Kitty have been improved and expanded upon in meaningful ways to make Astro Aqua Kitty be so memorable. From simple things like earning experience to picking your next upgrade, there’s a progression that keeps you invested in your character. The quest system is handled elegantly, dynamically giving you tasks to complete and simply marking your map that keeps things from becoming unwieldy. There are a multitude of options for each playthrough at a dozen hours each time, and Astro Aqua Kitty is a game you’ll be coming back to again and again.