The collaboration between developers Agens, Room8, and publisher Snowman gives Skate City a sense of both style and substance. Originally released in late 2019 for Apple Arcade, it has finally made its way to PC and consoles. The game is no poser, as it successfully bridges a gap between arcade and realistic skateboarding games that evokes prior games, but defines itself as something wholly unique. Skate City is not a place, it’s a state of mind. 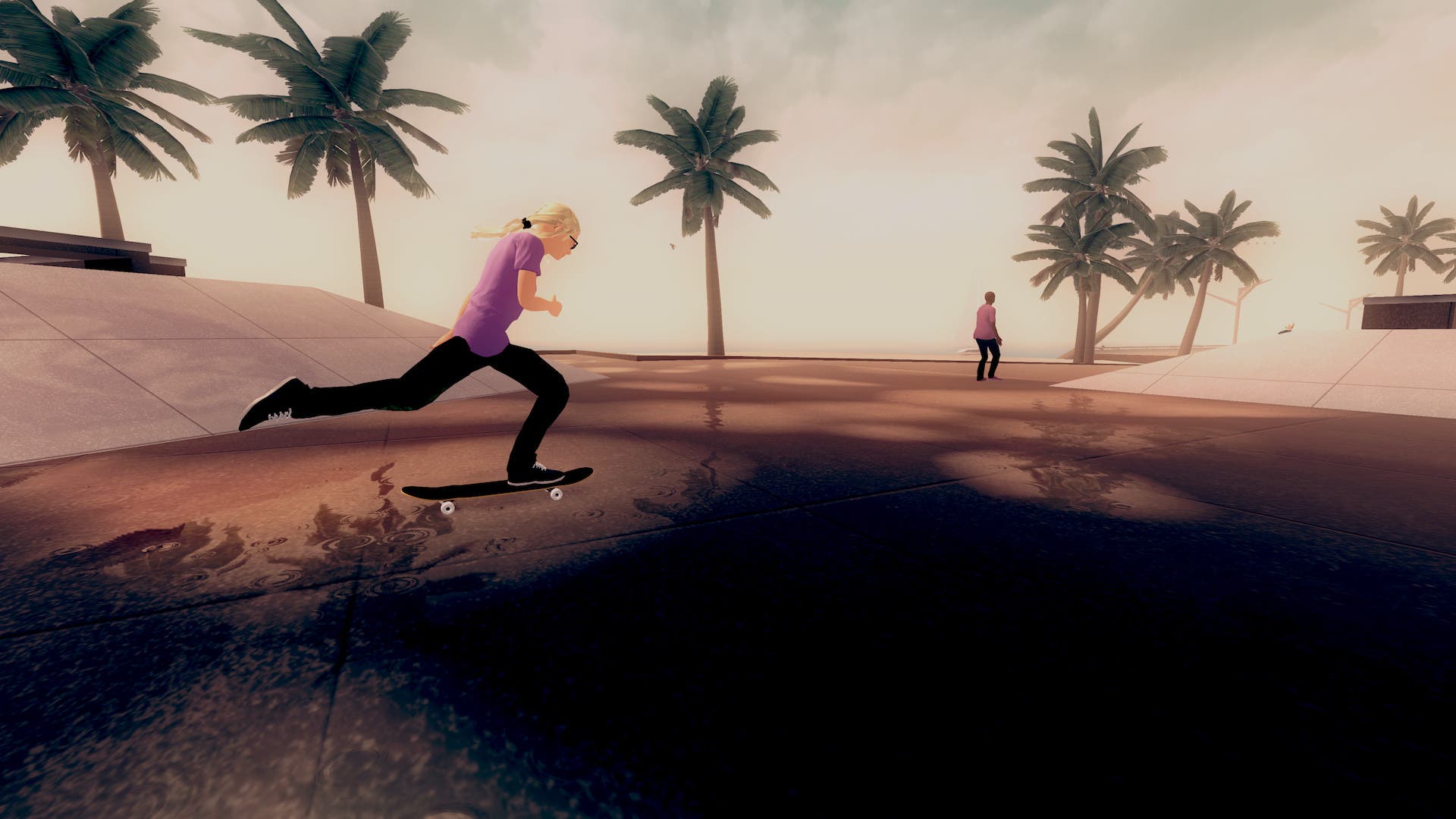 You’ll be immediately struck by the game’s visuals and sound design. From the simple polygons and soft pastels that illuminate the screen, to the game’s lo-fi beats that gently encapsulate the experience, this is the definition of aesthetic. Though this is a game that’s so much more than what you see on the surface, the systems and controls are a careful balance of available tricks, using currency to enhance skills, and the player’s own ability to improve with the game over time. I played the game with a gamepad, and it’s pretty much the only way to experience it – becoming entrancing and Zen-like.

It’ll be hard not to make comparisons to games like OlliOlli because it’s a 2.5D skateboarding game, and skate. because it uses the thumbsticks for executing tricks. This is a game all its own, even if it does resemble something else from time to time. That said, the controls are intuitive yet initially awkward if you’ve got the aforementioned games programmed into your muscle memory. It doesn’t take long to override those impulses, but this does lead to some minor frustrations early on. Many times, Skate City will display the inputs on any given challenge for not only memorization help but I think the developer’s own innate understanding to break the habits formed by other games. 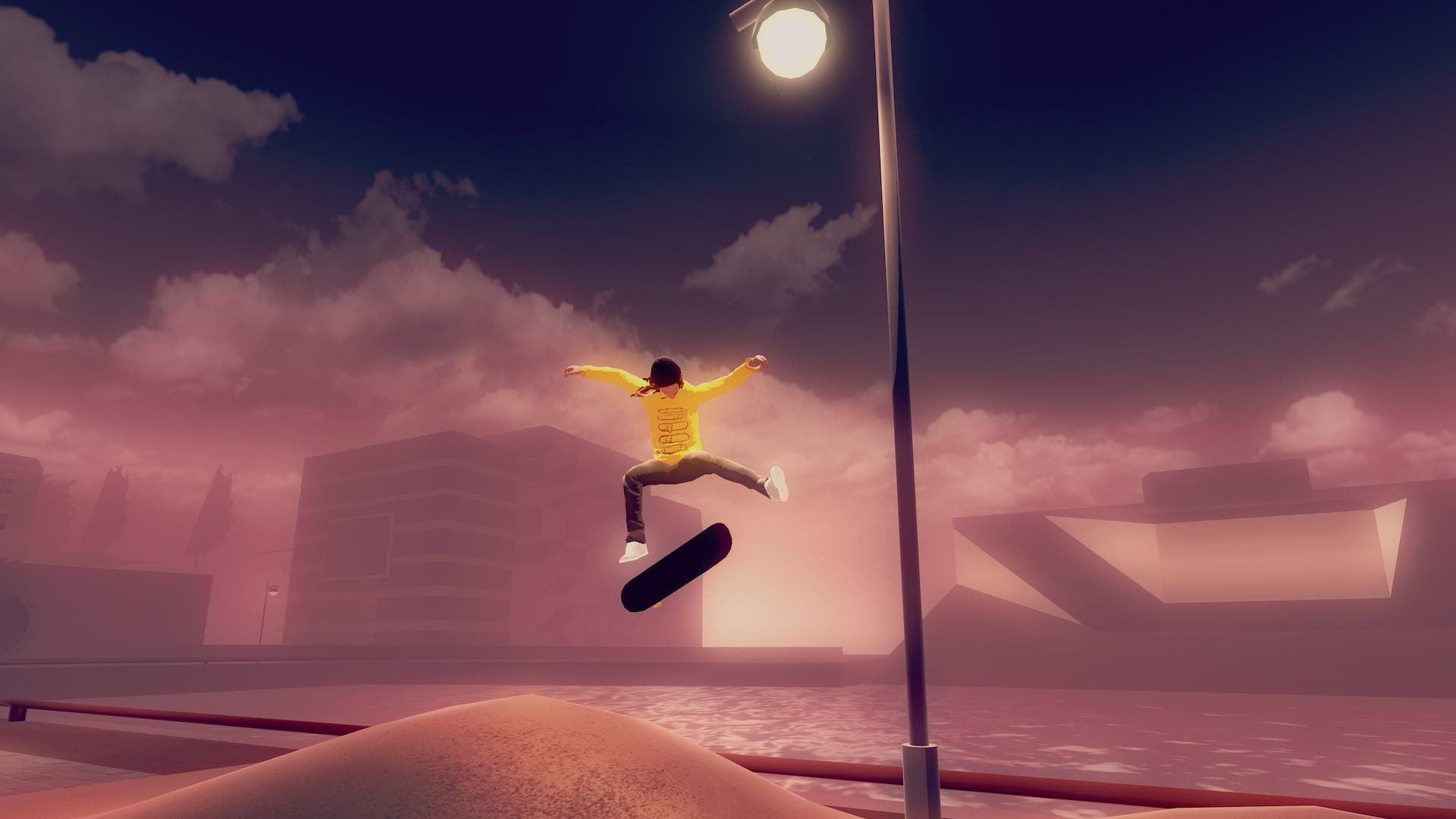 Aside from just choosing ‘SKATE’ from the main menu, the first thing presented to you is Endless Skate. A perfect way to jump into the game without any pressure or demand, and just learn the game. Endless Skate mode does naturally recall something like Alto’s Odyssey (which is also published by Snowman). In this mode you’ll loop a lengthy, randomly generated city with obstacles, jumps, gaps, and grinds to string together into long combos and go for the greatest sesh. There are goals to achieve here, but this mode is more about learning and relaxing than anything else. There are 21 challenges per city to go for. These challenges have a three-point system. For each challenge tier attained, a star is awarded along with a currency payout. It’s a simple yet rewarding system that will keep you coming back to perfect them all.

At first you only have access to Los Angeles at first. Then when you have enough currency to spend, you can choose between Oslo and Barcelona. Each location has its own goals in endless skate, as well as unique challenges to conquer. The challenges in each city ramp up appropriately. You don’t start in a new city and pick-up with the level of difficulty that the prior city left off with, but it does seem to expect a bit more out of you sooner when compared to Los Angeles. This is also the type of game where you spend a lot of time in one location before moving on. Now, on Apple Arcade a new location was added: Miami. I’m assuming that because I haven’t completed all of the challenges in Barcelona, that I haven’t unlocked it, but I don’t even see it as selectable, so it must be hidden until then. A curious choice, but it looks to be the best city inclusion of all, especially at night. 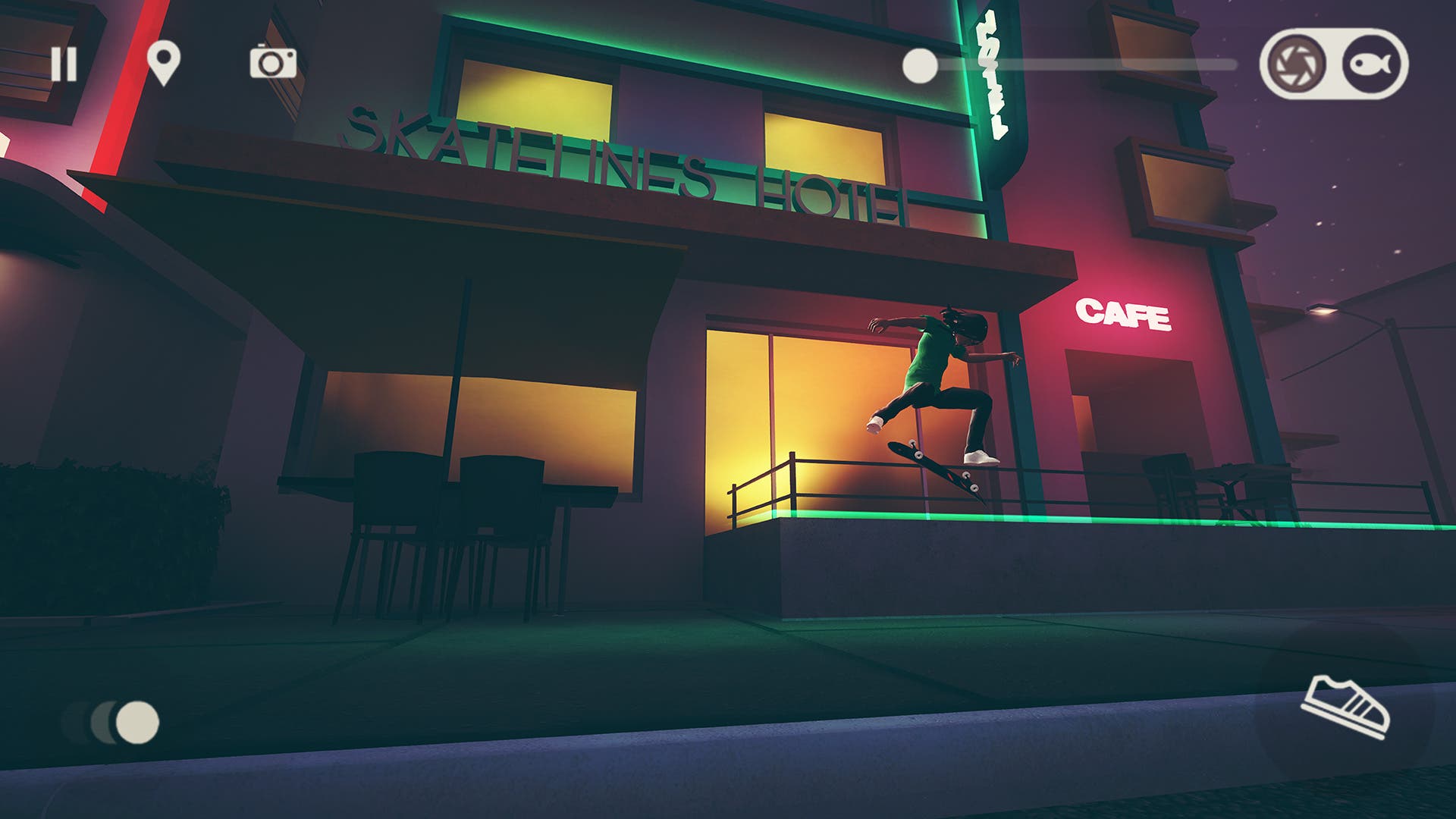 There’s multiple ways to use the currency earned through in-game play. You can unlock cities with it, as well as purchase cosmetic items like shoes, trucks, wheels, decks, and sunglasses to name a few. The actual character customization is pretty bare bones, and there’s not many options for really anyone to find something that’s close to a one-to-one representation of themselves. You’ll settle on something, and likely ignore it from that point forward.

Now, it took me far too long to discover this, but the skate shop is also where you can buy special tricks and upgrade your skills. In retrospect, it was really obvious, but it kind of blended into the scene in a way that my eyes weren’t drawn to those menu elements. It’s here where you can purchase special tricks like the benihana, airwalk, and impossible to name a few. It’s very apparent when you upgrade skills like speed, spin, and pop. This dramatically changes the game for the better, and returning to prior levels that you did not get all three stars on become cakewalks. 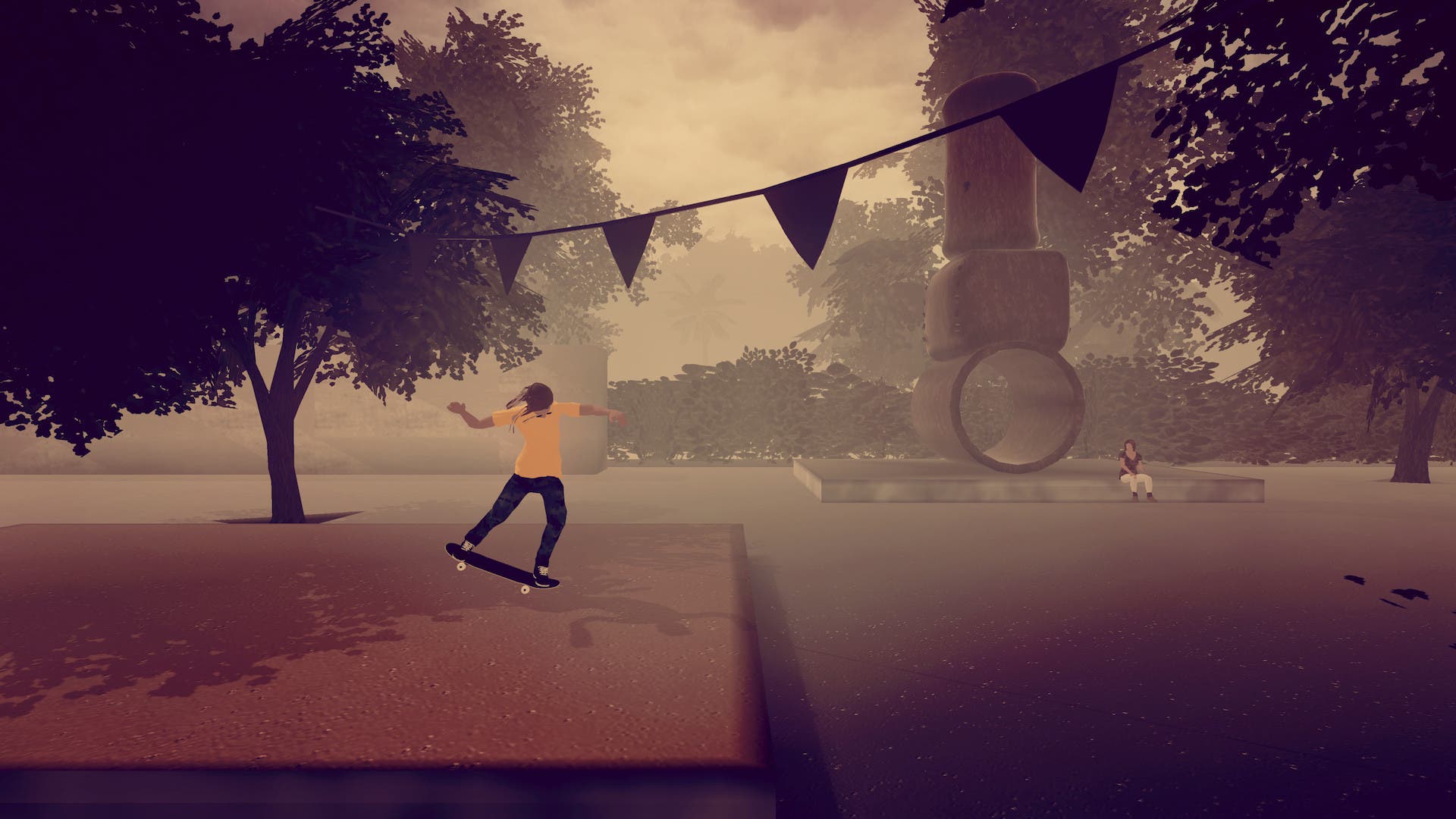 The game only has a couple of problems worth mentioning. The first is that I found myself having to restart the game because it would inexplicably freeze. Even using the latest Windows Updates and most recent graphics drivers, it just would hang and result in me having to kill the game. An investigation into the event viewer did not give any details as to what it was. While this would happen seldomly, it would just go away on its own. The other issue is that while the game plays really well, and looks fantastic, any options I would change in the setting like increasing the refresh rate or turning off VSync would fail to save. Or at least, there was no button I could press to make it save my changes. A weird omission to say the least.

Skate City takes something like photo mode and elevates it. While you could use the in-game recording tools for photos, that only tells half the story. Skateboarding’s popularity has been shared through video, and the game allows you to do that. Now while performing runs, you can record your gameplay, zoom in and out dramatically, rotate the camera, or slow down at the right moment to showcase the game’s beautiful animations. It works well, and is incredibly easy to save and share your makings.

This is a game meant to be played in short sessions, and maybe that’s where its mobile roots show, but it’s far from shallow. Skate City is a low stakes game. Over time, the in-game challenges and goals it asks you to perform become more demanding, but that’s only part of it. There’s an overwhelming sense of chill as the lo-fi beats kick in and the quiet atmosphere goes rolling by. Like Stevie Williams said about skateboarding, Skate City is poetry of motion.