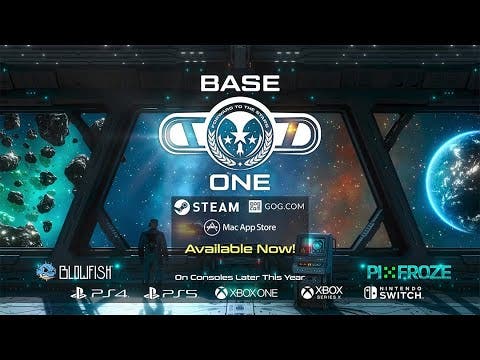 Base One, a Space Colony Management Sim releases onto PC via Steam and GOG today

SYDNEY – May 11, 2021 – Base One, the space station simulator with hardcore survival and RPG mechanics from publisher Blowfish Studios and developer PixFroze, arrives today on PC and Mac. Nintendo Switch, PlayStation 5, PlayStation 4, Xbox Series X|S and Xbox One versions are also in development and planned for release later this year.

Settle in among the stars and build new colonies by constructing modular space stations and managing power consumption, oxygen, and heat to keep crew members alive and well as they explore the final frontier. Scour star systems for valuable resources, forgotten satellites, and life signs to unlock new technologies and upgrades to keep the vessels in good working order.

Advance through a story-driven campaign that analyzes the impact of interstellar colonization in a reality where corporate interests guide the hand of scientific advancement. Navigate through challenging scenarios that test a crews’ survival skills by completing objectives and modifying stations to establish a human presence in otherwise uncharted regions of space.

Base One’s modular building system features a wide array of helpful technology and resources, allowing for on-the-fly station upgrades with an intuitive interface. Attach solar panels to a station’s exterior, construct a docking bay, furnish the astronauts’ living quarters, and assemble a launching system to deploy probes into the void in search of valuable information.

Keep the station running smoothly by ensuring that each module is powered and life support systems are online. Run power lines from a ship’s solar panels to a nearby battery to begin the flow of power and link it to different rooms and devices to keep the station’s interior hospitable and keep the crew alive through the campaign. Or design stations without ultimate freedom in custom game modes, where the only restraint on colonies is the builder’s imagination.

“Base One combines simulation, city-building, and light roleplaying systems to create an immersive and engaging experience about surviving in uncharted regions of space,” said Ben Lee, CEO, Blowfish Studios. “We are excited to welcome intrepid explorers and hearty astronauts to Base One with its PC and Mac launch today!”

Base One is now available on Steam for Windows PC and Mac, GOG.com, and the Mac App Store for $24.99 USD / €19.99 / £15.99 / $29.95 AUD with English voiceover alongside French, German, Spanish, Russian and Simplified Chinese text language options (with Traditional Chinese and Japanese coming soon). The PlayStation 5 and PlayStation 4 versions are available to wishlist today and will be available later in 2021 alongside the Nintendo Switch, Xbox Series X|S, and Xbox One versions.