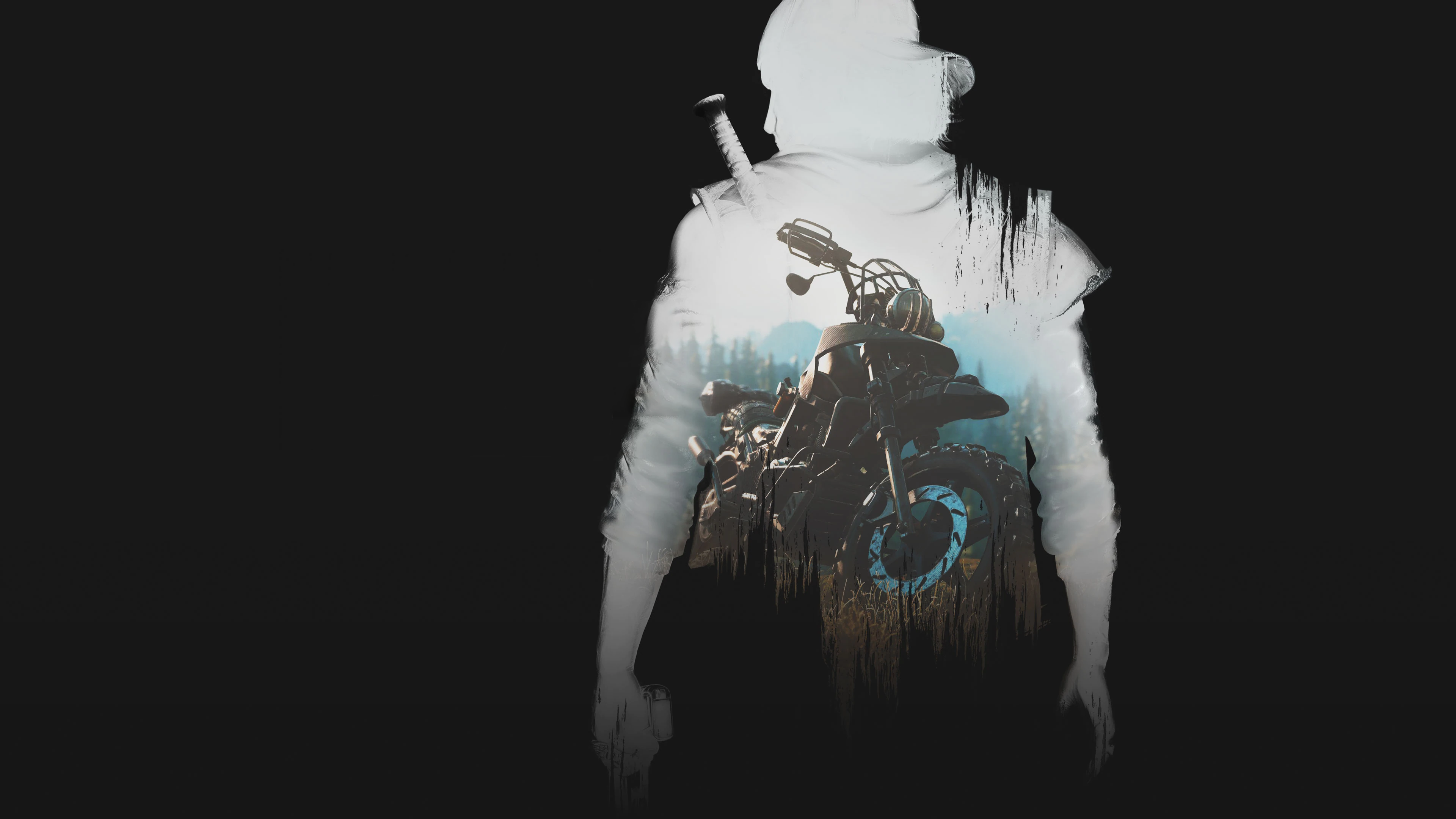 Days Gone is just small window into viewing how real people would respond to a zombie apocalypse that stemmed from a pandemic. It bears resemblance to the apocalypse found in The Last of Us, though it distinguishes itself enough to be a standout. It does however, cast a light of this game’s world like the one we find ourselves in today. Days Gone released onto PlayStation 4 back in 2019, and a performance patch would come for the PlayStation 5 in 2020 to allow the game to played in 4K at 60 frames per second. This version is similar, and nothing short of excellent. Bend Studio’s cult classic shines on PC to give more people the opportunity to enjoy the PlayStation exclusive. 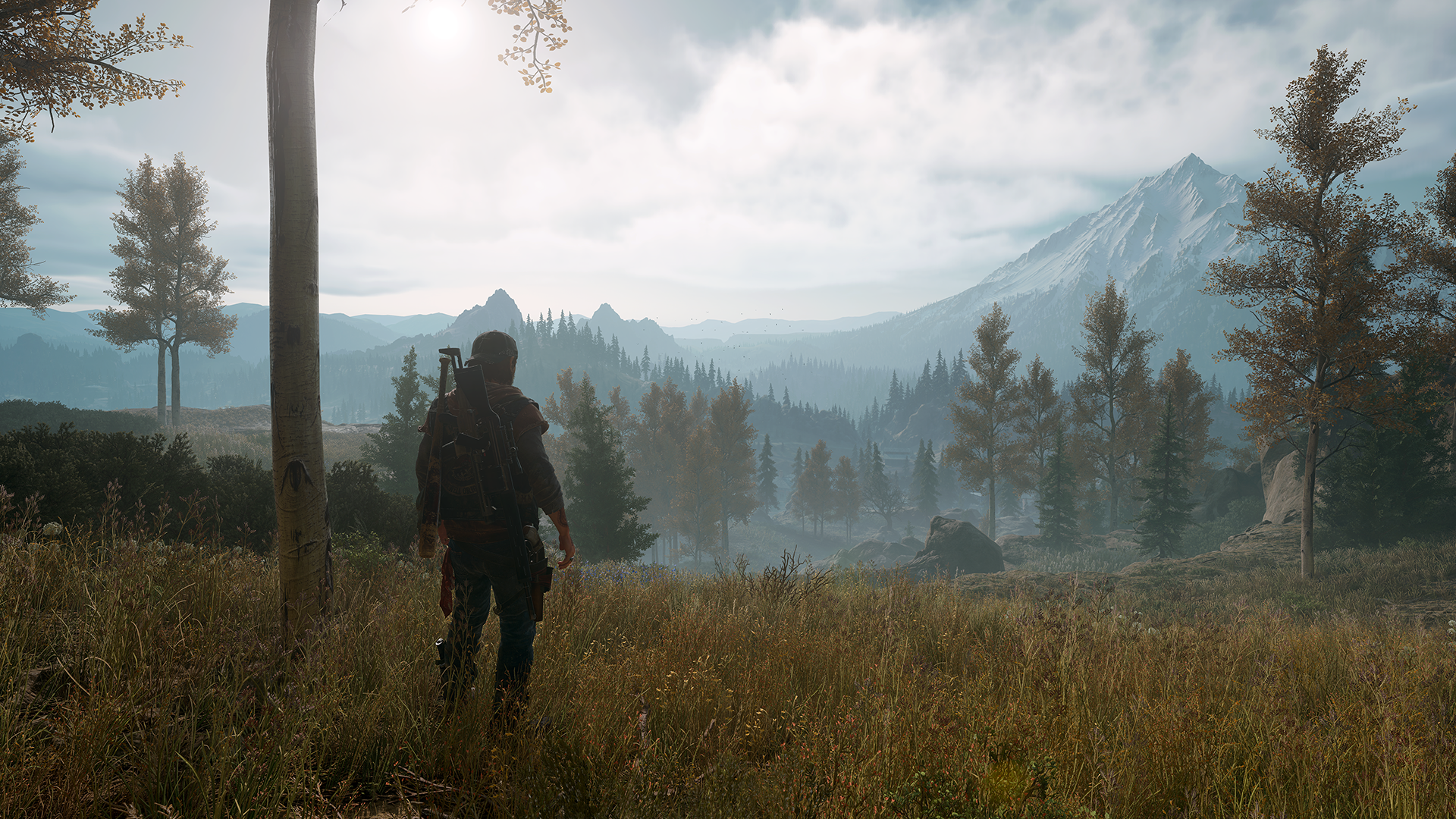 The game begins with a flashback, looking back at the separation of our protagonist Deacon St. John and his wife, having made a difficult decision to stay behind with his friend, Boozer. You’re then sprung into present day Farewell, Oregon where Deacon (played by Sam Witwer in both likeness and voice) is working with Boozer to track down a bounty. Things go from bad to worse, but it’s a solid introduction to the world and its systems. It’s interesting to focus on biker gangs as the central cast of characters you interact with, but it works, and is different from what we’re normally used to. The zombies are called Freakers, and there’s an antagonistic human cult that worship the Freakers known as Rippers – short for “Rest in Peace Cult”. Much of the game is staving off both factions, and always in combat with them while also satisfying the humans around you. True to life, you’ll manage multiple storylines as you’ll go through multiple quests until the storyline is satisfied. It’s real smart way of handling the typical mission and quest structure.

Stealth is a core component of Days Gone, as maintaining it will make yours and Deacon’s life easier. Action is always the fallback, and you’re usually able to kill anything that aggros you. There are moments where hordes will swarm the area and the only thing to do is run away. While maintaining stealth, you’re able to one-hit kill nearly any enemy the game presents you with, except for the government agents that patrol certain areas. The game can be as breezy or challenging as you’d like, with a selection of difficulties: Easy, Normal, Hard, Hard II, Survival, and Survival II – each of these can offer replayability and increased challenges. There’s an assortment of real-world weapons to find and buy in the world, categorized into primary, secondary, and special weapons. You’ll be able to repair them, improve them, and swap between them at safehouses. You can even apply temporary suppressors that will allow you for dampened noises to help rid the area without drawing full attention to yourself. On the default Normal difficulty, is where the game feels its best. 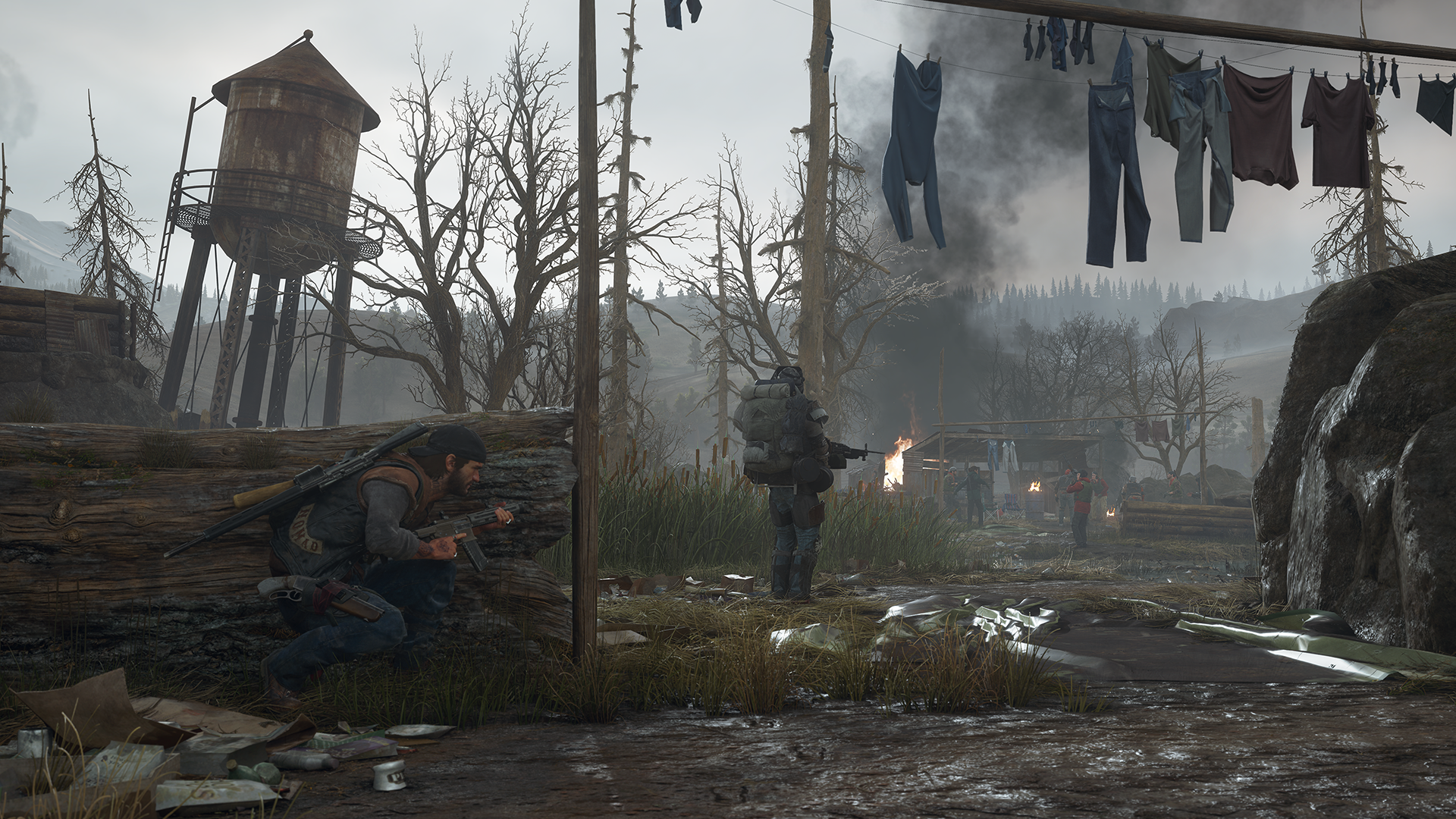 As you complete storylines, take on bounties, and do things for each of the camps you encounter, you’ll earn faction reputation. This reputation unlocks purchase options within the camp, or will get you better rewards. Some missions will task you with making a decision which camp to give the quest item to, and what rewards you’ll gain from them. Each camp has their own benefit, to includes stores, places to rest, and even a mechanic to make improvements. All camps and secured areas are available for fast travel. The missions over time get repetitive, and the story is ultimately forgettable, but this is one of those “it’s about the journey” types, and it shows.

The game will task you with things out in the open-world. There will be people in distress, and upon saving them, will let you direct them to the camp of your choosing. These people can also die if you do nothing or don’t do enough to help. Infestation nests seem daunting at first, but so long as you’re able to craft Molotov cocktails, you can clear the four to six nests there. Clearing nests seems like it’d be temporary task, but Freakers are permanently removed from the area and allows for fast travel. Deacon has survival vision, which highlights collectibles out in the world, and can be upgraded as you level up. You’ll also use it in missions to track footprints. The game has so many little details, like how Deacon audibly reminds himself and the player of an open task in the area. 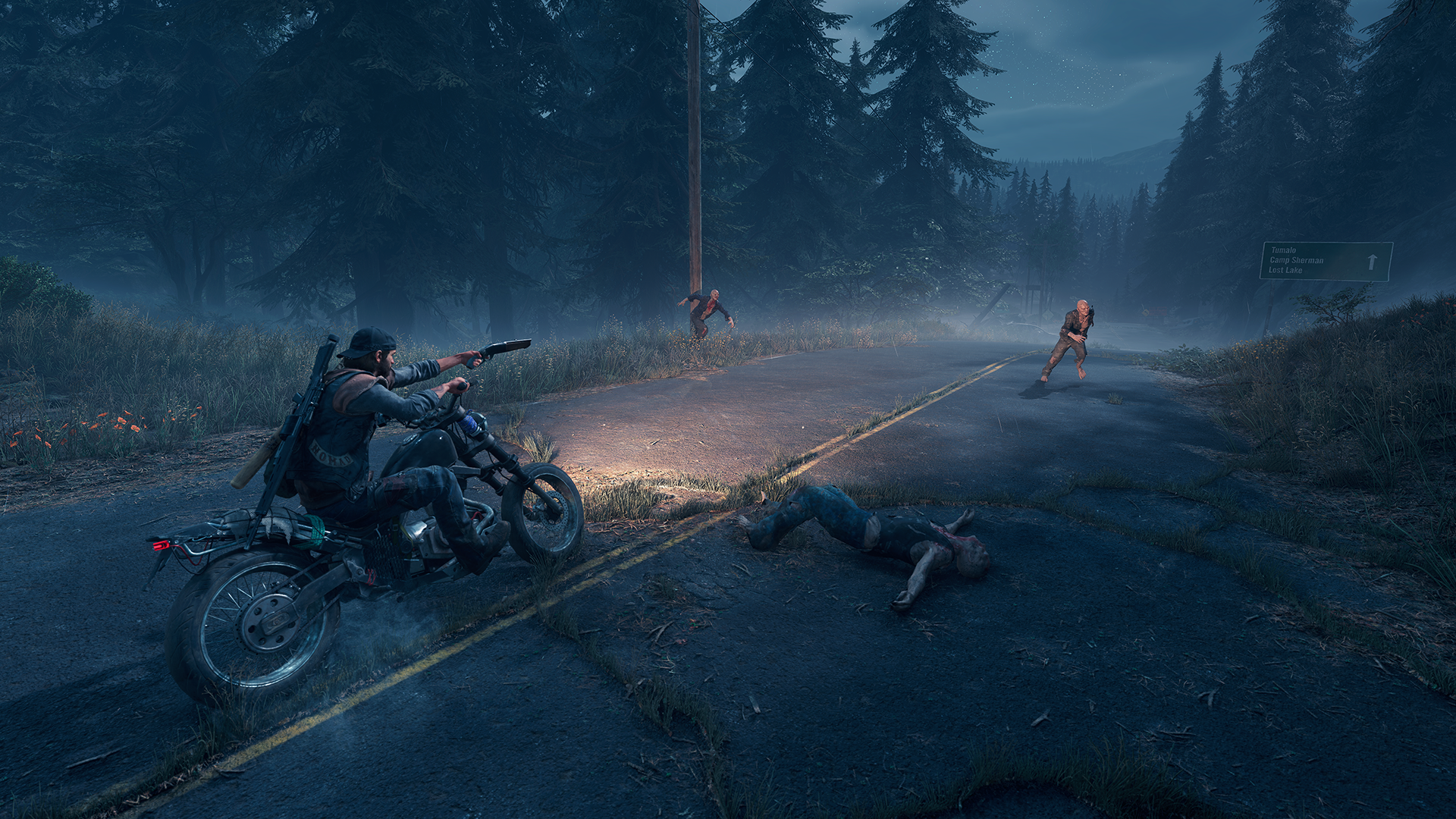 The bike in Days Gone is like the horse in other open-world games, it’s the main mode of transportation and it can be summoned at-will. This is especially helpful if you stray too far away from your bike, or it gets destroyed in a fight. You can even customize and improve the performance of it through the course of the game at camps. Bikes can also take damage which needs to be repaired, and constantly filled with fuel. At first, the bike is a gas guzzler, but improvements will ease its thirst.

There are three skill trees that allow Deacon to become more proficient. These are categorized under three branches: melee, ranged, and survival. I found myself chasing after survival skills first, then the rest as the skills didn’t quite appeal to me or seem worthwhile. There’s also an inventory for collecting ammo, items, flowers, and more. These items can be called for crafting things like melee weapon improvements, throwables, healing kits, and more. None of the “survival” elements of the game seem overbearing, but rather a natural extension of the gameplay. 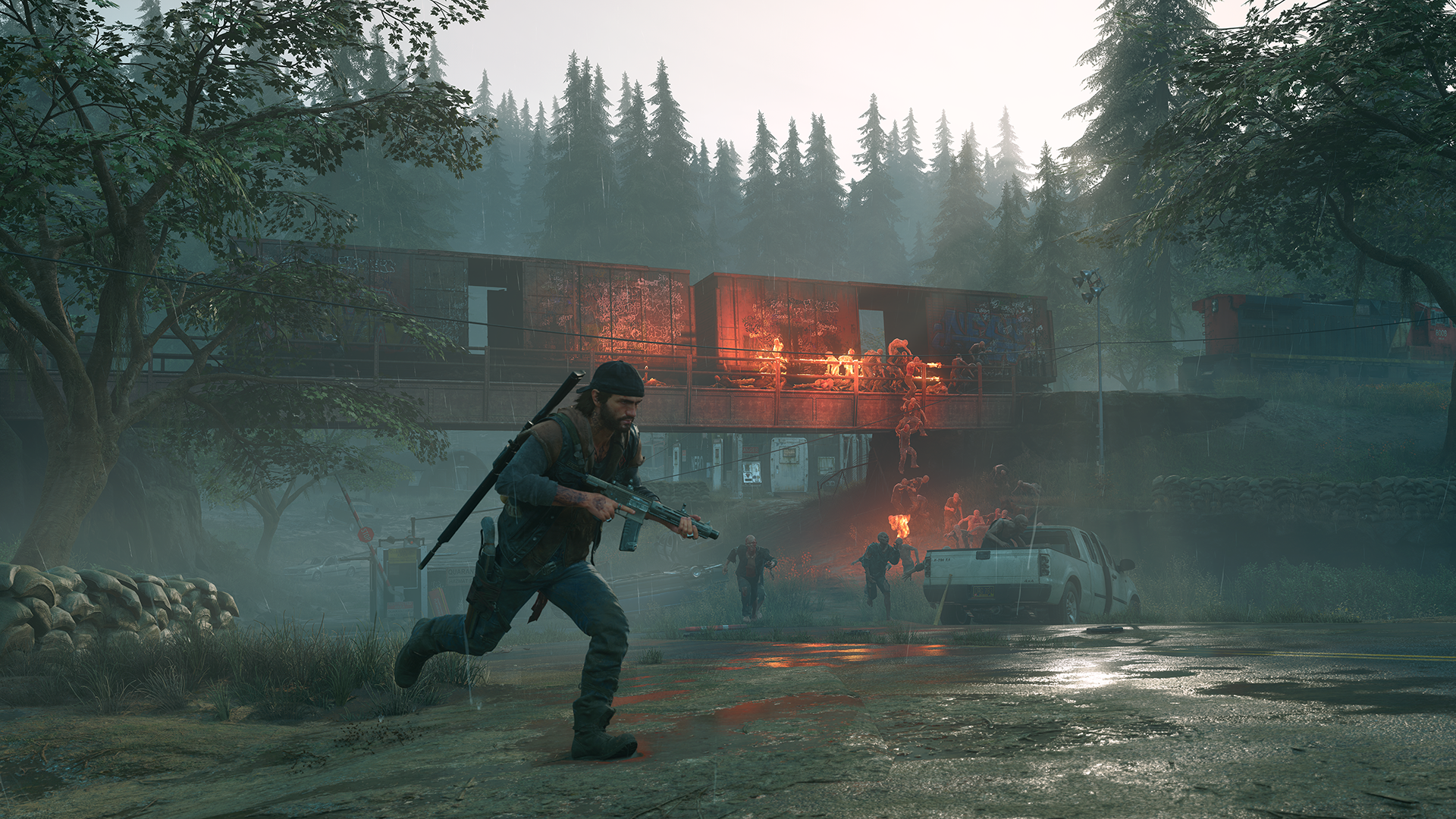 There’s even a Challenge Mode that exists outside of the campaign. You can take in specific challenges like surviving a horde or doing a specific action in order to complete it. There’s sub-challenges within the individual challenges for added bonuses. This is a great way of jumping straight into the action, with nothing at stake. It’s certainly a different change of pace from the core game, but it’s also a very fitting way to play as well. This is a mode not to be overlooked.

The game does let you save anytime, anywhere. This is true so long as you’re not in an active mission, to mean anything but the open-world. There’s even a quicksave option which can be done via the bike, which is a really handy way to ensure progress isn’t ever lost beyond the manual and autosaves. I played the game with all of the control options that I had available to me. With keyboard and mouse, the game is extremely playable, if not a bit floaty when using the bike, but aiming is incredibly precise. The Xbox controller was a bit finicky, both an official and third-party controller would sometimes have unresponsive sticks – hopefully this gets fixed soon. I then used my DualSense controller, and Days Gone instantly recognized it, but as a DualShock 4 instead. It worked flawlessly, and would be the controller of choice here. The game even supports the Switch Pro controller, which I couldn’t test. In having multiple controllers plugged in at once, I was even able to hotswap between the controllers with ease. Aside from the Xbox controller issues, no matter how you want to play, the game can be played with little to no friction.

The game is a couple of years old, but has incredible detail. During my time playing the game, I ranged 100-120fps almost at all times with max settings. There’s little else I can say about the visuals or performance, it is one of the better optimized games that doesn’t rely on NVIDIA’s DLSS technology. There’s two main questions to answer here: Should you get this on PC if you don’t have PlayStation? Yes. Should you get this on PC if you already have a PlayStation 5? Probably not. The games on either system are comparable, and it just comes down to preference. But for things like ultrawide support and keyboard and mouse, PC is definitely the way to go. Days Gone is a different kind of zombie post-apocalypse with survival elements, even if its story is mostly forgettable. Its world feels alive and dynamic set in the wilderness of Oregon. While not outright demanding you play stealthily, it will be satisfying for doing so. Though when it’s time for action, the game keeps up with a healthy amount of weapons and tools to dispose of the swarm trying to kill you. It may not be a masterpiece, but it is one hell of a ride.