Every time I’m greeted with “Welcome to Biomutant” from the game’s narrator at the start screen, I feel personally invited to play the game. And that’s the whole game in a nutshell, it’s an alluring and easy-going RPG that evokes games like The Witcher 3, Fallout 4, and even Devil May Cry; all in a vibrant and exciting world that’s familiar, yet different. Experiment 101’s first game arrives just over four years since it’s announcement, and it does not disappoint with its post-apocalyptic world, martial arts, gun fu, and grandeur. BIOMUTANT is an exotic adventure that’s a treat for the senses. 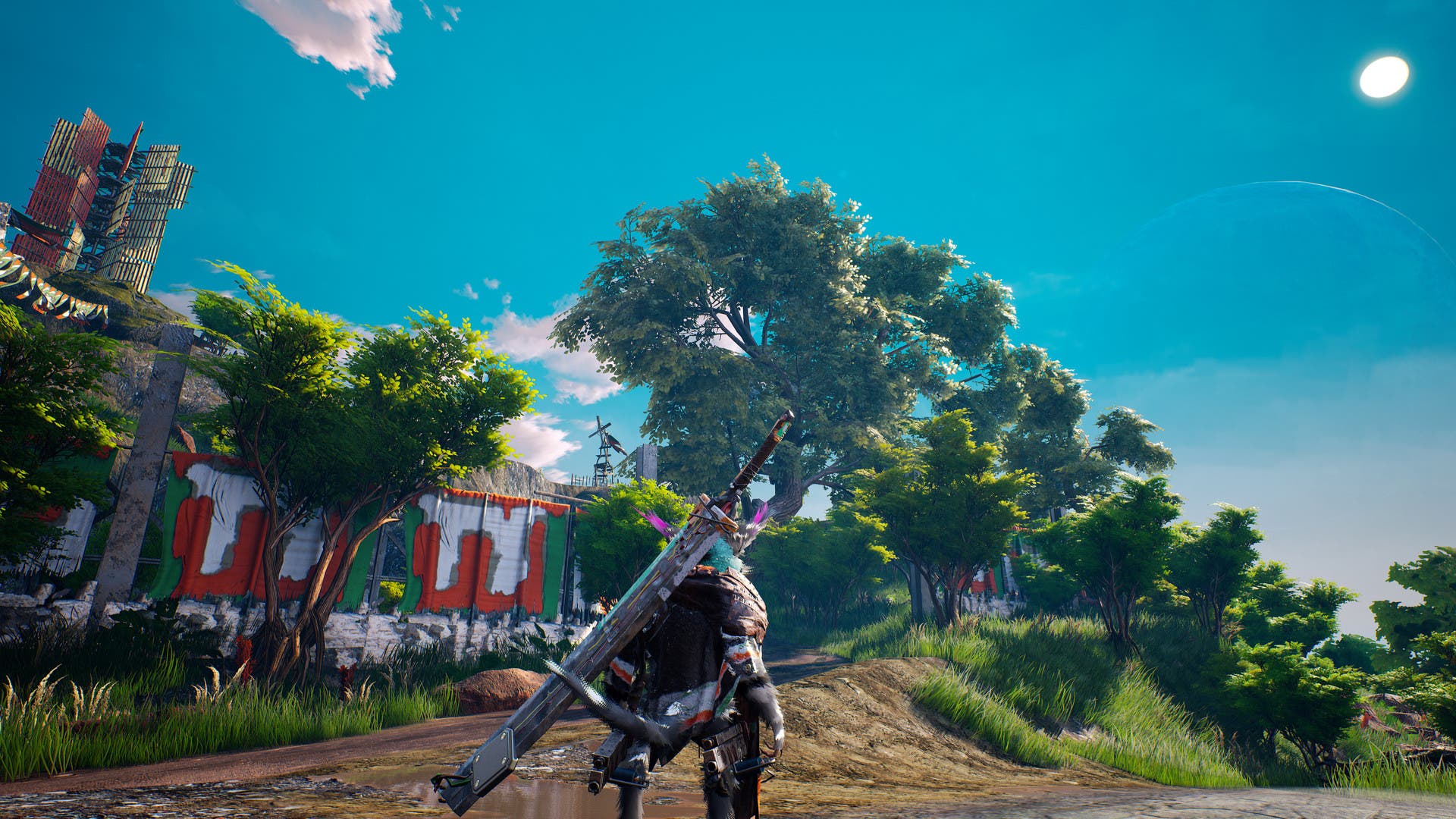 After a stylish intro cinematic, the game sets up some really great combat that has you thinking, “I bet you can’t do that”. But sure enough, you can, and the game teaches you how. Actor David Shaw-Parker lends his voice to be the narrator for the whole game, even so much as to speak for all the characters as the creatures of the story speak another language entirely. An ecological disaster of some kind has caused an apocalypse. The humans are out, and mutated animals are in. There’s a gigantic tree known as the Tree of Life, and it’s existed as long as the new world has existed, but it’s now at-risk of being destroyed thanks to four “Worldeaters”, massive mutated creatures that threaten all life by spreading a plague. It’s up to you and the relationships you forge to undo it, and stop them from ending the world.

But to do any of that, you’ll first have to create your character. Going a bit deeper and stranger than other games of its kind, BIOMUTANT tasks you with selecting one of six breeds of animal which affects the starting stats such as vitality, strength, intellect, agility, charisma, and luck. It’s here where you need to start thinking about how you want to play the game. From there’s you’re on to customize fur, colors, and even select one of five classes. You’ll notice that you’ll get a seed code you could share to perhaps share min-max creations, or outlandish horrors. Whatever you decide, this is a game where no one’s creation will be exactly the same as anyone else’s.

One of the first things you’ll be doing, is being thrust in-between two warring factions. You’ll have to make a decision with one of them and pursue making the other stand down through diplomacy or sieging their fort. It’s easy to tell which one of the tribes are the good from the bad ones. There will be critical points in which you’ll be having discussions and be presented with a choice, and the game thankfully shows what your chances of success are, and what risks you take. There’s even a possibility to stop the war entirely through a well-placed persuasion attempt, provided your charisma is high enough to convince them.

Like many games with a time-critical, and world-ending main quest, BIOMUTANT too suffers the “problem of urgency”. It’s a world begging to be explored, yet all of the quests and conversations you have other civilians and important characters nearly all reference the impending cataclysm. This is exacerbated by how fun the side quests are, like The Witcher 3, they’ll keep you busy for the majority of your time with the game. You’ll be distracted by finding ways to make your boat go through stronger waters, or by looking for upgrades to your mech, or getting lost in a hunt for collectibles. Even ones that are simple like retrieving an item, is an excursion through a small dungeon known as a vault that will lead you to high-tier loot and have you fighting extraordinary bosses. It’s a game full of surprises, and shows that side quests can be the main attraction. 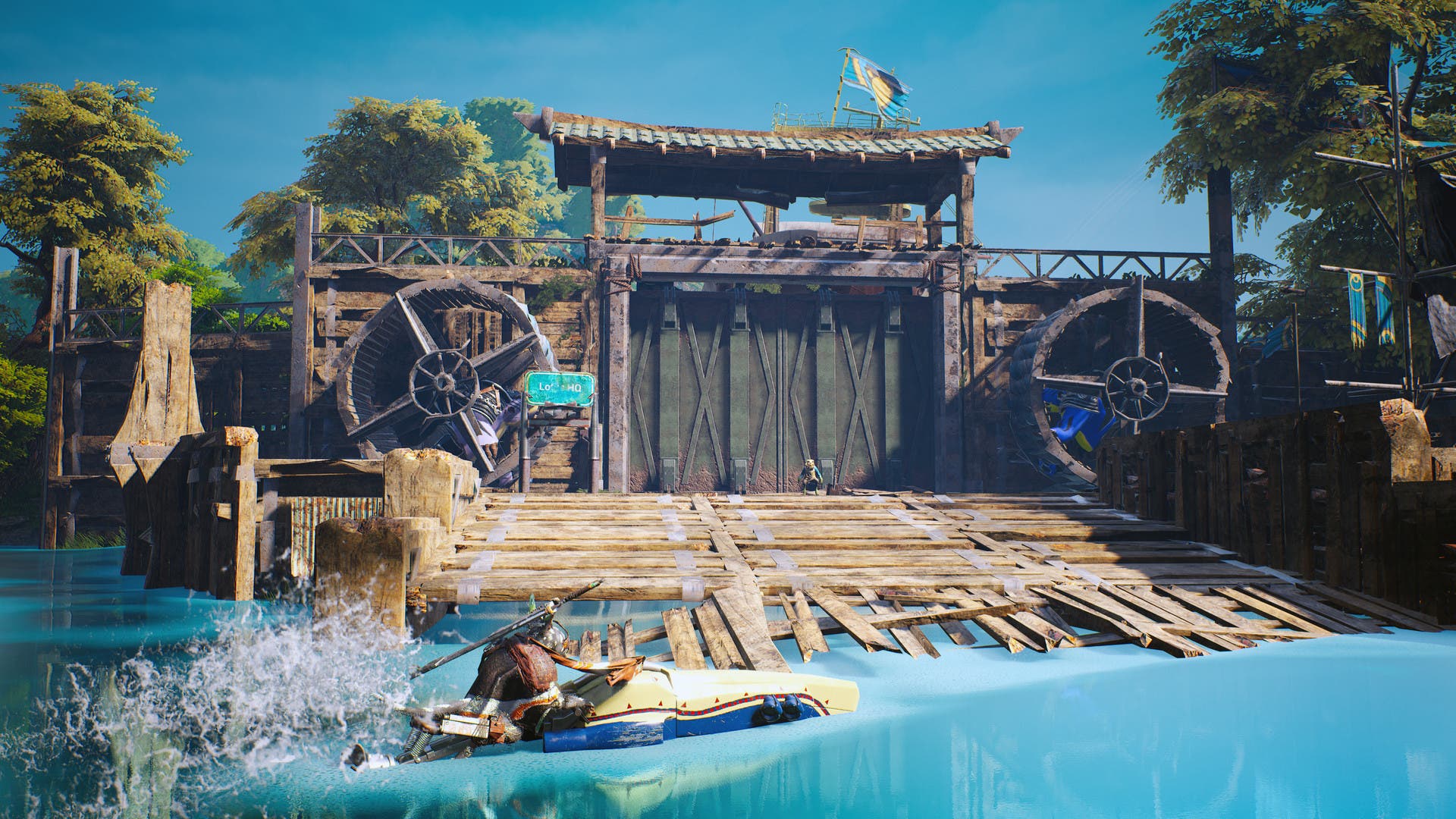 Exploration is everything in this game. You’ll traverse different biomes like jungles, deserts, swamps, and plains. It all feels cohesive, and can be fast traveled with ease. So long as you find a signpost to pee at – because how else would you mark it? The open-world can be sparse between fights or towns, but it’s awe-inspiring landscapes are worth the ride. This especially true as you’ll acquire a mount to get you across the landscape, and you’ll be getting new ones like an MMO that are bigger and faster than the last. The game can be completed just over ten hours if your critical path it, but traditional playthroughs will see at least fifty hours of playtime, and you want to spend as much time as you can in this world.

I love talking with everyone I can find. In the absence of humans, the mammalians are using terms that have been lost in translation. For example, when talking about childhood, they refer to it as “kidlihood”. Or one of the major characters, instead of being an elder, he is “Out-of-Date”. It’s wholly charming, and a refreshing approach to what would happen if our texts, technology, and way of communication were damaged or lost altogether. BIOMUTANT explores this to great effect. 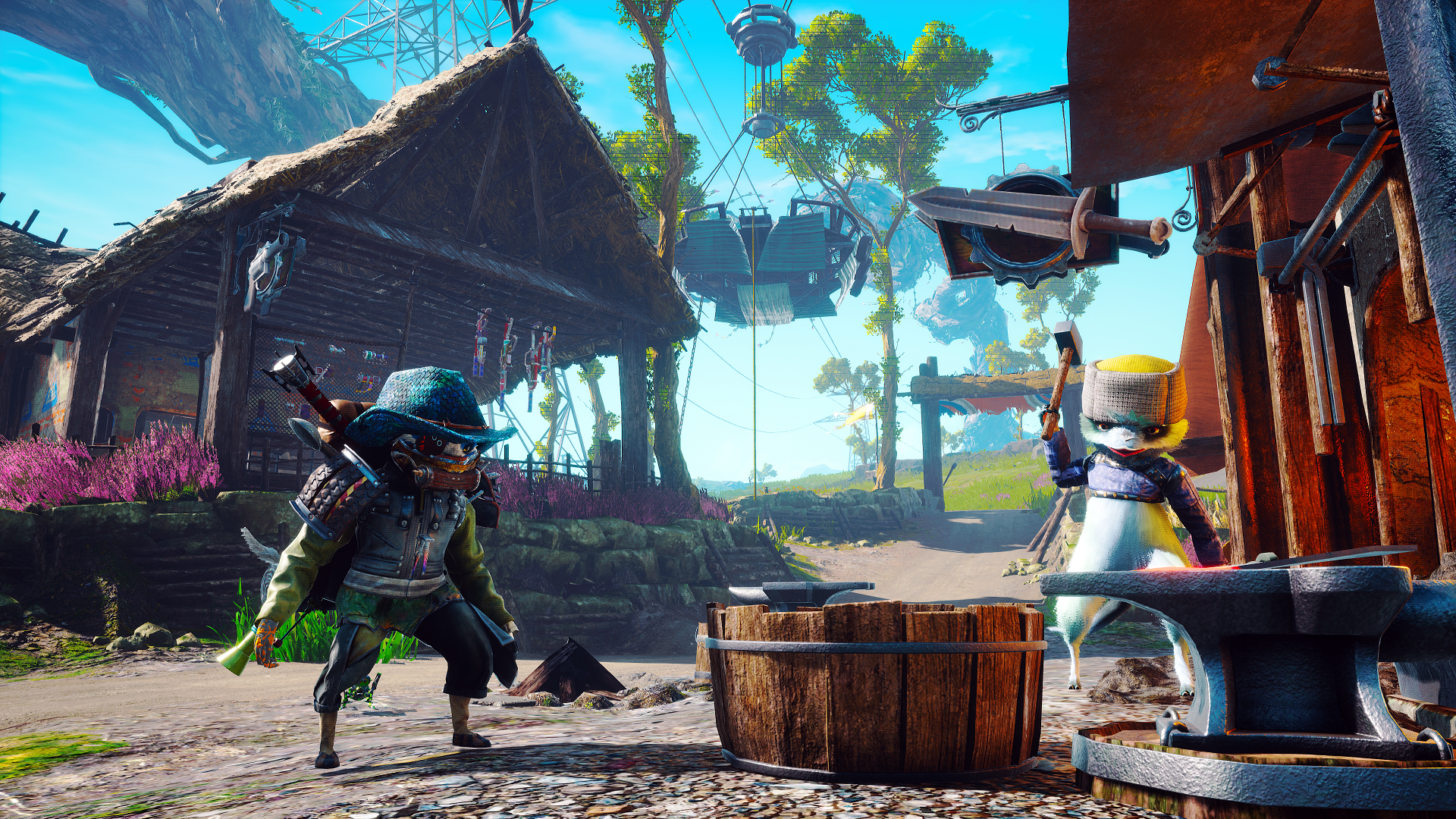 While the combat can be button mashed to victory, it’s not only better but ideal to use the dashes and parries for a more involved fight. No matter how you decide to play, everything is smooth and like action movies complete with slo-mo to highlight your best moves. This is where the game feels its most Devil May Cry, as you’ll be jumping in the air shooting and following up with a melee combo. There are muck-filled hazard zones that will kill you from either heat, hypoxia, or even radiation. You can protect yourself from them through special suits, or the mechanized mektons. There’s only certain places you can use your mek, boats, and mounts, but there’s always a way to get around safely. When you unlock the ability to fly, then it’s absolute freedom.

Certain items or means of progressions are halted by the need to complete puzzles. The puzzles themselves are rather simple, and for the first several hours you’ll be given rotation puzzles which is just lining up colored lights correctly. Then you’ll start to be introduced to circuit board and cable connect puzzles. I don’t mind their inclusion, and they’re satisfying to solve, but they could just as easily not be in the game, and not be missed.

For the first time in a long time, crafting is actually meaningful here. Rarely will you find weapons at any point past the early hours better than anything you can make. You’ll be able to make ranged and melee weapons through the game’s interface, provided you have the parts to do so. With guns, you’ll be selecting the type of gun it’s going to be, whether it’s a shotgun, rifle, or something automatic. Then you’re slotting in various handles and add-ons from all kinds of sources. And like the character you created at the beginning, any weapon you make is going to be something entirely unique, and hardly anyone playing the game is going to have the exact same one.

Throughout the game, as you level up your core stats, you’ll also have special items to upgrade your Wung-Fu, the game’s martial arts that spans all weapons to include unarmed combat. There’s some really great moves that are easy to execute, that the more at your disposal opens up more opportunities for you to be invested in each fight you take on. There are resistances you can build up to protect you from the elements to improve your survivability. And through mutation, you’ll have access to Psi Powers. These too can be unlocked, but there are limitations. There’s an aura you have, and you’ll accrue light and/or dark points based on your actions. I feel like this system is very out-of-place, even with everything going on in the game, but it does enhance the game’s replayability. 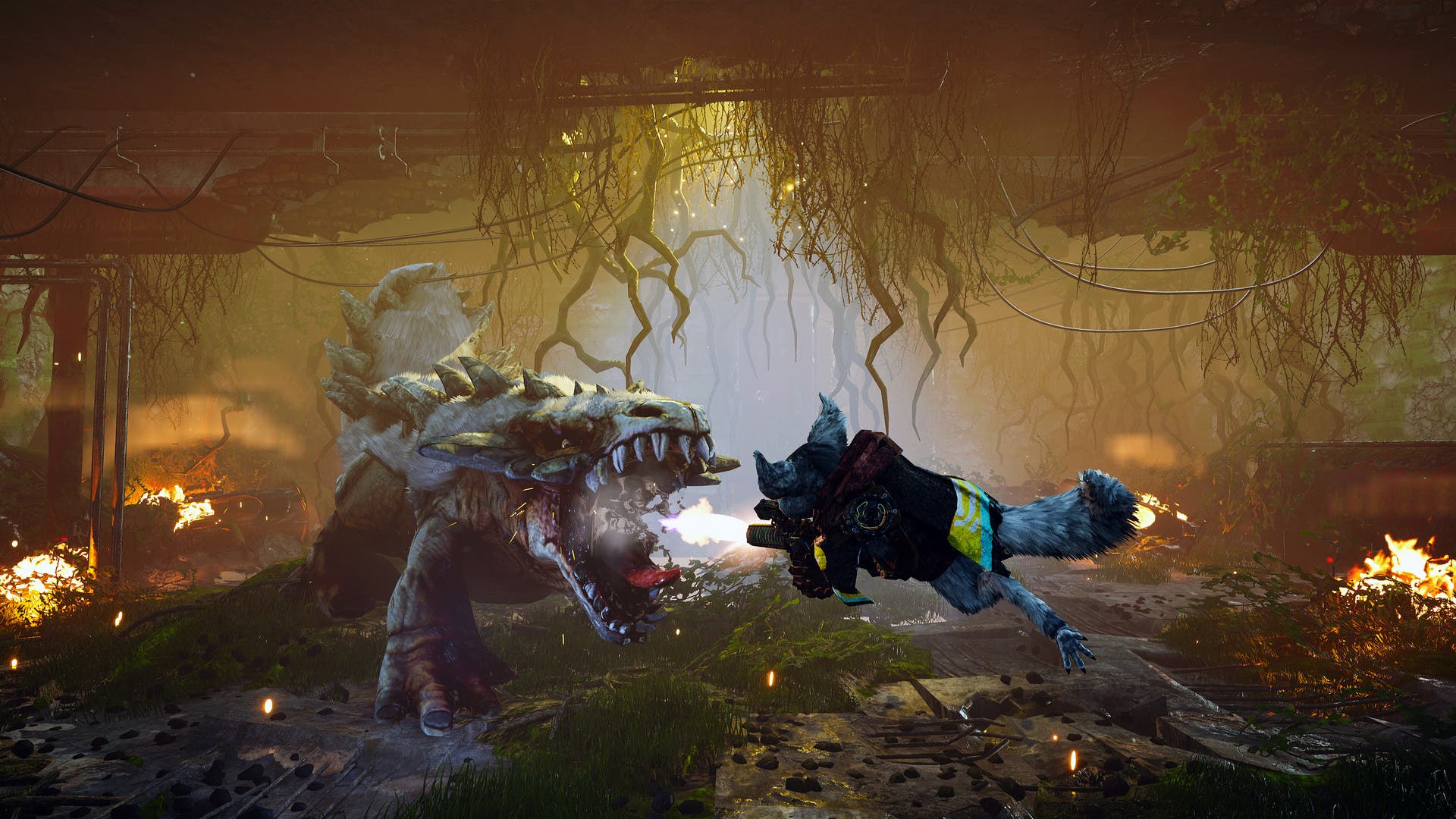 BIOMUTANT is an absolutely gorgeous game on PC. The fur tech alone, is something you’ll be staring at for a while. Even the blades of grass have the same type of movement applied to it, the lush overgrown is reminiscent of Fallout 4 here. The entire game so vibrant and bright, every scene is worth the price of admission. It’s so full of detail, Experiment 101 even gets the rainbow banding of oil spots right. The day and night cycle goes by fast, but any time of day is gorgeous, and perfect for the included photo mode. All of this said, the game never dropped below 60fps, to include all of the incredible vistas on the screen at any given point. 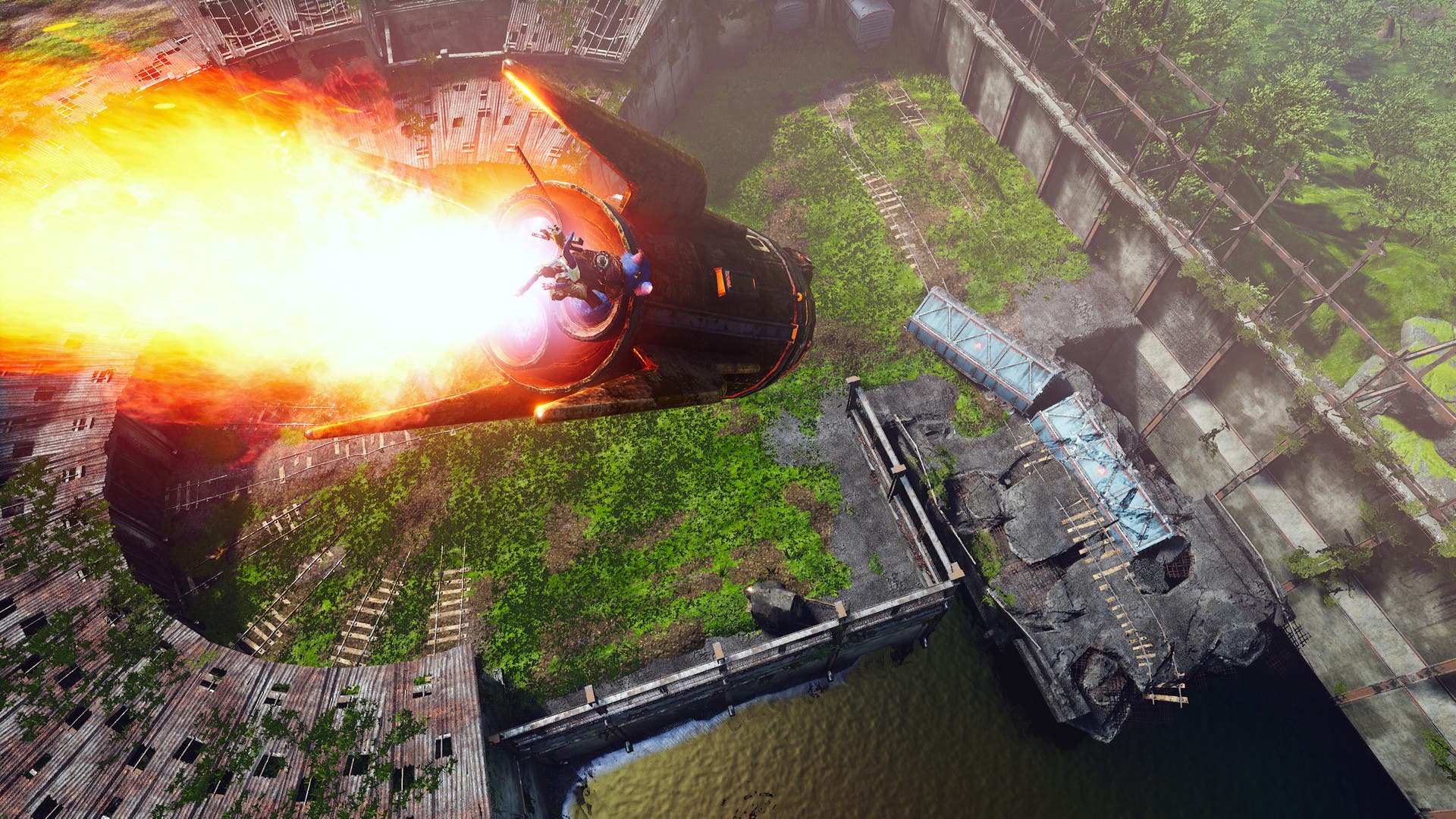 BIOMUTANT is an adventure like none other. With its character creation and morality decisions, this is one that has near-infinitesimal replayability. At times the game’s ambition gets the best of it by feeling like it’s doing too much at any one time, but it just manages to pull it off. It’s wild, beautiful, and an amalgamation of the games it is so clearly inspired by. Offering the best of modern games, with enough originality to distinguish itself from the rest. BIOMUTANT is an accessible, exciting RPG that I can’t get enough of.