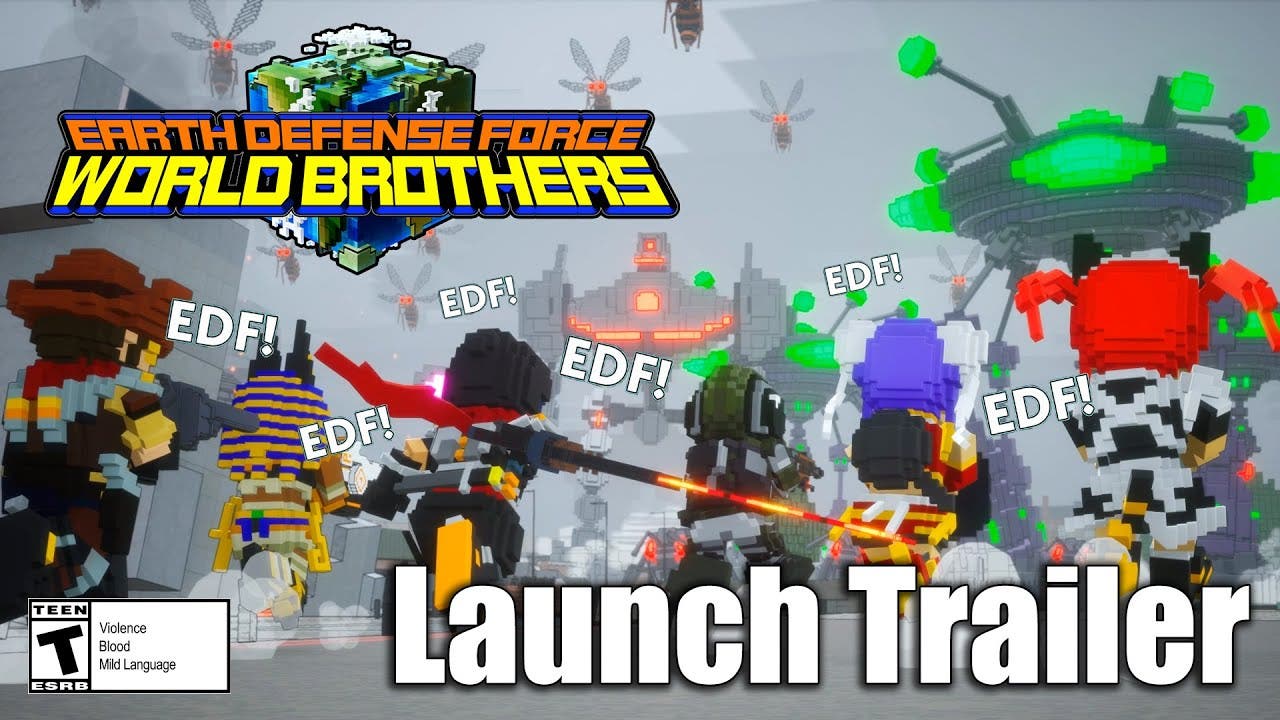 OAKLAND, Calif. – May 27, 2021 – D3PUBLISHER Inc., a leading Japanese games publisher, along with development team YUKE’s, today announced that the official English version of the voxel-style third-person shooter EARTH DEFENSE FORCE: WORLD BROTHERS has launched in North America, Europe, and Asia on multiple platforms. EARTH DEFENSE FORCE: WORLD BROTHERS enters new, blocky territory as players across the globe can square-off against invaders by assembling an elite squad of customizable characters, new and familiar to the EDF series, that players rescue throughout the campaign to restore a shattered “Voxel Earth” from many pieces back to peace.

The standard edition of EARTH DEFENSE FORCE: WORLD BROTHERS can be purchased digitally for $59.99/€59.99/£53.99, on the Nintendo Switch™ system for the first time in the EDF series’ history, PC via Steam, and the PlayStation®4 computer entertainment system. The digital deluxe edition is also available to purchase, but only on the Nintendo Switch™ system and PS4™ system for $79.99/€79.99/£71.99, which includes the season pass and all the DLC that was previously released in Japan for EARTH DEFENSE FORCE: WORLD BROTHERS. A detailed list of everything included to the digital deluxe edition on consoles can be viewed below as well as on the D3P DLC webpage here and can also be purchased separately as DLC today across all three platforms:

To celebrate the global launch, D3PUBLISHER is excited to announce that EARTH DEFENSE FORCE: WORLD BROTHERS is available for a generous discount of 20% off for both the standard edition and digital deluxe edition for the first week for PS Plus members on the PS4™ system starting today for new and EDF fans alike. PC Players will not have a digital deluxe edition to purchase on Steam, but the standard edition will have a discount of 20% off for the first week too starting today.

“On behalf of D3Publisher and creators, I am excited to bring a fresh look to the newest EDF game for fans of the series and new players alike,” said Nobuyuki Okajima, Producer at D3PUBLISHER and Creator of the EDF series. “With EARTH DEFENSE FORCE: WORLD BROTHERS, our goal was to create an EDF experience that can be enjoyed by the fans who are familiar with the EDF series along with a new generation of players who never had a chance to save our Mother Earth – and I hope everyone enjoys the new chapter alongside their friends in the fight to bring a broken Earth back to one Peace!”

In a parallel universe where everything is in 3D voxel art, a new battlefield has taken the stage in the EDF series. Voxel Earth is falling apart into square pieces, breaking its blocky peace, as alien invaders in large motherships have caused a catastrophic rift in their massive attack. With the world in turmoil from an alien attack by enemies from the EDF series, the player and the “EARTH DEFENSE FORCE” must rise to the occasion and save the day to restore a shattered Voxel Earth to one peace.

Within this new universe of EDF where everything is displayed in voxel art, an art form with 3D models constructed together from 3D cubes, players will be taking the fight to various voxel-formed landmark battlefields with inspirations from America, United Kingdom, Japan, Egypt, and more in the span of the war for survival. Players can expect access to a massive selection of memorable EDF legendary soldier classes and weapons, ranging from the original numbered “EARTH DEFENSE FORCE” series all the way up to EARTH DEFENSE FORCE 5 along with the additional spin-off EDF series of EARTH DEFENSE FORCE: INSECT ARMAGEDDON and EARTH DEFENSE FORCE: IRON RAIN. On top of recruiting and utilizing all of the iconic EDF soldier classes and weapons in the EDF series, players can look forward to recruiting dozens of new characters to discover all over Voxel Earth as local EDF members known as “Brothers” and “Sisters,” like the Cowboy Brother or Maid Sister, as some of the new recruits to enlist! There are over 100 new members for players to find in EARTH DEFENSE FORCE: WORLD BROTHERS for endless combinations of skill sets, personalities, and abilities to best tackle the mission at hand.

Though players can save the world in the campaign solo with AI teammates, they can also enlist with friends in 4-player online Co-op Play on each platform; however, the game does not support cross-platform play. Players can also look forward to playing offline with two-player split-screen only on the PS4™ system and four-player LAN Co-op exclusively for the Nintendo Switch™ system, which requires players and their friends to each have their own Nintendo Switch™ and copy of the game.