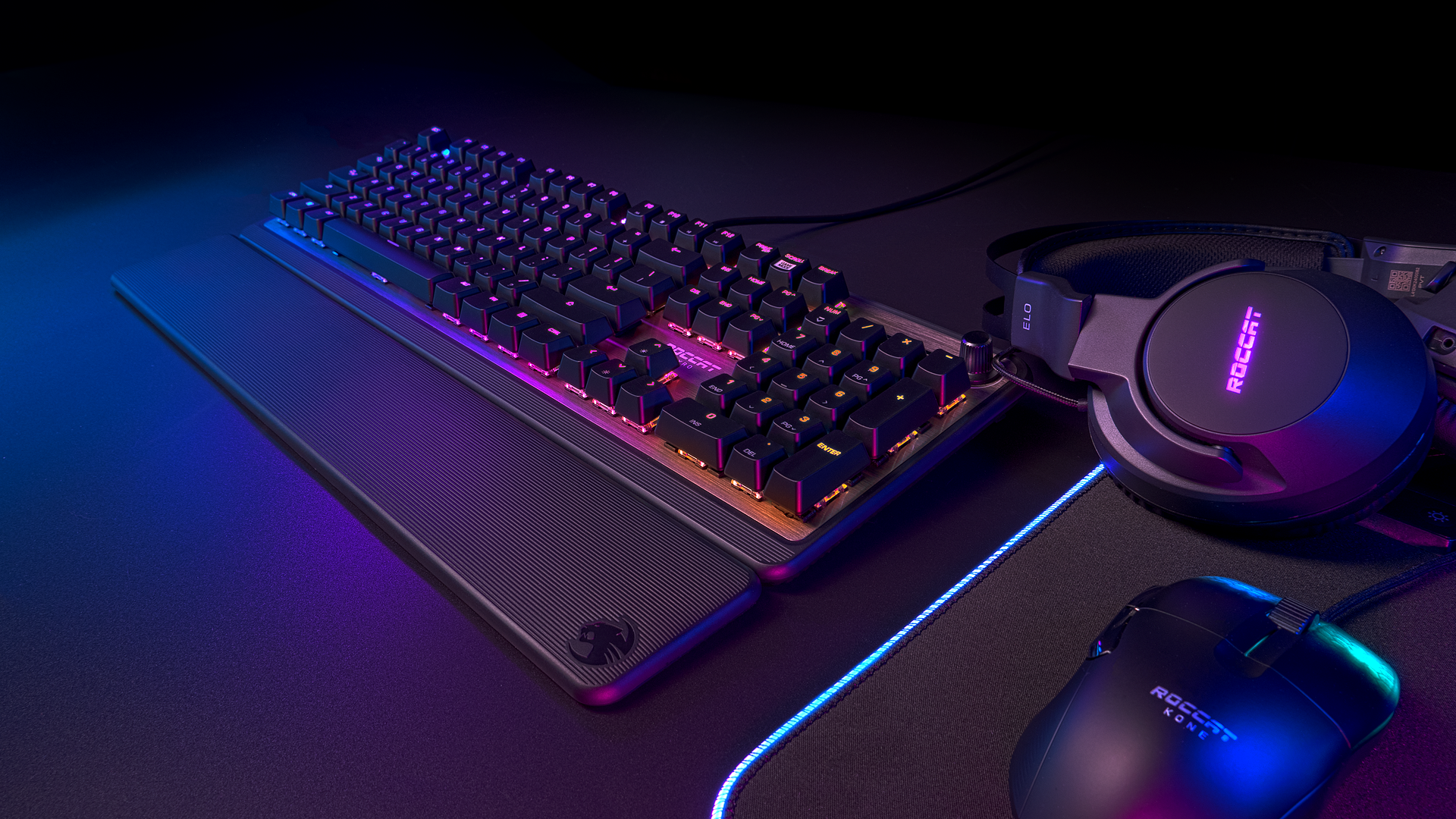 ROCCAT, now under the Turtle Beach umbrella have had an impressive hardware line-up in the past, but it feels like 2021 is the year of ROCCAT. This is a PC-only brand, and it shows. Every little detail has been meticulously researched and embedded into the core of this keyboard. The ROCCAT Pyro won’t set the world ablaze in terms of features, but it won’t leave you burned by the lack of them. This is one fantastic keyboard that’s sure to light a fire in the competition. 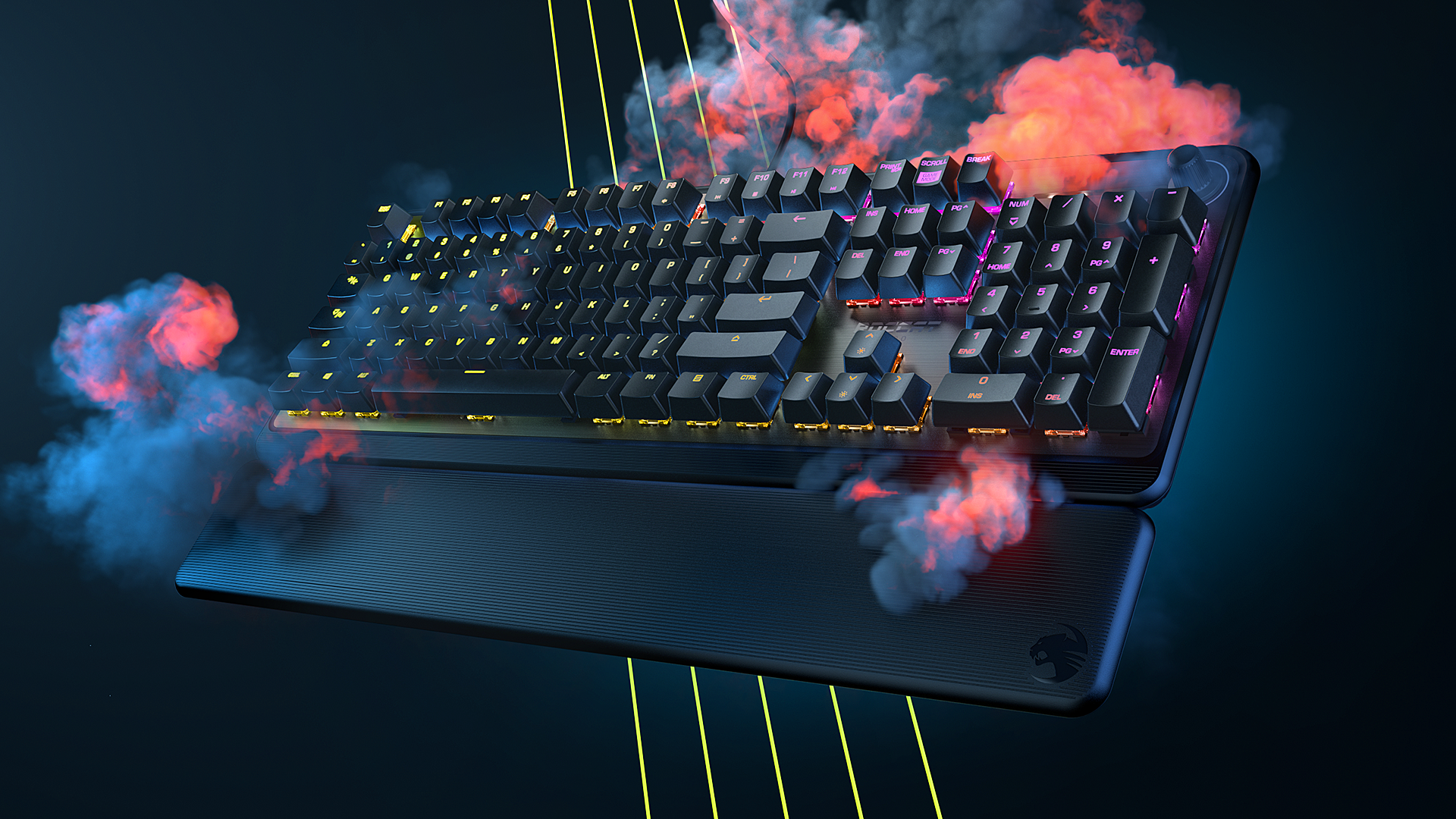 The Pyro’s RGB is rather bright than others in the market. While I like the styling of the RGB plastic of the Magma, it has less zones. As a result, the brushed metal look never is a bad way to go. I was surprised to see that this has a rubberized USB cord, and not a braided one that I’m used to, or even the recent Phantom Flex Cable found on the Kone Pro mouse. I don’t mind the rubberized cord, and never found it to be a problem, but it does seem to be a bit out of place even with its generous length. The keys are of a softer sound, really helpful when typing but even makes playing, streaming, and recording a bit more enjoyable without the heavy click-clacks of other keyboards. In terms of the keys themselves, they feel soft to the touch. One thing that stands out, is that there aren’t any dedicated media keys. There’s media key shortcuts on the F# keys that can be used with the FN (function key) to call them, which is not as easy to activate as dedicated media buttons. It’s disappointing, but it helps keep a lower profile and smaller size without.

If nothing else, the volume knob is big and bold, like how you’d want it to be. While using it, I was delighted to see a visual representation of the volume shown in the lighting as I rotated the knob left to right to raise the volume. And turning down the volume showed the RGB lighting do a color change right to left as well. The way it shows this to you is really clever, and a nice touch that you wouldn’t otherwise see. The wrist rest is detached by default, but it is a snap (heh) to get into place, and feels like a natural extension of the keyboard. Though it is very prone to crumbs, dust, and cat hair. You’ll notice that it has a smaller form factor that other full-sized keyboards such as this. It’s not as tall as I would’ve liked when the back feet are propped up, but it’s enough to enjoy, and perhaps is more ergonomic this way. The feet for both the wrist rest and keyboard are of nonslip material that even on a cloth mouse mat, do not move. All of this makes the $99 price tag on this full-sized keyboard an enticing and attractive offer.

What you’ll find with every click of the keys in this Pyro are Red TTC mechanical switches, which unsurprisingly are similar to Cherry MX Reds. These keys have a 50 million keystroke lifetime, which is more than anything we’ll ever accomplish. These switches only need 2mm of actuation, with 4mm to be fully pressed. These keys fit in the Goldilocks category in that they feel just right, never too short or too long to activate. Anything more or less feels wrong. It’s an impressive set of switches, that are on the quieter side which many can appreciate.

The box talks about the Easy-Shift [+] technology. What this allows for is for additional keys and macros beyond the default set. While in “GAME MODE” (highlighted on the keyboard as if you activated Num Lock or Scroll Lock) lets you use CAPS LOCK as a modifier key denoted by [+]. Creating and using additional functions out of other keys really extends the capabilities without relying on macro keys or anything external to support it. It’s really smartly designed and I’ve only scratched the surface of how I could use it effectively. 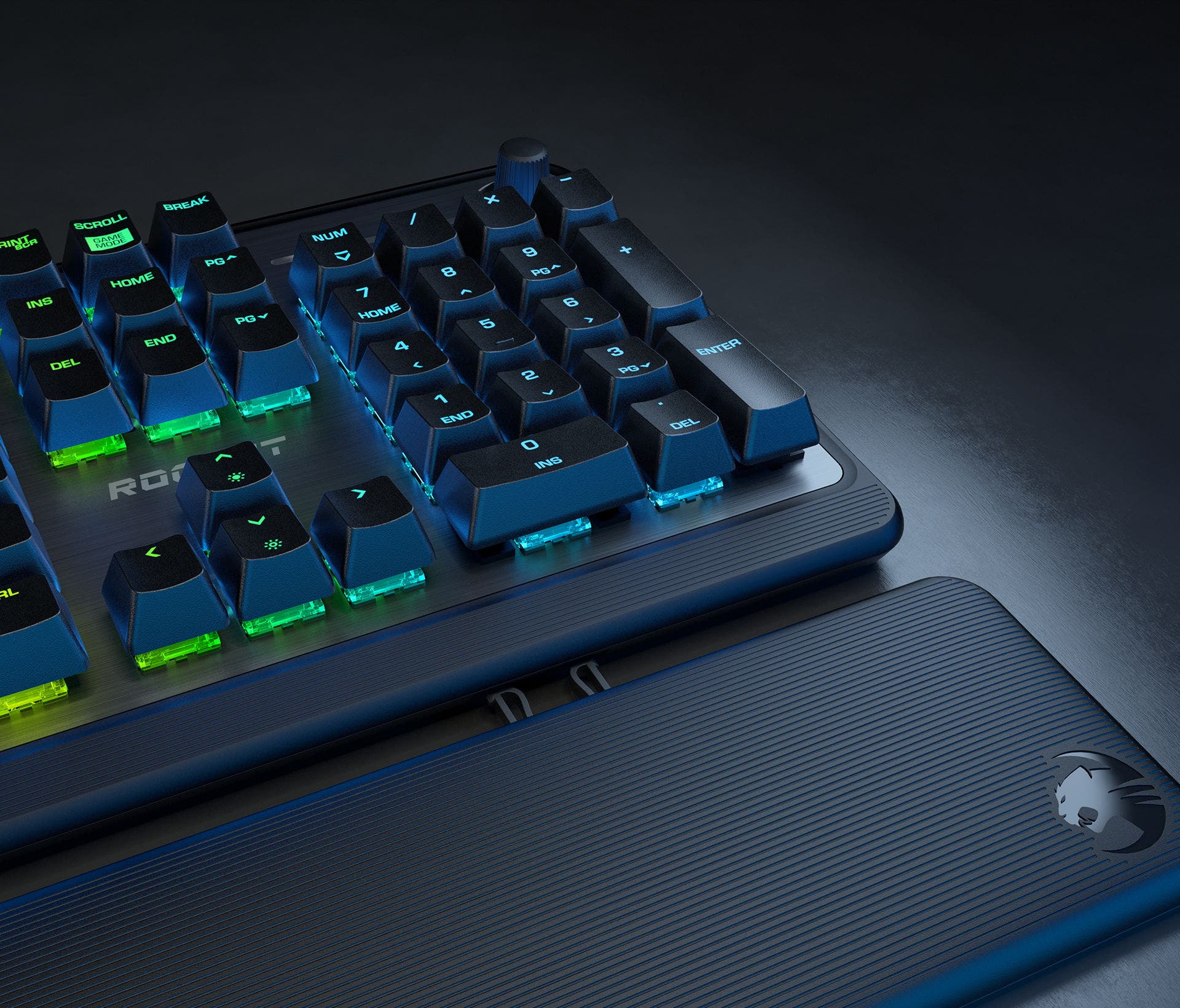 ROCCAT Swarm is the software to use, and it’s remarkably useful. There’s a setting where you can enable ‘Auto-Apply’ and with every change you make, instantly shows on the keyboard. It’s a really great way to see if the RGB profile you’re building is the way you want it, or not.

It does seem to have some arbitrary features that I’m not sure who it’s for, but it has a whole section dedicated to sound effects. So if you’re issuing key presses, you can tell Swarm to make it sound like a typewriter, or shoot laser beams, or just beep. I didn’t find any of them enjoyable for any lengthy period of time. Though setting things like repeat rate of keys and what each profile slot can do, are what I come for. The onboard memory is perfect for storing all of this, without requiring the software to be installed.

While the Pyro isn’t the brightest keyboard on the market, it does have some gorgeous illumination all the same. Using ROCCAT’s AIMO technology, it uses AI to randomly and procedurally create patterns and shifts of color that are natural and unlike anything you’ve seen before. It adjusts to the games you’re playing, and the things you’re doing. For instance, as I’m typing this review, the letters that I press, change colors and are contrasting from what was there before it. 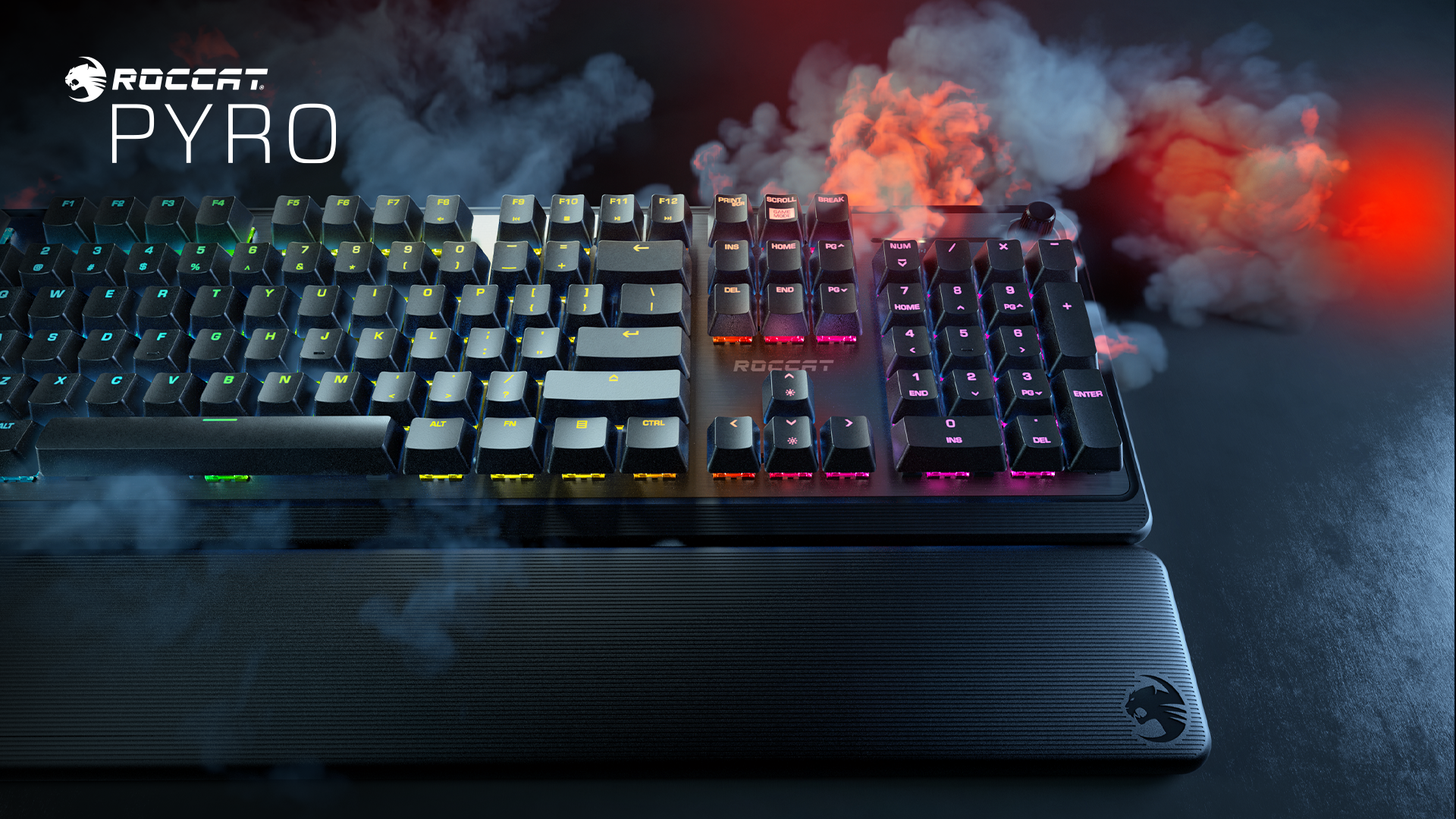 ROCCAT continues to be underrated in the hardware space, and the Pyro keyboard is one not to be missed. It’s quiet, ergonomic, and most of all, a gamer’s keyboard that can appeal to non-gamers all the same. I do miss dedicated media keys and wish it stood taller. Affordability and accessibility is what this keyboard is about, and while the price isn’t the lowest you’ll find, it is lower than what other keyboards of its kind offer. The ROCCAT Pyro comes as a glowing recommendation, serving as the Goldilocks of mechanical keyboards.