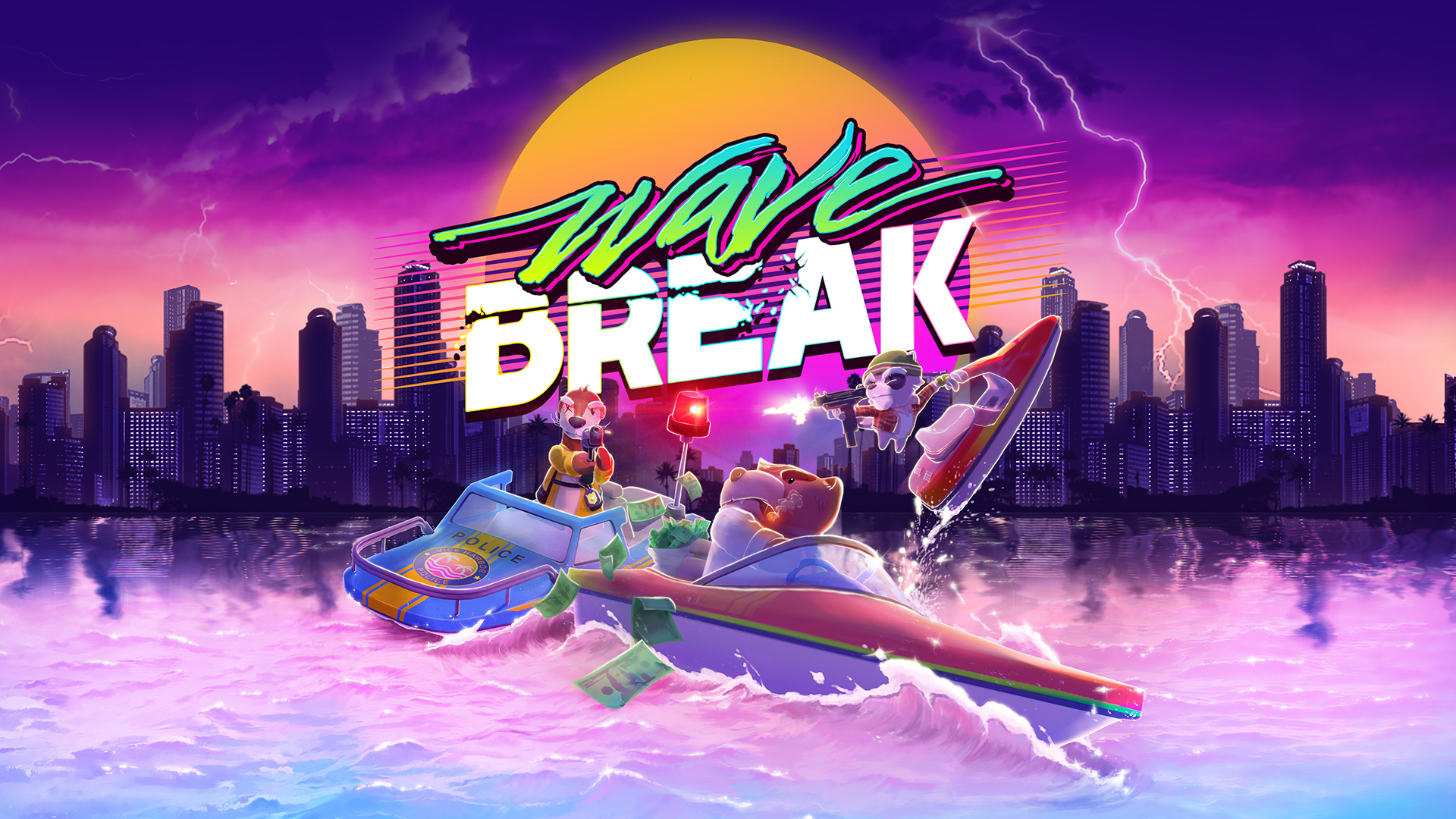 Wave Break has retrowave vibe that permeates and defines the experience. Made up of 80% Tony Hawk’s Pro Skater and 20% Miami Vice, this unlikely combo works. From completing missions that task you with blowing up a yacht, to performing an unbroken string of tricks to collect the letters C-O-M-B-O, it’s bodacious absurdity. All that’s left is to now bask in the 80s paradise of Summer, sunsets, and sunglasses that is Wave Break.

When jumping into Wave Break for the first time, the game expects you know what to do. You’ll ride around on a boat and can trick it, but how isn’t clear. A tutorial would have gone a long way here. There’s quite a learning curve, because any skills you have from Tony Hawk’s Pro Skater doesn’t quite transfer over to this one. Part of that is due to the controls not being as tight as you’d think, so it’s a bit rough in dealing the game’s physics as well. But this fades in time.

Finding familiarity in the controls is still possible, where you can press A to jump, X to execute flips, Y to grind, and B to perform grabs. Wave Break makes some changes, and manuals are instead called automatics, complete with bow and stern variants. You’ll be able to do trick combos after the first few hours where it really starts to click. More often than not, things feel herky jerky when you realize you can stop on a dime. While some will like this, it’s all part of the learning curve. Overall, the controls take time to get a feel for, but is by no means insurmountable. 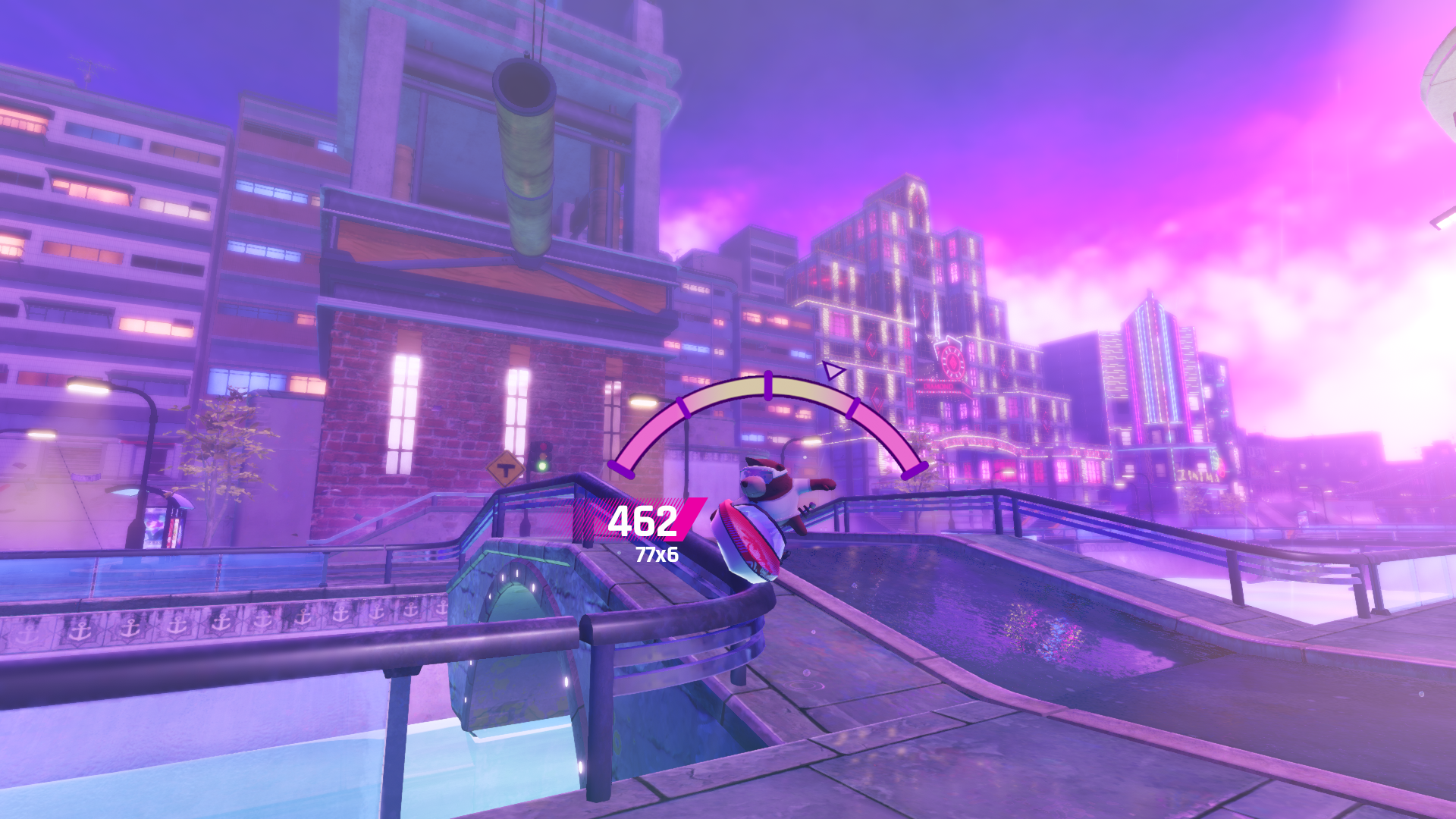 Most will start with the campaign, this is where the game will take you through each of the five maps. Though to get there, you’ll have to unlock new levels by reaching certain thresholds of objectives completed before you do. First you’ll play as Big Pin, a grizzly bear dressed like Crockett. Along the way, you’ll come across other animals and characters such as McHutchenson the weasel, Axel A. Axel the gator, and Hobo the raccoon – all of whom are playable as well. Each one has different starting stats, but as you play them and earn money, you’ll be able to even them out as you upgrade them, much like the oft-talked about skateboarding game it draws from.

Each campaign level will have a timer of three minutes to complete the objectives. Some of them can be done over time like collecting cash, and others have to be done in a single run. Things like collecting the letters B-R-E-A-K, doing specific tricks, achieving a high combo score, or even collecting the secret tape. These ten or so objectives really capture the essence of those games while still injecting its own energy. Once the time limit is reached, you can play it again, or move on to a different level (if you have it unlocked). However, there’s one glaring issue with Wave Break, and that’s how there is no quick restart. If you’re going for a very specific task in your list of objectives, and mess up, there’s an arduous series of tasks to start over that doesn’t need to happen. It doesn’t make sense why in single-player, this isn’t an option. 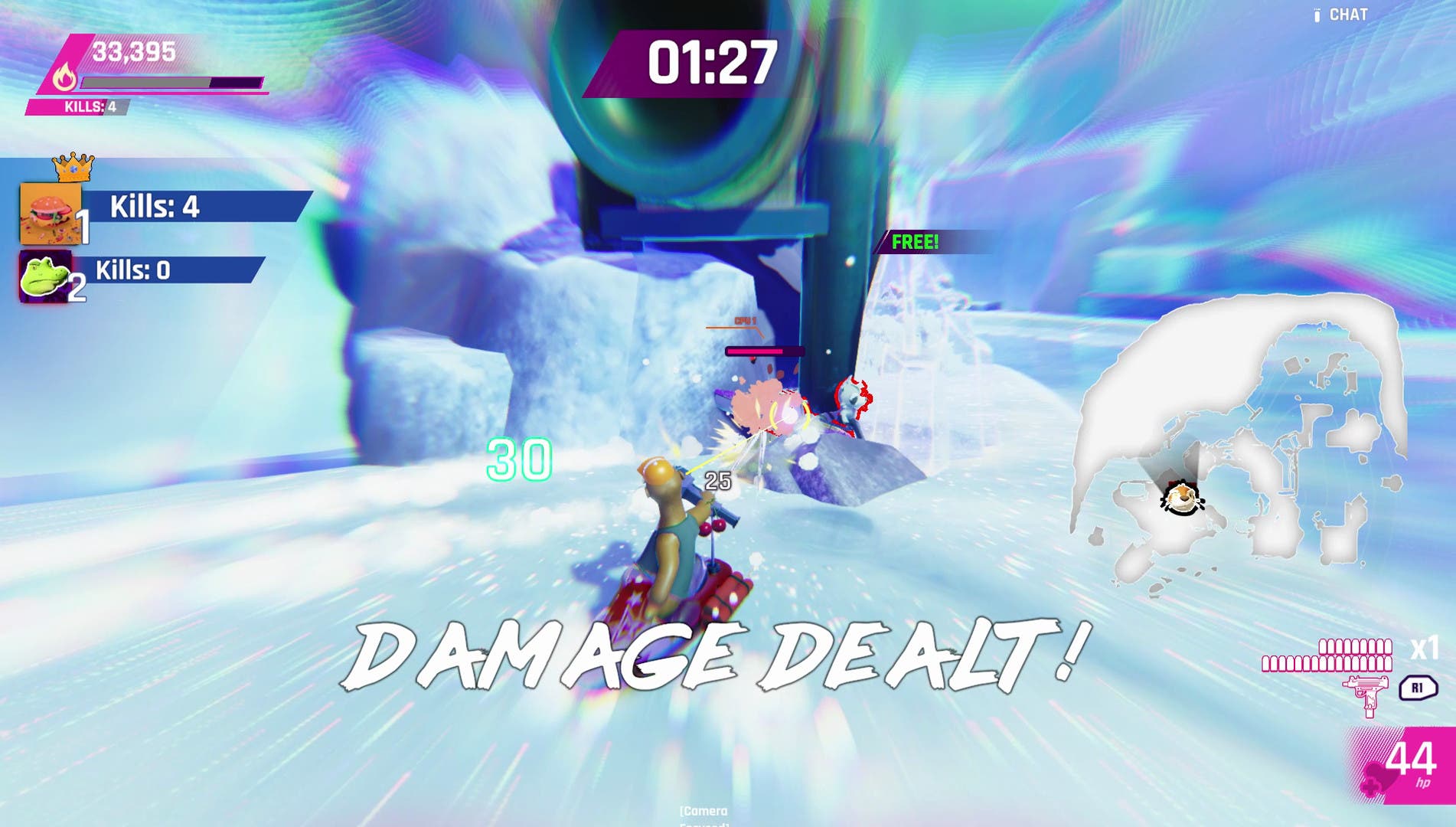 Under the Events section prior to release, was “Weezy”. This new mode lets you play on all-Weezer map, complete with a set of four objectives like collecting the letters W-E-E-Z-E-R, or their discography to unlock new cosmetic items to use in-game. Unlike other levels, this one is exactly 3 minutes and 20 seconds long, the length of the new Weezer track inside the level, and that only plays here. It’s a decidedly short map if you know what you’re doing, but the song is good (and also safe for streaming). I also think the things it asks of you are a solid challenge, making it a very worthwhile event. It’ll be interesting to see what others events will be rotated in and out as the game goes on.

On the objectives list, you’ll notice secret missions are listed, these serve as the narrative arc in the game and help progress things. Aside from the “Tony Hawk” type objectives, these missions provide the most variety and interesting parts of the game’s structure. Because whether you’re playing the campaign or not, you can merc fools at-will. These missions always involve shooting, so you’ll need to get your practice in whenever you can. 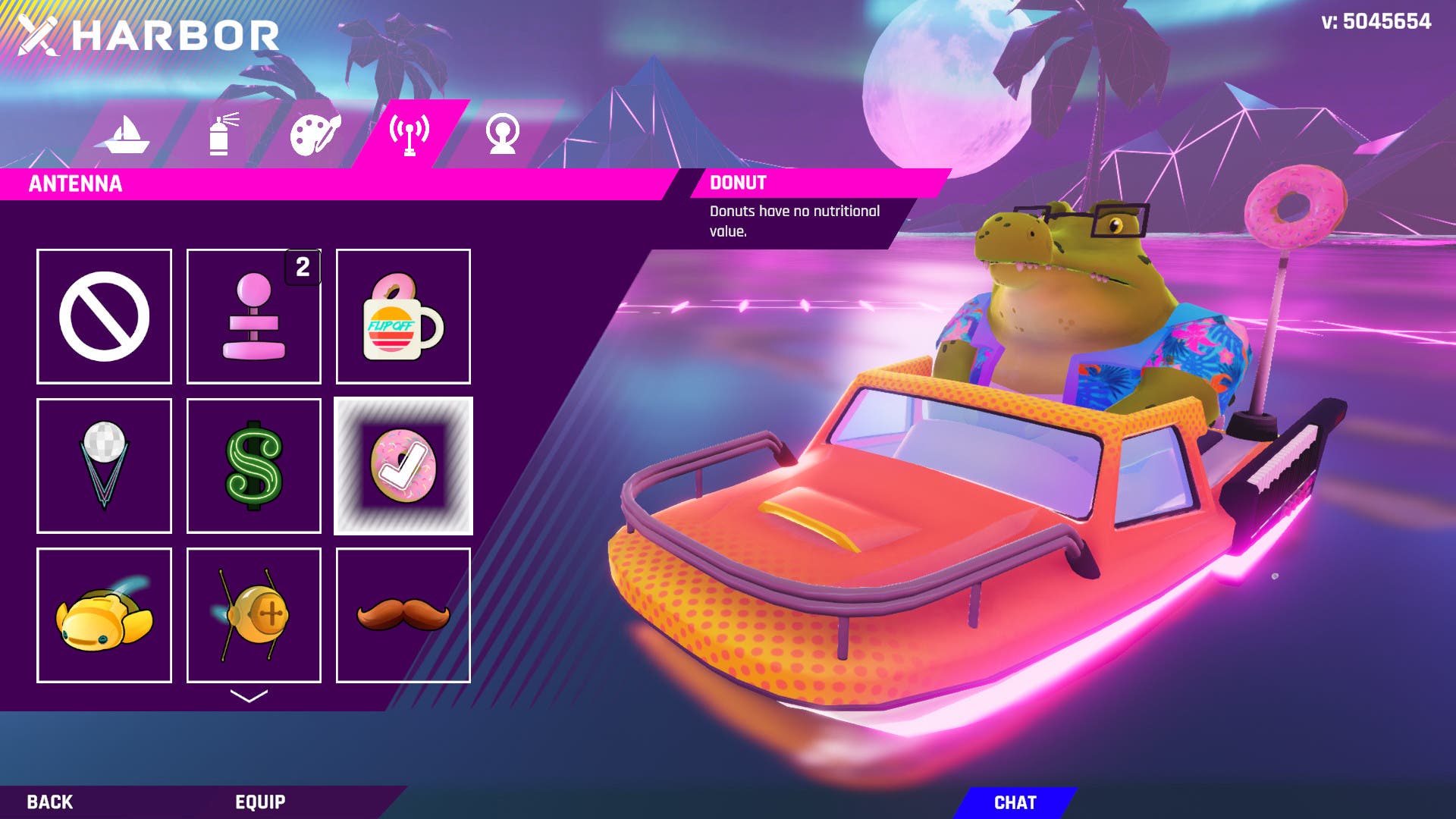 There’s a good amount of customization to be found in the game. Whether it be cosmetic like buying new boats, antennas, or decals, you can make the boat that fits you. Additionally, you can buy clothing items like hats, shirts, and sunglasses to style yourself the way you want. Lastly, you can hit the gym. These allow to also spend the money you’ve earned on gameplay benefits that will increase your stats like jump, speed, grinds, spins, and even toughness to boost your health as you progress online, and off.

Multiplayer does what you expect, while still being really fun. Whether doing free play or trick attack, there’s ways to play with friends that’s a great playground. Utilizing the shooting, is Deathmatch. Take out your frustrations while performing tricks in a really satisfying mode. Now, with the game being limited to only five maps, it’s entirely possible to run out of content early. So this must be why there’s a park creator included with the game to make your dreams reality. It’s really easy-to-use, and I was able to make something interesting in just a few minutes, and publish it to the Steam Workshop. Sadly though, you cannot design a park and create your own objectives for it. 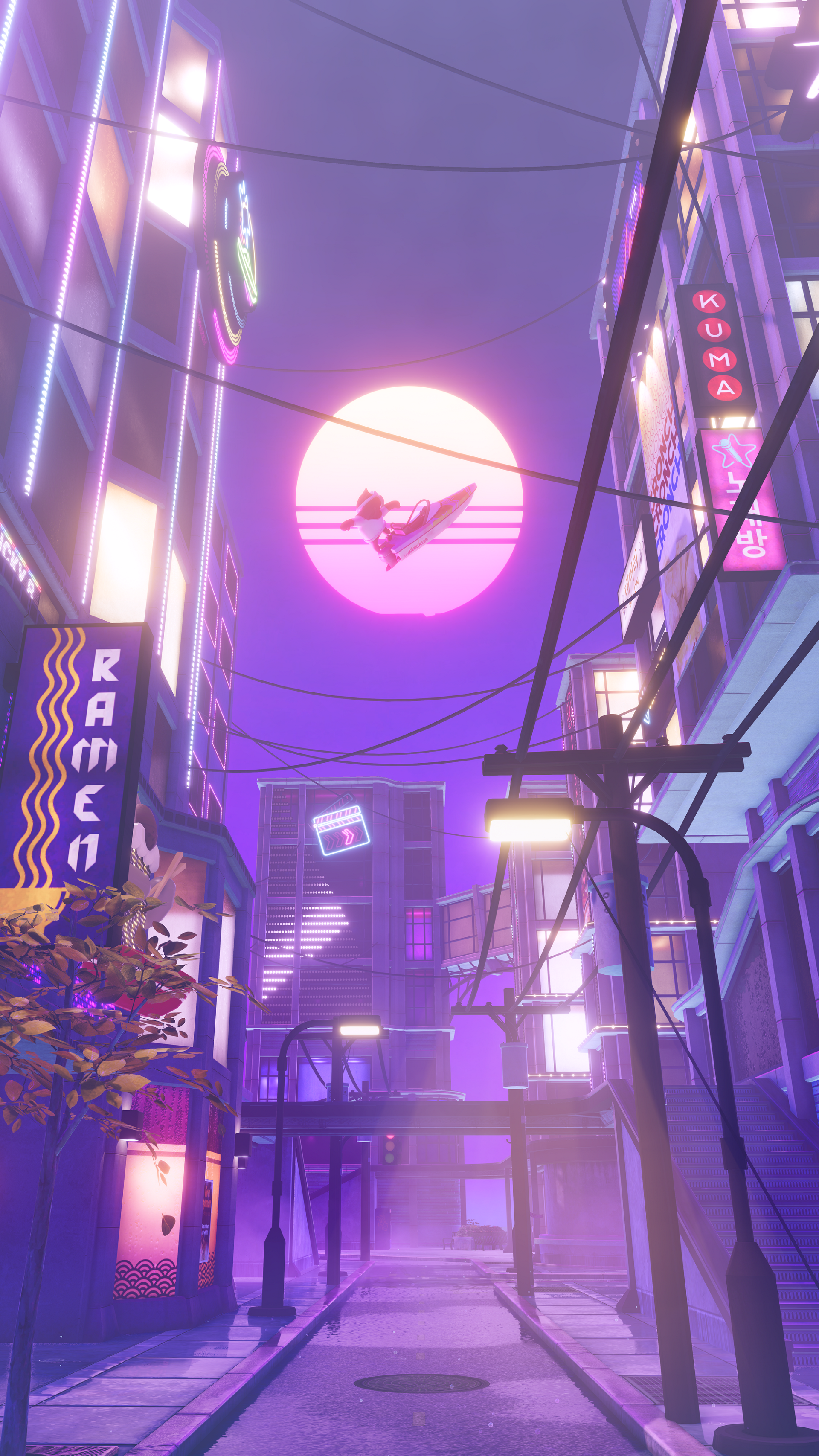 Wave Break is not without some bugs, though. There were a few times where I fell through the world or otherwise got stuck on several pieces of geometry. There are invisible walls that aren’t clearly defined, and leads to a lot of wasted time. Then there are times that the camera gets wily on you, and thankfully there’s a camera lock button that does help keep it in-check. I found that while the UI hits all the right notes, it isn’t as clean as it could be. There’s UI elements that blend in or are disguised against other elements that could be better presented.

It probably goes without saying, but the soundtrack to Wave Break is really good, and every song catchy. It features several retrowave artists such as Orax, W O L F C L U B, and Michael Oakley among many others. Then there’s some original tracks in there, too. Everything about the game just sounds right, and all of the tracks are stream-safe. The aesthetics are overly bright, vibrant, and lush with the retrowave look that it just looks and feels inviting. 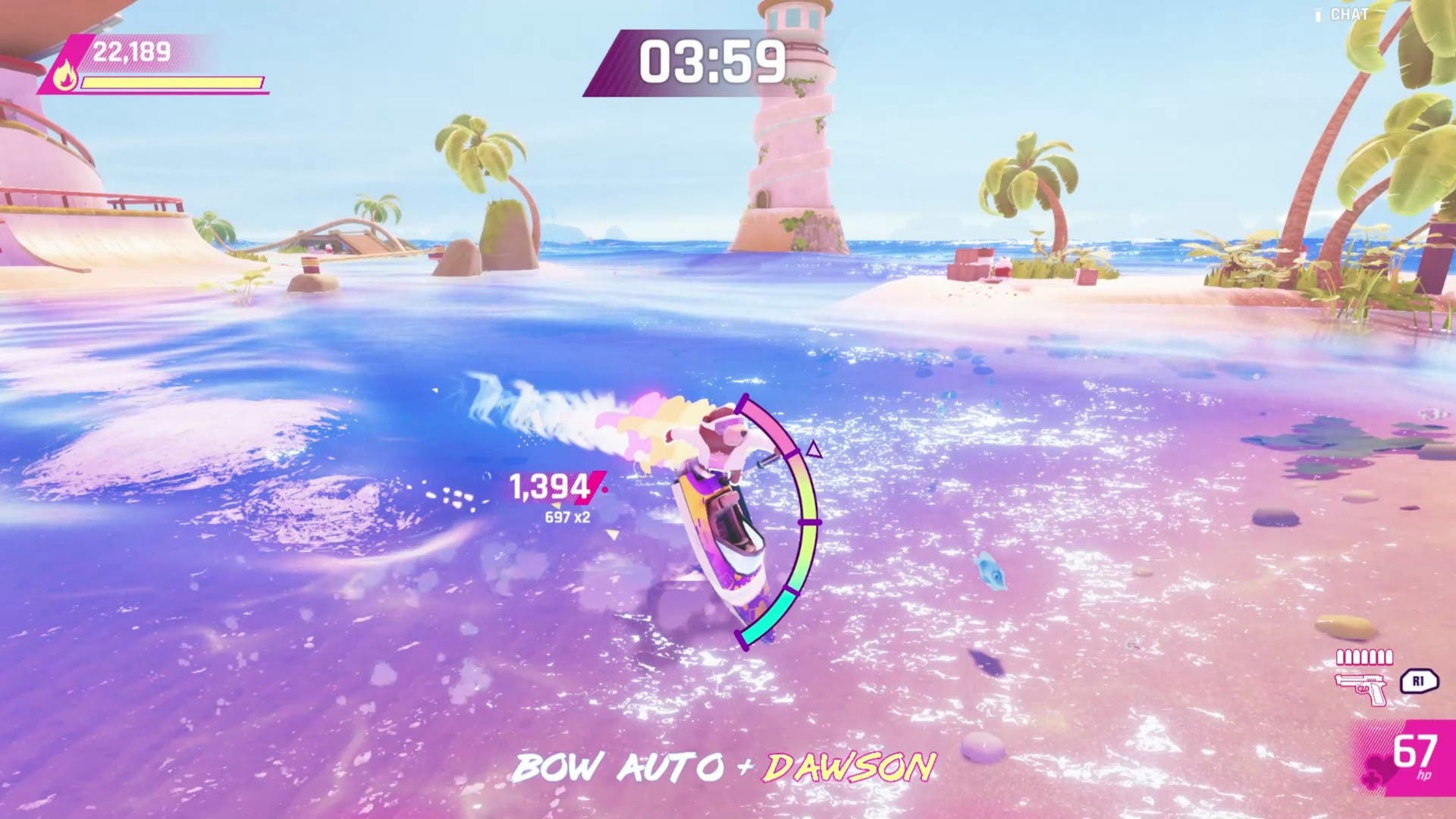 Now that it’s free from the shackles of Stadia exclusivity, Wave Break can now be enjoyed by those on Switch and PC. The game has its foibles, and it’s not as smooth as Tony Hawk’s Pro Skater, but it’s a good time. Funktronic Labs needs to add a ‘quick restart’ feature, pronto. The combination of guns and skateboating amid the bright aesthetics makes for great fun. There’s good reason why I can’t stop playing and trying to perfect each level. If you can’t beat the heat this Summer, then soak up the sun in Wave Break.