Gliding airily between giant leaves and branches, catching an errant gust of wind to carry you across a chasm, and befriending gigantic grasshoppers are not the sort of experiences we ever get to enjoy, but in Stonefly this is just another Tuesday. Piloting a bulky but nimble mech of insect-like design, you navigate the fantastic setting of a gigantic forested world, as a normal-sized human in a very abnormal setting. The world around you is lush and beautiful, teeming with life and equal parts serene and threatening. There is a real sense of wonder as you make your way through the forest and discover new biomes, new creatures, new villages, and lost artifacts; these are the moments when Stonefly really sings. Once you start to dig into the combat and other game play systems, the game is noticeably less satisfying. 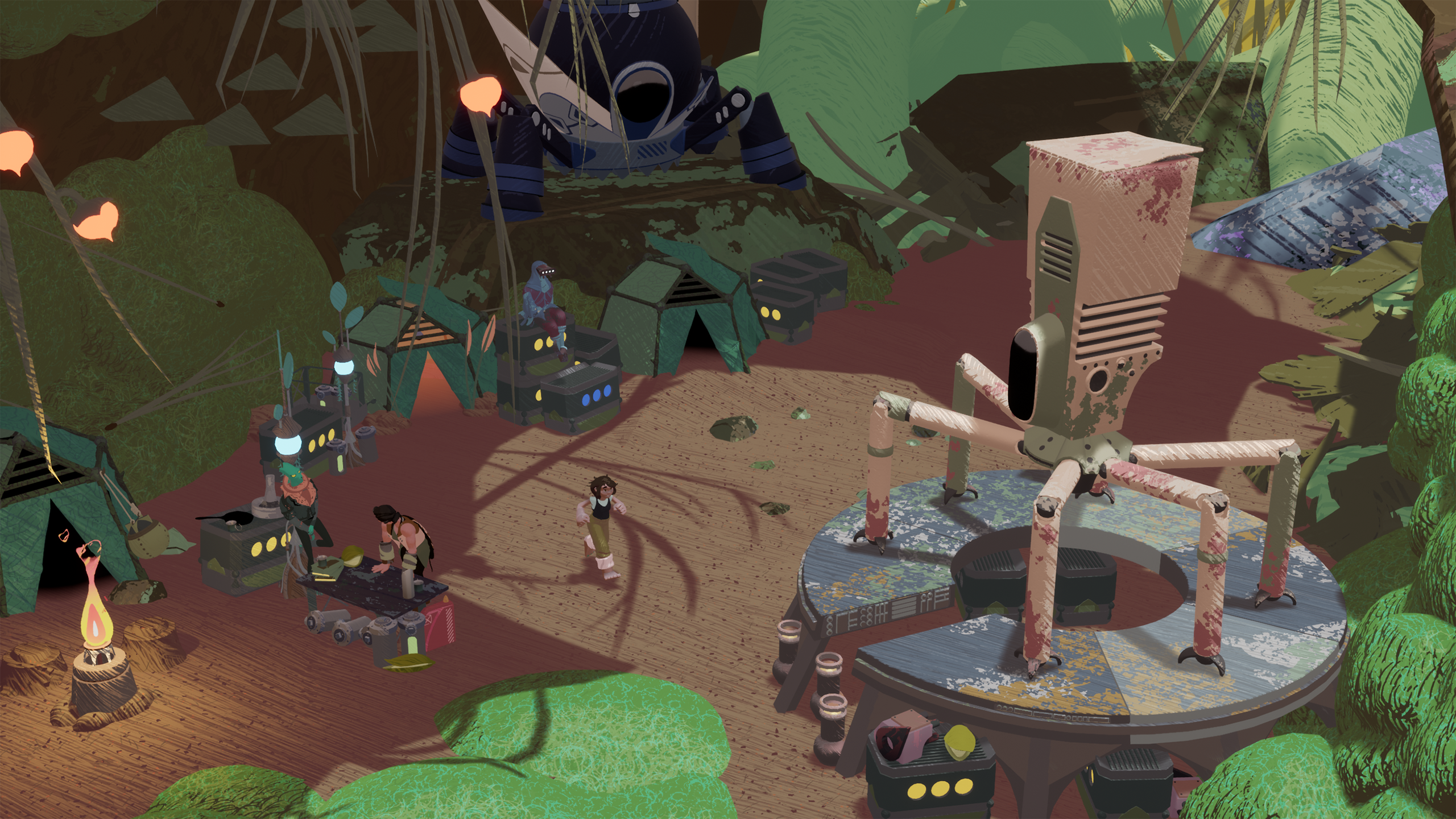 The notion of playing as a shrunk-down human in a larger than life back yard setting is nothing new, and it’s even territory we’ve seen tread recently in a few other high profile games. Stonefly‘s approach is different, though. You play as Annika Stonefly, a talented young inventor who is still learning about the truths of the world, and she is quickly set off on a quest to recover her father’s mech; a priceless family heirloom that she played a direct part in losing. Ever trying to prove herself to her father, she sets off to right her wrong, and so begins your journey through the forest and beyond. In one of my favorite moments of the game, you start off riding on the back of a friendly grasshopper, making your way to a settlement where other adventurers await. After the introductory sequence the game opens with that teaches you how to pilot the game’s mechs, this section is a carefree jaunt through the environment, lazily leaping about and devoid of threats. It’s evocative of children’s movies and is a cute way to open up Annika’s journey.

Shortly after, you are bestowed with a proper mech of your own which you have to repair back into working order, and thus the primary mechanical loop is exposed. While the main pull of Stonefly is to chase down leads that will guide you to recovering the lost mech, what you’ll spend a whole lot of your time doing is harvesting mineral deposits from around the forest, most of which are guarded by exotic insects which are inexplicably attracted to those same shiny rocks, and will defend them with their lives. Any one of these bugs could give you a thorough chomping outside the safety of your mech, but within its hull you are capable of… moderately annoying them away. Stonefly‘s mechs are largely powered by wind, a prevalent natural force which you rely on throughout the game for traversal and combat alike. Your mech’s abilities are all centered around this concept; you use wind to jump extra high and to hover above the ground for prolonged periods. You rain small projectiles on larger bugs from above to stun them and drop to the ground to fire gusts of wind to hurriedly push all of them off the edge of whatever leaf or stone you’re currently fighting on. Practically everything you can do in your mech is derived from wind. Combat arenas are somewhat frequent, and the game walls you in while you’re fighting until the very last bug has been shoved off to land on the forest floor. You’re free to try to collect materials during fights, but the big deposits take time to harvest from and you leave yourself open to attacks, so finishing off your foes first is generally the less frustrating option. Some bugs will steal small amounts of materials and hang onto them, but they leave these bits behind when defeated, so whatever artificial incentive there is to harvest before the bugs can isn’t particularly compelling. Minerals and found objects are vital to the constant cycle of improving your mech, both in the form of unlocking new abilities and upgrading your mech’s core systems and abilities alike. As you play more, you’ll unlock more upgrade options through “research” (which is done automatically by performing specific actions like fighting), and you’ll stumble across plans or even parts you can harvest from derelict mechs.

This gives you some opportunities to customize your loadout and adapt your mech’s abilities to what best suits your play style, which I do really like. Every upgrade or part repair requires spending materials you’ve harvested, and in some cases special items that must be found or purchased. Early on in the game, the balance of materials required to purchase upgrades is generally on point, but you’ll quickly reach a point where you’re discovering blueprints for new additions to your mech at such a rapid clip that you suddenly don’t have enough to build everything without spending extra time looking for materials to gather, which also means extra time spent in combat. 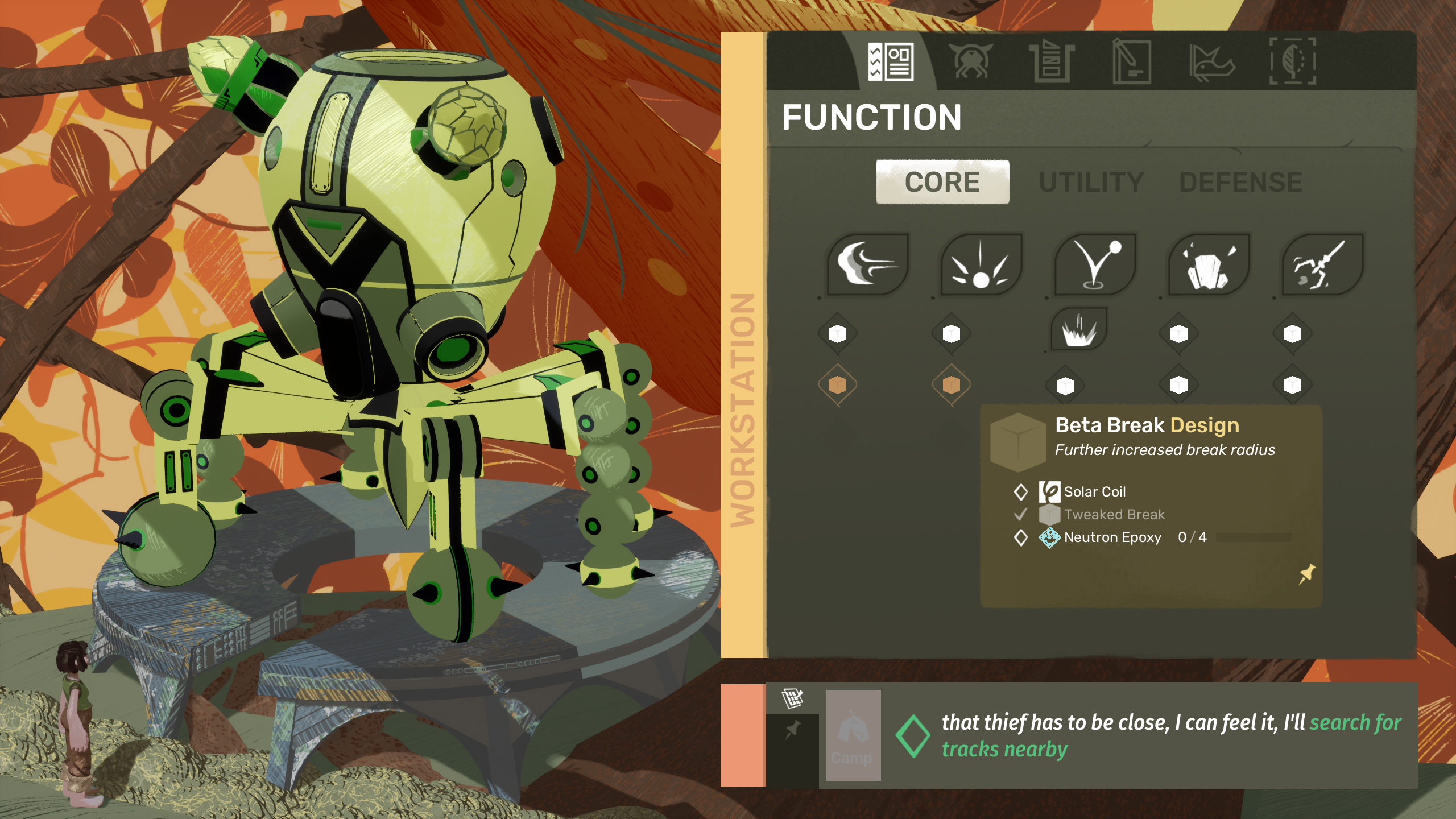 As enjoyable as exploration and traversal in Stonefly can be, the combat never really sat right with me; even as I unlocked bigger bombs and stronger abilities, I always felt like I was fighting against the combat system itself to do anything productive, more than I was even fighting the enemies themselves. This is particularly frustrating considering how agile your mech is and how it can turn on a dime. In theory it should feel really great to control, but fighting in it can often feel cumbersome, which is really more of a shortcoming of the requirements for dispatching bugs, and their programmed behaviors as well. The result is a combat system that has potential to be fun, but falls short of giving the player enough tools to ever feel truly in control of any situation. Perhaps that tension is an intentional part of the design, but given the number of enemies in some encounters, it seems that the balance is off.

Despite some of these systems shortcomings, Stonefly is absolutely gorgeous to look at. It boasts an art style that is a unique blend of flat shading and pencil sketching, giving every scene a layered, textural look that stands out from nearly anything else I’ve ever seen. The effect is almost something that looks hand-drawn or animated, but is also distinctly clean and smooth in a way you would only see in video games. It’s a beautiful effect and honestly the art and visuals, and the way they integrate so well with the concept of the world and its overall design are my favorite things about Stonefly. Even though some aspects of playing the game aren’t totally satisfying, it is always a joy to behold, and to the extent that the strength of the game’s art direction was enough to help carry me through sections where I was slowing down. I’m a sucker for exploration in games; give me a rich, unique world to explore in a beautiful setting and you’ll keep me engaged pretty easily.

I want to love Stonefly. It has all of the right pieces  to make something great. When those pieces come together, though, the fit isn’t quite right, and the resulting whole has its share of holes. This is a game that’s big on concept and playfulness, but translating those qualities into something that you interact with as a player fails to cleanly make the jump. Most specifically, the game play isn’t quite there; the mechanics are all fine, but the balance is off in some crucial ways that disrupt the experience and cause the game to get in the way of itself. Stonefly is at its best when its showing off its beautiful artwork and telling its story, and the parts in between where you fight lots of bugs and gather too many resources feel in opposition to that side of the experience rather than in service of it. I still enjoyed a lot of my time with Stonefly, but this feels like an experience that would have benefited from being shorter, and more focused on exploration and its narrative.