Everything about the tease and build-up for Twelve Minutes since its reveal in 2019 has been shrouded in mystery, and the gameplay maintains this until its final moments. It’s a game with stellar casting and cinematic panache to elevate the circumstances of being caught in a time loop. Time loops are entertaining to watch, but actually more frustrating to play. Similar to “Happy Death Day”, Twelve Minutes is an exasperating affair in trying to break the cycle you find yourself in. There are moments of greatness here, especially when you get into a rhythm, but that happens too infrequently to enjoy fully. Twelve minutes can go by quickly, or feel like an eternity. And unfortunately for Twelve Minutes it’s the latter. 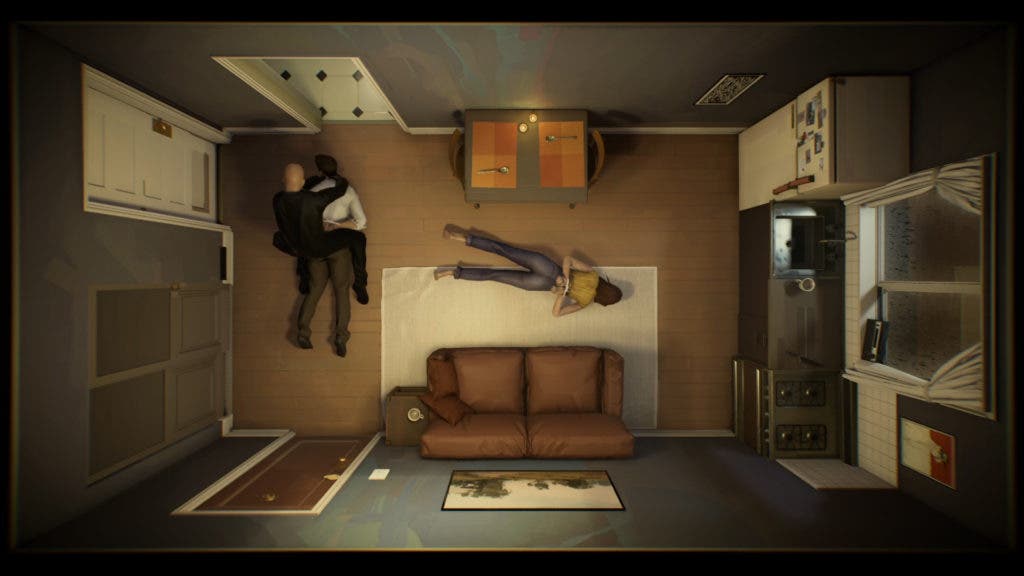 The game begins with the opening of an elevator. Played from a top-down perspective, offers a unique view for what transpires. You’ll wander a hallway, mousing over whatever might be relevant. After finding the keys to your apartment, entering for what is the first of an excruciating number of times to follow. You embrace your wife, converse about the apartment, eat dessert, and hear some big news. After some time, you’ll get interrupted by a lone policeman who barges in to arrest both you and your wife. Questions are then asked about the murder of your wife’s father and the whereabouts of a pocket watch lead to concern as you’re put to the ground. Before anything can be revealed, you’re weirdly strangled to death from behind. Now back at the entrance to the apartment again, your wife is walking out of the bathroom once more, and you’ve been transported twelve minutes in the past.

What follows, is all about listening, learning, and experimenting. Slowly but surely you’ll gain intel helpful for each ensuing reset, to get ever so closer to solving it. There are narrative junctions, that once reached will offer branching paths to take. These branches will eventually take you to a soft ending, or an ending that leads to the restart of the game. Other branches are dead ends, that continue the loop. It’s just that you don’t know these branches are there, so you have to go out on a limb to try them. Impatience starts to set in as you have to wait for the right moment to strike, just see if you can try something else. That experimentation is not always rewarded, though. This results in wasted time, having to hear the same dialogue over and over. The game does give you some courtesies by passing time you don’t need to wait for, such as letting you fast-forwarding dialogue, or advancing time by waiting inside a closed closet. Though these moments are far and few between.

Twelve Minutes’ biggest annoyances are when one tiny mistake like missing a cue or forgetting to turn on a lightswitch can ruin the whole loop. Simply walking out the front door will reset the loop, but it’s a frustrating series of events to get back to where you were when it doesn’t work out. With each loop only twelve minutes in length, there’s added pressure to get things done in a timely manner. You constantly feel rushed. This is the kind of game where you make notes, draw thought bubbles, and eliminate what doesn’t work from the possibilities. There’s fun to be had, because once you reach critical story paths, you are drawn back into the mystery that continues to unfold well past when you think it stopped.

Early loops with little to no information see the man and wife on opposing sides of the arrest, as the man just watches and succumbs to what follows. As the man lets the wife in on the secret of his time loops, along with information he’s gained, see them start to work together and start to plead to tell their side. Seeing these subtle changes over time let you know you’re making progress, but an attention to detail is required. It’s hard to talk about the game in detail without giving too much away. The surprises and twists are worth the experience alone.

None of the characters in-game have names, there’s no other way to reference them other than the titles they are given: man, wife, cop. These seemingly shallow characters are augmented by the Hollywood talent of James McAvoy and Daisy Ridley playing the husband and wife, who do their best American accents to a convincing degree. Willem Dafoe absolutely steals the show as the cop, but doesn’t break the immersion. Their voicework on their own is really good, but the audio stitching could be better. There’s emotional swings in everyone’s delivery where this is most noticeable.

I thought I’d be able to play this with a controller, as their might be some direct control, but mouse and keyboard was way more comfortable with the point-and-click mechanics. Some items aren’t interactive until the game decides that they are. I presume of this is meant to avoid breaking the game in some way, but it’s no less annoying when you discover this. There’s some awfully stilted animations, and you can see the robotics at work and how poorly stitched together they are. At one point, the cop got stuck trying to walk past my body, but just couldn’t do it unless I forced myself to stand up. 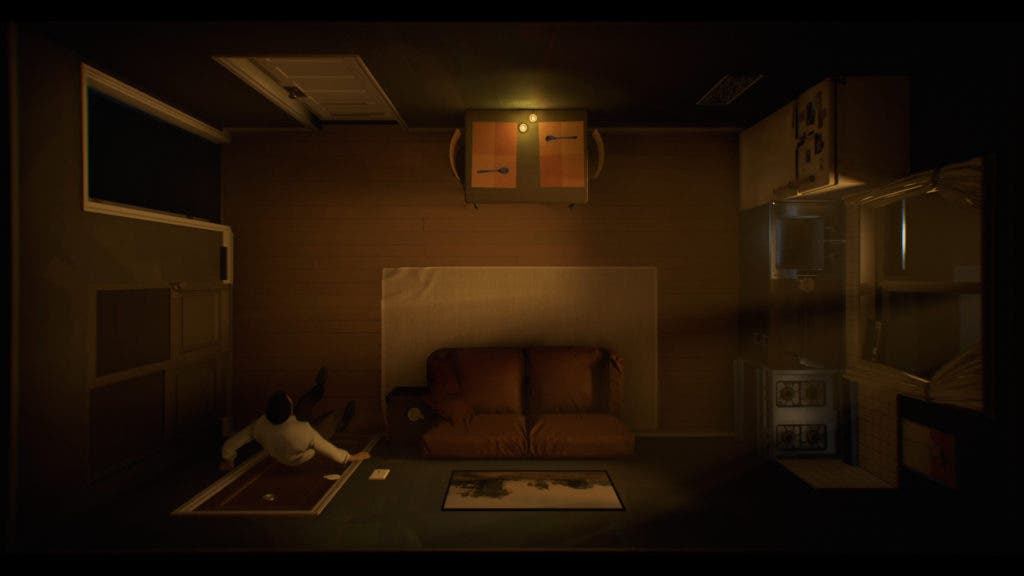 Twelve Minutes is a thought-provoking, intriguing puzzler. There’s a reliance on trial-and-error, even in purposeful repetition that felt painful to deal with. This resulted in reaching points of frustration often, which made the four or so hours feel that much longer. That said, I was compelled to see it through as each new discovery was made. As bizarre as it was, the ending has a swerve I didn’t see coming that I came to enjoy. The game is at its best when either the things you make a guess about or deduce, just work out, and your loop pushes things forward. If you can endure the obtuse design of its puzzles for the unraveling narrative, Twelve Minutes might just be worth playing.