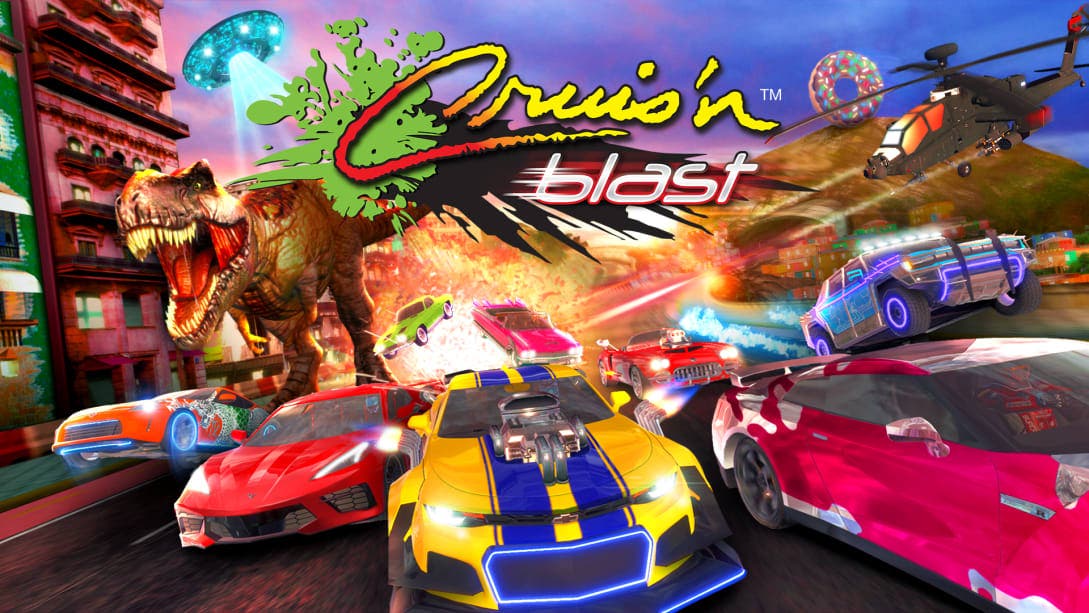 The Cruis’n series is something I constantly refer back to in my comparisons to other arcade racers. The original arcade cabinet and the N64 releases are what I want out of an arcade racing game. I look for cars that a very close to licensed if not licensed, fast courses, and physics that feel tight and responsive. I want the racing to be nail-biting intense, and Cruis’n Blast is precisely that, a perfect example of how good arcade racing can be when handled properly. Cruis’n Blast is incredibly fun to play, and you might say it’s a… blast.

Cruis’n Blast is a resurrection of sorts. The Cruis’n series has been on hiatus for a few years now. The last-named game was released on the Wii in 2007. Although the last good one was probably Exotica in 1999, even the developer, Raw Thrills, ignores that Wii release to state that Blast is the 4th in the Cruis’n series. Blast isn’t a wholly new game, though. Cruis’n Blast was released to arcades back in 2017 and saw some success. The Switch port takes that arcade release and fills the tank per se. On the Switch, players get access to 29 tracks, split into six tours of four races. Each tour focuses on a theme, keeping things interesting. In one tour, you may find yourself racing through only night courses, while another might have you dodging dinosaurs to reach the finish. The themes can be fun and wacky, which a young and innocent little Ed of the day would have found so cool.

The courses themselves can be quite over the top, with things happening all around you. An early race has you in London, and as you pass by the giant Ferris wheel, it becomes detached from its supports and will roll down the racecourse, causing some on-track mayhem. There are many stage-related spectacles like this peppered throughout the game’s courses, and each time you drive through them, they feel just as exciting as the last. 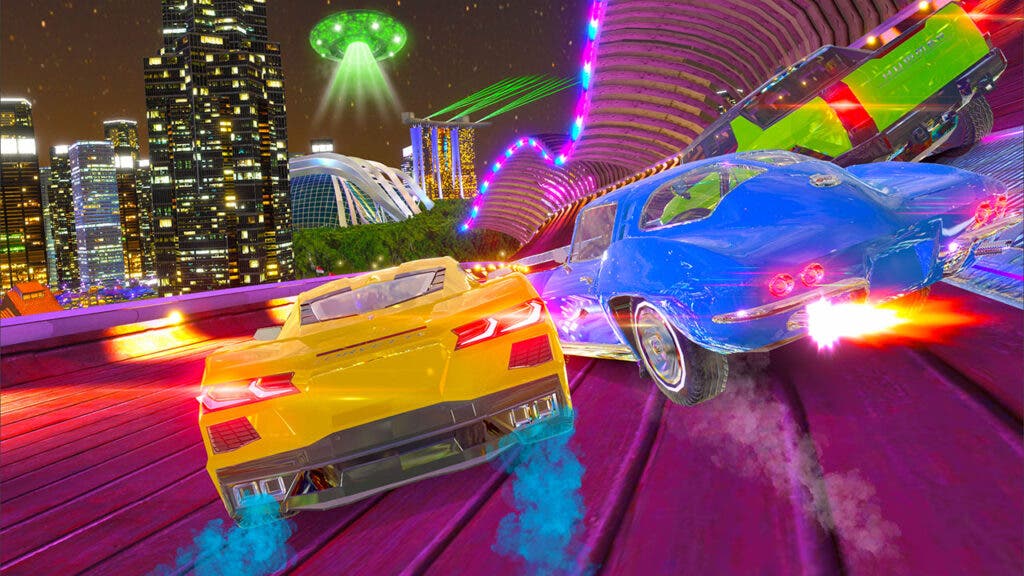 Graphically the game looks gorgeous for a Switch game. It has to be the best-looking car game out on the Switch right now, short of something like Mario Kart. Car surfaces are reflective or extremely shiny with the chrome paint options, vehicles are modeled accurately to their real-life counterparts and reasonably detailed, and the tracks themselves look full and lively, unlike other racers I’ve come across on the Switch. The game does attempt to hold 60fps, but there were some spots where dips can occur. It didn’t bother me as they hardly make the game unplayable, but do be aware that they happen.

If you know me, car physics and handling are critical to me. Whether it’s simulation or arcade, the car has got to feel good in my hands. I’m pleased to report that Cruis’n Blast feels excellent to drive, even on the Switch’s tiny Joy-Cons. To help navigate turns at a faster pace, you’ll want to take advantage of the game’s drift mechanic, as it is wonderfully implemented. It’s very reminiscent of Mario Kart but without the little hop. Like Mario Kart, a drift will net you a slight boost if you come out of it without hitting a wall. Also, over the years, a staple of the Cruis’n series has been wheelies and tricks. You’ll be pleased to know that both of which you can accomplish in Cruis’n Blast. Performing wheelies and doing flips over jumps and ramps will also net you a slight boost. What I found particularly interesting for Cruis’n Blast was its inclusion of licensed cars. Previous Cruis’n games modeled their cars after popular cars of the day but came short of actually licensing them. I was excited to see that most of the starting vehicles were licensed. Though, being a Ford fan through and through, it was tough to find out that most are of GM branding, but things do open up later, giving you access to supercars like Lamborghini and straight-up wacky rides like an actual unicorn and shark. It’s these out there wacky inclusions that add to the game’s fun factor. They know what Cruis’n is, and they’re not afraid to get out there and have fun with it. To unlock additional vehicles, you need to complete tours and find three hidden keys on each track. In addition, every vehicle is customizable with different colors and parts, parts that are unlocked with continued play.

It’s this vehicle unlocking and customization that will give the game some extended time in your Switch. If you want to 100% the game, you’ll have to find over 85 keys and will want to get gold trophies on every track in each of the four difficulties. So, there is quite a bit to focus on if you’re a completionist. Along with that, though, what’s an Arcade racer’s shelf life without multiplayer? Cruis’n Blast does include split-screen for up to four players and local wireless play. But there is no online play to partake in for those who are not around their friends in person. Speaking of the split-screen, I couldn’t test four players, but the framerate held up surprisingly well when racing with two. It is very playable as a split-screen endeavor, something the Switch has struggled with in other titles. 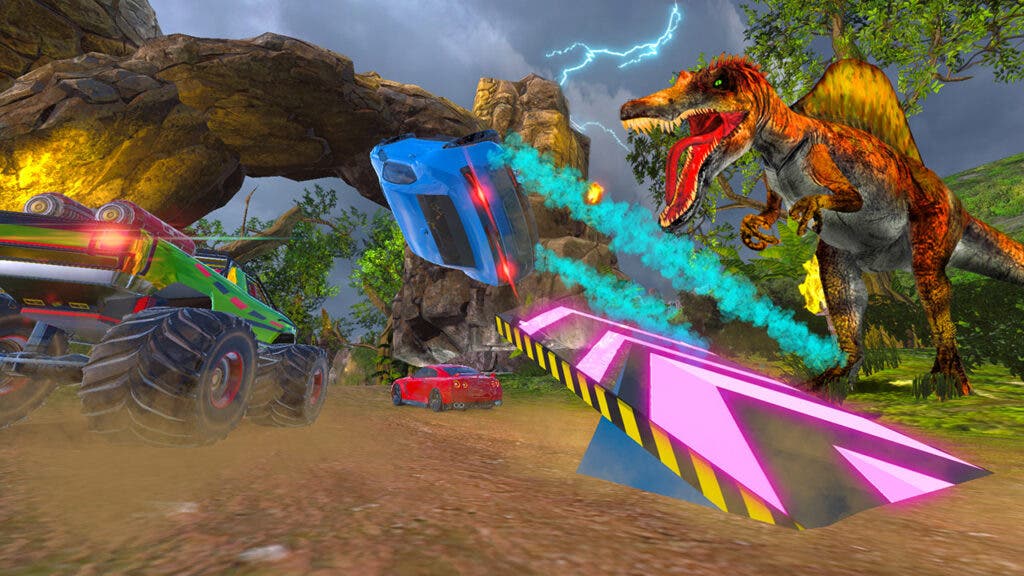 As I mentioned earlier, Cruis’n Blast is exactly what I want out of an arcade racer. It’s fun, it drives well, it’s over the top, and it’s arcade racing in its near-perfected form. The only way this could be better would be Raw Thrills shipping the arcade unit to dock your Switch in.