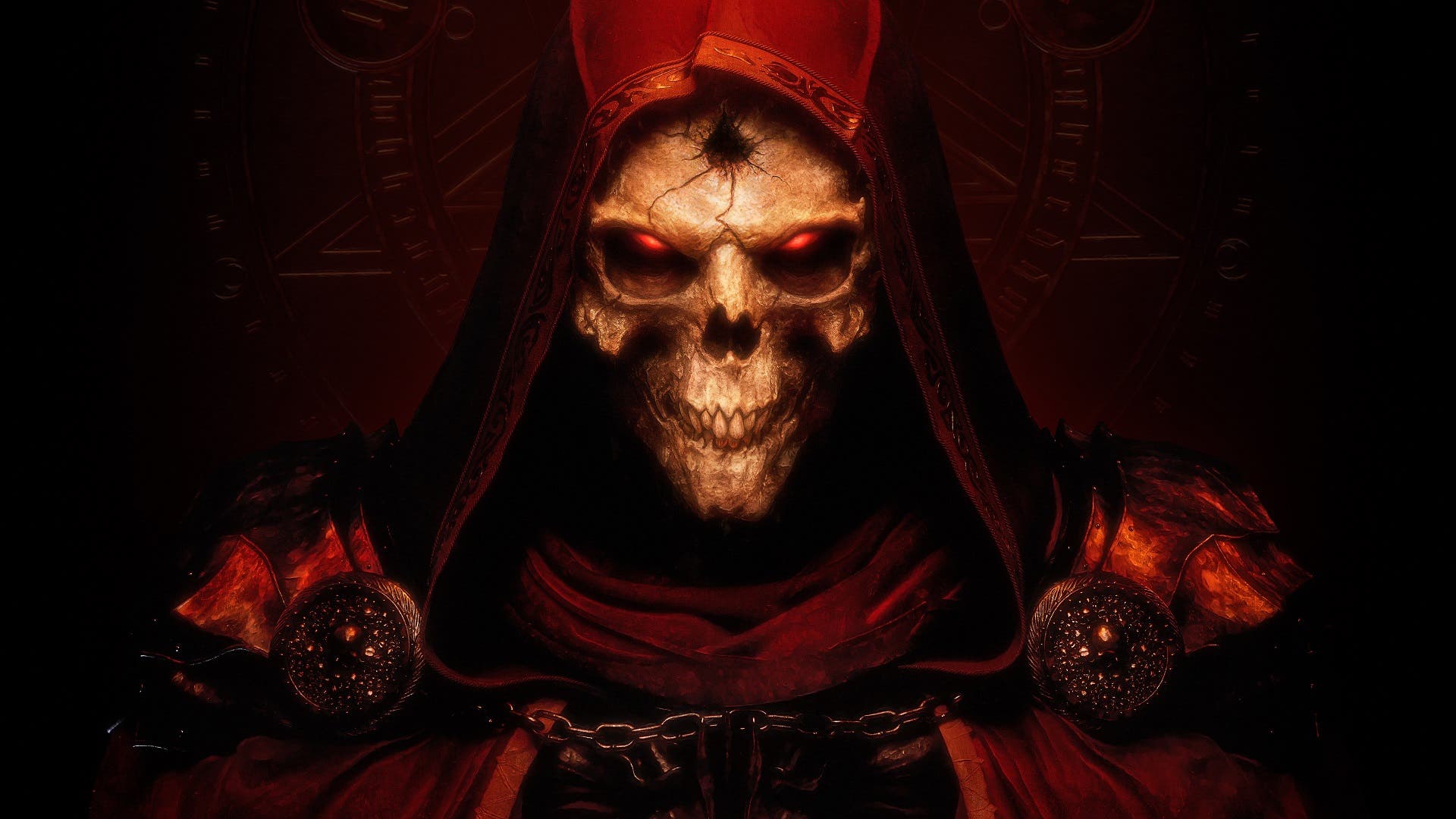 After receiving my monthly PC Gamer magazine with the included demo disc in the mail, I excitingly ripped it from its plastic and installed the Diablo II Demo. It was my first introduction to the isometric action RPG genre, and I was immediately enthralled. It wasn’t long until I bought the full game, and has been one of my favorite kinds of games to play. With the release of Diablo II: Resurrected, I’m able to relive those moments from 21 years ago, as it’s a complete remastering of Diablo II and its only expansion, Lord of Destruction. This remaster is everything you’d want it to be, and more; offering an uncompromising experience for veterans, and a stiff, but great introduction for newcomers. 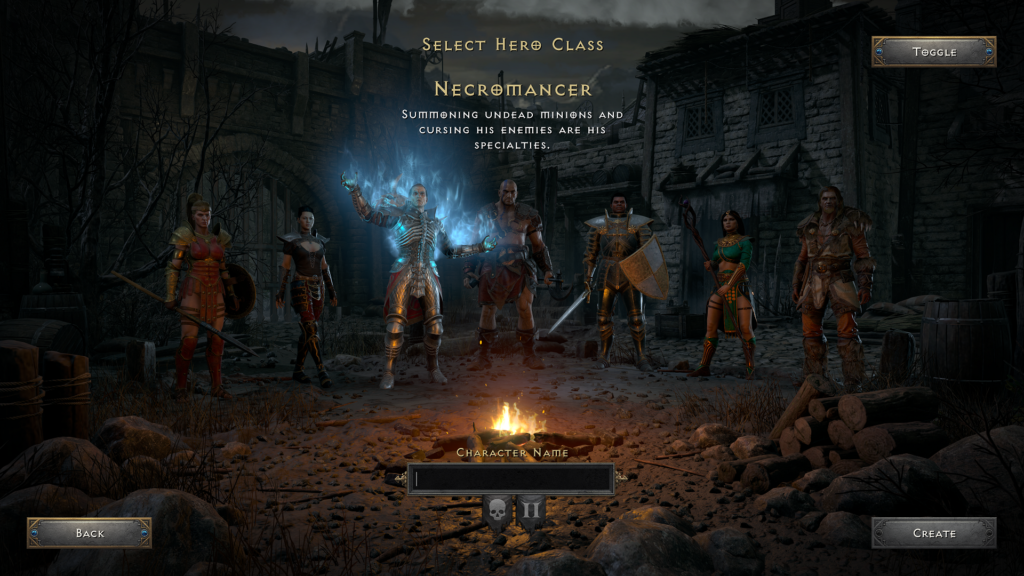 Editor’s Note: We are aware of the ongoing lawsuits and investigations into Activision Blizzard with the issues of harassment and abuse of its staff over the years. This review is to support the developers at Blizzard who: continue to work there amid the controversy and have spoken out about the issues that have plagued the company for too long.

The first thing you’ll notice about starting the game is that the cinematics have been completely rebuilt. With that incredible Blizzard quality, the cinematics are shot-for-shot remakes of the original, with more detail than you ever would have dreamed back in 2000. The neatest feature is that you can swap between the original and the remastered graphics at the press of a button – which is “G”, for Graphics. This even present at the main menu of the game, offering an visual experience that can be just how you remember. Resurrected is not afraid to show you its immense detail, zooming in on the character select screen, and letting you zoom in closer to the action in-game. A whole host of accessibility improvements doesn’t compromise on the vision of the game. It’s a visual marvel, and the changes are all done in the periphery, seamlessly integrated.

This is the same Diablo II that you know and love, and it’s largely untouched. With a total of seven classes to play as: Amazon, Necromancer, Barbarian, Paladin, and Sorceroress. The remaining two other classes come from the Lord of Destruction expansion: Assassin and Druid. The final part of the game takes place in the Barbarian Highlands for Act V, offering snowcapped mountains and icy caverns to explore. It’s a crescendo worthy of its praise. There’s an infinitesimal number of hours here to spend leveling up each character class to the fullest, and finding the best and rarest weapon and armor sets in the game. 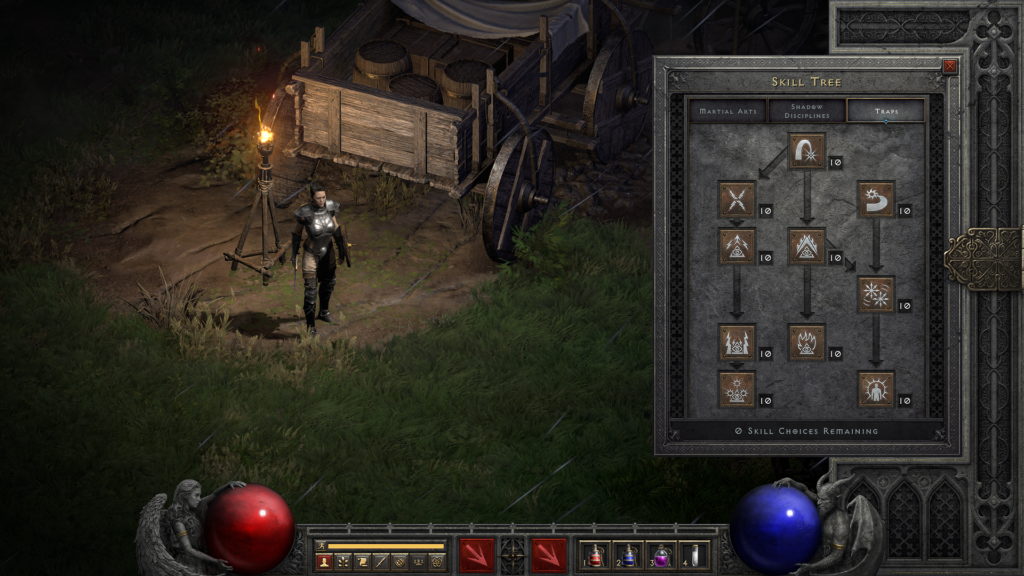 The game’s story is told from the perspective of Marius, and his blind following of The Wanderer, who is the warrior of the original Diablo. It’s worth noting that unlike Halo: The Master Chief Collection, you can’t swap between the new and old cutscenes at-will. Anyway, this then sets up the need to stop the further spread of evil. After the introductions are over, you’re off with the character of your choosing to do some questing to stop evil. Though maybe don’t play as a Barbarian as you’d wont to do, as they’re very gear-dependant and slowest to progress through the story. No matter what you play as, you’ll be slaying demons with impunity, and earning experience all along the way to Hell. That experience becomes skill and attribute points that can be spent in a particular focus to make you more effective at doing the aforementioned killing.

The progression of the game is rather linear, despite the freedom you have within a level to explore as you please. There’s a total of six quests per act, with the exception of Act IV which has only three major quests to follow. Each act has a distinct look and feel to it. You’ve got Act II that draws inspiration from Egyptians. Then there’s Act III is inspired by the Aztecs. The game is very dark, only with splashes of light throughout to give hope at the end of the tunnel. There’s nine waypoints to unlock, making your travels easier for boss runs or more advanced endgame content as you run through again and again on harder difficulties on your way to level 99.

If you’ve been playing the original Diablo II for the past however long, you can import your original saves into the new game. There’s also the ability to turn off the expansion content altogether. One reason you might do this is for a smaller inventory to work with, or removing charms from the game. The Lord of Destruction expansion is really good, though it has its detractors. Charms have to be in living in your inventory to work, which changes how you play the game, as it’ll be even more limited. Being able to exclude these features are a really smart decision. All of the build guides and information you can find on the internet from 20 years ago, is still relevant today. Meaning, there’s a huge resource to learn about the game and its systems to become more effective at character building.

Death is not the end in Diablo II: Resurrected (unless you’re playing on Hardcore, then it’s permadeath). After death, you will drop all your gear and gold at your feet, and be resurrected at the nearest waypoint. From this point, it’s a corpse run to retrieve your gear, and fight the demons around it to get it back. Worry not, for if you die again, nothing is lost, and you’ll have to fight for it again. Gems can be placed into sockets for improving statuses, but runes also do this. Combine one rune with another rune to create powerful runewords which can have incredible effects. The hardest thing to get used to was how swapping between your abilities works. You assign them to F1 through F8, which will equip it to the left or right mouse button. It’s inelegant for sure, but changing this would be upsetting to a great number of people. 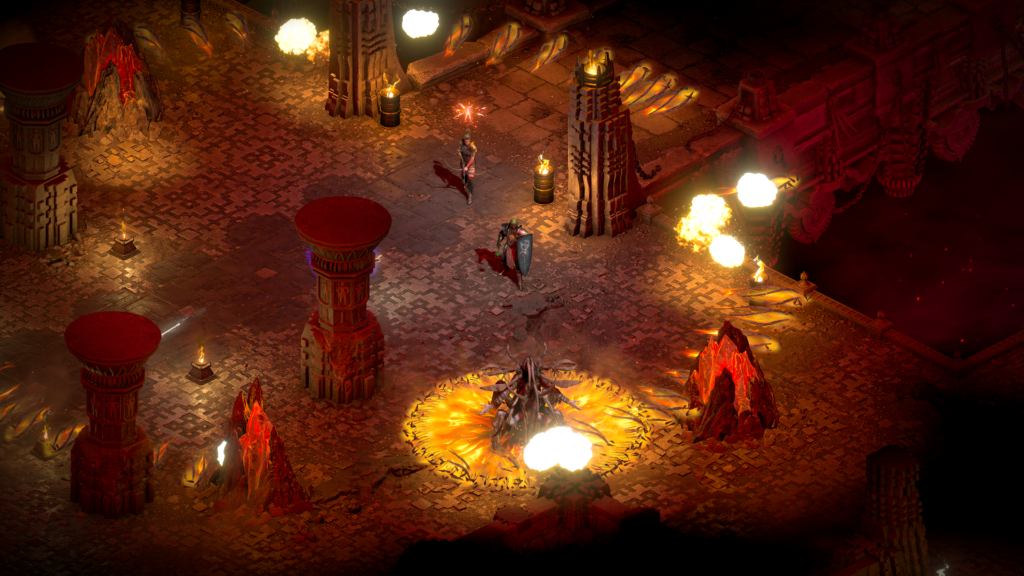 There are two types of characters to create in-game: online and offline. Online characters are synchronized with Battle.net, which can also be used for cross-platform progression. Offline characters are just that, saved locally and should be used for use with mods. Unfortunately, you can’t clone an online character into the offline mode, for reasons unknown. While the inverse makes sense, the former doesn’t. A word of warning, it’s incredibly easy it is to delete your character. From a UI perspective, it’s far away from a most other buttons, but there’s no confirmation text to prevent accidental deletions. Hopefully this’ll be fixed in an upcoming patch.

Aside from the Battle.net improvements, there’s no features or achievements to be had. This falls in-line with how Warcraft III: Reforged and StarCraft Remastered worked for their respective remasters. They’ve allowed you to switch the visuals on-command, included quality of life improvements, and added better Battle.net support. None of it this is disappointing, Diablo II is a game that has been going twenty years uninterrupted. A modern set of features to increase replayability is not something this ever needs. 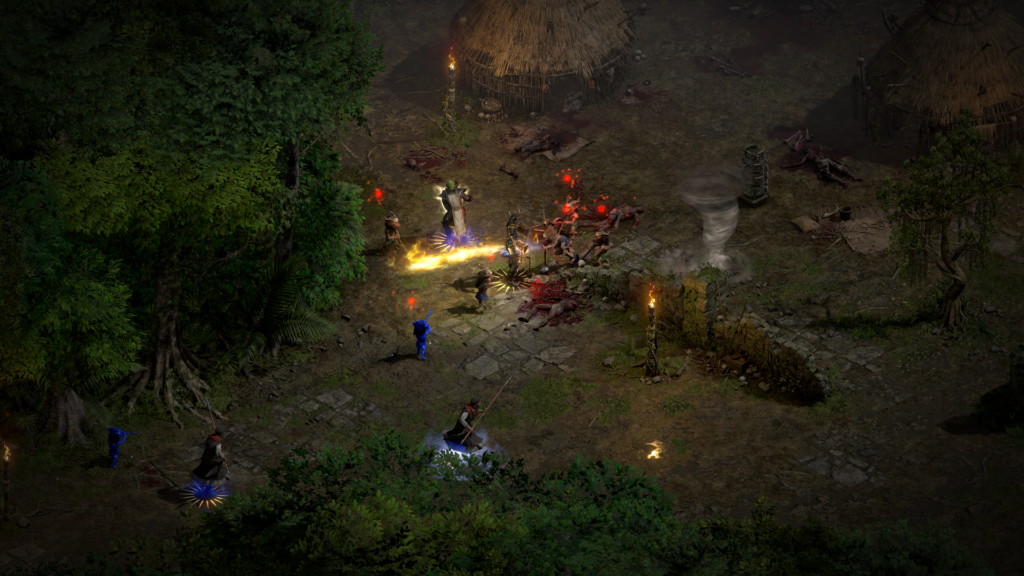 It goes without saying that Diablo II has unparalleled atmosphere. It’s dark, foreboding with death around every corner. The muted color palette, when compared to Diablo III is most noticeable. There are colors, and they’re saturated and pop when it comes to conveying cold, poison, or fire. Even still, the game conveys colors when magic is literally bring light into the dark that’s been cast upon this world. Whether you enjoy the new, remastered visuals at high framerates, or the classic graphics at 30fps, this game has mood. And the remastered visuals are gorgeous and grim. 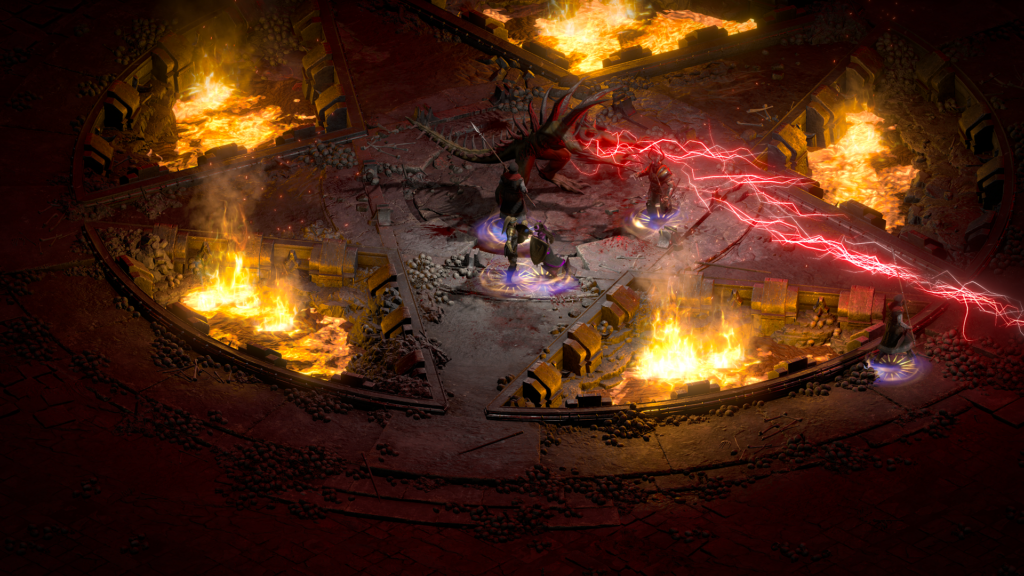 Blizzard had to strike a careful balance of changing just enough, but not too much, which is no easy feat. Though in a lot of ways it feels like unearthing a relic like that in which you find during your dungeon-crawling exploits. Its dated design is solved by its sequel or other games within the action RPG genre. Diablo II: Resurrected has the same deep customization it’s known for. In addition, the new visuals modernize it for both PC and consoles. No matter where you play, this is the best version of the classic dungeon crawler. This remaster made in such a way to ensure that Diablo II: Resurrected is played for the next 20 plus years.

A Battle.net code was provided by the publisher for review purposes