Marvel’s Guardians of the Galaxy Review

Marvel has a vast roster of heroes, and in the video game space, we’ve mostly stuck to those here on Earth. With Marvel’s Guardians of the Galaxy, Eidos-Montréal is taking us for a ride into the cosmic parts of the Marvel Universe. But with Square-Enix’s own Marvel’s The Avengers encountering mixed feelings since launch, a shadow looms over the Guardians title. Let me shine some light and ease some concerns; Guardians has NO multiplayer and has NO live space. What it does have is exceptional storytelling and gameplay that works well with the team aspect.

Marvel’s Guardians of the Galaxy is a single-player, story-focused experience, one that took me roughly 22 hours to complete. That may sound short to some, and I was surprised at how low that number was. Guardians does such a fantastic job at storytelling that it honestly felt closer to a 50-hour experience. We join the Guardians post a big space-wide war. Not directly after, but some time has passed. The team comprises the current Marvel Cinematic Universe roster of Star-Lord Peter Quill, Rocket Racoon, Groot, Drax the Destroyer, and Gamora. At this point in their career, Gamora is the most recent addition, and we can tell the team is still relatively “green,” and I’m not talking about Drax and Gamora, ha…ha. The narrative will take you through a universe-wide threat building up your team’s confidence and reputation along the way. There are some fun cameos and fan-service additions littered throughout the story, and the ones I recognized each put a smile on my face.

You’re placed in the shoes of Peter, and you’re doing your best to lead this team of misfits. One of the things the game does well is making you feel like a leader. There will be times where the crew is relaxing on their ship, the Milano, and you’ll want to talk to each of them. You’ll get insight into an upcoming mission, discuss a previous mission, hear some comments about other teammates, or hear out concerns they may have. As these discussions carry on, you may be asked to choose a response and your responses matter. What you say can and will affect how the story or missions play out. It feels like they take some cues from Telltale games in that regard, even to the point of on-screen prompts that will essentially say “____ will remember that” For example, an early mission requires the team to get quick cash by delivering a “monster” to Lady Hellbender, a monster collector. The team brainstorms how to capture one on such short notice, and Groot offers to be the “monster.” Drax, who is enamored with Hellbender’s mythos, believes that Rocket would make for a more fitting beast to present. The team is split half and half, and it’s up to Peter to decide. Depending on who you choose, you will have very different results in your next mission. In fact, there are times throughout the game where if you don’t make the right choices, you could end up not having much-needed help to complete tasks, leading you to do things the hard way.

These leadership decisions don’t only occur on the Milano though, these prompts will pop up anywhere in the game, mainly because there is banter going on all the time. This team feels like a team. They are always chatting, discussing the current situation, ribbing on one another, or complaining about each other. You’ll find them talking on the ship, while exploring an alien planet, or walking down a marketplace; these guys are always talking to one another. I could see how some may react unfavorably to the amount of talking, but there is so much recorded dialogue that there were only a few times I had heard repeated lines throughout the whole game. The lines that repeated the most occurred during combat. Where orders were barked out or teammates assessed the fight as it was progressing, you’ll hear the occasionally repeated sentence here and there. 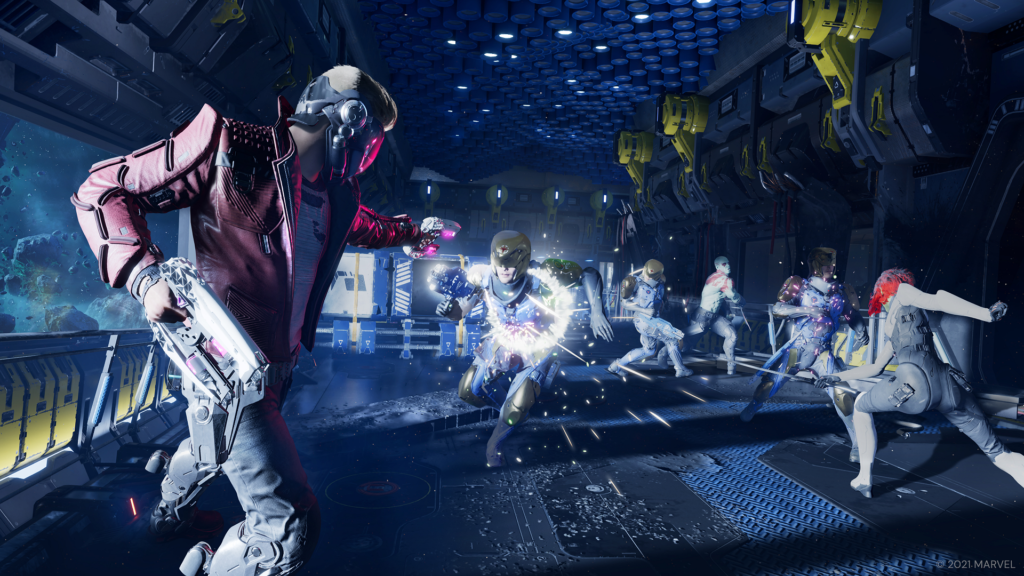 Speaking of combat, Guardians does handle the team combat aspect in such a neat way. You only play as Star-Lord, so your focus is on using your dual elemental blasters to shoot enemies. But since you’re team leader, you are expected to give orders to each team member. Holding down a shoulder button slows down time and brings up a radial menu to select a team member. From that menu, you press one of the face buttons to select which teammate you want to give an order to. That will bring up a second menu of the same face buttons for you to decide what attack they should use.

At first, everyone only has one special attack unlocked, but everyone will have four at their disposal by the end of the game. When you’re not commanding the team, they are attacking independently, so they won’t be standing around with nothing to do. I enjoyed the combat; not only was it fun to do combos and dodges as Peter, but being able to mix in the special attacks from the team hammered home that leadership aspect of you being Star-Lord. They’ve included a mechanic where you call your team for a pep-talk huddle to put those final touches on the leadership feel. You’ll find a momentum gauge that will fill over over time in battle; once it’s full, you slam the two shoulder buttons down, and Star-Lord will defiantly raise his cassette player in the air, calling his team in for a huddle. The group discusses how they’re feeling about the fight, and it’s your job to choose the correct response to their concerns and “rally the troops.” If you pick the right answer, everyone on the team, yourself included, gets an attack buff for the next few minutes. Plus, a song from the wonderful 80’s inspired soundtrack will play as you battle. You don’t know yet how good it feels to come out of that huddle, powered-up, blasting fools to Bonnie Tyler’s “I Need a Hero” or Billy Idol’s “White Wedding.” 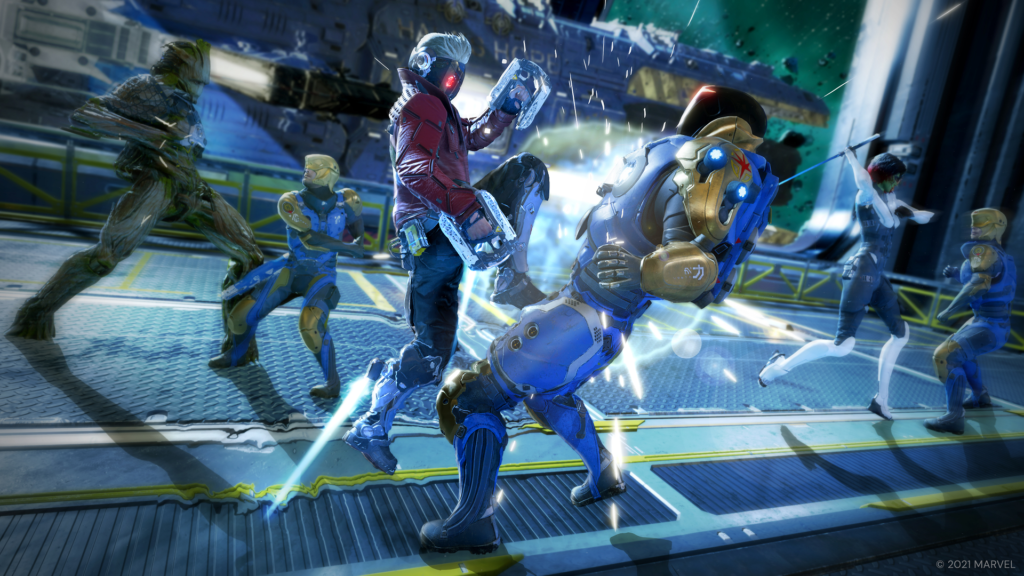 In-between combat scenarios, you’ll be navigating levels alongside your team. It’s during these exploration parts that you’ll find canisters to collect to upgrade a “tech-tree” of 15 items for Star-Lord to enhance his skills. You’ll also come across hidden boxes that contain new costumes for your team. There are a lot of costumes for each team member, and they weren’t too difficult to find if you explore a bit. Sometimes you’ll even get a silly little dialogue quip from the crew about how you’re going to wrong way or how they think you’re running away.

These exploration sections are very platform-heavy, with many jumps and environmental puzzles to solve. You’ll unlock elemental blasts for your blasters that will open up even more ways to solve puzzles, from melting ice to electrifying gates. Most of them are not difficult, and even if you find yourself getting a little lost about what to do, your team will make comments and offer suggestions to lead you to the right solution. I do want to touch on how Eidos-Montréal has done a magnificent job when it comes to accessibility. One look through the accessibility menu, and you can tell they want everyone to enjoy this game. You have your standard control adjustments and toggles for buttons presses or holds, but what got me was how you could customize your difficulty. There are tiered sliders that you can change for individual aspects like how much damage you receive, how much damage you can give, and how much slow down the game gives you when assigning orders to your team. That last one, you can go from a full-on stoppage of time to no slow down at all. I played on the medium setting but knowing that they have a plethora of accessibility options there so anyone can play is beautiful to see.

The game captures the 80’s, rock-inspired, tone that the James Gunn movies have encapsulated so very well. Being that Peter is a child of the ’80s, his choice of music is metal and rock. The soundtrack is full of some 80’s bangers that you’ll be able to listen to on the ship or will pop up during battle. The game features 30+ classic ’80s hits from artists like Rick Astley, KISS, BLONDIE, Mötley Crüe, Def Leppard, and many more. They even included an entire album for the fake 80’s band created for the game.

If I had to fault this game for anything, it would be that I felt the game was coming to a close on at least two occasions, only for it to continue for another chapter or two. I was glad to be getting more story, but with the way things felt like they were wrapping up, it was a bit of a jolt to be like, “oh, there’s more.” I also would have liked the option to toggle which songs would appear after a successful huddle. I would have wanted to remove “Don’t Worry Be Happy” from the playlist for those scenarios. I enjoy the song, but it doesn’t fit in as a blood-pumping fight tune.

Marvel’s Guardians of the Galaxy is up there as one of the best experiences I’ve had all year. I compare this to the excellent Marvel’s Spider-Man, and he’s my all-time favorite character! A title I hold in high regard. Don’t hold out for these heroes; you’ll want this one in your collection.