Boy! It feels good to have more PlayStation games on PC, though I’d like to see PlayStation 5 games and not just several years old PlayStation 4 games. Santa Monica Studio re-invents Kratos and the God of War mythos to an exceptional degree, while still having threads tie back to the original series. Every element of God of War is so carefully thought out and well-executed. It’s all punctuated by punishing combat and powerful moments that simply have to be experienced for yourself. Nearly four years after its original release, those who don’t have a PlayStation for one reason or another can now enjoy it. God of War is an essential PlayStation game that’s now an essential PC game, as well.

Billed as a soft reboot, God of War picks up with Kratos living a simpler life, now with a new family to call his own. He’s clearly no longer in the Mediterranean and has settled somewhere in Scandinavia. The storytelling is modern, with a camera that never cuts to another angle, and feels like a single camera crew documenting the adventure. The big question looms as to how Kratos arrived here, and you’re desperate to find out more as soon as possible. It trickles the details slowly but surely as you work your way through the campaign. Surprisingly, Kratos’ relationship with his son Atreus is both heartwarming and fascinating, as we’ve never seen this side of him before. You’re immersed in everything that’s going on to learn more about every character.

This game knows what it is, and doesn’t shy away from introducing you to combat almost immediately. When God of War originally released in 2005, that was a series that played like the Devil May Cry games. Blisteringly fast combat with combo chains for ratings and bragging rights. With God of War, it’s the inverse of that. Combat is now slow, deliberate, and methodical, close to how Dark Souls games play. While there’s no stamina meter governing how often you can attack, it’s about reading enemy wind-up attacks, not getting surrounded, and using the right weapon for the job. Kratos’ axe is the first thing you’ll get your hands on, it behaves similar to Thor’s hammer in that when thrown, you’re able to call it back. It absolutely does not get old, never, as you’re doing damage to enemies outbound and inbound. You’ll carry a shield that deploys in spectacular fashion and incredible timing to perform parries. Lastly, you’ll build up anger from all forms of attacks, and collecting enough will let you unleash Spartan Rage. A callback to the prior games, is clearly still with Kratos after all this time, letting him dole out fists of fury with unmatched fervor. Atreus, while young and inexperienced, will aid in combat by shooting arrows at the enemy. It’s for small damage, but big distractions that let Kratos do major, uninterrupted damage. A whole swath of upgrades and abilities that further enhance the experience that let you handle every situation you encounter. 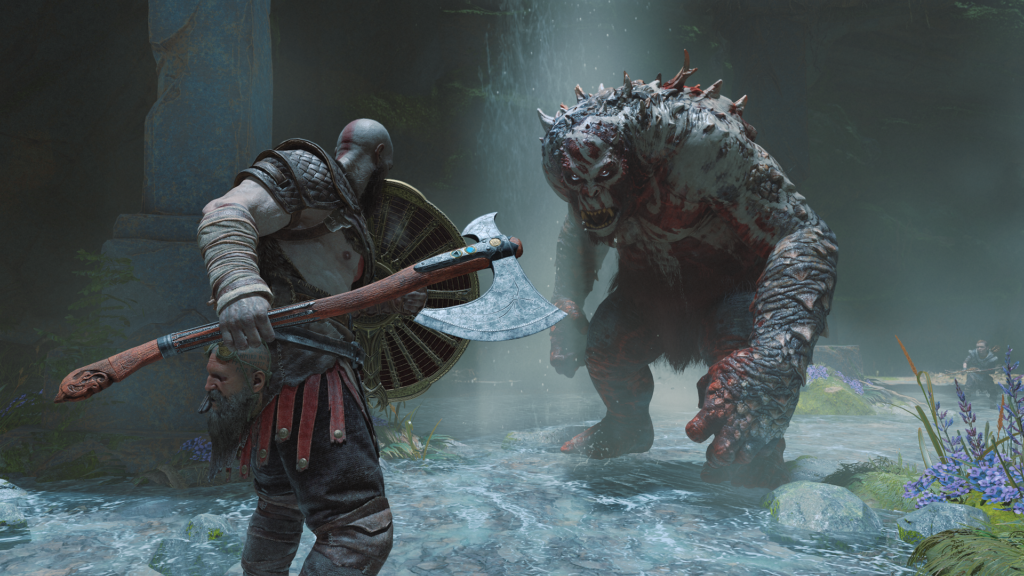 In place of a lot of weapons to choose from, there’s runes, enchantments, and pieces of a weapon to change it. For instance, you’ll get pommels, grips, and blades for the axe to swap out and its properties. You can swap them out that focus on different stats like defense, runic, or strength of attacks. You’ll also obtain blueprints to craft armor pieces, or outright purchase them from vendors. Everything in the game has colored tiers of rarity as well as a level rating that we’re all familiar with, from common to epic. You’ll be able to build your Kratos to a specific playstyle, or mix ‘n’ match for a jack of all trades.

Completing fights and quests will award you with experience points. The XP you collect is like a currency that you get to spend on skills, for both Kratos and Atreus. And skills are broken down into categories like ranged combat, close combat, arrow, rune, and magic. Each with new abilities and an increasing moveset to make you more viable in combat. Found just about everywhere is hacksilver, a coin-based currency which is later becomes a requirement for upgrades to gear. This may also involve having the required materials gathered through exploration, or received as rewards from quests to complete the upgrade. The funny thing is, you’ll be desperate to find the components necessary to upgrade because of how powerful it feels to get it. It’s several hours in before you’re even introduced to the game’s map. While what God of War is doing is not always new, it breaks from the mold of a traditional open-world games. That’s mainly due to the fact that’s not actually an open-world game. Sure, there’s open areas, but they’re confined and carefully constructed places that do not waste your time or energy. There’s puzzles to solve to reach rewards, and sometimes you’ll have to come back at a later time like a Metroidvania because it requires an ability you don’t have yet. The game also eschews the concept of quests, in the traditional sense. There are now goals, and they are tracked by journeys (like a main quest), favors (side quests), as well as treasures and lore (collectibles). This different framing changes the feel of the game, and it never gets bogged down by pointless collecting. In fact, I felt more encouraged to explore as every collectible is worthwhile. The reward is something like extending your life bar, giving you a rare weapon mod, or providing you with background to Norse mythology or Kratos himself.

God of War is full of little touches that demonstrate how much thought and care was put into this. I noticed that Atreus sneezes when Kratos freezes a poison spewing plant, and the area is an icy mist. Or like how Kratos’ impatience for anything off the beaten path makes him grumble. And you can’t ignore his annoyance at talking more than necessary is something that always elicits a smile from me. I was really surprised at how many different locales you visit throughout the game, and how I was completely unspoiled and the things I saw and experienced. This game is an absolute treasure, and it has such painstaking detail in every facet of the game. It stands to reason that a nearly four-year old game has great performance on PC. Without adjusting anything but the resolution, the game runs in 1440p well over 60fps without trying too hard. However, the game ships with NVIDIA DLSS, and now I’m getting anywhere from 100-120fps without it breaking a sweat. Something typically seen in multiplayer games is now making the rounds in singleplayer games, and that’s Reflex. This is the technology that lowers the input lag by utilizing unused GPU cycles in addition to G-SYNC monitor hardware to achieve. Turning this on makes combat more responsive to your inputs, and it’s a tangible feeling you have to play to see. It’s something I’ll enable without hesitating about. I did use a DualSense from my PlayStation 5 to play the game, and it just works – similar to how Days Gone did on PC, making it plug ‘n’ play. It’s easy to say that the PC version has the definitive experience, as it has the lowest lag input (thanks to Reflex) and exceptionally high framerates (thanks to DLSS). One thing’s for certain, the Steam version of the game has an exclusive experience you just can’t get on PlayStation. 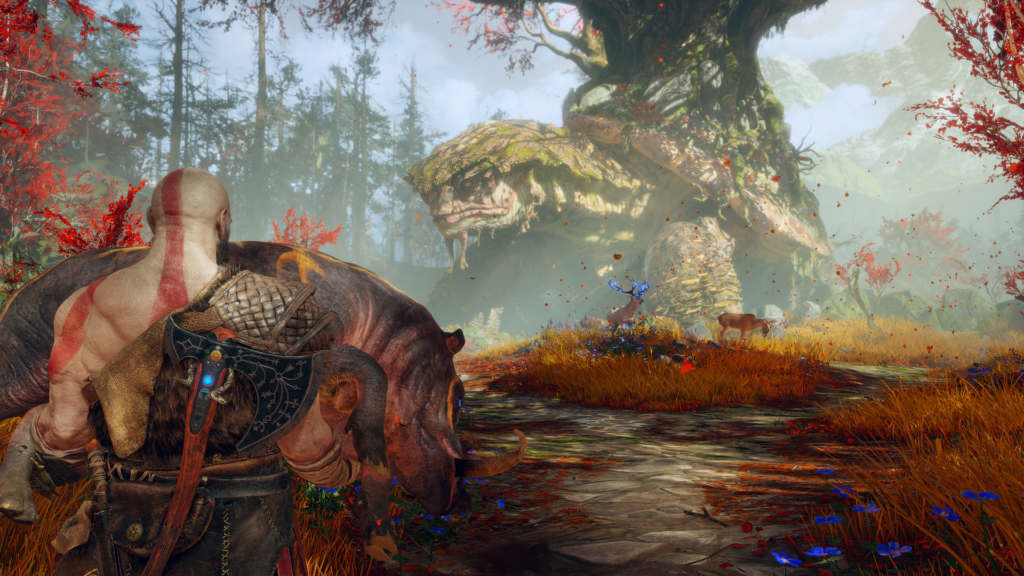 God of War is nothing short of brilliant, beautiful, and brutal. From its incredible story to the combat, this is a one camera masterpiece start-to-finish. While it is priced at $50, is several years old, this is PlayStation 4’s best game now available on a personal computer. Made for players old and new alike, God of War is a fresh start for Kratos and the series, and is totally enthralling. God of War is one of the finest games ever made, and the PC version elevates it to incredible heights.