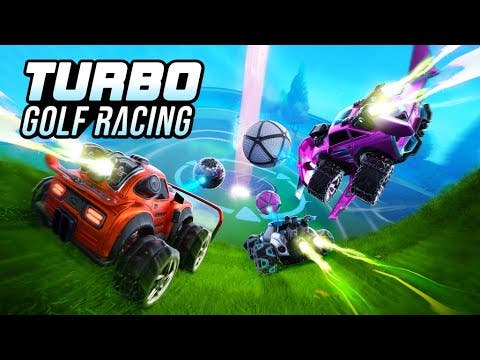 Manchester, UK – 25 March 2022. Hugecalf Studios and publisher Secret Mode are thrilled to announce Turbo Golf Racing, which made its debut at the Future Games Show – Spring Showcase last night. Combining the chaos of multiplayer racing with the skill of golf, Turbo Golf Racing launches into Beta this Spring. Beta registration is now open to members of the public, and players can sign up to participate via the official website, or participate on Xbox platforms via the Xbox Insider Program.

Join the Discord for Beta updates and be the first to get news: https://discord.com/invite/turbogr

Turbo Golf Racing is available to wishlist now on Steam and will launch later this year on PC, Xbox Series X|S, Xbox One and Game Pass.

Turbo Golf Racing is a fast-paced arcade-style sports racing game for up to eight players, all competing to see whose speed-putting skills are up to par. Racers flip, glide, and dash their turbo-charged cars down winding fairways as they strike their oversized golf balls toward the finishing cup.

“From the moment we first laid eyes on Turbo Golf Racing we were hooked by the concept,” says Paige Dolan, Greenlight Manager at Secret Mode. “Hugecalf Studios has crafted a raucous multiplayer experience like no other, and Turbo Golf Racing instantly became a daily staple of our free-time gaming sessions here in The Bunker. We’re counting down the days until the wider world can tee off with great anticipation.”

“Turbo Golf Racing is the game we’ve always dreamed of making,” says Jonny Hughes, Producer at Hugecalf Studios. “We’re incredibly proud of Turbo Golf Racing and our plans for its future, and cannot wait for players to experience it first-hand when the Beta launches this Spring.”