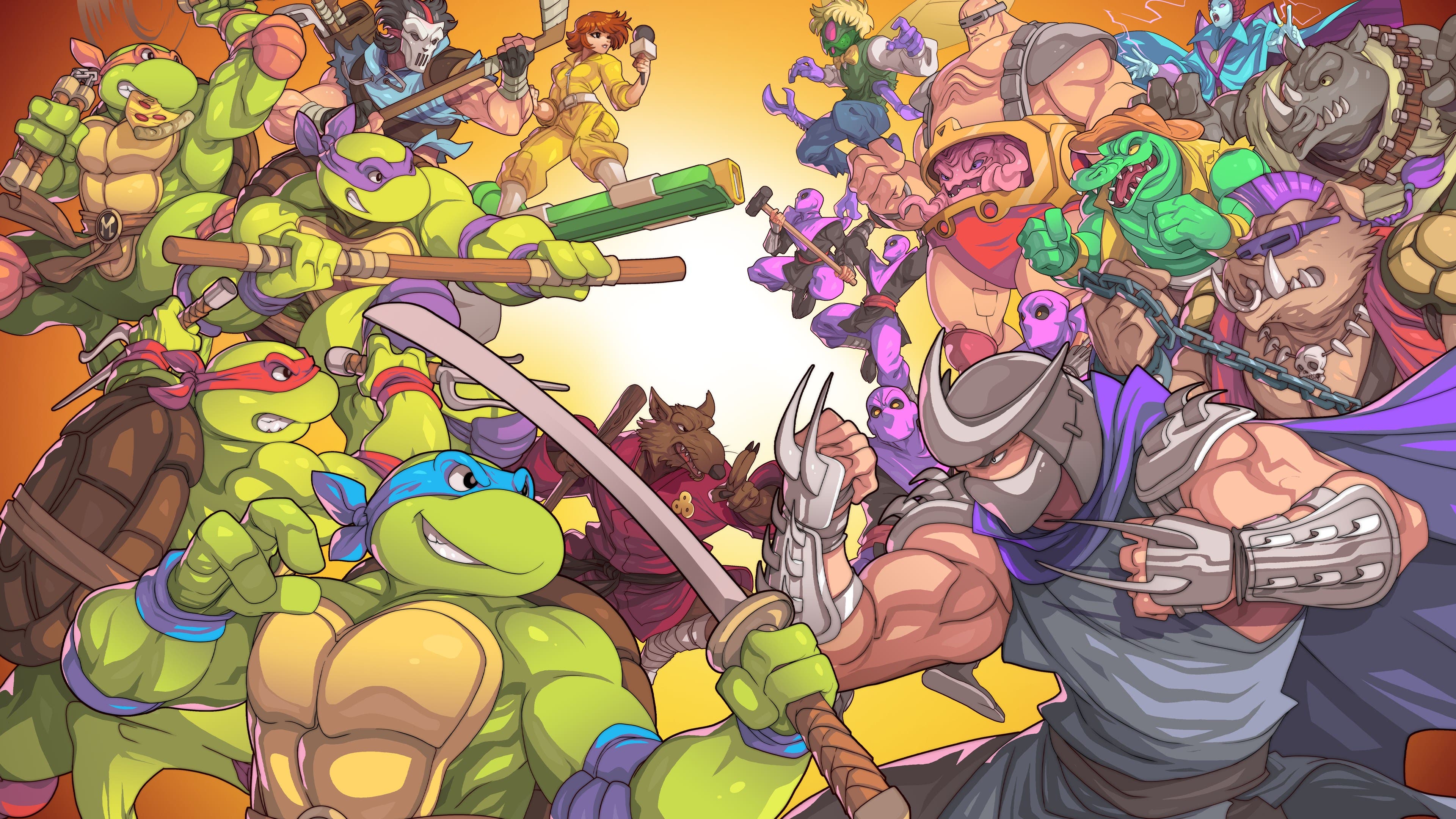 Who wouldn’t want to be a ninja teen, one who leads, one who does machines? Maybe more of a cool but crude or party dude ninja teen? For years the Teenage Mutant Ninja Turtles (TMNT) franchise has been the go-to outlet for your ninja teen fantasies, especially when it comes to video games. Kicking foot soldier butt and taking down the evil Oroku Saki, aka the Shredder, has always been childhood fun for many children and myself over the decades. The TMNT license has had its ups and downs, and in recent years there have been more downs than ups. But can a modernized 2D brawler in the style of the classic TMNT arcade game revitalize these four heroes in green? 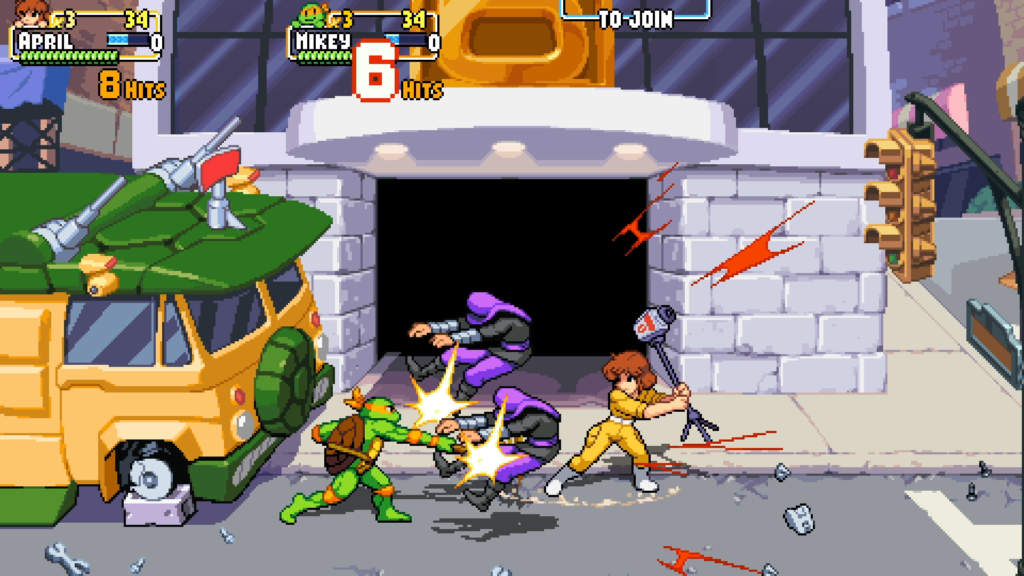 All I can say is, wow, this hit all the right check boxes for me. The game took me the better part of an evening to finish alone, roughly 3-4 hours with breaks, but that whole time I was grinning from ear to ear. From the music to the 80’s cartoon cameos, I was feeling outright radical. The art style hit me first; it’s not a one-to-one match for the ’80s cartoon series, but very close. They are more of a slightly stylized version of the characters. The art seemed vaguely familiar to me, and looking up developer Tribute Games’ previous titles, I saw they worked on Mercenary Kings, a run-and-gun game similar to Contra or Metal Slug. That game featured an art style that I would refer to as hand-drawn 16-bit, and I feel Tribute Games uses a similar style for Shredder’s Revenge.

Combat plays like the previous great TMNT brawlers of yore. But Shredder’s Revenge gives the player more abilities than just jump and attack; you can also dodge. Your character can hop out of the way left or right of an attack and will be invincible until your animation ends. Unfortunately, this also caused me to constantly try to spam the dodge button to avoid attacks, except the moment your animation ends, you are vulnerable again for a split second. So I would avoid one attack, only to flip right into another. It isn’t a complaint, just me being terrible at the game, but I figured you might want to know this as well. Not the “me being terrible” part, but you’re welcome for that. Unfortunately, you can’t seem to dodge in the up or down direction, which would have made some of the boss battles a little easier to navigate. You can also perform rising attacks that launch enemies into the air, giving you ample time to attack without them sneaking in their own. Now, before you begin the Story or Arcade mode, the game gives you a brief tutorial (that you can skip.) I should have watched through it because after I rolled credits, I learned they also included a big swing and charge attack the player can do. I’ll have to save those for playing multiplayer with my family. 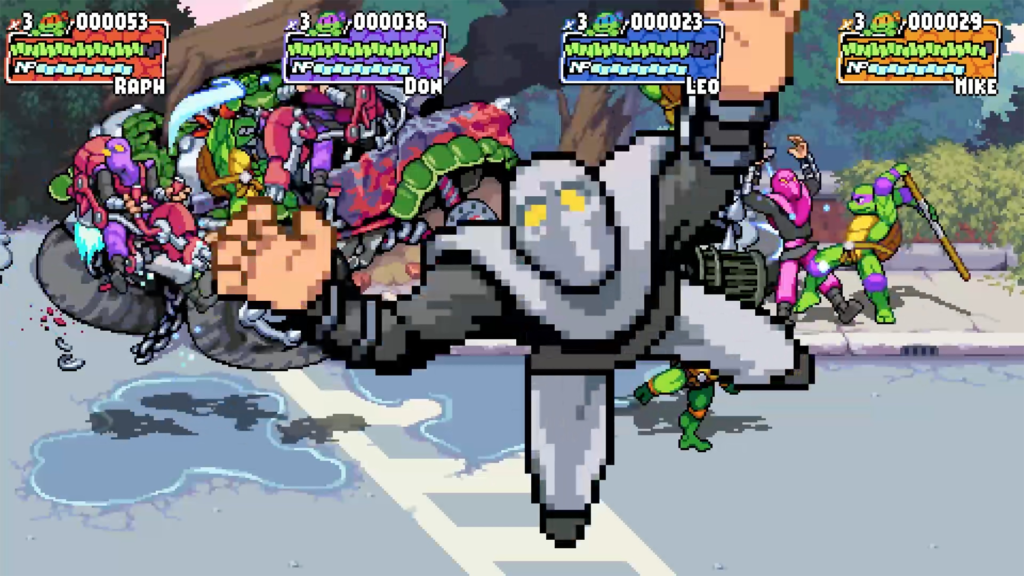 So speaking of multiplayer, I was, unfortunately, unable to experience that feature in this review, but boy, I am looking forward to trying it out. The game comes with the ability to do six-player co-op. Yes, you read that right, six players. The game allows you to do six-player co-op locally, online, OR a mix of both, which is just *chef’s kiss* amazing. Because of having six characters on screen, the field of view has been pulled back over previous games meaning smaller sprites, but I feel this isn’t a significant loss. Back to the multiplayer, though, the only way they could incorporate the feature better would be to cross-play between platforms. During my time in the brief tutorial, I also found out that there are some co-op moves that you’re able to perform. The player can donate ticks of health to another player, you can revive fallen players, and you can perform team attacks; this one, in particular, I’m excited to try. You’re able to play multiplayer in either the Story Mode or in Arcade mode, where it’ll play like the classic coin-op games. You’re given a set number of lives, and your goal is to complete the game.

After all that, I’m sure you’re still in awe of reading the word six; you’re probably thinking, “but Ed, there are only four turtles?” Well, right from the get-go, you also get the choice of Master Splinter and April O’ Neil. I thought that was a cool-dude thing to do Tribute Games. We all know the turtle’s method of attack with their weapons, but how do Master Splinter and April fight? Master Splinter feels more like a tank class of character; he is slower than the rest but very strong; April, on the other hand, is very quick with a lower power rating. Master Splinter uses his walking stick and rat-like moves like scratches and bites, while April gave me a good laugh because she holds her handheld Channel 6 mic the whole time and wails on people. In fact, her super move is to pull out a camera on a pedestal and swing that thing around like a giant hammer. She is quite enjoyable to play as. 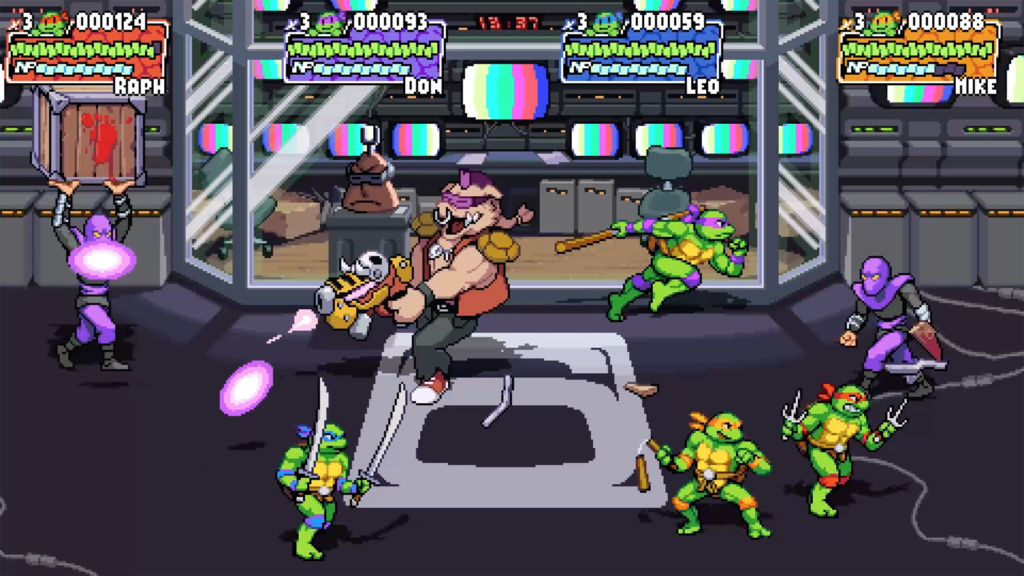 Let’s talk a little more about each character; Shredder’s Revenge gives a star rating for each playable character in three categories, range, speed, and power. Characters with closer range will typically have faster speeds like the previously mentioned April or someone like Michelangelo. Donatello has the longest range but is slow, while Leonardo is your all-around average character. My one odd gripe here is that I think Raphael might be overpowered. Ok, hear me out; the way I played through the story mode was when I lost all my lives, I switched turtles. I would survive a couple of stages before I had to change. When I got to Raph, I cleared most of the rest of the game. See, during story mode gameplay, you earn points, which will level up your turtles. You don’t get to choose abilities like a skill tree; it’s more like a tired unlock system. You’ll get bonuses for health or new attacks; some simple progress unlocks. But where I would finish a turtle at level 3, I first died with Raph once I reached level 7. It’s probably an overcompensation with his weapon choice, the sai, being so short on range, but you may find Raph players out there getting excited with how well they’re doing.

The one last thing I want to touch on is the voice cast. Tribute Games and Dotemu have brought back most of the 80’s cartoon cast to do the voice-over in Shredders Revenge. Prominent voice actors like Cam Clarke and Rob Paulson reprise their roles of Leonardo and Raphael, respectively, while I believe they’ve brought on different actors for Master Splinter and April O’ Neil’s voices. Looking up their IMDB, they have played those characters in other iterations of the turtle’s shows, so there is some history there. Speaking of voices, I love what Tribute Games did regarding the audio. Everything sounds like it’s this crunchy 16-bit arcade throwback. Just listening to the SFX sounds like you’re back in an arcade room listening to a TMNT machine. The only time the sound is clean and crisp is on the musical soundtrack that composer Lee Tropes put together. They even brought in Wu-Tang Clan’s Ghostface Killah and Raekwon to perform a new track titled “We Ain’t Came To Lose.” 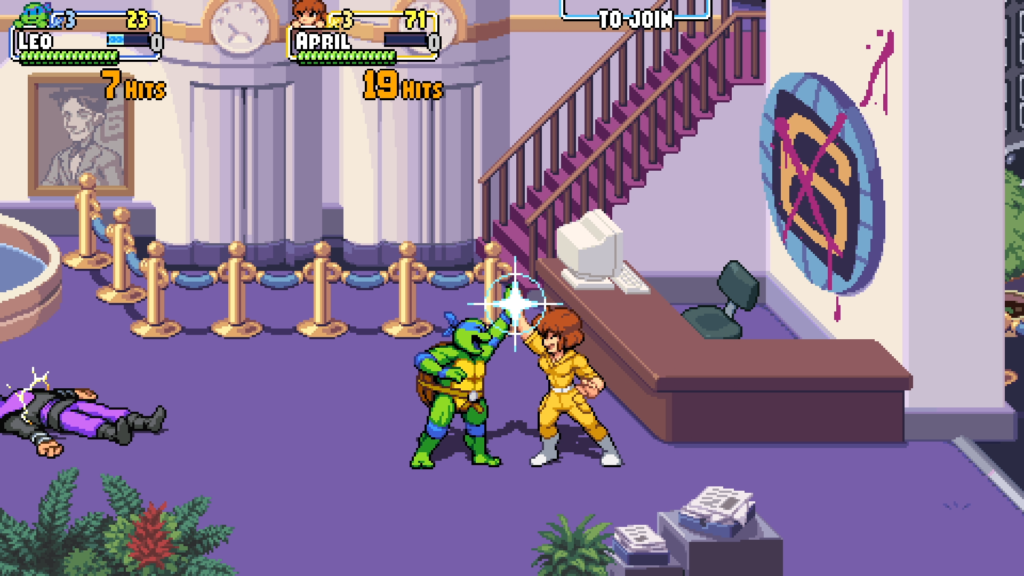 Teenage Mutant Ninja Turtles: Shredder’s Revenge tickled all my nostalgia keys, and it harkened back to the feeling I got when playing with my turtle action figures in my younger days. Days I would hop between battling toys to turning on my NES to play the TMNT Arcade game with my brother. Even with the license’s low points over the years, Shredder’s Revenge feels like a proper revitalization of a series I’ve grown up loving. So to answer my early question, yes, a modernized 2D brawler in the classic TMNT arcade style can revitalize these four heroes; I just love being a turtle!