You are a cat. That’s it, that’s the pitch. You’re a cat who gets to do cat stuff all over the place, in a future-set cybercity inhabited by robots that don’t know or care enough to tell you otherwise. You can jump up onto couches, tables, counters, stacks of books, ledges, air conditioners, precarious beams, rooftops, literally anywhere you can reach. You can knock over bottles and cups and paint cans, push framed pictures off the walls, claw up rugs and sofas. You can meow incessantly. At this very moment, I’m taking a nap on the stomach of a robot wearing a cowboy hat, who is also taking a nap on a leather couch on a dingy neon-soaked street outside of a robot bar. My controller is purring. In Stray, You can do whatever you feel like all of the time like a proper feline, and you’re also the city’s best hope for salvation. 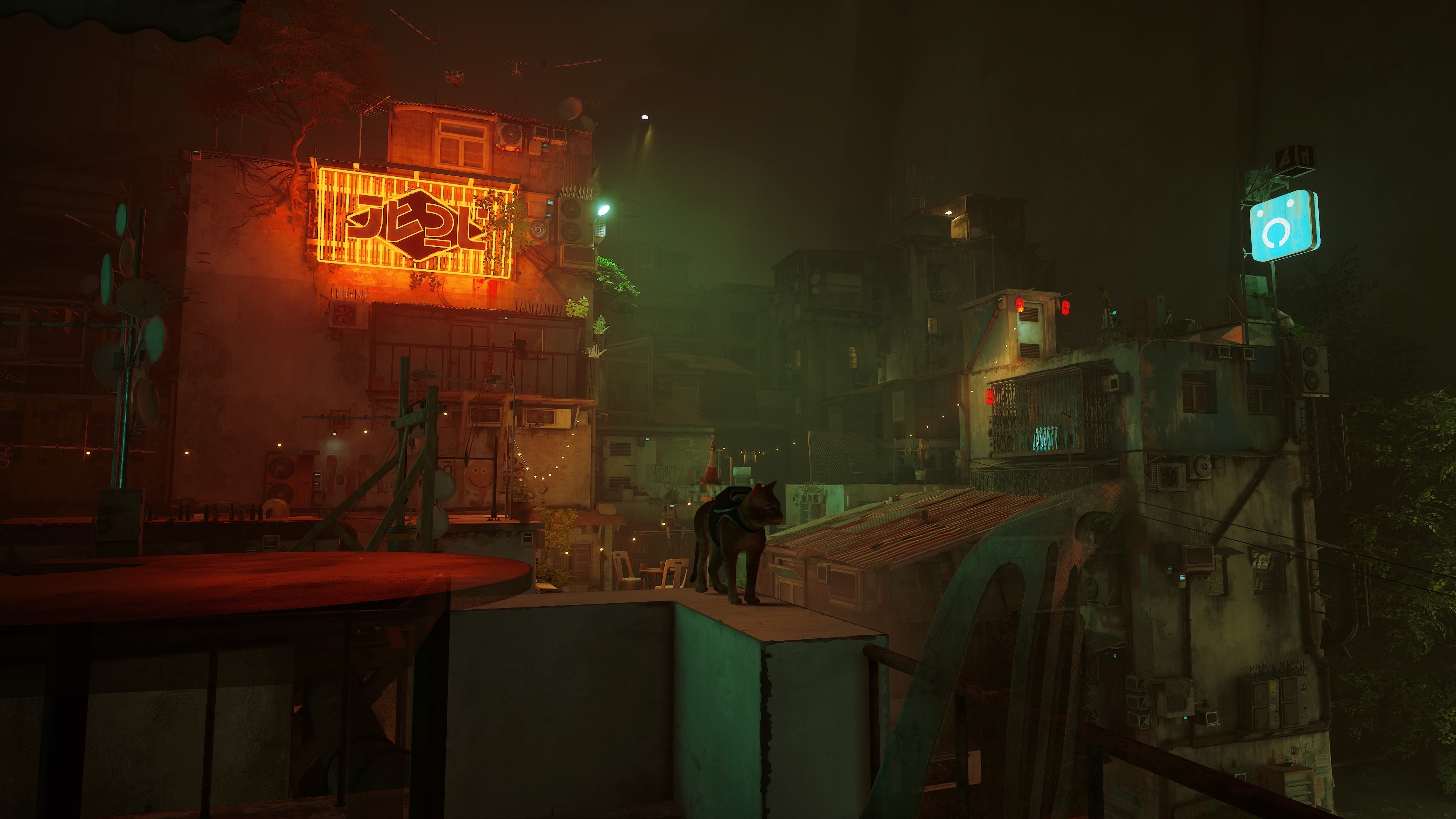 The draws of Stray are obvious from the outset. It’s the game where you play as the titular plucky cat, freely exploring a dystopic cyberpunk city from which humans have long since disappeared, populated instead by Companions, robot assistants who have gained sentience. The allure of ruin beckons at every turn, and the warm glow of the increasingly ubiquitous signs demanding your patronage and attention propel you further. It’s a veritable gumbo of motifs, but together they create a unique flavor that is every bit as satisfying as it looks.

Stray‘s charismatic orange tabby, whom you inhabit throughout your journey, is apparently up for anything and everything, making its way through streets, up to rooftops, and across caverns of buildings via conveniently placed bucket gondolas. Presumably its personal motivation is to reunite with its friends, but who really knows for sure; it’s a cat after all, and it seems just as happy to push forward on its journey and help out the people it meets along the way as it does to do anything else. It also happens to understand spoken English, which certainly helps when it comes to figuring out how best to help (or mildly annoy) the various robots you meet. 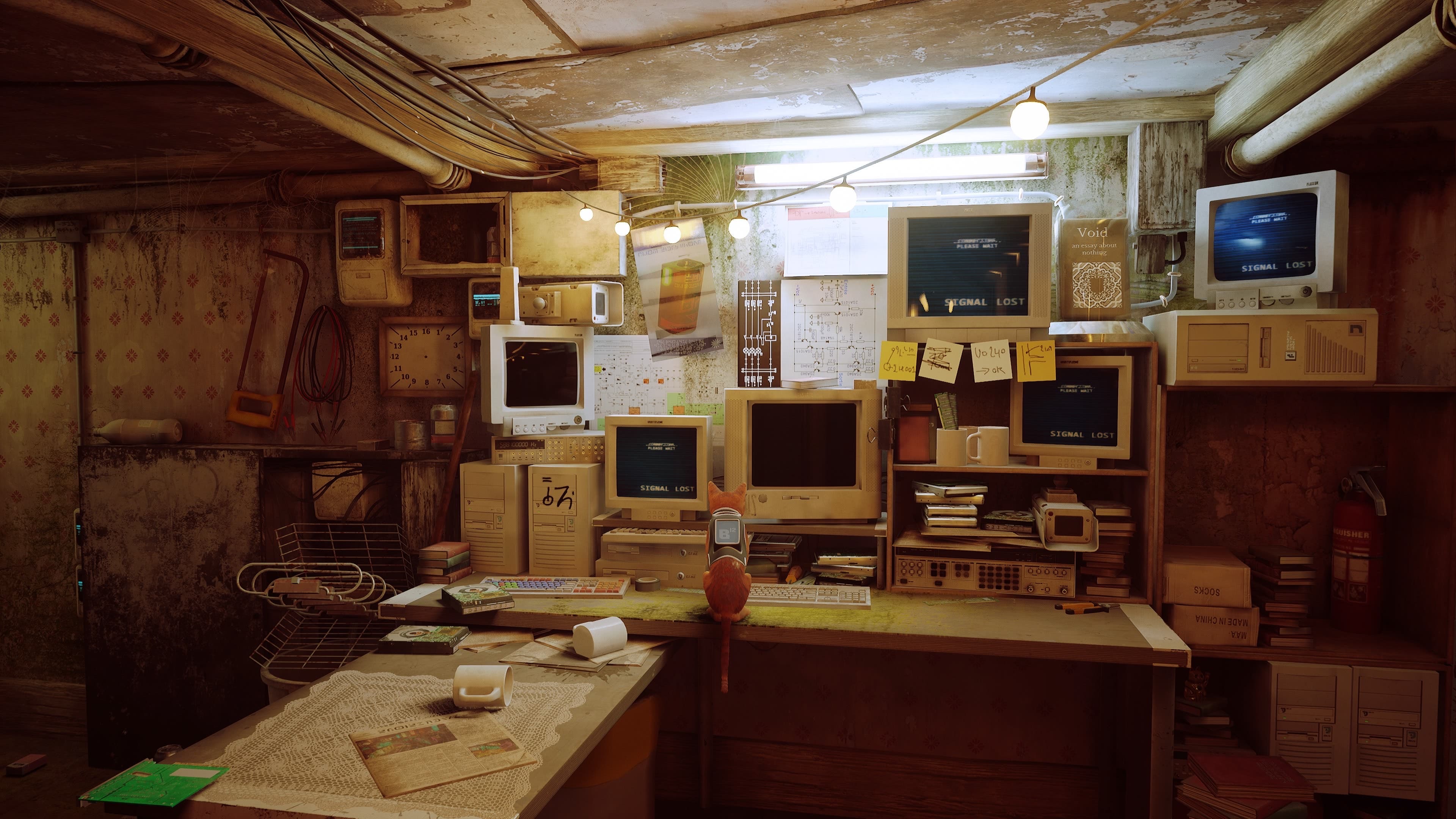 While the main adventure is centered around helping the tabby escape the cybercity, there’s plenty of time for you to explore every last nook and cranny of each area you visit, take in all of the sights, find all of the hidden crevices, and line up the best photo opportunities. It’s a game about the journey, and about experiencing the world that journey occurs within. The lack of pressure that most games apply to the player is a necessary device for encouraging you to see everything there is to see, and feeling comfortable in spending your time doing so. It is full of purpose, but with minimal urgency, which is about as good an embodiment of the cat ethos as you could ask for.

When you’re not helping out the various denizens of the Slums or Midtown, or helping your miniature drone companion B-12 restore its lost memories by scanning specific environmental features, you’re free to just be. It doesn’t roam completely into walking simulator territory, but if you want to take things slow and see every vantage point, or discover every cozy napping spot (of which there are plenty), the city is your playground. 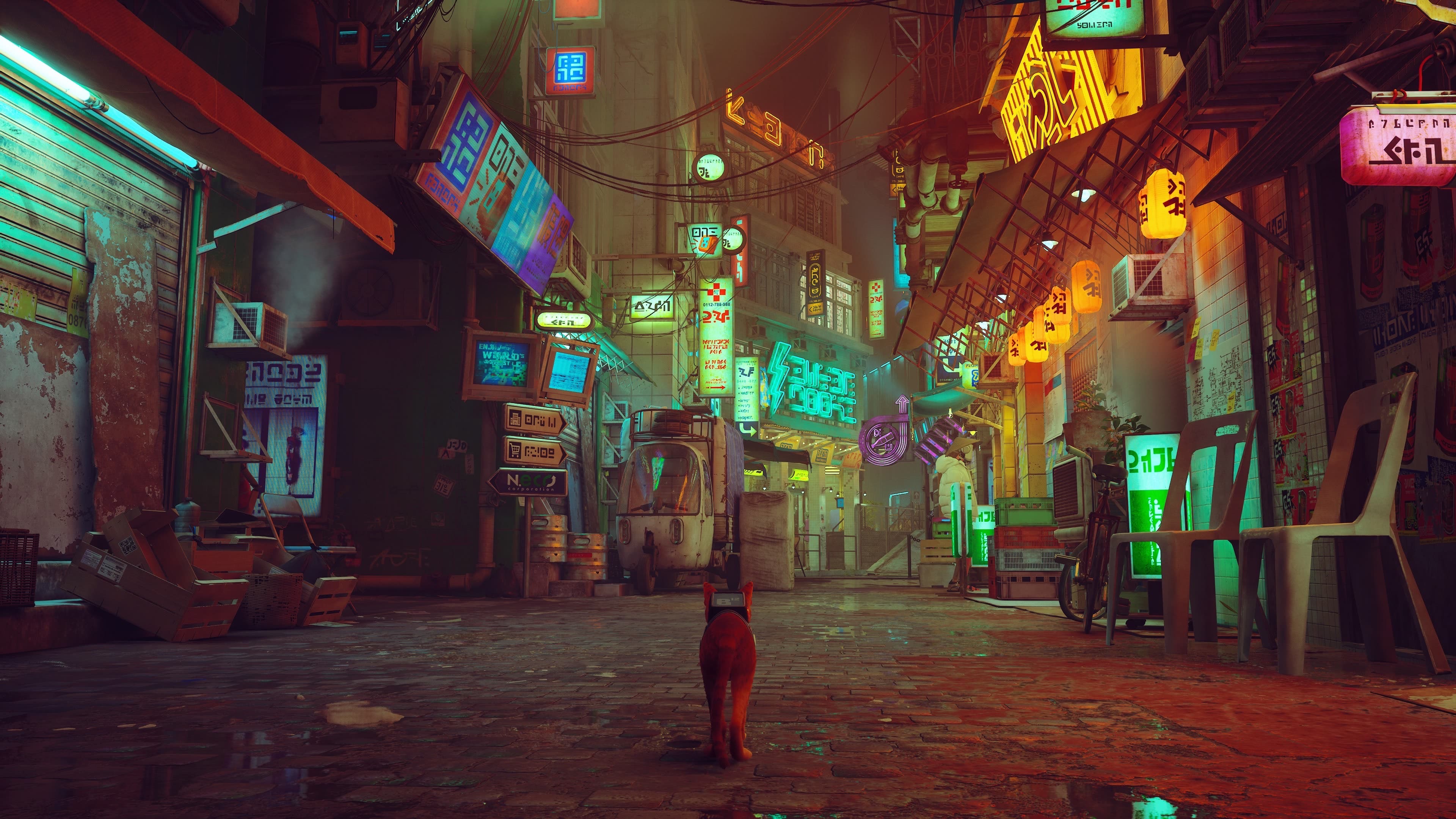 Jumping from ledge to ledge is mostly effortless, as the game eschews full freedom of jumping control in favor of contextual jump actions that place a small button prompt on the nearest jumpable surface that you’re facing. In fact, nearly everything the stray can do to interact with the world utilizes in-world contextual prompts, from scratching on a door to be let in, to rubbing against the legs of a robot affectionately, to pushing over boards to open up a walking path across scaffolds, to jumping in boxes for the fun of it.

There are action sequences and tense moments, too; much of the city is overrun with Zurks, little tardigrade-like balls of destruction that seem cute at a distance but are insatiably ravenous and will devour everything in their path, especially furry quadrapeds that come too close. Several of the game’s action pieces involve you evading and outplatforming groups of Zurks that try desperately to catch you and take you down to the bones, but most of these situations are extremely manageable and the tension is designed to be just enough to make you care but not enough to overly stress you out. Except maybe in the sewers; there’s some scary shit in the sewers but that’s best left to be seen firsthand. There’s also some light stealth in later parts of the game, but the well-designed kind that makes you feel sneaky and quick, just like a cat ought to be. 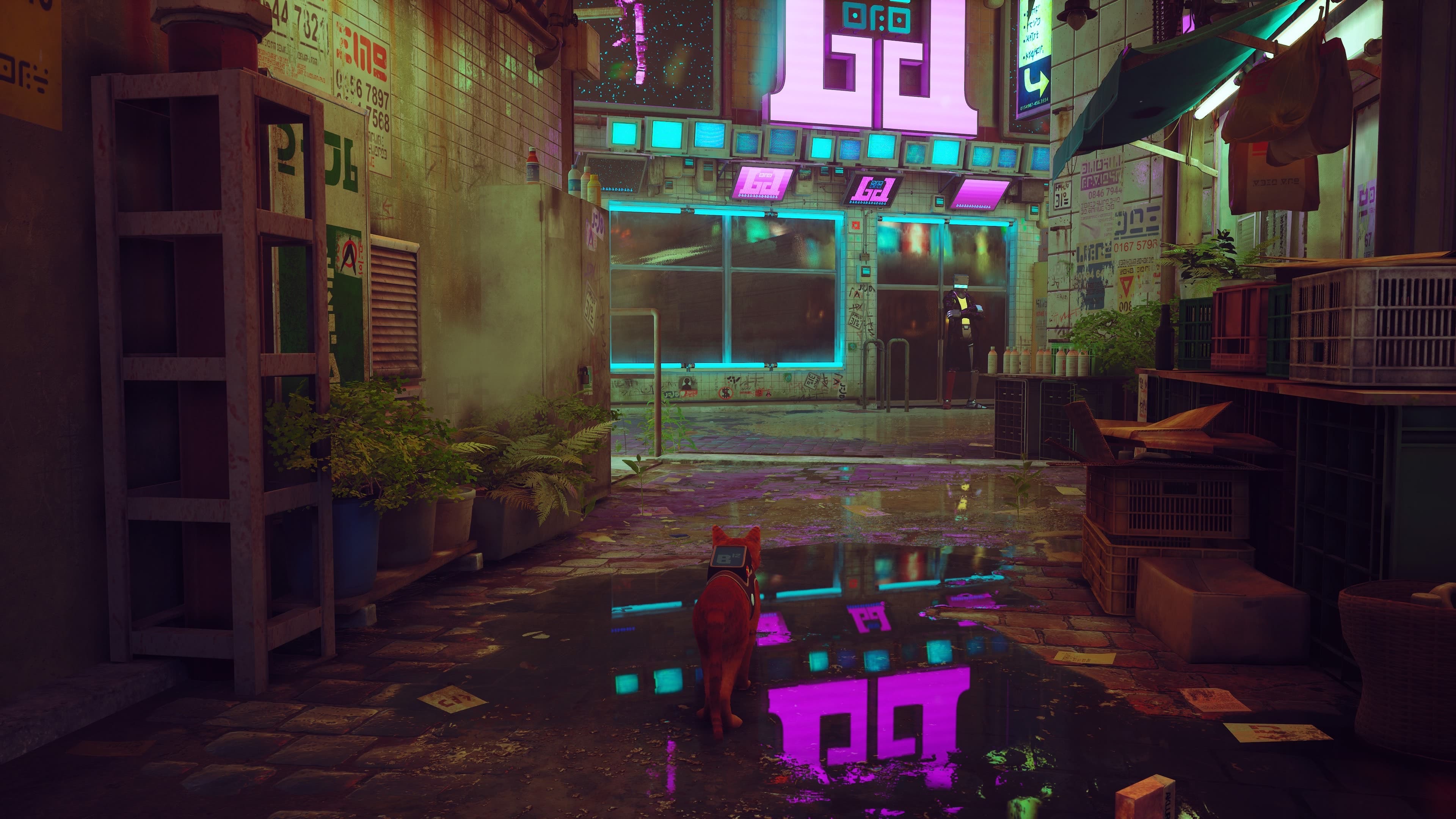 I played Stray on the PlayStation 5, where it looks absolutely stunning in 4K, running at a constant 60 FPS and with HDR enabled. The city, all of its colors, its dark corners, its dirt and trash, and its beauty in decay come to life on the system. It also features some beautifully sharp reflections and realistic-looking lighting effects (which appear to be raytraced but I’ve not confirmed that yet), which all comes together to create a cavalcade of visually arresting scenes. While I am sure that Stray is gorgeous on the PC as well, this is one of those games that really feels at home on a larger screen with a controller in your hand and a living room environment, especially at night.

On PlayStation 5, Stray takes advantage of the DualSense’s speaker and haptic triggers, playing meows and purrs right in your hands, and providing resistance whenever you’re digging your claws into something extra scratchy or making biscuits on something soft. It’s nothing revolutionary in terms of how the controller is being used, but it adds to the overall sense of immersion in subtle ways. 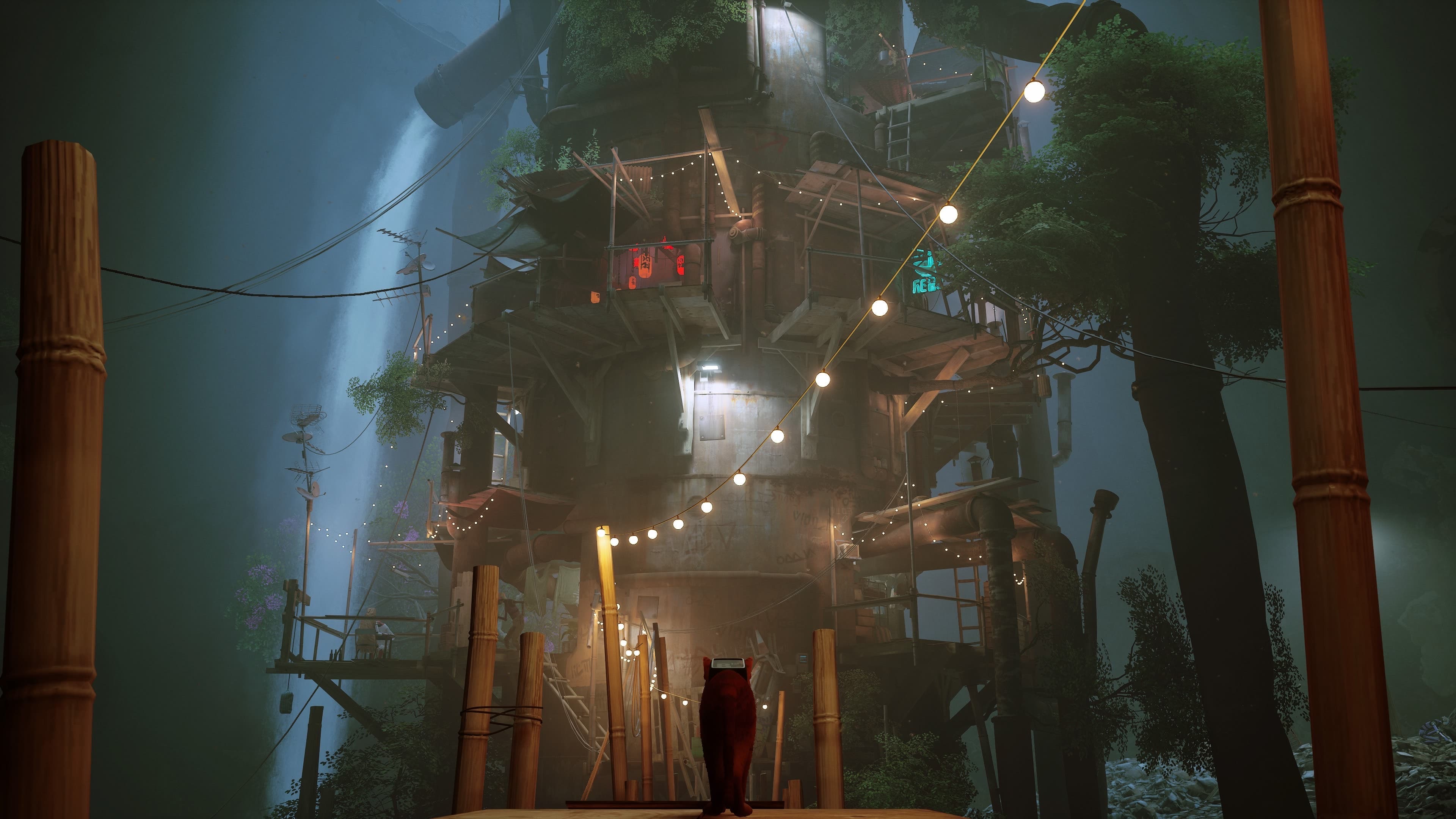 Stray is full of heart, sprinkled with plenty of cute moments between the cat and the bots it meets, and innocent but entertaining cat antics like getting your head stuck in a paper bag or being startled backward because something you knocked over fell too close. In many cases it’s not even specific scripted moments where the personality shines through, but it’s that the entire city is created in a way so that opportunities for warmth and joy exist nearly everywhere, especially when paired with the mechanics of simply being a cat and being able to do cat things all the time.

The only thing I find myself wanting for in Stray is just… more. It’s such a deliberately composed thing, precise in its design and scope, packing loads of detail into its spaces and giving you just enough to see and do without becoming rote. The main inhabited areas where much of the game takes place are so fun to explore, I often wished there was even more to see and do in each of them, like each area was over and done with too soon even after I’d finished everything there was. I think it’s the usual problem of balancing there being enough to see without it becoming overwhelming or clouding the player’s focus, but I do wish there were just a few more apartments and shops to dip into here and there. 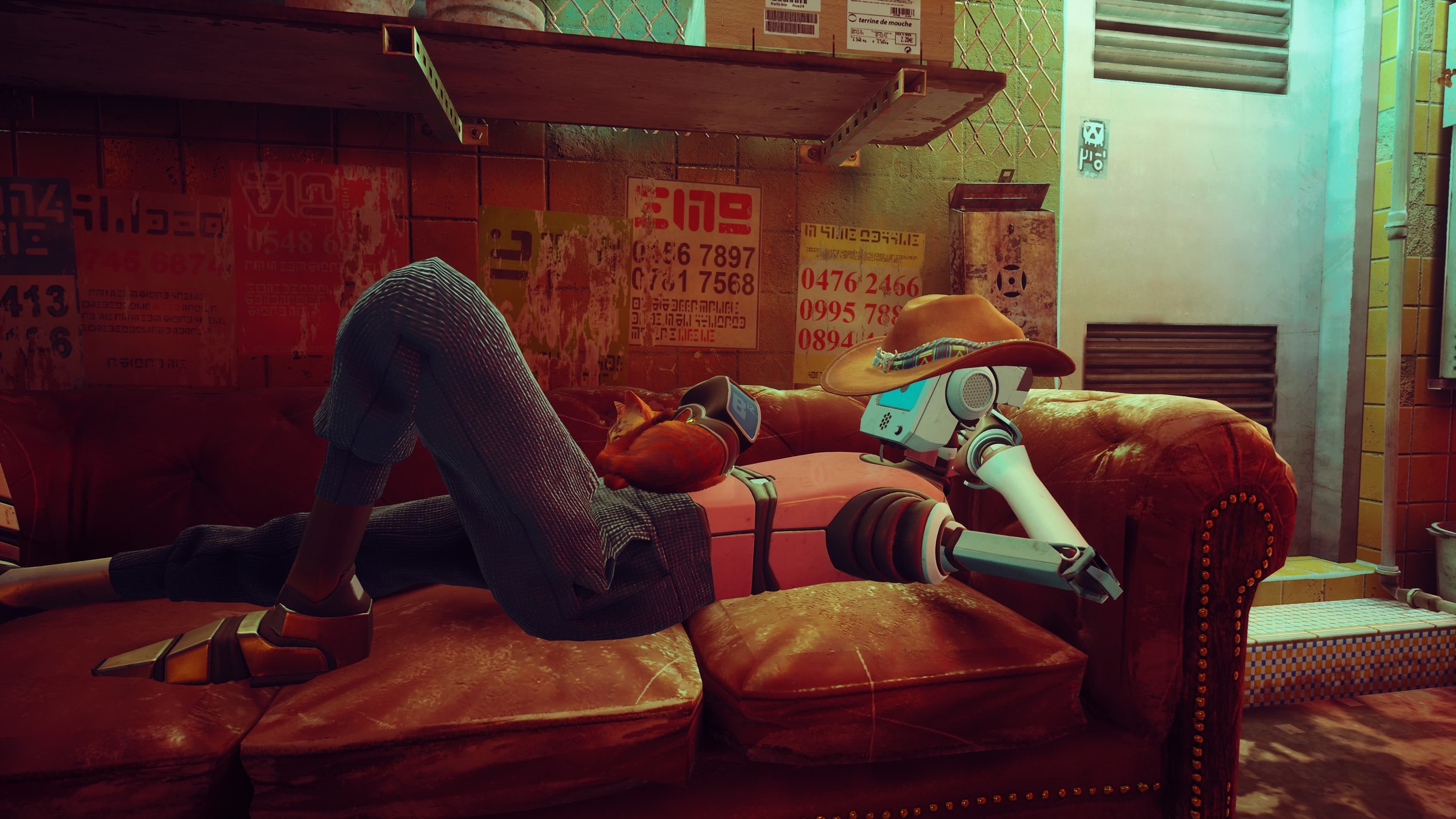 Stray is a serious vibe from start to finish, and it’s not interested in being a loud, in your face blockbuster type of game. It is paced exactly as you want it to be; it’s often quiet, sometimes contemplative, occasionally meandering (as in carefree, not distracted), but never dull. It’s an adventure, and there is purpose to it, but more than anything Stray wants you to just be there and experience what it has to offer. Frankly, this might be too laid back for some; there certainly isn’t high drama to be found, or even massive stakes to compel you forward, and while you can blitz through it quickly, in doing so you’d miss a lot. Stray offers something for curious at heart, an exploratory adventure with lots of joy to be had, and to get the most out of it you’ve really got to take it at a cat’s pace.