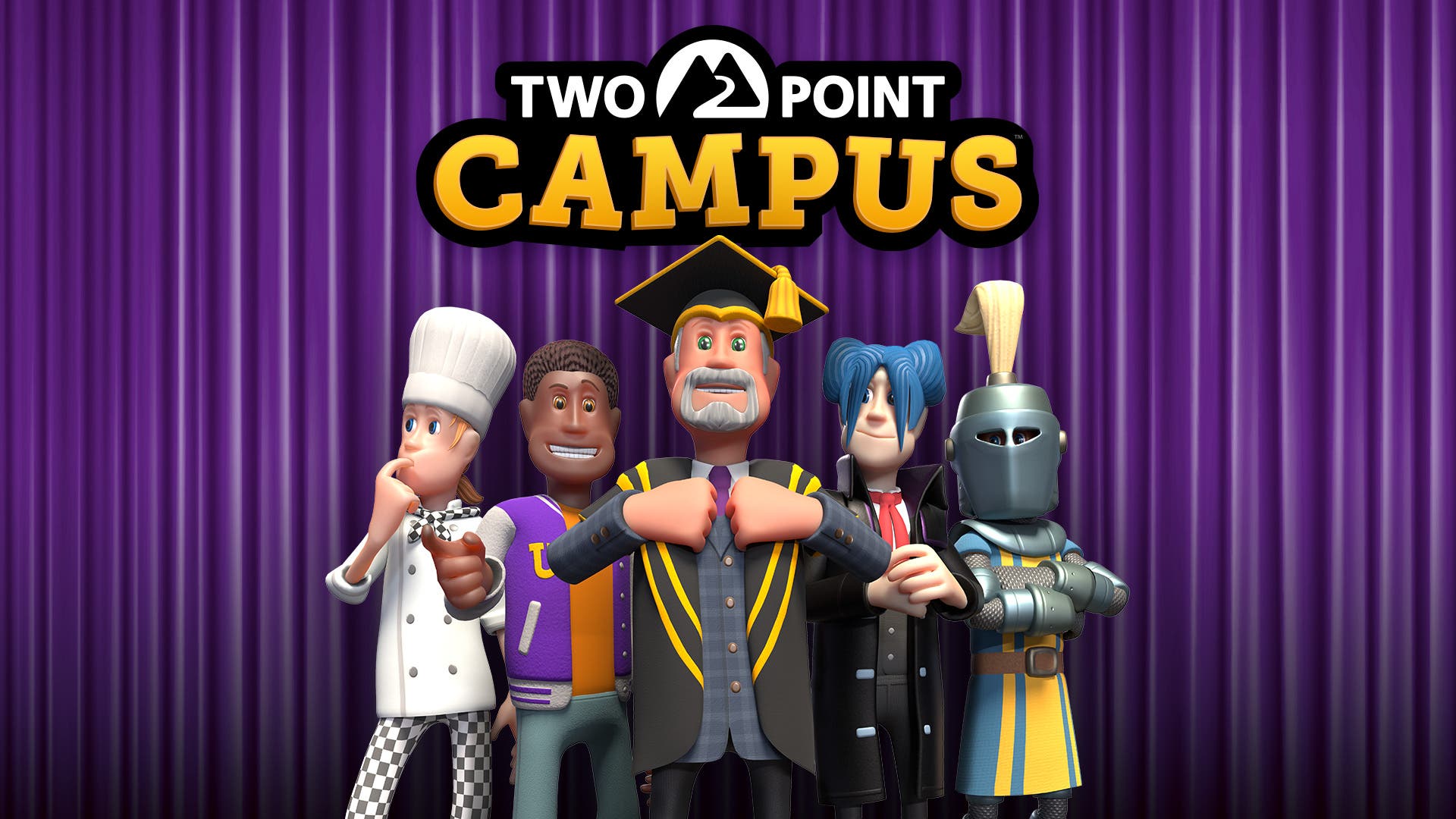 I never went to college, but if I had, I wish it would’ve been to any of the universities I made in my time playing Two Point Campus, the sophomore entry from Two Point Studios. This is a much-improved and slightly easier entry, showing lessons learned from 2018’s fantastic Two Point Hospital, as it makes academia fun and humorous in ways you’d least expect. There haven’t been many school-focused tycoon-type games, and for that Two Point Studios excels in doing something new and different. Each level chucks expectations out the window like it was the last day of school. Two Point Studio’s brand of humor is extremely British, but even Lori Loughlin couldn’t buy the smile I had on the whole time. Two Point Campus is a treasure of a management sim you can’t stop playing, easily making it a must-play.

Two Point Campus has twelve levels. Each with a different theme spanning various schools like culinary, knight, wizard, party, and spy that never ceases to surprise or please at being so zany in its approach. The first two levels you play are the tutorial, introducing you to the mechanics and how everything works with a pretty good safety net. The third level however, is where the game throws you in the deep end with stringent requirements for even the simplest things. It becomes more and more demanding to even achieve a one-star rating school, but I would never classify the game as “hard”. It’s all manageable and quick to restart in order prevent the same mistakes. The gameplay loop is rather straightforward: starting a campus with nothing, rated at zero stars, and then making something of it. You’ll build all necessary rooms, place décor, hire staff, and then kick-off the school year. The main goal is to achieve a one-star rating, which, upon completion unlocks the next level. Alternatively you can keep going until you achieve three-star rating or whatever arbitrary goals you set for yourself beyond that.

It’s clear Two Point Studios has been paying a lot of attention to the feedback given to them over the years, as there’s many differences from Two Point Hospital. Picking up and moving whole rooms works just like before, but it feels less janky this time around. It does feel like the stream of income comes in faster and easier, as tuition is at a higher rate than patients paying hospital bills. While this isn’t a game changer, being able to put more than one door on any given room is a major quality of life improvement that I really appreciate. Perhaps the most standout element of Two Point Campus is the shift towards putting focus on the students and ensuring their success. The previous game focused more on the staff and their well-being, where here it doesn’t matter as much, but making them more effective is another benefit to the students. Longevity is also an element, it’s best to keep the students happy enough so that they stay to graduate. This reversal is the heart of the game. 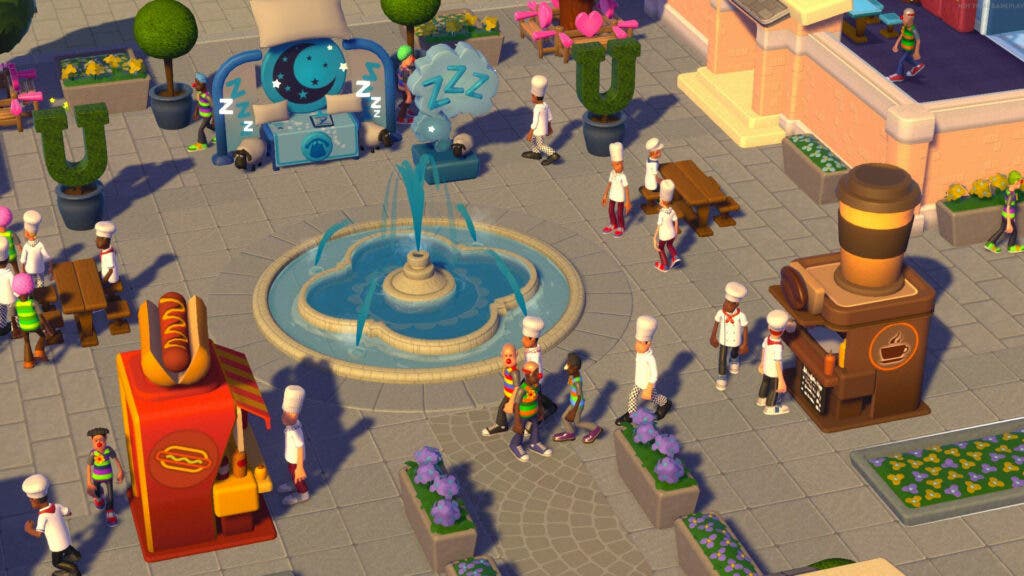 Returning are the two forms of currency in the game: cash and kudosh. Cash is what you’d expect, it lets you purchase classrooms, recreational items, and decorative items that improves the schools appearance and retention. Kudosh is a spendable currency based on mini-achievements earned throughout the course of playing the game, used to unlock more items to spend your cash on. At the core, the cash you have on-hand is based on the tuition fees you incur for the students attending your school. However, to keep the money rolling in you’ll have to keep students coming back year over year, entice new students to enroll, and make sure the school performs well. There will be financial opportunities that if you subject yourself to an inspection of your operation, or participate in a contest, that you’ll receive some extra spending cash to bolster that bank account.

Another noticeable difference with Two Point Campus the ability to do some external construction. With this larger focus on external buildings, you have more creative freedom. Such as building medieval battlegrounds or outdoor soccer pitches. You can also spruce up the attractiveness of your exteriors with custom buildings, paths, and other décor as you see fit. Over the course of a school year there will be natural disasters like raining frogs, or events where invaders from rival schools come in and try to trash the place. All the same, you’ll need janitors, specialized in landscaping and security to help take care of them. I do appreciate that janitors are multi-faceted, and can be trained as such. Should the school grow too large year over year, there’s what seems like double the plots of land to expand your campus to be a top-tier offering.

Everything earns experience and gains levels, from students to rooms to the campus itself. Many of the game’s requirements will hinge on any one of these being a certain level, and it won’t be long before you’re acquainted with how to make that happen. Campus levels are the most beneficial, as it provides points to invest in upgrading courses or adding new ones to the curriculum over summer break. The setup here makes being a school administrator an intuitive experience.

At the end of the school year, there’s an award show just like Two Point Hospital, that would show you all the stats and awards you accumulated. It’s just a great time to celebrate your achievements from the year, and possibly glean any insight on what you could do different. You can make changes at any time, but it’s better to do it without disruption, and that’s where summer break allows for you to plan for next year, and make changes to your campus. If you do expand to new plots of land, you can pay less and build it yourself, or pay a little more to have it built-in right away. It’s worth noting that if you grow tired of building the same rooms over and over again, you can save pre-sets for types of rooms so that you can just drop them in without having to do it over and over again, which also saves considerable time when building out new schools in new levels.

Throughout the year, you’ll receive messages from students directly, and they’ll have requests that you can either satisfy or deny. If accepted, these become your personal goals. There’s no real benefit to you by completing them, but students will be happier if you hung up that family tree poster or installed an arcade in the student union, and there’s likely some kudosh in it for you, too. Students tend to be happier when their getting good grades, so making the library have all the available tools necessary boosts that. However it’s not all work, as most of the kids want to play and relax in their off time, and scheduling events (at a cost) is a great way to do that. You can setup a watch party in the student lounge, or bigger events with a DJ at the student union is a great way to improve entertainment and increase happiness. It’s also important to ensure that the school’s attractiveness is high, so that it makes prospect students want to apply. Students being such a big focus of the game is what makes it all work so well, and it helps you care that little bit more.

Unlike Two Point Hospital, I experienced far less bugs this time around, both in-game and game-related. I actually only ran into a handful of minor ones: I sometimes had error boxes for items that simply didn’t exist, and would eventually clear. Then I had a student stuck in the air, couldn’t be repositioned, who was getting more and more upset as time wore on. Expelling him was an option, but that would be a negative stat come the end of the year at the awards. Here in Two Point Campus, all you can do is quick save, there’s no way to roll back to an earlier save either before a bug existed, or before you made that gigantic mistake. It’s not a huge deal, but it’s something I’d still like to see happen in an update down the road someday. This was a far smoother gameplay experience than its predecessor.

It was hard imagining how running a campus could achieve the wackiness of Two Point Hospital, but Two Point Campus proves that college-level humor will go a long way. It’s a familiar yet wildly different game that carves its own path, a sequel that delivers in every aspect. I laughed out loud at the goings on at these themed universities, I applauded the bespoke animations each prop has, and I love how clever this game is. This management sim cannot be overlooked, Two Point Campus is a ridiculously charming and endlessly playable.