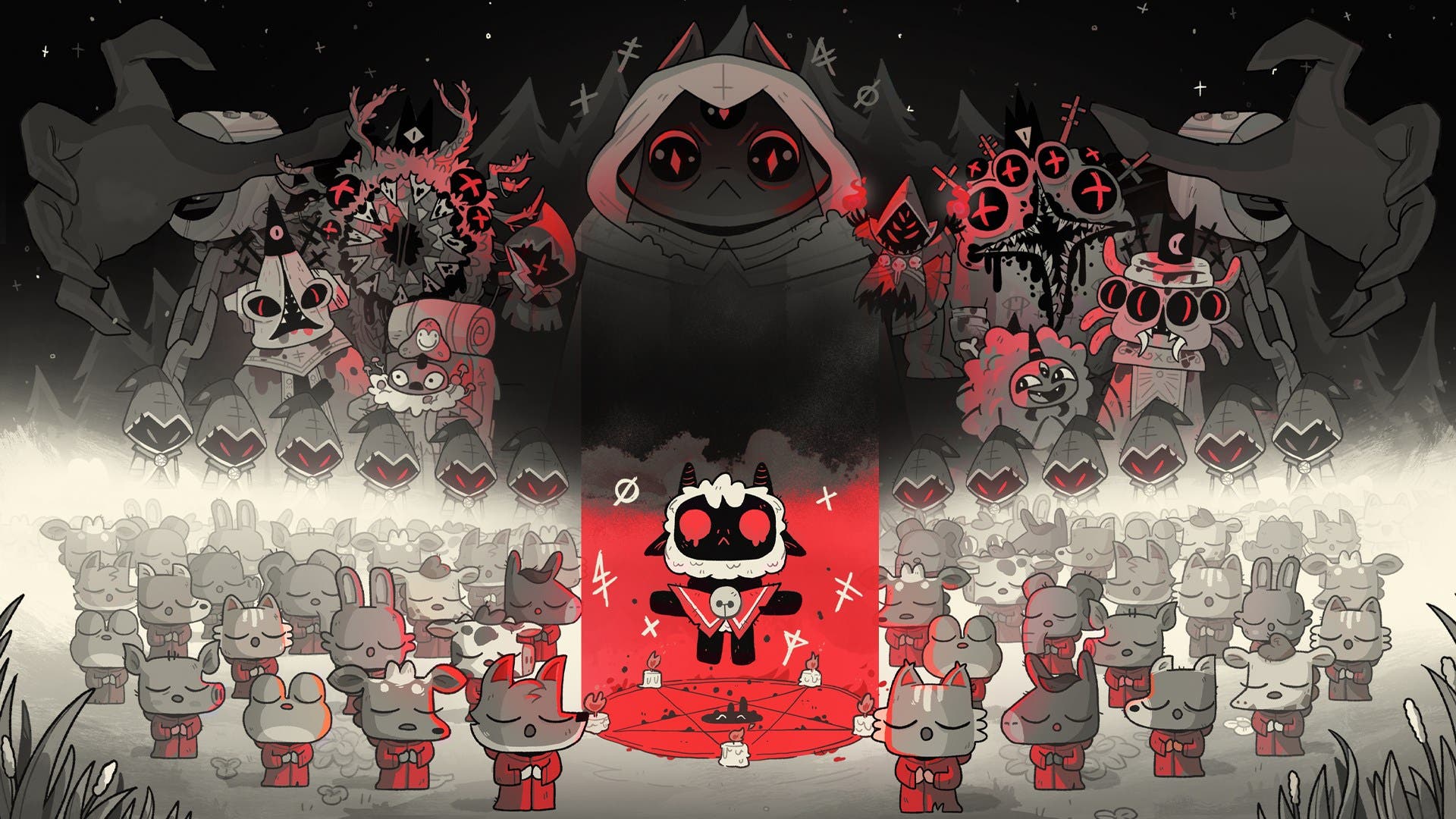 Charles Manson is famous for saying “Death is the greatest form of love.” Losing a follower is a big hit, but knowing that they allowed me to get an additional skill or unlock is all love. As someone who’s ran a cult for 50-something in-game days, I can attest to this – I never thought I’d agree with a cult leader, but here we are. Cult of the Lamb is both a game of cuteness with darkness overload, full of ambition without any of the shortcomings. The game is both a roguelike and a colony management sim, which is hell to keep things running, but it’s heaven when you’ve got it all figured out and automated most of it. Massive Monster blends two genres seamlessly and Cult of the Lamb comes together to be a cohesive whole that will have many flocking to play it.

You are a lamb that’s part of an existing cult who’s then sent to be a literal lamb to the slaughter. The One Who Waits, an omnipotent being contacts you, promising to provide salvation, and asks that you create a cult in his name to then to defeat the “Bishops of the Old Faith”. Your options are to either agree or strongly agree to the proposition, you’re then off to start the cult of your dreams, or nightmares in order to overthrow the four bishops. Cult of the Lamb is a roguelike akin to Hades meets management sim where you have meet the needs of your colony. The game runs at an even split of duties, with the first half being a roguelike where you fight baddies and take down bosses. The other half exploring various points on a map, talking to NPCs, completing quests, and competing in mini-games, all while running your cult. There are four difficulties to play the game: easy, medium (developer recommended), hard, extra hard – this makes the game very accessible for all types of players.

The opening of the game slowly introduces elements one-by-one, as there’s a lot of them. You’re free to name your cult whatever you want, which can be humorous as each time you fast travel to it, it gets displayed. You’re called to action in the first world that opens up, and I’m convinced that the first world and boss is meant to be easy to defeat. After that, things severely ramp up in challenge. Across your adventure in the first world, you’ll rescue or save potential followers to indoctrinate into your cult. Once you get them, you’re able to name them, customize their appearance, and review their traits before accepting them. Disappointingly followers can die, so all the effort to customize them becomes all for naught, and a useless endeavor. One reason you might deny them is because of some potential followers may have a certain negative trait might be a dealbreaker for how you’re running your cult. Once you’ve accepted them, you then assign them a role based on what you have going on at your compound.

The roguelike loop is ridiculously fun, it never disappoints. Since this is a religion, each new run is called a crusade, and at the start of a crusade, you’ll pick-up a melee weapon and a ranged weapon. Once you unlock vampiric starter melee weapons, it tends to make your crusaders rather overpowered, but it feels great. Then you’ll progress in a grid assortment similar to The Binding of Isaac or any roguelike with multiple paths. As you enter new rooms, sometimes they’ll be a reader, and you’ll be given a choice of tarot cards that will add buffs like adding an additional heart of health or increasing damage. Every other room is usually a combat arena to fight waves of enemies before clearing. It’s worth noting that there’s grass and stone that can be gathered for resources before moving on to the next room, and these resources come back to your compound. After defeating a boss, you go back to the cult to manage anything that needs tending to, then when you’re ready you can jump back into the next crusade.

The day-to-day cult stuff is pretty easy to pick-up and then commit to memory. Each day you get a refresh to conduct sermons, which increase faith and could resolve issues or prevent dissent. You can decide perform rituals like a feast to keep bellies full or sacrifice a follower for other bonuses. You can decide on doctrines that decide on either celebrating or hurting followers in a ritual. Once those tasks are done, tending to your crops are a necessity, as is picking up poop and vomit. You can also collect devotion from prayers, once maxed out it turns into divine inspiration which can be spent on an upgrade for the compound. It’s never a dull moment, and thankfully some of the more mundane tasks can be automated once you make more . 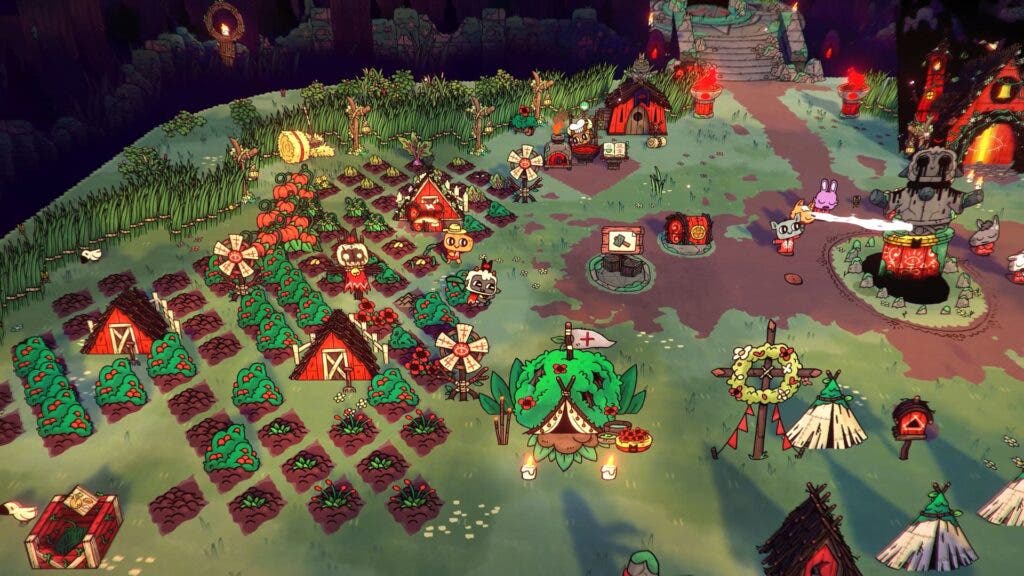 Cult of the Lamb has skill trees of various kinds, from cult skill trees to personal skill tress, there’s so many ways to improve things not only for yourself, but the cult, too. Investing in the cult helps ensure they stick around and don’t get too upset. As you upgrade into weapons, you can introduce vampiric and poison weapons, making them incredibly powerful and essential for each of your crusades. It’ll take players anywhere from twelve to twenty-four hours to finish the game, but it’s a blast the whole way through.

While it may not seem obvious, you have to feed your followers, provide shelter, and give them tasks to keep them busy: cut wood, mine stone, or pray. Once you build a cooking station, you can make meals from items you grow, or things you collect. One time a follower pulled me aside, and asked me make a bowl of poop at their behest, so I did and he got sick, but it satisfied their interest. Your followers can be weird, and it’s hard because when you receive requests from your followers, denying them will reduce faith.

Accessing each world that one of the four bishops inhabit require a certain number of followers to unlock access. Once the locations are unlocked, they increase in difficulty, so you can’t do it too early. If you’ve defeated a boss in a particular world, returning to that world will see tougher enemies in them. This makes for a really fun challenge to unlock new items for placing in your compound that can only be gathered in specific worlds.

Death is not the end, and this being a roguelike, will happen a lot during the course of playing the game. Followers will lose some faith in you, but that’s easy to restore through a sermon or other means like giving gifts or a daily blessings. You can even chat with them, and since followers can take the form of an animal, if they happen to be a dog, then you can pet them. You will lose followers either through death or by their own loss of faith in the cult, there’s no way to truly lose the game. What is lost can be found again. 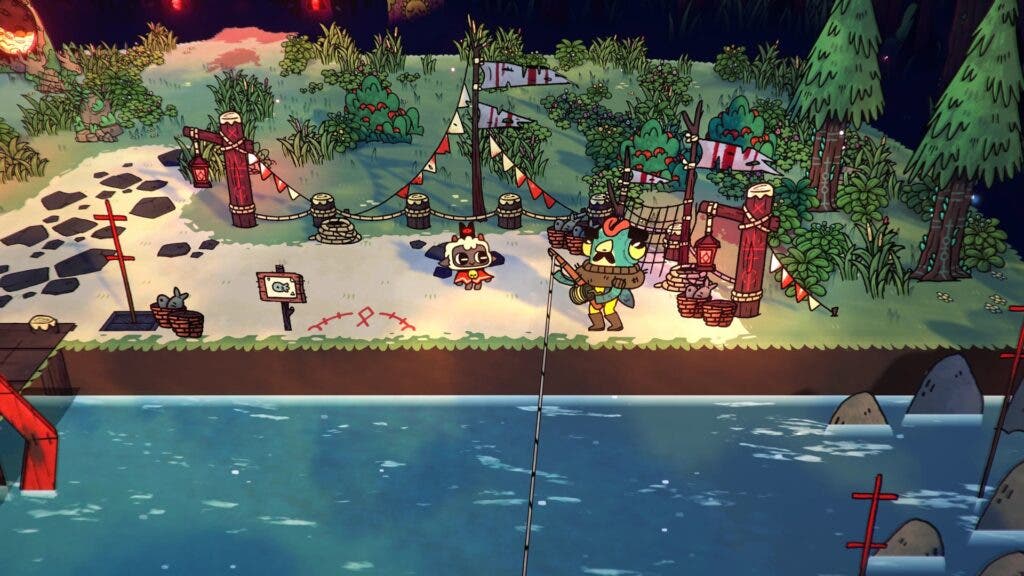 While it takes a specific resources to unlock, there different capes or fleeces you can equip. These offer differing effects. For example, the golden fleece stacks damage on successive kills, so long as you don’t get hit, which then deals damage. I had moments where I was dealing 310% damage but as soon as I got hit, that reset back to 0% and had to be built up again. There’s also different crowns you can don for differing effects as well. There’s big trade-offs by switching away from the defaults. This lets you customize to fit your playstyle and essentially enter into crusades with different loadouts.

Cult of the Lamb is not without some surprises, there’s mini-games to play as well. The first one you come across is Knucklebones, a game where up to nine die can be placed, using their numerical values for a sum in each lane to defeat your opponent. It wouldn’t be a game in 2022 if it didn’t have a fishing mini-game, so this has a good one to sink some time into. It’s rather simplistic, but it’s really satisfying to sit at the docks and fish for food or completing a quest. It’s very easy for you to spend far too much time on things that don’t really matter that aren’t the two core pillars of the game. 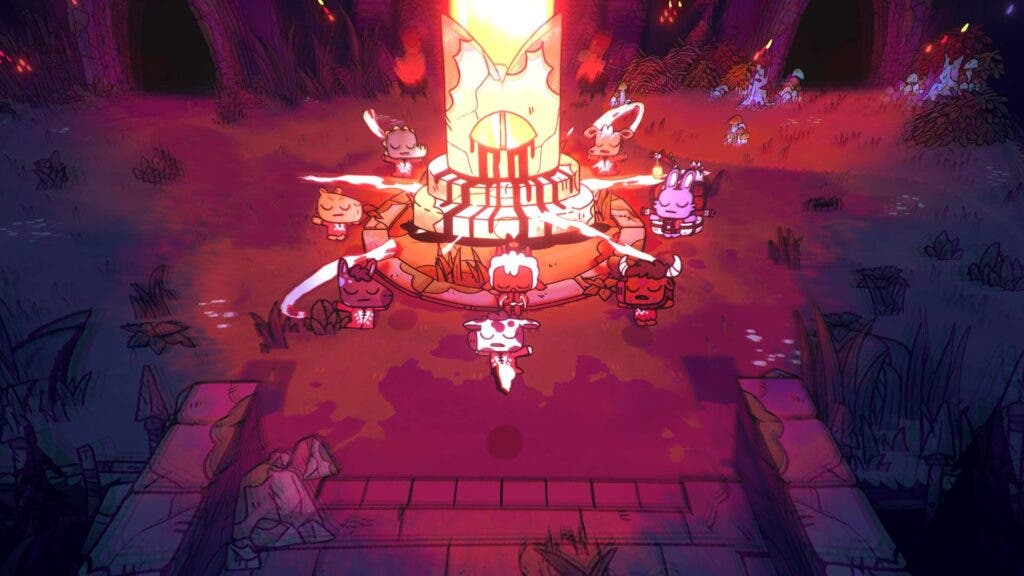 You’ll reap what you sow as you cultivate a cult following towards you goals. While it has many gameplay elements that are introduced over time, it can get overwhelming. This is a bigger game than it lets on, that said, I enjoyed engaging with everything it had to offer me. Cults have never been cuter, and the art style is a perfect match for the personality with such dark undertones that many will flock to. Cult of the Lamb is every bit successful as a roguelike as it is a colony management sim for a truly rich experience.